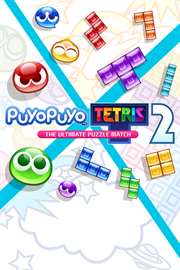 In 2017 I reviewed and enjoyed Puyo Puyo Tetris for the Nintendo Switch.  It’s a great mashup for fans of either or both classic games. With the ability to play against four players locally or online, you’re bound to have a lot of fun with this follow-up.

If you’re new to either Puyo Puyo or Tetris you can learn beginner, intermediate, and advanced playing techniques in the Lessons area. Lessons for the Fusion and Skill battles are also available for newcomers. Though the gameplay mechanics are different for each game mode, the condition for losing (having your screen fill up with Puyos or Tetrominoes) is the same. In Puyo Puyo you have to match up similarly colored Puyos to clear them while in Tetris you have to completely fill all of the empty space in a line to free up space in Tetris. The option to intermingle both games by switching them back and forth or playing them simultaneously is possible in this title.

Strong Points: Fun and challenging gameplay; nice visuals and voice acting
Weak Points: You’ll have to be patient to find a match online
Moral Warnings: Some of the characters are mischievous; there are references to tight outfits but you can’t really see anything

The story mode of Puyo Puyo Tetris 2 begins with a character named Marle whose memory is foggy but she knows that her powers are meant to serve the world. After hearing an evil laugh, you’re introduced to the character you’ll be playing, Ringo, who finds all the peace and quiet boring. As soon as she mentions that she wishes her friends would appear from the sky to liven things up, that’s exactly what happens. However, everyone looks familiar to each other but can’t put a finger on who they are exactly. In order to knock sense into everyone you’ll have to settle things with Puyo or Tetris battles. And so the adventure begins…

Along with the campaign are several quick play modes including:
Versus - Each player is free to select either Puyo Puyo or Tetris.
Skill Battle - Create a team and keep going until you run out of health.
Swap - Play two games at once as Puyo Puyo and Tetris swap as you play.
Party - Your goal is to finish with the highest score as you gather power-ups and enjoy the infinite lives.
Fusion - Contend with Puyos and Tetrominoes in the same game!
BigBang - How fast can you clear preset Tetromino and Puyo patterns?

The single-player challenge mode has six categories of its own such as:
EndlessFever - Can you clear preset chains within the time limit?
EndlessPuyo - Puyos keep on coming, can you handle them all?
TinyPuyo - Same great game but now in various sizes!
Sprint - You must clear forty lines as quickly as possible.
Marathon - Clear one hundred and fifty lines with the highest score you can muster.
Ultra - You have three minutes to get the highest score possible. 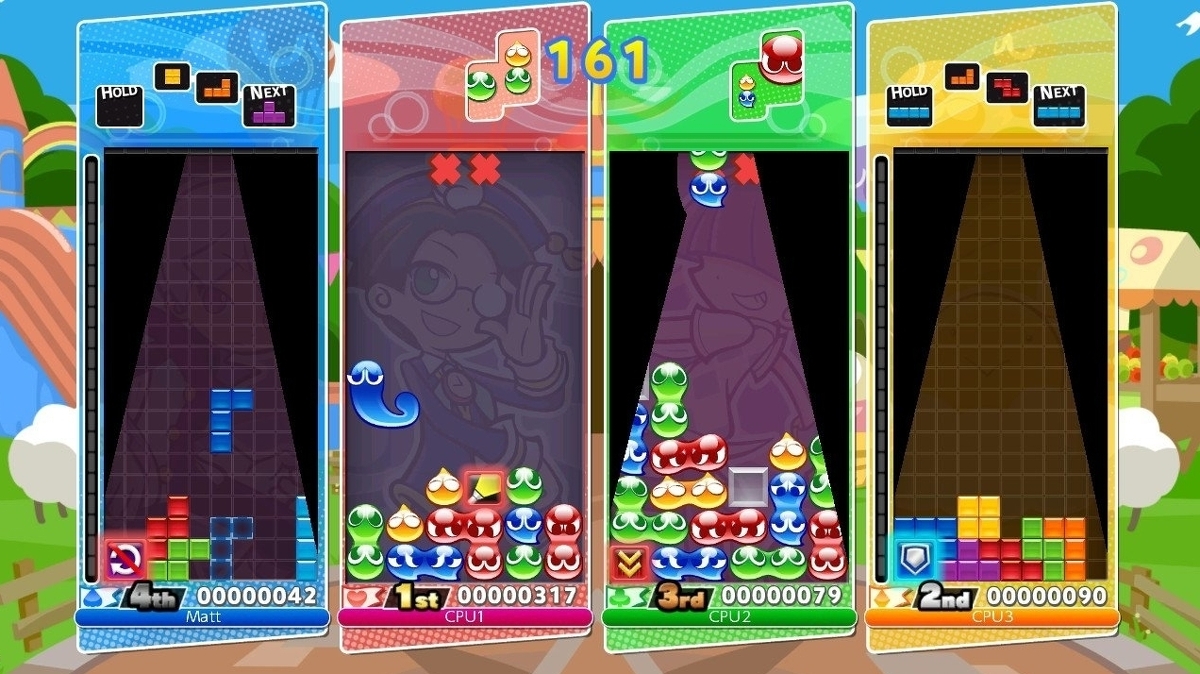 You can play these modes with the competent AI or with some nearby friends. I like how there is an auto AI setting that adjusts to your skill level. Online matches are doable, but it may take a couple of minutes to get a match setup. PuzzleLeague consists of ranked matches while FreePlay is for casual players looking for unranked games. Along with versus battles you can do ChallengeRanking where players complete solo challenges and see how they rank against everyone else online. BossRaid is another mode where players team up to takedown bosses. After every battle, players are invited to share their replay for them or anyone else to watch.

Like any online game, you may come across users with inappropriate usernames. Dialogue before matches consists of selecting a preset conversation bubble like "Let's do battle!". The single-player campaign has references to tight clothing but the characters are all modestly dressed.

If you enjoyed Puyo Puyo Tetris, Tetris, or Puyo Puyo, you’ll definitely want to look into Puyo Puyo Tetris 2. It’s a great party game to play with friends and random people online. Given the family-friendly nature it can be enjoyed by players of all ages. There still are gamers playing this title online, but you may have to wait a bit to get matched with them.