There are many great games that are considered to be essential when it comes to owning a Nintendo 3DS, and I can say, without a doubt, Tetris: Axis is one of them.

For those who don't know what Tetris is, It's a puzzle game created by Alexey Pajitnov back in 1984. The game uses a 10x20 grid, with differently shaped Tetriminos (blocks) dropping from the top of the board. The object of the game is to create horizontal lines using the shapes. Every time you do, the line gets cleared and every 10 lines will move you up a level. Each level increases the speed of the Tetriminos that are dropping and if the board fills up to the top, you will lose. So, the challenge is to get as many levels as you can until the board fills up.

Tetris: Axis comes with 20 enjoyable game modes to suit your taste. I hope you didn't lose your old AR cards because a few of them are AR games. If you have any friends that feel like they can defeat you in a game of Tetris, there is local wireless multiplayer that can fit up to 8 people. No friends nearby? You can take your skills online and face up to 7 different opponents. 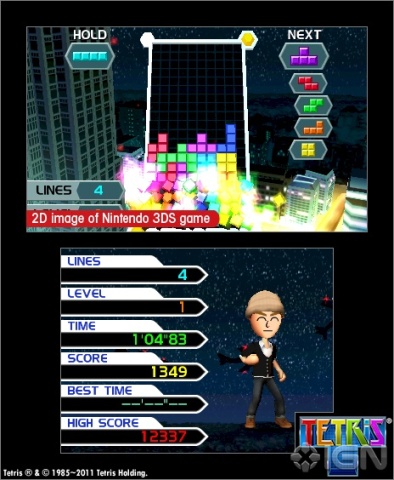 PMarathon mode is the same as it's always been, where every 10 lines you clear, you move up a level. Each level increases the speed of the Tetrimino dropping. You can save a Tetrimino at any point during the game and use it for when you really need it; this makes the game much easier.

There is the Computer Battle mode. In this mode, you face against 10 different AI opponents, one by one, in a battle game. This game mode is perfect for warming up before facing people online because it introduces to you all of the different battle items that you can use against your opponents. Randomly during the game, you will see a Tetrimino that is shiny. If you clear the line with the shiny Tetrimino, you get a battle item that you can use to your advantage. Also, when you clear lines, the Tetriminos that you clear will show up on your opponents side.

The battle items themselves aren't really as great as you would have imagined; some are just downright horrible. Hudson believes that because there is a microphone built into the 3DS, there should be an item that requires the player to blow on their screen. There is an item where the harder you blow, the more Tetriminos disappear. Also, there is an item that an opponent can use against you that covers your screen with fog. You then have to blow as hard as you can, repeatedly, until it goes away. I've felt so lightheaded a few times that I honestly thought I would pass out. There is also an item that switches your side with your opponents side and this item can be abused. Often times I've played against someone online who, the moment they get this item, fill up their side with Tetriminos all the way to the top and switch it around and get an instant win. Besides all of that, the rest of the items are basic and can be very helpful. 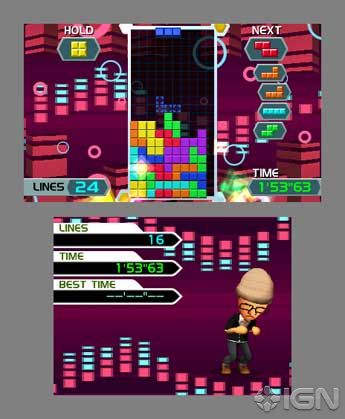 The Fever game mode is a fun and addicting one. The board gets changed to a 6x20 grid and you have 1 minute to clear as many lines as you can. If you clear a line that is one color, you go into color battle. Color battle switches you to a different board and gives you extra points depending how quickly you can clear lines; after a few seconds, it switches you back to the main board. The object of the game is to clear lines as quickly as you can to try and achieve the greatest score possible. The higher the score, the more coins you will receive. You can then spend these coins on different items that help you every time you play through it. You need to unlock most of these items through Spotpass and by completing certain achievements every time you play.

The final featured mode is Survival. It's very similar to Marathon mode except every few seconds there will be Tetriminos building up from the bottom and it uses the 6x20 grid. The more lines you clear, the faster it will build up. I enjoyed playing through this mode because it makes you think much quicker than any of the other game modes and I also like a challenge.

With these 4 being labeled as the featured modes, there are also party modes. The party modes are: Jigsaw, Shadow Wide, Fit, Tower Climber, Bombliss Plus, Stage Racer Plus, Capture, Master Mode and Sprint. I really enjoyed playing the party modes but they feel like mini-games and aren't exactly very challenging or original. For instance: Jigsaw is a jigsaw puzzle, Shadow Wide has you filling in a shadow with Tetriminos, Tower Climber is helping someone climb a tower and Bombliss is Marathon mode except some of the Tetriminos are used to make a bomb that can destroy many of the other Tetriminos on the board. The party modes are very welcome but they aren't as deep as the featured modes. There are also AR games if you feel like bringing the game to life in your living room. 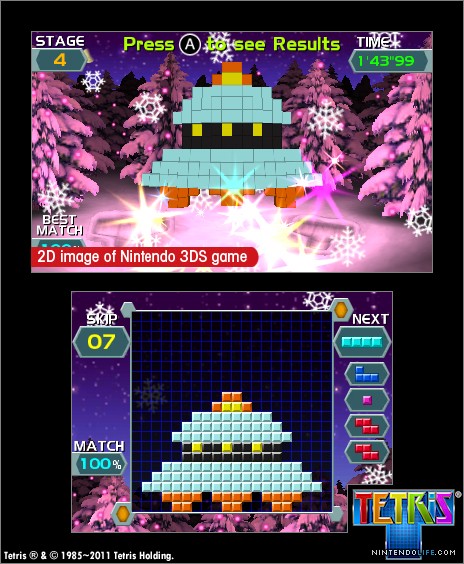 Tetris: Axis also has some customization available. For instance, you can import your Mii, dress it up, and choose a dance. While you're playing, you will see your Mii on the bottom screen dancing around. Also, you can select different designs for the Tetriminos and background for any of the featured modes. However, for some reason, the designs don't save after you stop playing the game and I have to change it back manually every single time.

Ever since Tetris: Axis came out, Tetris fans have been comparing this title to it's DS predecessor. In my own opinion, I find Tetris DS to be the better Tetris game when it comes to online multiplayer. The battle items in Tetris: Axis have, in my opinion, made the game less skill based. Yes, Tetris DS also has battle items but they aren't as game breaking as the ones you'll find on Tetris: Axis. Of course, if this doesn't bother you, Tetris: Axis is still a solid Tetris game to own.

All in all, Tetris: Axis feels like a worthy title in the Tetris franchise. Although there may be a few small issues here and there, I still enjoyed the game nonetheless. The 3D effects aren't anything special and I spent more time with the 3D off. Much of the popularity that Tetris received when it was released for the Game Boy was that it was on a handheld console. Playing Tetris: Axis reminded me of all those hours I spent playing Tetris while travelling. In the present day, whenever I have a little bit of spare time, I usually end up playing a few games of Tetris, and for those reasons alone, I believe Tetris: Axis is worth owning.