You kids... you and yer new-fangled Playstation Vitas and Yer high-powered gamin' PC's.  Ya don't know gamin' like we do.  In our day, we had cartridges and floppy disks!  We marveled at 16-bit graphics when they came out and thought, "man it don't get any better than this"—but ya scoff at what yer callin' stone age!  Ha!  Yer lookin' at the battle between Sony and Microsoft and sayin' it's a console war.  Ya don't know what a console war is.  Nintendo vs. Sega, now that was the Console War!  Well... I suppose it's our own fault fer not teachin' ya when we had the chance.  But that's not what yer here fer is it?  Yer here to read a gamin' review, right?  Well, sit down and make yerself comfortable.  Ya might learn somethin'.

Back in the days of dinosaurs and Windows 95, there were these guys that later called themselves Dungeon Dwellers Design. 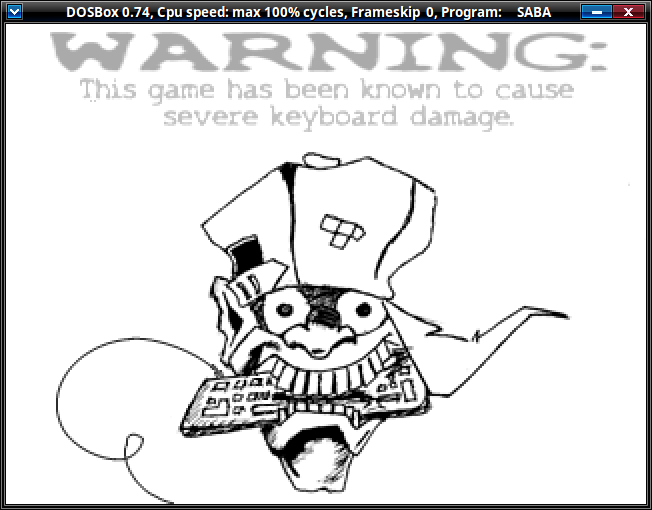 They'd already put out a few games, and their programming guy was getting burnt out rewriting one called 'Axia'.  Well, to break the monotony, he decided to write a Tetris clone.  He called up a couple of his musician buddies and an artist to draw up the graphics, and inside of a week, the game was finished.  By 1997, it became so popular, any web search fer 'Tetris' brought up the game.  Back then it was called 'Acid Tetris', and it was only a matter of time before the true blue Tetris company went after 'em fer copyright infringement over the name.  Ya still with me kids?  Good.  Now where was I...?  Oh yeah, mmhmm.  Well, Dungeon Dwellers Design was made up of college kids, so it was a couple years before they could fix it, but in 2002 it was re-released as 'Super Acid Block Attack'.  Same game but with a different title.  Now Super Acid Block Attack is a DOS game, ya remember those?  Well, DOS isn't really used anymore 'cept by us old timers, but you kids don't need to be left out.  Just drop down a little app called DosBox, follow the instructions, and yer shiny new quad SLI rig will get turned into an old Pentium with just a few mouse clicks and one teeny little command.  Now once ya got yer DosBox set up and have a folder fer yer games, drop down Super Acid Block Attack, extract it, and drop it into yer DOS games folder.  When ya fire up DosBox, cd into into the directory, which should be called 'saba' and run setup.bat.  Yeah kids, back in the day you had to type commands.  Now the setup utility gives ya yer sound options.  Since DosBox defaults to Soundblaster emulation, ya can either leave it to Autodetect or SoundBlaster Family, max out your Mixing Rate, enable Stereo sound, and make sure it's in 16-bit.  When yer done, just select 'Play Game'.  While yer loadin', ya see the Dungeon Dwellers Design logo and a funny warning that the game may cause 'severe keyboard damage' before it drops ya in the game.

You'll be dropped straight into a new game, but if ya need to change somethin', just hit the 'Esc' key to bring up the main menu and yer golden. 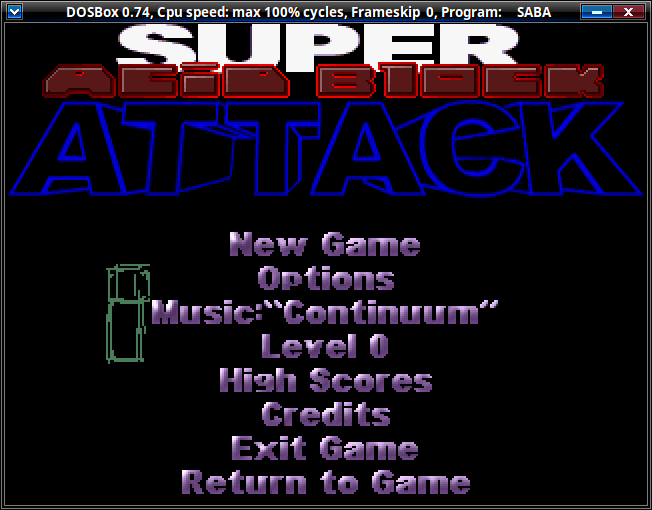 Here, ya have the option to start a new game, configure yer options, select from one of six music tracks, check the high scores, read the credits, exit, or return to the game.  Go ahead n' check out the Options menu.  It'll give ya the ability to adjust music and sound effects volume, and change yer keyboard controls.  Sadly, there's no option to use a controller, but yo find out just how easy it is with a keyboard.  Now the default keys are rather straightforward, but ya can change it to whatever ya want.

Once yer finished here, hit the 'Esc' key to get back to the main menu, select yer music, and start yer game.

While in-game, the screen pretty much explains itself.  On the left side of the playing window, ya have a small window showing the next block in queue, the high score, yer score, and yer current level.  To the right of the playing window is a list of available blocks and a running tally of how many of each have already dropped.  As ya move into the game, an animated smiley face appears to interact with ya.  Sometimes it's happy, but as you continue rackin' up the score, it starts gettin' mad.  If yer takin' too long to score, it'll act bored, but it'll drop an F-bomb when yer getting' close to losing the game. 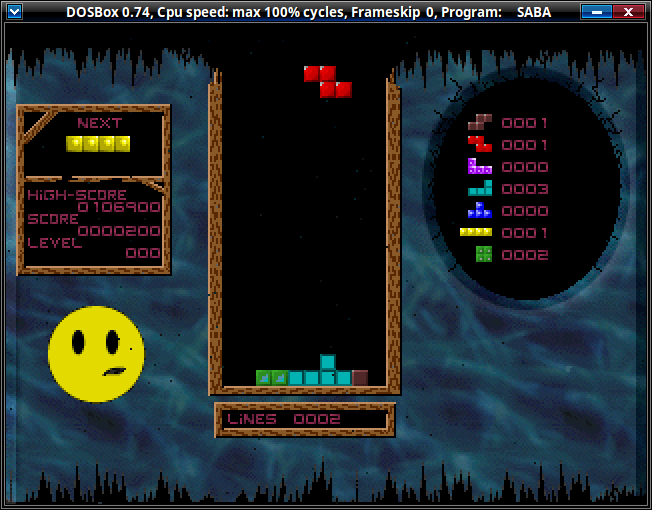 Overall, Super Acid Block Attack is even more addictive than its Tetris granddaddy, and the six music selections, which include a catchy techno-type remix of the original Tetris theme keep it groovy(do ya kids still say groovy?) into the wee hours of the mornin'.  At any rate, this game stands out as a classic example of pure gameplay and decent graphics that wouldn't have been outta place on the old Super Nintendo.   If ya want a crack at it, ya can pick up DosBox and Super Acid Block Attack here:

Well, I hope ya listen to the wisdom of this old timer and have a look-see.  In the meantime, do me a favor and get off my lawn.