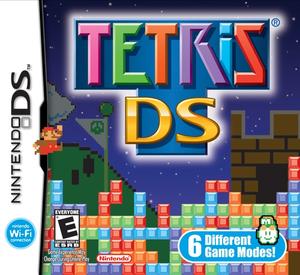 Tetris. The classic falling block game, invented by Alexey Pajitnov back on June 6, 1986, has defined puzzle gaming for a generation. Once Nintendo decided to make it the pack-in for the original Game Boy, Tetris' place in gaming history was unquestionably solidified. I have many great memories with the original game, in particular playing brutal cutthroat competitions with one of my good friends via the venerable link cable in between finals in Junior High on the old gray Game Boy. (Yes, I'm dating myself.) In 2006, Nintendo decided to release Tetris DS for their current best selling hand held, the Nintendo DS. What they delivered is a very good portable rendition of this timeless classic, with plenty of added material, and some interesting decisions to round out one of the DS's most desirable packages, for Nintendo and Tetris fans.

There are several modes of play in Tetris DS. There are single player modes, as well as local multiplayer and Wi-Fi (internet) modes. The single player modes include Standard, Catch, Mission, Puzzle, Touch, and Push mode. Each mode has a unique twist on the classic game play. One notable change from the start is that the styling of each game mode is unique. While the classic Tetris for Game Boy was conservatively styled with some classic music to place squares by, Nintendo took a decidedly different track with this game. Everything in Tetris DS is retro NES (Nintendo Entertainment System) themed, with each mode based on another classic Nintendo game. While this is great for long time Nintendo fans like myself, it can be substantially off-putting for those who are not huge fans of classic 8-bit characters, or those just looking for a Tetris game without being forced to hear Mario's theme.

Standard mode is classic Tetris, with a few variations. This section is themed off of Super Mario Bros. If you've never played Tetris before, the idea is fairly simple: There is a 10x20 grid, in which there falls from the top one of the seven possible tetriminos, or falling pieces, which you can guide or rotate to the bottom or another place where they can fill a hole. Once a full horizontal row is filled, it disappears, making room for more pieces on the game board. You lose by having the blocks reach the top. In Marathon mode, you win when you clear 200 lines, and in Endless mode (which is unlocked) there is no 'victory'. However, you have to be quite skilled to reach even 200 lines. In Line Clear mode you aim to clear a set number of lines. In VS. CPU mode, you play a virtual two player match against the CPU, where as you clear two or more lines at a time you throw some to your opponents play field. The CPU is quite challenging from about level 3 or so. Of course, Standard mode is quite fun to play; it's classic Tetris. 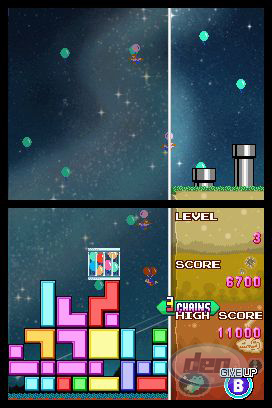 Strong Points: Excellent entry into the Tetris franchise with fantastic multiplayer; Nintendo fans will love the themes
Weak Points: Those who are not into classic Nintendo games may not enjoy the themes; the game could use a bit more customization
Moral Warnings: None

Mission mode is a Zelda themed mode where you are given certain missions, or tasks, to complete, one at a time. One task might be to clear three or more lines at once, while the next might be to clear a line with a certain piece. There are some really tricky missions in there as well. My favorite (or least favorite, when trying to accomplish it) are ones like 'clear 3 lines, skipping one' or 'clear x lines with only this piece', or the ever so pleasant 'clear x lines without rotating'. That last one can get nasty. The two variations are Marathon, where you keep playing missions on a timer until your screen fills up and you fail, or time trial where you are given ten tasks to complete, and you aim for the fastest time. Overall, Mission mode is pretty neat. It makes you think fast, and it's unpredictable. It can help you develop your Tetris skills as well.

Push mode is a Donkey Kong themed mode that is just great. It's two player only, so even when playing alone you have to play against the CPU. The field of play extends to both screens. You are on top, and your opponent is on the bottom. As your bricks drop, and your opponent's rise, they collide and land on either one of the two starting points, or another block, either yours or your opponents. If you clear two or more lines, the center of the play field moves towards your opponent. If any blocks are past the end zone lines, that player loses. So, your goal is to 'push' the other player back to the bottom. Though I find myself not particularly good at it, it's a really fun mode that stands out amongst many of the other new ones in this game.

Catch mode is a unique, Metroid themed mode where you move and rotate a 'core' that you attach falling blocks to. After creating a 4x4 section of blocks, they will explode in ten seconds, or you can detonate them early. You have a certain amount of energy that depletes when a block drops to the bottom, or when your bricks hit an on screen metroid that floats on by. As you destroy metroids, you progress to the next level. It's an interesting concept, though it can be difficult to figure out at first. It's kind of fun, though I think it's not as good as some of the other modes. 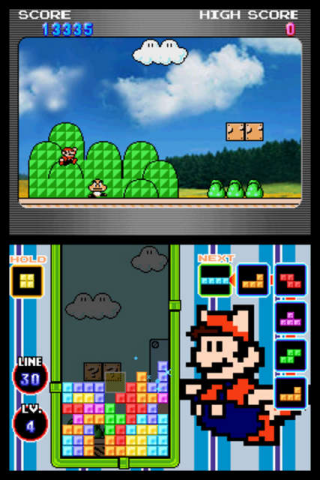 Puzzle mode is a Yoshi's Cookie themed mode where you are given 200 different prearranged screens, where you have to drop between three and five pieces into place to clear all blocks on the screen. You also don't place the blocks; there is only one possible place for each potential block and rotation that you can choose from. It's fun, and some are downright tricky. It's a great way to get you thinking of different combinations to help clear blocks. I will say I'm not a big fan of the theme music though.

Touch mode is a Balloon Fight themed mode that takes a pretty different approach to stackable blocks, and is challenging in its own way. Here, blocks are stacked up in a rather tall tower. You drag blocks around with the stylus, and move them to wherever you can to clear them out. So instead of falling blocks that you move to avoid creating a tower, you take a tower that already exists and clear it by moving the pieces. In some modes and difficulty levels, you can also rotate the pieces by tapping, but not always. In the Tower mode, you are given a tower as previously described, and your goal is to free some balloons on the top of the stack. You don't have to worry about clearing every last brick, as long as the balloon cage hits the bottom. Each time you play the playing field is randomly generated, so there is a fair amount of replay value if you like it. Difficulty levels four and five do not allow brick rotation. In Touch Puzzle mode, you are given a specific task, which are things like 'Clear all of the blocks', 'Get a 2-line chain', 'Clear all <block type>', and others. Some of them are truly nasty. Your blocks are predetermined on screen, and you have to drag them around to accomplish the task. There are 50 touch puzzles. I found a few of them to be extremely difficult. It's a really fun mode, though. Both touch modes are fun for something different, though I don't think a game based on this mechanic would do well as a standalone game.

While single player offers a lot, it's multiplayer that really shines in this Tetris package. Local wireless play supports up to ten (!) players using only one cartridge. That's just fantastic. You can play Standard, Mission, or Push mode games locally. You can also enable items, which you get throughout a match and you can use against each other during it. Unfortunately, there is no way to play with items when against the CPU, so I found practicing or getting used to items difficult. Wi-Fi mode supports either two or four players in Standard mode, with four players using items. There is also two player Push mode available. Wi-Fi worked flawlessly during my testing, and I was surprised to find all these years later that people are still playing it online.

The biggest gripe I have with this game is the seeming lack of options. Online, you are pretty much stuck with Nintendo's default game options; I hope you like two player without items, four player with items, or two player push mode, because there are no other options. No handicaps, teams, or anything else that local multiplayer offers. Also, while there is a way to access all of the songs that you have unlocked by playing the game, you can only listen to them. If you go through all of the trouble to unlock the classic Tetris song, why can't you play the game with that in the background? It sure would be nice. Also, as I previously mentioned, single player, or VS. CPU modes do not offer any of the options that wireless multiplayer offers. Also, there is a mysterious 'T-Spin' move available during gameplay, and it's not well explained at all. 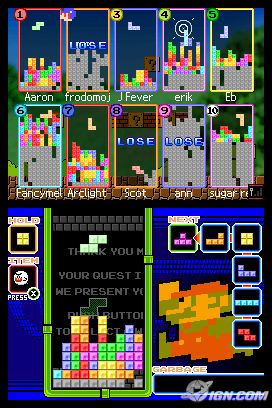 The graphics in this game are pretty much what you expect from a Tetris game, in that they are blocks, and they look like them. The backgrounds are all inspired by older 8-bit Nintendo games, so those aren't particularly modern looking either. The graphics do what they are supposed to, and are styled well. They are otherwise nothing special.

The sound effects and music are of good enough quality, assuming you like the tunes that they are based on. They are all well done jazzed-up remixes with a little bit of extra beat to them. If you like Mario themes, you'll like playing Standard mode. If not.. you might want to find another Tetris game. As I mentioned before, I didn't find Yoshi's Cookie theme particularly inspiring. It's mixed well enough; it's just not my style. Otherwise, I can't complain about the music.

From a Christian perspective, this game is squeaky clean. There are explosions when the Metroid themed Catch mode blocks detonate. There's really not a whole lot to say here.

Tetris DS is a really fun Tetris game, taken to the next level on Nintendo DS. It's probably the best version to Tetris to date, and its multiplayer is unmatched for any Nintendo system to date. It's a Tetris game for Nintendo's Tetris fans. Though a few missing features here and there are a little frustrating, it's a great entry to the series. If you already love Tetris, it's very much worth considering. If not, it won't change your mind.

This game has long since gained cult status among Nintendo DS owners. As a result, used prices are through the roof, well over original retail, and most copies online are actually pirated copies. If you are looking to buy this game, either buy locally second hand or be very discerning when purchasing online. Any copy that says 'only works on DS or DS Lite' or 'Not for DSi' automatically consider it an illegal copy.