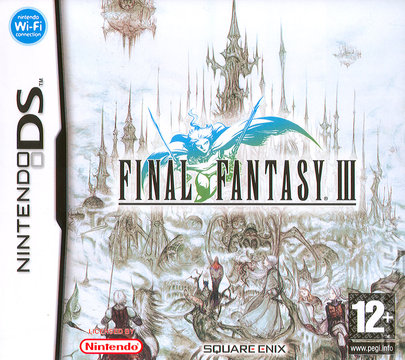 The story begins with four young orphans exploring some ruins after an earthquake struck close to their home town of Ur.  In their travels, they are summoned by the Crystal of Light who imbues them with its power to aide them in defeating the forces of darkness.  In order to defeat the enemy, they must harness the powers of wind, earth, fire and water.

These crystals are scattered across various continents that will require canoes and airships to reach them.  You’ll have to explore various caverns and locate towns and people spoken about in folklore.  Of course, when you finally locate the crystal it’s protected by a boss that wants to make sure you’re worthy to harness its power. 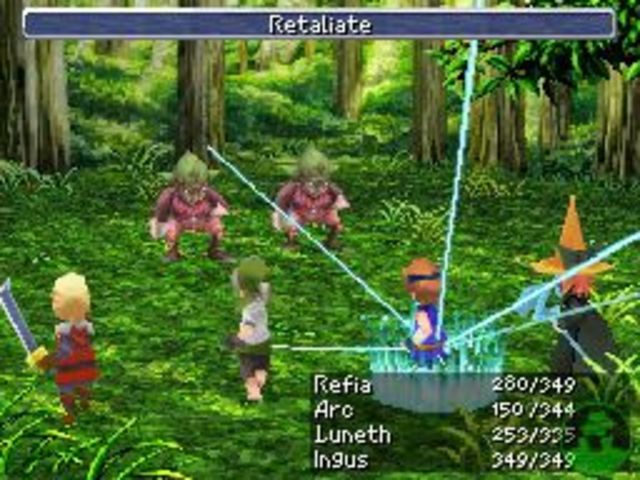 Enemies are hidden and they are lurking outside of towns and inside of caves and dungeons. The battles are completely random with the exception of boss battles which are triggered by stepping on key tiles or by picking up treasure or quest items.  When in battle, you have the choice of attacking, doing a job specific move, using magic, using an item, changing position/equipment, or fleeing.  If you win the battle, you will get some money (Gil), experience, and occasionally some loot.  After you gain enough experience you will level up and your attributes will increase automatically.

There are two forms of leveling up in this game.  Your character has a base level and a job level.  The more time you spend in your job, the more proficient you become at it.  You can change jobs as you see fit, but there is a cooling off period where your attributes are gimped for a certain number of battles.  At first you will start off as a freelancer that can use basic weapons and both white and black magic.   There are many magic based jobs that master in white, black, and summoning magic.  White mage specializes in restoring/healing magic while the black mage focuses on destructive elemental magic.  Many (but not all) enemies have a weakness to a particular element.  The black belt and monk jobs have no magic points and don’t require any weapons.

There are a few knight classes that focus on swords and staves.  The onion knight is a special class that is unlocked by sending several in game messages to your friend’s DS codes. You can send messages to AI characters that you meet throughout your adventure.  You will actually get a few replies and possibly unlock a secret quest.    The messaging system is a little tricky to use and sending messages to my husband's system required us both to be online and in it to actually receive messages. Perhaps I’m spoiled by the 3DS’ swap note software that delivers messages to you whether you're online or not. 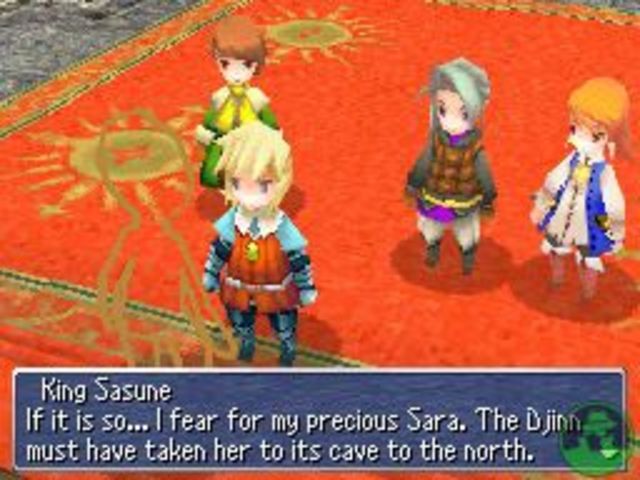 I was able to play this game on my 3DS just fine. The left trigger zooms in so you can find treasures not seen in the default camera view.  The right trigger brings up the menu.  During battles only one of the screens is utilized but they are both used when you're exploring.  You can save your game anytime when you’re outside.  If you need to save inside of a cave or town, you can use the quick save feature that will resume and delete the temporary save file after your game is loaded.  Closing your DS will put the game into a sleep mode so if you’re in a pinch, that’s always an option.  I’m not sure how that impacts your game play time though.  I put in close to forty three hours and ended my game with level seventy five characters.

Level seventy five was overkill and I didn’t see a need to grind much further. I’m not saying that there are no rewards for doing so, but my characters had over 6,000 hit points and my physical attackers could easily do 9,999 points of damage in each turn.  The mages are not as powerful, but their healing, buffing and elemental attacks hold their own.  Not to mention that their spells add some visual variety and eye candy to the battles.

The graphics are cutesy and even though the characters are adults they look like children in this game. As much as I hate to say it, the main character looks effeminate but the intro movie is well rendered and shows the much needed masculinity for him.  Each job has its own outfit and many of them are appropriate but the Devout’s outfit with the white hoodie with cat ears is a bit over the top.  What’s worse is that outfit was worn by a male character in my party. 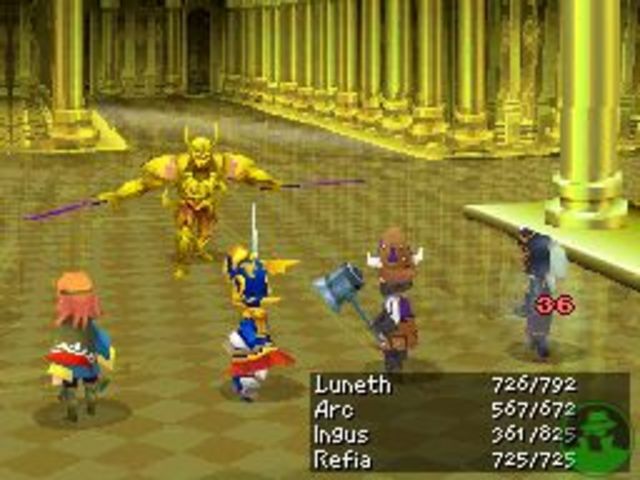 The character animations are fluid and well done.  The cut-scenes show proper emotion and give depth to the characters and greatly add to the story.  There’s a wide variety of monsters and they gradually get tougher as you progress in the game.  You’ll also notice that some of them get recycled with a different name, color, and attributes.  Some of the names kind of poked fun at this and the “new” monster’s name would be the same as the previous one with “clone” after it.

While the sound effects are decent and get the job done, the music is where Final Fantasy games shine.  The battle music gets your adrenaline pumping and the town music is calming and peaceful.  Some areas have their own music like Salonia and the Crystal Cave.  The music is composed by Nobou Uematsu, the same genius behind the scoring of the previous Final Fantasy games.

Overall Final Fantasy is a wonderful adventure that is fun to play, watch and listen to.  The character development keeps getting better with each installment of the series.  Morally the only issues worth mentioning are violence and magic use.  There is no blood or gore and when a person dies, their body vanishes.  The last boss is definitely female but it's nowhere near as bad as future games featuring her. It’s a clean enough game that I let my kids play and grind my characters for me.  They enjoyed watching the boss battles too.

It’s a shame that it took so long for the United States to get this title.  Android users may still be out of luck in that regard.  However, if you have a DS or an iPhone, I recommend adding this game to your library.