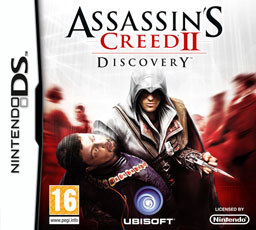 Assassin’s Creed has become quite a popular franchise. With four games released in the main series, three spin-offs, and another one on the way just within the last 5 years, no one can accuse Ubisoft of not releasing enough games. However, one could accuse them of some pretty mediocre portable titles. Although titles on home consoles have been solid, the games on portable systems have been sub-par to say the least. That changes with this game.

Developed by Griptonite Games (who also made Assassin’s Creed: Bloodlines, Assassin’s Creed II: Discovery is a stealth platformer which takes place 15 years after the events of its console counterpart. The game takes place in Spain during the 15th century with Ezio Auditore da Firenze as the main character, as he must stop the violence and corruption being spread by the Knights Templar. The Knights Templar, using the guise of the Spanish Inquisition, have begun to imprison and execute both members of the Assassin’s order and anyone else who dares to defy them.

Instead of trying to emulate the home experience, Griptonite Games has learned from their previous failure and have switched to a two-dimensional perspective. Ezio can still scale buildings, sneak up behind enemies, and engage in sword fights, but now the action plays out on linear two-dimensional levels. Levels are divided into normal, stealth, and chase sequences. Normal levels have no rules; so long as you get to the end or complete the objectives, you can accomplish them however you want. Whether you stick to the rooftops to remain undetected, or run along the street slaughtering anyone and everyone in your way, the only requirement is to get it done. Stealth missions narrow your approach; if you’re spotted more than three times, the mission ends. Timing, guard routes, and environmental awareness is everything. Chase sequences break up the monotony with some more fast-paced action. If you’re not in a full sprint, the arrows raining down from the sky and numerous guards will do you in quickly. These sections were fast and intense, reminiscent of the rollercoaster-like levels of Sonic the Hedgehog. 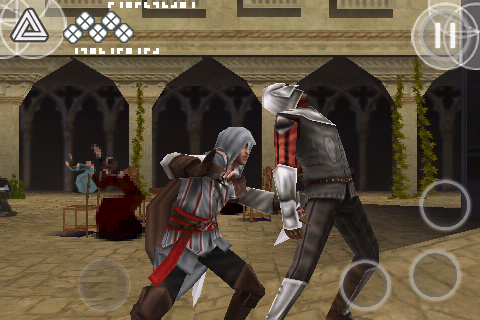 Apart from the switch to linear 2D levels, I’m overjoyed to say that gameplay is still true to the Assassin’s Creed series. Combat is present, though simplified, with the ability to block, parry, throw knives, attack, and jump attack. Fights aren’t as deep or lengthy as in the main series, but they aren’t broken either, and each fight only takes a few seconds to finish. In addition, stealth assassinations can be executed if the enemy is unaware of your presence. Walls can be effortlessly climbed and hiding spots are abundant. Despite levels being linear, they still felt open; there were plenty of towering rooftops, open balconies, and concealed alleyways. Gameplay flows quickly, and the majority of levels can be completed in less than 5 minutes, just right for an on-the-go system.

While I have come to resent the graphical limitations of the DS, this title makes me question whether the problem is the system, or the games I play. Characters are fantastic representations of their console counterparts. I was especially impressed by smooth assassinations and constant frame-rate. Very rarely did I encounter any slowdown. Animations are beautiful, and Griptonite even took the time to animate fabric to wave in the breeze. Buildings seemed slightly boxy, but I hardly ever noticed since both the buildings and the background were so detailed.

Anyone who has played a main title in the Assassin’s Creed series knows just how confusing and convoluted the plot is. Something about aliens, the end of the world, and a form of time travel—all the things I expect out of fan-fiction. Thankfully the developers avoided that by keeping the game based firmly in the past. Instead of switching between playing as Desmond in the present (using the “Animus” to access the DNA that holds his ancestors memories) and Ezio in the past, players remain as Ezio throughout the adventure. Now, this isn’t the most captivating tale I’ve been told, but at least I could follow it. There were even a few neat cameos by historical figures, and watching how Ezio was involved in history was interesting. 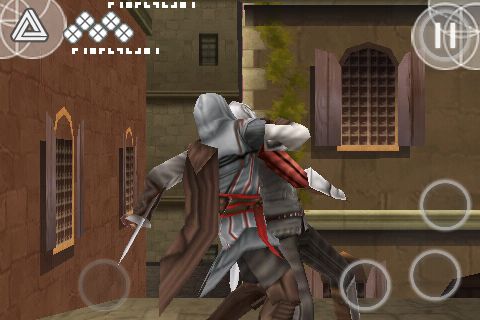 Of course, these characters wouldn’t be anywhere near as interesting if they weren’t voiced well. I’m not an expert on accents, but all of the characters seemed correct in their pronunciations and way of speaking. The quality was good and dialogue was frequent enough to the point where it didn’t feel like an afterthought. Sound effects fared just as well; many of them sound almost as if they were ripped straight from one of the main games. Music isn’t quite as praise worthy though, as it added tension, but wasn’t particularly memorable or noticeable.

With gameplay that at times can be as quick as Sonic the Hedgehog, you need controls that react as fast as the little blue critter himself. The directional pad is used for movement, the four face buttons are used for jumping, activating objects, throwing knives and attacking along with the right trigger to block. The left trigger is also used to activate stealth mode, which allows you to see further ahead and move silently. I did find movement to be a bit twitchy, but I was able to adjust and it actually began to help me by the end. No touch controls were necessary and I’m glad to see they didn’t try to cram some in; even the menus can be navigated with the directional pad.

In case the title of this game didn't give you enough of a hint, your character is an assassin, and he has the nasty habit of killing people. The morals of most of the characters are depicted as various shades of gray, and the hero isn’t an exception. Because even if killing dozens of soldiers wasn’t good enough, Ezio assassinates multiple (corrupt) religious figures throughout the course of the game. Thankfully, the killing isn’t bloody, and whether this is because of hardware constraints or to keep it T-rated, I’m glad they chose to keep it clean. However, I did notice one instance of cursing which was definitely not clean. It came and left quickly, so it was forgivable, but it seemed unnecessary.

For whatever absurd reason, this title has quickly become not only one of my favorite DS games, but also one of my favorite platformers in general. This game doesn't seem like it should be good; it’s based on a game meant for consoles, it changes the action to 2D, and all the other titles on portable systems have been mediocre at best, but Griptonite really did the best with what they had. Controls are tight (once you adjust), gameplay is fast, the graphics are fantastic, and there’s more than enough content to make this title worth a buy. This is an excellent stealth-platformer that is more than worth the price of admission, as long as you don't mind the killing.