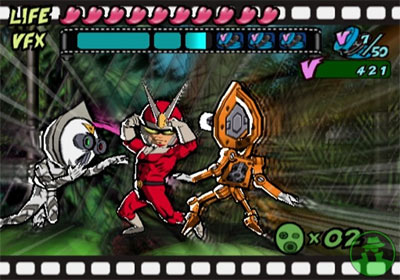 The original Viewtiful Joe made its debut on the GameCube in 2003, a comic-book inspired side-scrolling beat-em-up that boasted unorthodox cinematics, challenging gameplay, and a unique assortment of abilities. This old-school action game was a critical success, earning accolades for its style and substance; Viewtiful Joe was even ported to the PlayStation 2 in a marginally-successful attempt to bolster sales. A year later, Capcom released Viewtiful Joe 2, a sequel that picked up shortly after the events of the first Viewtiful Joe. Viewtiful Joe 2 (VJ2) is very similar to the original Viewtiful Joe (VJ), with Capcom opting for an ?if it isn?t broke?? approach to the franchise. While that means gamers won?t find this second installment as revolutionary as the first, Viewtiful Joe 2 is nevertheless a nice sequel to one of the best action games out there.

As has already been mentioned, Viewtiful Joe 2 is a side-scrolling action-platformer that involves lots of beat-em-up combat. The premise behind the game ? namely, that a boy named Joe has been sucked into the world of film and is now a superhero ? explains the two-dimensional style of a game that also has some rather interesting three-dimensional moments to it. The story, involving a new menace to the world, unfolds across seven chapters that are all parodied, in name and in style, after various blockbuster movies. Viewtiful Joe 2 is a fairly tough game, although it doesn?t feel quite as brutal as its predecessor. Even so, this game is no walk in the park. The kids mode is hard enough for most adults; the adult mode is a bear. And both modes present the same mind-bending puzzles that will occasionally have you scratching your head or running to GameFAQs. Helping to ease the pain is an array of special abilities (called FX abilities), most of which were featured in the original Viewtiful Joe. Joe can slow down time, move at mach speed, or strike a powerful zoomed-in pose that can bedazzle some enemies. Joe?s compatriot, Silvia, lacks mach speed but counters with her own special attack, a replay ability that lets her ?repeat? an attack for up to three times the damage? or, if the timing is poor, receive three attacks from an enemy. This brings up one of the new additions to VJ2, Silvia. The damsel in distress in the first VJ is now Joe?s partner in the superhero business, and her array of attacks gives her moderate distinction from her onetime rescuer. Aside from her replay ability, Silvia wields guns and can hit enemies from a distance, an ability that also lends itself to solving certain key puzzles. The player can swap between Joe and Silvia at the touch of a button, and by holding the Z-trigger a player can even build up for a combo attack that combines the skills of both characters. While it is a shame that Capcom did not incorporate two-player co-op as originally hoped for, the ability to swap between two characters is one of the most significant improvements that distinguishes this Joe from its predecessor. Viewtiful Joe 2 does allow for some character upgrades. The currency of the game are ?Viewtifuls,? which can be accrued through stylish acts of destruction against your enemies. These points can then be used to unlock new attacks or to purchase more lives or more hearts for your health meter, among other things. The original VJ was pretty short, although the difficulty made the game feel longer than it was. Viewtiful Joe 2 is a bit longer than its predecessor (perhaps 10-12 hours), and also adds mini-games into the mix, including a progressively-unlockable ?36 chambers? challenge that lets you test your Viewtiful Skills in a dojo-like environment. Notably, the 36 chambers are steeply difficult and I found most of them much tougher than the regular campaign.

The graphics in VJ2 reprise the cel-shaded cartoon style from the first incarnation in the series, and while there are no significant graphical improvements over the original, one might argue that none were really needed. The first Viewtiful Joe was a splendidly-stylish game that pushed the Cube hardware through its multiple camera shifts and full-screen effects. The same holds true for Viewtiful Joe 2, which looks great and runs silky-smooth even with lots of enemies on the screen. As noted, FX ability effects change the complexion of the whole screen and look really slick. In fact, slick is an apt word to describe the game?s artistry as a whole. The Viewtiful Joe franchise really defined how cel-shading should be done; with apologies to the likes of The Legend of Zelda: The Wind Waker and Tales of Symphonia, VJ2 continues the tradition of arguably the best cel-shaded artwork in gaming. VJ2 is an amazing creative effort, with unforgettable characters, diverse locations, and a variety of impressive enemies that explode into a satisfyingly-chaotic collage of robot parts when beaten up. The cutscenes are fully-animated and also look really cool, in addition to being well-choreographed.

Borrowing from the grand tradition of over-the-top superhero games like the original Viewtiful Joe and the Freedom Force RPG?s, VJ2 delivers some great lines with outrageously entertaining delivery. Some of the dialogue is corny, but it completely fits with the mood and works perfectly in this game. The voice acting is exactly what the game needs and can be downright hilarious ? even pressing the pause button can elicit a good laugh. The voice work is both top-quality and plentiful. The catchy, high-energy soundtracks from the first Viewtiful Joe are expanded upon in the sequel, and VJ2 retains some of the main themes ? including a couple of boss tracks ? while offering several new pieces as well. It?s a terrific blending of the original and sequel and while you will rarely have time to stop and appreciate the music, you?ll come to appreciate the ambiance it adds to the adventure. The sound effects, like the music, incorporate much of the familiar from the original VJ and add in a few nice new effects. VJ2 features some very gratifying sound effects, something especially apparent when beating up on the bad guys in slow motion.

The controls for Viewtiful Joe 2 are, like its predecessor, intuitive and responsive. The GameCube controller in particular seems a natural fit for this game?s control scheme. Notwithstanding a rather egregious typo in the manual?s control explanations, the controls are well-mapped out. The A button jumps, the X and Y buttons kick and punch respectively, and the FX powers are mapped out to the trigger buttons and the C-stick. (The Viewtiful pose ability can be activated by the C-stick but is also accessible by pressing the B button.) The Z-trigger controls the swapping of characters.

No framerate problems, glitches, or otherwise in this game. Capcom wisely built upon the original game engine, and it runs without a hitch.

- Cartoon Type Silly, Non-Deadly Violence (-2 pts) Viewtiful Joe 2 is meant to be seen as taking place in old films, and the violence of VJ2 consists primarily of beating up on cartoony robots and other enemies. There is no blood or gore.

- No foul language (-0 pts) - No sexual dialogue. (-0 pts) I did not hear any inappropriate language in Viewtiful Joe 2.

- There is no occult or supernatural environment in the game. (-0 pts) - Borderline magic (hard to tell if occult) is used by enemies, but not by player. (-3 pts) This was the most difficult category to evaluate and score. Like the movie ?The Last Action Hero,? the game revolves around the idea that a boy is sucked into an alternate film world. Unlike that movie, however, it is unclear in Viewtiful Joe if the reason for this predicament is the work of the supernatural or of science fiction, although the storyline seems to suggest the latter more than the former. If there are supernatural undercurrents in VJ2, they are never explicitly stated, and for that reason the environment score is as it is. Joe?s powers, likewise, are never really explained but are attributed to a special Power Rangers-style watch. On the other hand, a couple of the ?films? in which the game takes place do have supernatural references, and at least one of Joe?s enemies purports to draw his power from some sort of darker source. It is unclear whether or not this particular scene used occult magic, and this is, again, reflected in the score.

- Characters clothing is sexy or accentuates their sexuality. (-1.5 pts) Silvia is dressed in a tight outfit and Joe will occasionally refer to her as ?Sexy.? There is some semi-romantic interplay (and bickering) between Joe and Silvia but it is pretty light.

- No authority issues involved with this game. (-0 pts) - Good value decision making is required to progress in the game. (-0 pts) In general, the game promotes good values and good decisions. Viewtiful Joe 2 epitomizes the sort of black-and-white, good-versus-evil struggle that marked Silver Age comics. Joe and Silvia are incorruptible heroes who have a determined goodness about them, and there is a sense of self-sacrifice that permeates the plot. I also really liked how both characters? fathers are included in the plot as decent and involved, if imperfect, figures; one of the tacit themes of Viewtiful Joe 2 is the importance of family and of looking out for one another. Finally, Christian gamers will note that themes of temptation and redemption are both key parts of the game\'s storyline, particularly the endgame.

Within just four months of its release, Viewtiful Joe 2 saw a price drop to $20 due to lagging sales on both the PlayStation 2 and GameCube. This is unfortunate, given the quality of this game, but it also means that gamers can get their hands on this game for between $10 and $20. Gamers who played the original Viewtiful Joe may feel like this game is more or less a glorified expansion pack, but gamers who passed up on the original VJ might consider getting the sequel. It?s a very good, if very challenging game (gamers under 10 may find the challenges overwhelming), and it?s also clean enough to be appropriate for most people who are actually old enough to handle the game?s difficulty. Viewtiful Joe 2 is recommendable as an above-average action game both on secular and Christian levels.