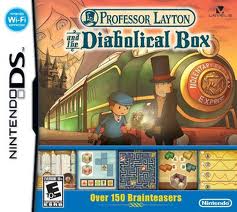 Professor Layton and his assistant Luke once again find themselves in another mind bending mystery.

The story starts with professor Layton receiving a letter from his old friend and mentor Dr. Andrew Shrader, saying he has been trying to uncover the mystery of the Elysian box. Which has a famed history of killing whoever opens it, and now he has at last found the box. Though it was his intention to finish his research before daring to open its lid, he confesses that his curiosity is simply overpowering. Andrew Shrader ends the letter saying if anything was to happen to him, please finish the research he started. Not liking the tone of the letter, Layton and Luke go to check on him, but it’s too late. Andrew Shrader was dead, but the box was nowhere to be found. However they did find a train ticket that had no destination. Professor Layton and Luke now set off to finish Doctor Shrader’s research, and find out who, or what killed him.

The puzzles have returned better than ever with the addition of the memo pad, but first the layout will be explained. When in a puzzle the top screen explains how to solve it, while the bottom screen will show you the puzzle, as well  as the hint, quit, submit, and the newly added memo button all neatly arranged on the right side of the screen. When a puzzle has you stumped the hint button comes in handy. The hint system is simple: there are three hints for each puzzle, and each hint costs one hint coin, though in order to get the second or third hint you must buy the hint before it. The other buttons are pretty self explanatory, though the newly added memo button will be explained. By pressing the memo button it will lay out a white transparent pad that you can freely draw on and make notes. I found this was a great new feature, though once you submit your answer your notes on the memo pad disappear. So you'll want to remember what you wrote down just in case you answer the puzzle wrong. Aside from the addition of the memo pad the art style of the puzzles has been improved, and now matches with the rest of the game very well. Also the puzzles now have a cast of recurring characters that appear in several puzzles throughout the game with different roles. I personally loved seeing these characters and reading their situation in each of the puzzles. Also every puzzle has a reward called picarates that is used for bonus content after you beat the game. The amount of picarates you gain after solving a puzzle varies on the difficulty of the puzzle, though if you answer incorrectly the amount of picarates you get for that puzzle decreases. So you’ll want to be sure of your answer before you confirm it.

When not solving a puzzle you will be on the Molentary Express and wherever it may go. Everything is 2D so there is only one view of each area. When in an area you tap people to talk to them. You can also tap various objects in an area, and some objects will drop hint coins. When you want to walk to another area you tap a shoe icon that’s on the lower right of the bottom screen; this will make arrows appear, then you tap on an arrow to go the area in that direction. You can find the in game menu by tapping a suitcase icon on the upper right of the bottom screen. Here you can save, replay puzzles, and read the Professor’s journal and get his perspective on things that have happened. In here are also three mini games that you get early on in the game. 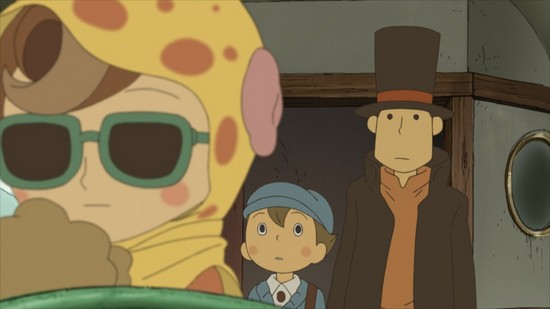 In one of the mini games you fix a broken camera that’s missing several parts. You collect the parts by solving puzzles throughout the game, which you can put together by rotating and placing the parts in the right place. Once the camera is fixed you can take pictures at certain areas; after you take a picture you can look at the photograph and do a puzzle where you spot the differences between the photo and the place you took it. By solving all of the pictures you will be rewarded in the bonus menu.

With the second mini game you give the chef of the Molentary Express's oversized pet hamster an exercise by getting him to take steps in his playpen. Starting out you will have a goal to get the hamster to take eight steps, after you complete that goal the hamster will get more in shape and you will gain another goal of steps to reach. To make the hamster take steps you place items that you get from solving puzzles. The hamster will only go after items that are three squares away from him, so you will have to make a path for him to follow, but the playpen is fairly small so it becomes quite challenging as you run out of space. Once you get the hamster in shape, you will get a reward in the bonus menu.

The last of the three mini games is the tea kit, and I am not kidding when I say this mini game can make you thirsty for tea. When using the tea kit you can brew tea using a combination of three tea ingredients. Though you don’t start out with all the tea ingredients, you’ll have to find some by solving puzzles. At some point in the game people will have problems that only a good cup of tea can fix. When making tea for them they will describe the tea they want, leaving you to find out what tea to make. Once you help a certain amount of people you will get a reward in the bonus menu.

The bonus menu can be accessed from title screen; from here you can access four other menus: In the first menu you can download free weekly puzzles, though the puzzles are no longer being added, so when you first download the puzzles you will get all thirty three of them. Unlike normal puzzles, the hints won’t cost hint coins and you won’t receive any picarats for solving the puzzles. The second menu is the puzzle index which is also accessible in the in game menu. The third menu is Professor Layton’s challenges, here you can take on some of the most challenging puzzles in the game. The last menu is the Top Secret menu, where you can unlock bonus content with your picarats after you beat the game. 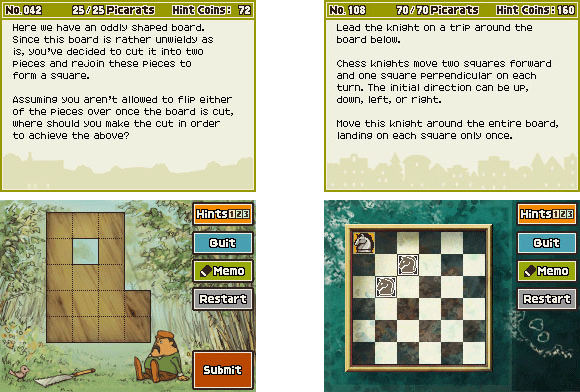 The music in this game sounds good and fits in where you are really well. There was also some music that sounds just beautiful, while the others are relaxing or created the atmosphere of where you are. The puzzle music is now remixed, though it sounds pretty much the same and is still repetitive. As far as the voice acting goes I found they made a huge improvement from the first game, as everything was well done, and the voices even matched their characters pretty well. There’s even some voice-overs outside of the cutscenes. Although you mainly only hear the voice-overs at the beginning and the end of the game, it's still a very neat feature. On a side note there is also a music player that is unlockable in the “top secrect” menu; it has all the music in the game except for the credits song which was replaced by a music box version which sounds good, but is not the same as the full instrumental version. As for the graphics it’s done in a wonderful art style, and will even look good on a 3DS. Also as I have explained before, the look of the puzzles now match with the rest of the game’s style.

Morality wise, things are better than the first game. A character from the first title called Ms. Riddleton returns and claims she's clairvoyant (basically claiming to be psychic), though her power is limited to gathering lost puzzles you have missed in the game. Wine is also seen in this game. In a watch tower you can see wine bottles scattered about, and there is a guy in the watch tower with a cup of wine in his hand and the bottle on the table in front of him. Also In a cut scene a duke you meet is drinking a glass of wine as he talks to the professor. Even though the guy in the watch tower and the duke are drinking wine, it does not affect them.

The story in this game was really good, and the ending was very satisfying. Even someone I know who does not like puzzles played this game for the story. The story itself took me 12 hours to beat with around 110 puzzles solved, and my friend took 15 hours with 93 puzzles solved. As of now I am pretty close to mastering the game and have around 144 puzzles solved, all three mini games finished, and a total of 18 hours on it. As far as replay value goes it somewhat depends, you aren't required to solve all the puzzles before you beat the game, but you can do them after you beat the game so it really depends on how many puzzles you solve on the way. Though there are the downloadable, and the "Layton's Challenges" puzzles that can be done in the bonus menu. Replaying the game from start to finish can be somewhat dull since you most likely will remember the answer to the puzzles. There are three save files so other people can play it without having to save over your file. I myself really enjoyed the game, so overall I would highly recommend this game to someone who enjoys puzzles.