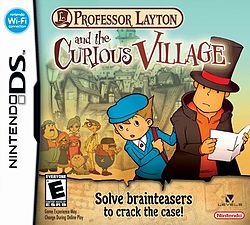 The story starts with Professor Layton (a renowned archeologist and puzzle enthusiast) and his assistant, Luke, driving to a village called St. Mystere where Professor Layton received a letter from the wife of a baron that died and had left his will saying the Reinhold family treasure, the Golden Apple, is hidden somewhere in the village, and who ever finds it gets his whole estate. So the Professor goes to help the Reinhold family find the Golden Apple, but everything goes horribly wrong. One of the relatives of the Reinhold family is murdered, and it is said every time the mysterious eerie tower in the village makes noise someone is kidnapped. It’s up to Professor Layton and his assistant Luke to solve the mystery of this curious Village.

Throughout the game you will be solving puzzles, lots and lots of puzzles. There is a huge variety of different kinds of puzzles you’ll be solving. Each of these little challenges have points called picerates, and you will be awarded these by solving puzzles. The amount of picerates you get for solving a puzzle varies on how hard it is, (In other words, the harder the puzzle the more picerates). but if you give a wrong answer the amount of picerates for that puzzle will decrease. Why go to so much trouble collecting picerates? It's to unlock bonus material after completing the game.

When you're on a puzzle the top screen will tell you about the puzzle and it's rules, while the lower screen will have a picture or scene of the puzzle. Depending on what kind of puzzle it is, you will be able to draw lines, slide or drag things around, or draw notes. If you're stumped on a puzzle you can use “hint coins” that can be found by tapping suspicious looking objects as you explore the village. You can spend up to three hint coins for three hints for the puzzle. The first hint normally tells you what you already know, while hint two and three are most of the time quite helpful, so if you're going to need a hint don’t count on spending only one hint coin. When you think you've gotten the answer to the puzzle you will ether press the “Submit” button or the “Input answer” button in which case you will write down your answer and then submit it. There is also a “Quit” button, where you will get out of the puzzle, but you can solve it again later. 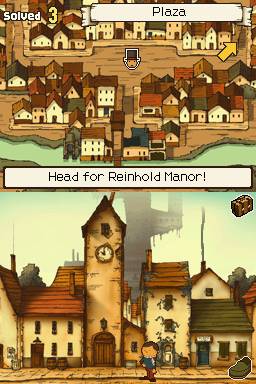 Strong Points: Excellent puzzles, a good mystery and story, and a great art style.
Weak Points: Could use some polishing, and some of the voice acting does not match their character.
Moral Warnings: Little bit of Revealing attire; Psychic themes.

Outside of solving puzzles, you will be exploring the village of St. Mystere. Every thing is in 2D so each area only has one view, and a  nice view at that. To walk to another area you tap a boot icon at the bottom right of the lower screen and arrows will appear, then it’s just a tap away to what area the arrows take you to. There is also a map on the top screen so it’s hard to get lost. You can talk to villagers by tapping on them, though they will most likely have a puzzle to tell you or will ask for your help solving one, though villagers are not the only ones who give puzzles. For example tapping on some objects in the game will start a conversation between Layton and Luke, which can result in reminding the Professor or Luke of a puzzle.

Another thing to keep note of is a suitcase icon which is found on the top right of the bottom screen as you're exploring, which is the in game menu. Here you can save and replay any puzzles you solved so far at the Puzzle Index. There is also the Professor’s Journal that you can read to get Layton’s perspective on things that have happened in the story so far. Aside from those, there are three other things in the suitcase as well: One is a ripped up painting and another is a bag of gizmos and the other shows you the Professors, and Luke's room in the village's inn. By solving some puzzles in the game some of them will reward you with a piece of the painting, a gizmo or a piece of furniture. These items are used to complete one of the three big puzzles; when you complete one of these puzzles, you will unlock stuff in the bonus menu.

On the title screen is the bonus menu, in it is a “Top Secret” button which is where you can use your picerates, and there’s a “Layton’s Challenges” button where you can try some of the hardest puzzles in the game, but the challenges must be unlocked by doing something in the main story. (Like for example, solving all the puzzles in the story mode will unlock three of Professor Layton’s challenges.) In the bonus menu there is also a “Weekly Puzzle” button, with this you can download a free weekly puzzle using wi-fi, but they stopped giving new weekly puzzles for this game at 8/10/2008, though you still get twenty six puzzles from this. (Since these are extra puzzles, you won't earn picerates and the hints take no coins.)

The story is good, and the mystery in it keeps you wondering until the last chapter. There’s someone I know who does not really like puzzles, but played the game for the story. When walking though the town at the start of a chapter while trying to talk to every one you see, you will most likely get bombarded with puzzles, though all the puzzles that are missed in a chapter can be found in a place called Riddleton’s shack.  There are points in the game where you have to have solved a certain amount of puzzles before you can progress any farther. So it’s pretty much either you solve the puzzles as you see each villager, or you go to Riddleton’s shack and clear the puzzles that have piled up in there. All the puzzles were fun, but there were a few that were a pain to solve, and about three of the puzzles were outrageously hard to solve, and the hints didn’t give much help with these. These three puzzles are optional though, so you can come back to them whenever you think you might be able to solve them. The controls are simple; you do everything in the game using just the stylus, which is nice since you can play with the stylus in one hand while eating a scone in the other. 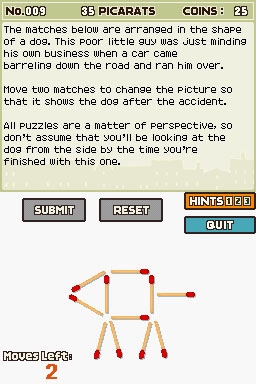 Sadly though, there are some moral problems, In one of the puzzles there are cards on a table and a barmaid in the puzzle's picture, but the barmaid’s dress does not have the best coverage; this puzzle is not optional. The other puzzle is a wi-fi downloaded puzzle called “The Egg-nigma” that has a rather odd guy with low coverage; but the good thing is this puzzle is completely optional and there is no reward for solving it. There is a self proclaimed fortune teller in the village of St. Mystere, but you don't have to talk to her. There is also another villager called Ms. Riddleton; who claims to have a psychic power to draw lost puzzles to her. Though both these characters claim to be clairvoyant, a later revelation makes it very unlikely that they are.

The graphics in this game look really nice (even when stretched on a 3DS), and it has a wonderful art style. My only complaint is some of the villagers look pretty weird, but not ugly, but oddly designed nevertheless. Throughout the game there are also some fully animated cut scenes, though quite a bit of the voice acting is not quite executed well. In some cut scenes the sound effects seem to be too loud, and would have been better off not in the cut scene. The music in this game is very nice. Though there are a couple tracks that can be hard to listen to, there are a few tracks that really excel. The music that plays when your doing a puzzle on the other hand can get really repetitive since you will be hearing it a lot. I sometimes don’t notice the puzzle music since I am really focused on the puzzle, though there has been a time where I turned the sound down.

Over all, I enjoyed this game, it took me around eleven hours to beat the game with 100 puzzles solved, and it took the other person I mentioned around thirteen hours to beat the game with 82 puzzles solved. After you beat the game all there is to do is to find the rest of the puzzles in the story mode and solve Layton’s Challenges. After you solve all the puzzles in the game there is nothing else left to do, though there are three save slots, so if there are any friends or family that like puzzle games, you can let them borrow the game.

Though this game did have a few moral problems and suffers a lack of polish like many first entries of a series. It’s certainly not something to judge the whole series by.

Overall, this is a game I would recommend to anyone who likes puzzles, and a good mystery.