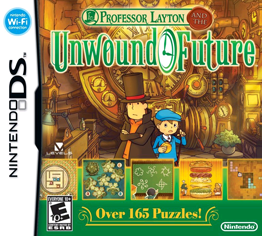 The story starts with professor Layton, and his assistant Luke receiving a mysterious letter that claims to have come ten years from the future, stranger yet the the sender claims to be Luke. The letter says the following, “Professor, I hope this letter finds you well. As for me, I am in quite a predicament. You see, the London we know and love has been thrown into absolute chaos. To complicate matters, the calamity I speak of does not take place in your time. This may be difficult to believe, but I am writing to you from 10 years in the future. I know this is a lot to take in, but I'll explain it all soon. For now, I ask that you head to the clock shop on Midland Road in Baldwin. I look forward to seeing you again.” Thinking that this letter may be connected to some recent strange events, the Professor and his assistant set out for the clock shop on Midland Road.

Solving puzzles remains very much the same as the previous game, though with a couple new features. While in a puzzle, the top screen will contain information of the brainteaser, while the bottom screen will display the puzzle itself. The bottom screen also holds the Hint, Memo, Quit, and Submit buttons. The hint button leads you to a menu, where you can unlock hints for the current puzzle with items called hint coins.

New to this game is the ability to get a fourth hint on most puzzles Though the third tip gives a big clue, the fourth hint will pretty much hand you the answer. Like the other hints, you must unlock the hints before it; unlike the other hints, the fourth will cost two hint coins rather than one. There is a limited amount of hint coins, so you’ll want to use them wisely. 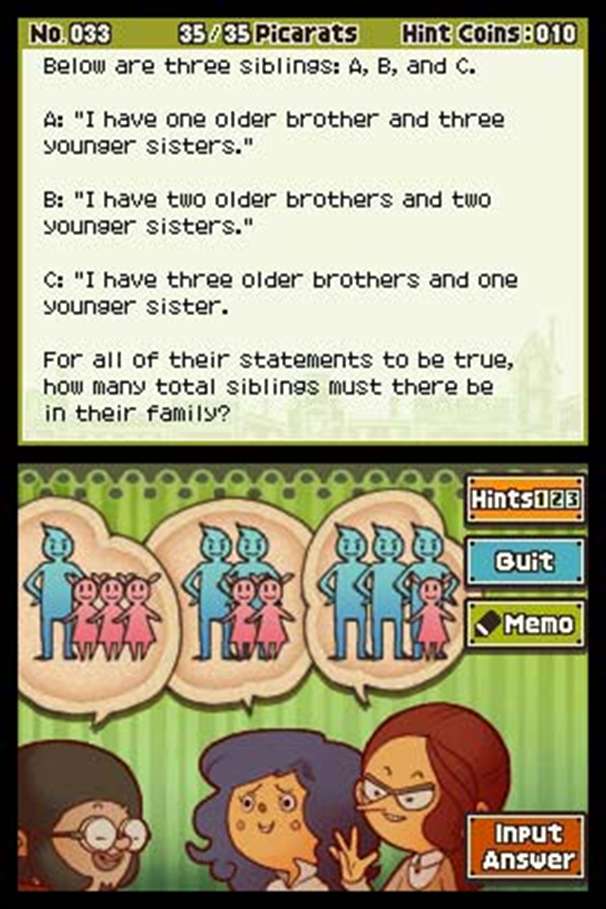 The memo button will bring up a partly transparent pad that overlaps the puzzle, so the puzzle is visible while leaving all of the bottom screen's writing space available. New to the memo pad is the option to write with several different colors rather than just black. You can now also reduce the size of the imprint you make with your stylus. Also, unlike the previous game, the memo will hold on to your notes if you answer incorrectly.

When exploring the streets of London the top screen will contain a map, while the bottom screen will show the area you’re in. You can talk to people by simply tapping on them, you also can find hint coins by tapping certain objects on the screen. To move from place to place you tap a shoe icon which will make arrows appear in the available directions, which then you can tap an arrow to move in its direction. 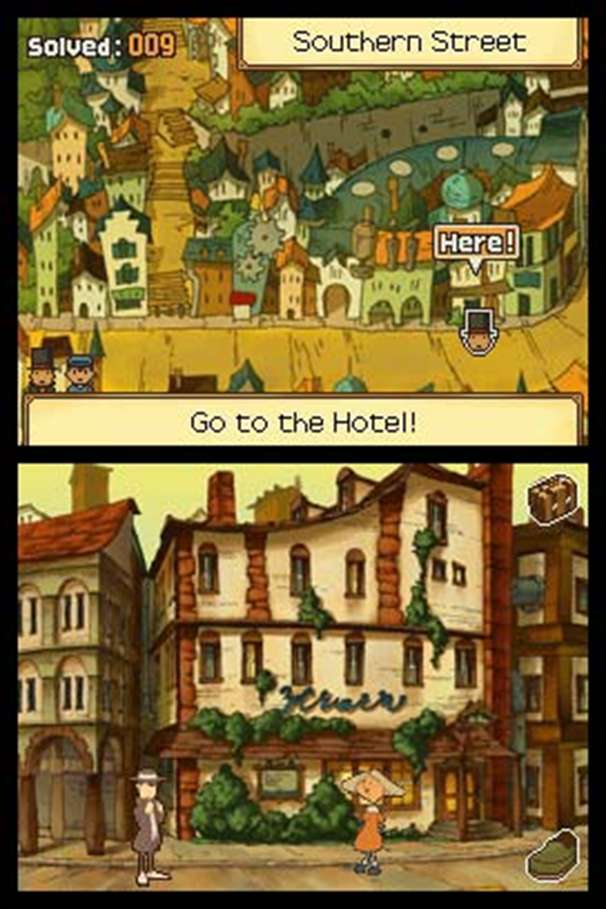 In the first minigame your goal is to pick up all the items on a square grid, and lead your toy car to the goal. To do this you must place various tiles in the right places. Tiles can do various things such as make your car jump over a single square, even if it contains an obstacle as water, trees, and rocks. If your toy car passes over a tile with an arrow on it, it will move in the direction of the arrow. Once your car has passed over one of your tiles, it’ll disappear till the toy car is finished running its course. The toy car has several different stages, that’ll unlock as you solve puzzles throughout the game. Once you have cleared all the stages there’ll be a little reward.

In the next minigame a parrot you find will start a delivery service. Unfortunately the items make it hard for him to fly, so to help him you must predict his flight path and make perches for him. To make a perch you simply connect two post with a rope. Although the amount of ropes you have are limited, also the position and angle of each perch will affect the trajectory of your parrot’s flight, though if the parrot lands on a flat perch, he will take off normally. As with the toy car minigame there are several stages. That’ll unlock as you solve puzzles throughout the game, and you’ll get a little reward if you clear all the stages.

The last minigame is of a picture book, which is missing elements in the story, so to restore it you’ll need to collect stickers that are found  throughout the game. When on a page the bottom screen will contain the picture, while the top will hold the text of that page. The text on the top screen will be missing a few words, though in its place a slight description of the sticker. Each picture in the bottom screen will have sparkles in certain areas. In those areas you can place a sticker, which in turn will replace the missing text with a word of what the sticker is. For example if I placed a red apple on a page, the missing text with a slight description saying “RED” will change to “apple.” When you place all the correct stickers in the right places, the story will be shown start to finish and you’ll unlock another story which will require different stickers. When you complete all the stories, you’ll get a little reward.

There is a bonus menu that can be accessed at the game’s title screen. From the bonus menu you can access four other menus. In the first menu you can download free weekly puzzles, although puzzles are no longer being added- you can still get all 34 puzzles when you press the download button. Unlike other puzzles you will not receive picarats, and the hints don’t use hint coins. The bonus menu also contains the puzzle index, (which is also found in the in-game menu) and Professor’s Layton’s Challenges, which contains some of the hardest puzzles in the game. Last but not least is the Top Secret menu, where with enough picarats you can unlock stuff such as pictures and a music player that plays tracks from the game, and more. 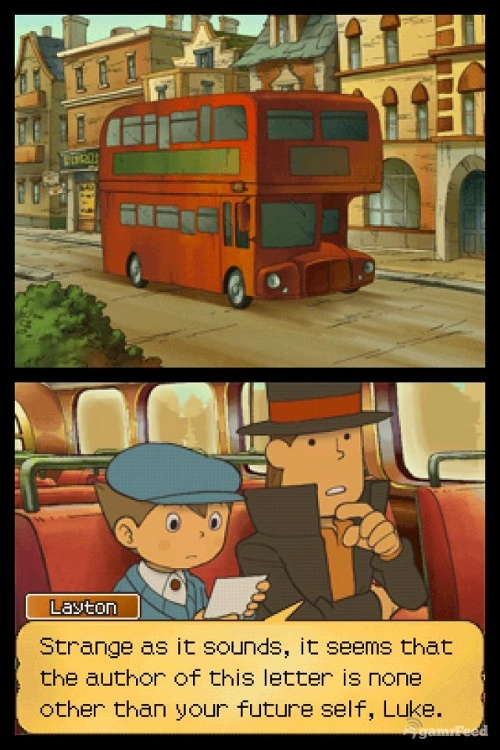 The graphics are wonderful. I myself personally love the art style, and since it’s hand-drawn it still looks great even when played on a 3DS. The cutscenes are well animated, and there are several more than the previous game. There are also a lot more voice overs outside of the cutscenes, and the voice acting is excellent and fits all the characters very well, though sadly with the exception of Flora’s voice which seems to have changed from the previous games for the worst. The majority of the music however is beautiful, and creates the atmosphere all too well. I have even gone to the bonus menu several times just to listen to the music. Also a nice change is that the music that plays while solving puzzles is now different.

Moral wise, there are a few things that are a bit questionable, down the line you end up running into a buff man by the name of Beacon, although despite his sailor appearance, he acts a bit like a girl and sometimes does girly gestures. You also run into person who appears to be drunk, although him being drunk doesn’t go very far beyond his appearance.

The story is beautiful, and the plot fascinating, and like most mysteries, it’s full of surprises. As with the past two games, my friend who is not extremely fond of puzzles played the game mainly for the story. It took me around 13 hours to beat the game with 110 puzzles solved, and my friend 18 hours with 102 puzzles finished. As of now I have played a total of 18 hours with 151 puzzles solved and all but one minigame cleared. As far as replay value goes it somewhat depends- you aren't required to solve all the puzzles before you beat the game, but you can do them after you beat the game so quite a bit of  it depends on how many puzzles you solve on the way. There are also the downloadable puzzles, and “Layton’s Challenges” that can be done in the bonus menu. Replaying the game from the start can be compared to rereading a book. You will most likely be able to remember the answers to several of the puzzles and the story’s plot, but even then it’s still quite enjoyable. Overall if you enjoy puzzles, mystery, and a thrilling story, I highly recommend this game.