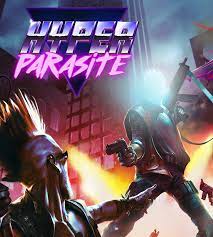 Thank you, Troglobytes Games, for sending us a review key!

After minutes of playing HyperParasite, I was ready to decry it as an absurdly-hard bore. The opening cinematic glitched. The game’s ‘80s sense seemed closer to Kung Fury and Far Cry 3: Blood Dragon than anything actually made in the ‘80s. Once I started playing, the framing of the player character as a powerful alien invader clashed with its in-game fragility. It’s difficult to say precisely when HyperParasite changed my mind. Make no mistake; it is absurdly hard. The titular parasite requires a lucky pickup to survive more than one hit, and most of the available hosts don’t fare much better under fire. The trick is that HyperParasite gives the player smaller goals while building skills for an eventual successful full run of the game.

HyperParasite’s world is in an uproar; an alien parasite is on the loose, capable of taking people over on its apparent mission to annihilate all that humanity holds dear. Fortunately for the player, they are that alien parasite. Unfortunately for the player, that parasite is a good deal less frightening at the start than that set-up would suggest. When the parasite dies, it’s back to the very beginning of the game for a new run.

HyperParasite is a top-down twin-stick shooter; when controlling a melee character, it becomes a brawler. The base parasite can shoot energy or take over enemy bodies. Most of the game will be spent in a host body to take advantage of their weapons and extra health. Aside from bosses, each enemy can eventually be taken over, and the player is able to use their weapons in nearly the same way the enemies do. Certain host abilities are necessary for unlocking hidden areas. Damage upgrades along with assorted turret and health items are found in destructible terrain and the shop in each act. 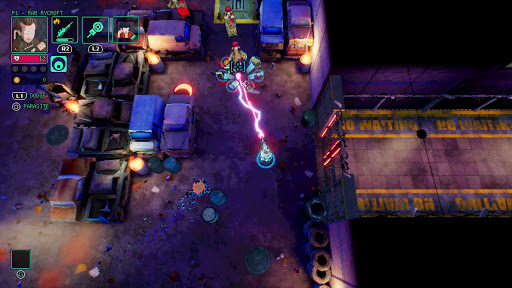 There are roughly a dozen character types in each of the game’s five acts, and the parasite can hardly take control of any of them when first setting out. Each act is a randomized grid of rooms to hunt through for upgrades, hosts, a shop, minibosses, alternate paths, and a boss chamber (a floor, in other words). A given enemy may drop a collectable brain when defeated. If the player returns the brain to the act’s shop and unlocks it with gathered currency, the parasite will be able to take over that enemy type the next time they are encountered. These unlocks - whether they allow you to take over more enemies or perhaps skip fights - carry over between runs.

Moving without a host is risky, as the parasite’s own body dies in one hit by default. Enemy host bodies provide protection and more effective damage. The player is meant to play this game aggressively, using their current host’s primary weapon and secondary special ability to mow through rooms of enemies. Still, even the strongest host bodies fall after a few seconds of careless positioning. As the game reminds in its loading screens, enemies are the player’s extra lives, so long as the parasite can get to a new host without dying.

The enemies are the game’s highlight. The joy is in the variety of enemies to take over. Basketball players, ghost hunters, a (teen) werewolf, and more populate just the first act, and the variety explodes from there. It can be frustrating to encounter these enemies without being able to possess them, but the slow process of collecting and unlocking brains gives the game a decent progression. The player slowly gains access to more enemies in each act while getting better at fighting the residents of, for example, a generic Asian-flavored town. If unlocking characters takes too much time, HyperParasite offers a “Born in the Wrong Decade” mode that unlocks all hosts and allows the player to start a run with any of them. 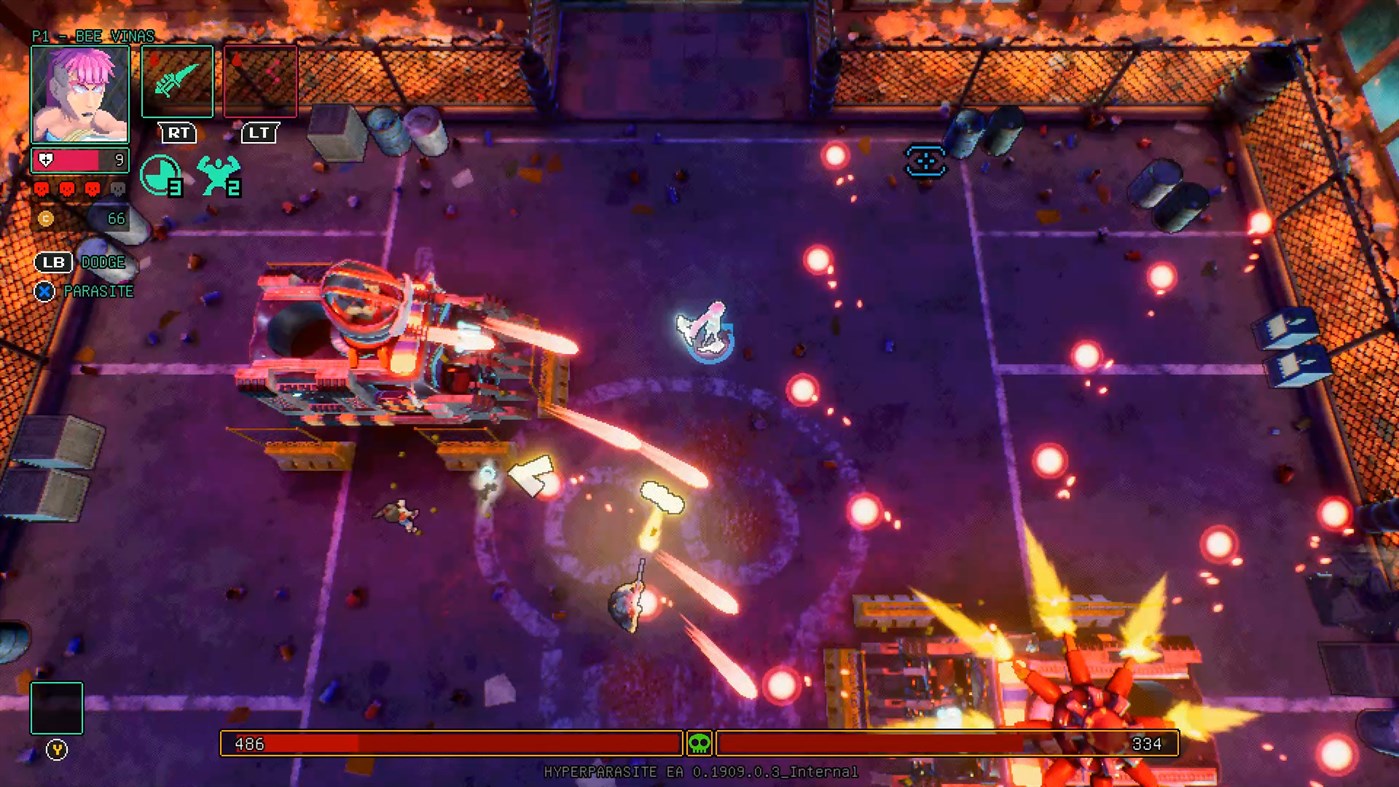 A “Wrong Decade,” the game implies, is any except the ‘80s. The repetitive synth soundtrack and narrator announcing “Devastation!” and the like while the parasite racks up kills did not endear me to the ‘80s trappings. Again, the characters are the strong point. Many are directly identifiable as movie icons. The second act is built around Big Trouble in Little China references. Some of my favorite host bodies are inspired by Ellen Ripley in her robot exoskeleton, Freddy Krueger and his claw, and the Predator with its spears. The player doesn’t need to appreciate the references to enjoy the varied weapons.

Combat needs the variety because it can become a slog. Wave after wave of enemies in the same room gets old, as does a boss fight that goes on for over ten minutes. Secret pickups and routes make these processes faster, and the game as a whole becomes easier as the player becomes more used to dodging fire and attacking at the right time. More irritating than the slog is the small text. Menus options, character blurbs, and weapon descriptions are annoyingly small and difficult to read. Worse than the font is the game’s instability. Graphical artifacts are not too bad; a run-ending crash, on the other hand, can make you not want to keep playing.

HyperParasite leans on its presentation, and mostly it holds up. The game’s controls are reliable. The graphics are clear for gameplay and references. The music is decent though repetitive. As part of the homage to classics from decades ago, HyperParasite is quite violent. The general mission of the parasite is to slaughter humans. Combat can be bloody, especially when it includes damage-over-time via bleeding. Occasional swearing and nonspecific sexual and drug references round out the gritty aesthetic. Perhaps the player will encounter the so-called “streetwalker” or a shaking car surrounded by floating hearts. Enemies’ magic use may be of moral concern as well.

Over time, my appreciation for HyperParasite’s difficulty and ‘80s references grew. It is a creative twin-stick shooter that is worth a look from fans of the genre. It may prove more difficult than desired for others. It’s a shame the game has stability issues; HyperParasite is otherwise a well-made game that, while sometimes ugly (morally and otherwise), is satisfying.