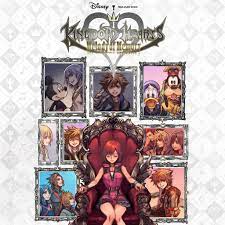 Square Enix is no stranger to odd rhythm game franchises, with Theatrhythm Final Fantasy being a quirky rhythmic adaptation of the JRPG series. As Final Fantasy has a memorable soundtrack with arguably all of its installments, it was a fun duo of 3DS games to play through. Come nearly a decade later, and Kingdom Hearts finally gets the rhythm game treatment, with Kingdom Hearts: Melody of Memory featuring songs from almost every title of the franchise. While it’s not the near-perfect musical celebration that Theatrhythm was, it’s still a solid rhythm game for fans and rhythm game players alike.

Melody of Memory’s story is framed through the perspective of supporting protagonist Kairi as she delves into her memories to find Sora, the main character who’s been missing since the ending of Kingdom Hearts III. In finding her memories, she recalls the events of every game so far (besides the mobile prequel, Union X), and players control the franchise staple Gummi Ship to travel to different worlds through the World Tour mode.

The meat of gameplay revolves around Field Battle Music stages, where a trio of characters will occupy three lanes. You have the Classic team which consists of Sora, Donald, and Goofy, the 358/2 Days team that has Roxas, Axel, and Xion, the Birth by Sleep team which has Aqua, Terra, and Ventus, and the Dream Drop Distance team which consists of Riku and two friendly Dream Eaters. It’s here where they must defeat Heartless, Dream Eaters, and Unversed while a song plays in the background. You can attack your enemies by pressing the L1, R1, or X buttons; they aren’t mapped to any specific character, but you’ll have to press two or all three buttons simultaneously if there is more than one enemy onscreen.

While your two sidekicks are fixed to the left and right lanes, your main protagonist can also jump and glide out of harm’s way by pressing Circle in order to attack aerial enemies or get gliding note targets. Your center character will also need to use ability crystals by pressing Triangle to activate spells and other offensive techniques to hit back. Missing a note will cause you to take damage, and if you run out of health before the song ends, you’ll need to try again. Thankfully, you can obtain items like potions that will help you out if you’re struggling with a particular song. 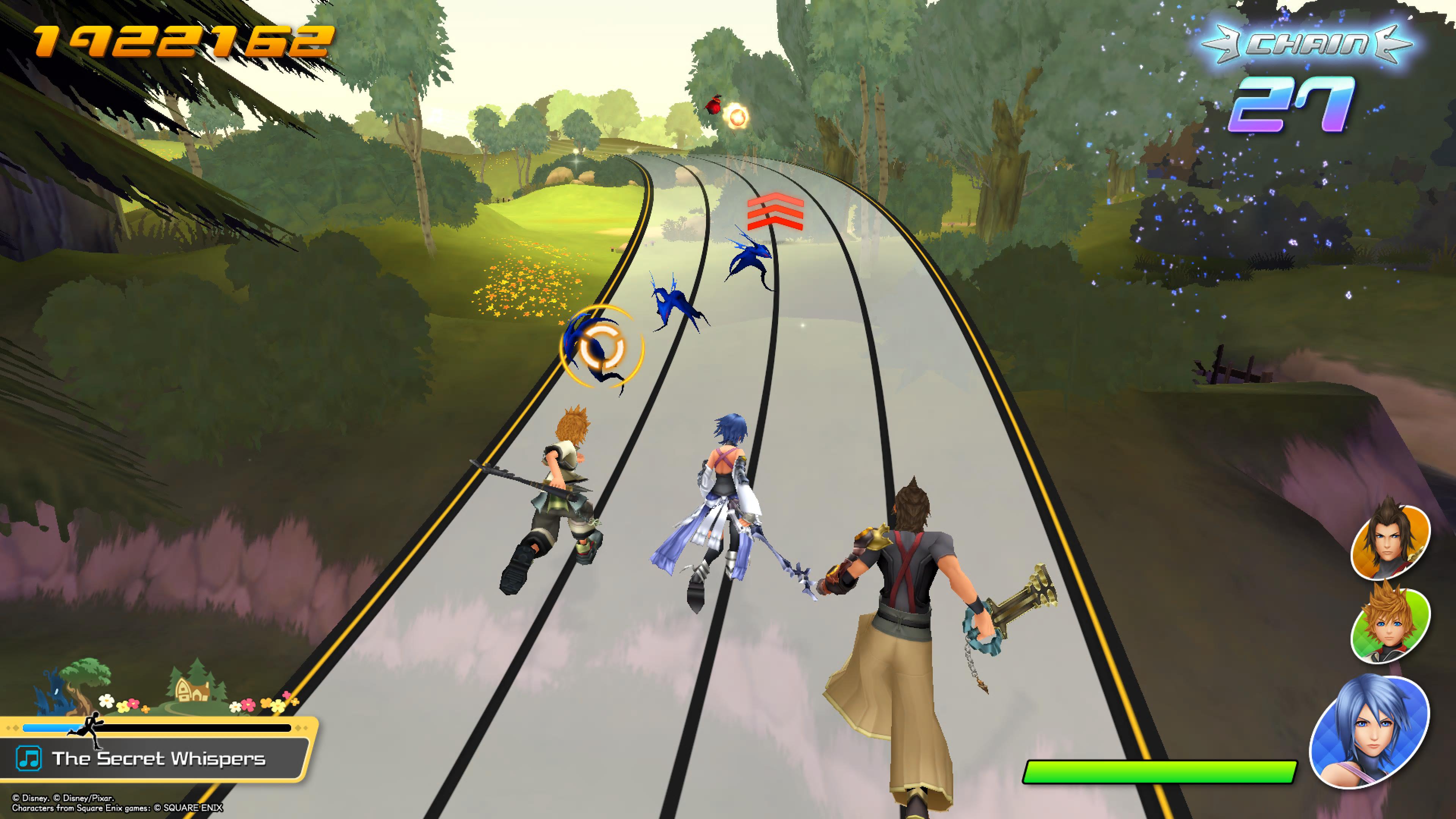 Moral Warnings: Bloodless violence against enemies during gameplay; Cutscene recaps depict onscreen character deaths; The song “Waltz of the Damned” has a context-appropriate expletive in title

At first, the button mapping feels odd, and there were times late in my playthrough where I would accidentally hit the wrong button while trying to attack multiple enemies. However, once you get through the first few songs, you’ll be able to acclimate to the controls. That said, it feels like Melody of Memory caters to casual rhythm game fans who are Kingdom Hearts diehards rather than rhythm game purists that live and breathe with hard charts. As a rhythm game player, I can normally tackle tricky songs with most of the extremely hard stages being nigh impossible for me; here, I was able to beat the unlockable One Winged Angel track on proud (the hardest difficulty) on my first try. Thankfully, there is a Performer mode that will increase the difficulty so that there are additional buttons that can be pressed for extra points. Alternatively, there’s a One-Button mode that makes the game easier on all three difficulties.

Other than Field Battle Music stages, you also have Boss Battles, which are the best parts of the game. It’s a shame there’s only four of them, since this is where the game goes straight into something like Hatsune Miku Project Diva. Enemies are replaced with notes which you’ll need to hit in tandem with the analog sticks in order to hit the boss; in addition, there will be phases where all you can do is dodge the boss, which creates a cool tension (even if it’s a glorified music stage). Finally, the third type of stage, the Memory Dive, has your character flying around the screen as you watch cutscenes play out in the background. These are generally the easiest stages and sport some cool visuals, especially if you’ve played the source material.

While the main singleplayer mode is fine, I especially liked the multiplayer options available. You have a co-op mode where two players can work together playing a song, but there’s also a competitive mode where you and an opponent are trying to rack up more points than the other person. By playing well enough, you can activate tricks that will impede your opponent by doing things like making enemies disappear or making the judgment timings stricter. You can toggle these on or off, but it’s a surprisingly fun experience to try and compete with others. For those that want to take part in this but feel intimidated by online play, there’s also a COM battle mode that functions identically and will grant some in-game bonuses should you beat your opponent.

I’m impressed with how many songs are included in Melody of Memory, with over 140 tracks featured within the game itself. They include selections from the mainline Kingdom Hearts games, as well as some extra supplemental material; you can even hear movie versions of Beauty and the Beast, The Circle of Life, and A Whole New World! You’ll be able to grab most of the songs by playing the main World Tour mode, while others will be unlocked by earning Rhythm Points in-game or by synthesizing tracks with materials found while playing through the worlds. 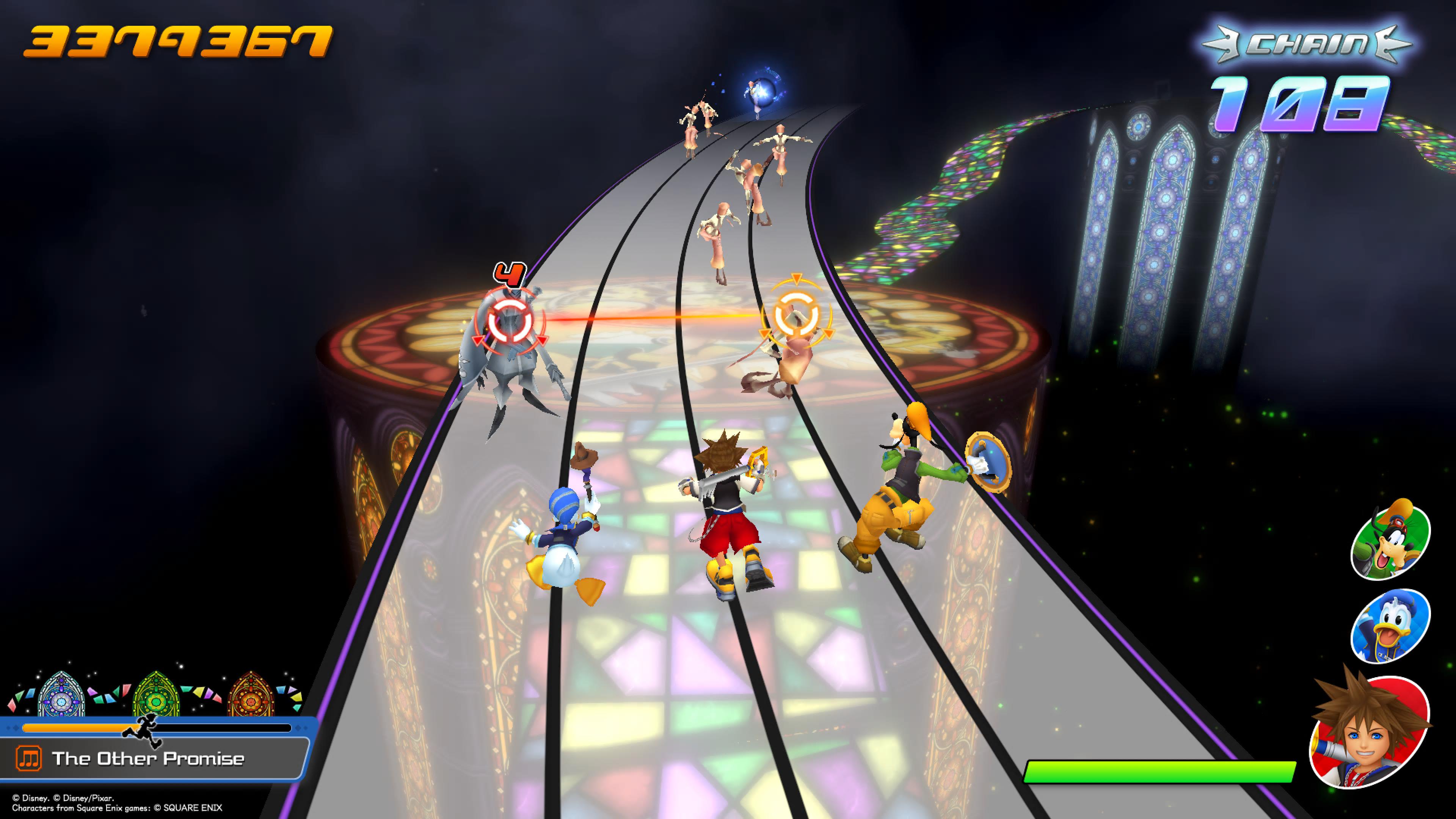 As for the songs themselves, they’re a bit hit or miss. Most of the PS2 era songs are based on the original MIDI tracks, which work fine until you get floored by the orchestral versions of the spinoff game tracks. There’s a lot of emphasis on Kingdom Hearts I and II (and their Final Mix iterations), as well as Birth by Sleep and Dream Drop Distance. This is fine since these games have the lion’s share of the series soundtrack, but it would have been nice to include more songs from Kingdom Hearts III and the other handheld titles. It’s been detailed that this game and III were developed around the same time, which means that a lot of III’s soundtrack couldn’t be utilized; the glaring omission of Face My Fears is a testament to this. (Hey, at least you get the full version of Let it Go with the vocals!) While the game runs at a smooth pace, some of the Memory Dives (especially during the endgame) have noticeable stutters with their background cutscenes. This is the only time when the game shows a jittery performance, and everything else is fine.

If you’re heading into this game hoping for more of the series’ convoluted story beats, you’ll need to check your expectations at the door. Kingdom Hearts: Melody of Memory acts like a Greatest Hits album with a new track or two at the end of it, and likewise the majority of cutscenes are recaps of the previous games of the series, as told by Kairi. These are great ways to condense the story into a CliffsNotes version if you haven’t played a game in the series, but will disappoint those who want to progress the story after III’s ReMind DLC campaign. You get a tidbit of where the overall plot is headed, but it’s literally half an hour at the end of the game.

In terms of morality issues, the game features some of the series trademark attacks and magic spells, though they are limited to a couple per team and are directed at the non-human baddies in the series. The violence is bloodless, though some recap cutscenes have onscreen death (most of which are obscured by light effects). That said, most character deaths depicted do come back to life. One song important to the Beauty and the Beast Kingdom Hearts II world has a context-appropriate swear, entitled “Waltz of the Damned”. This is to denote condemned enemies rather than a general expletive. Other than that, it’s a family-friendly entry to this mostly family-friendly series.

It might be a different game compared to what most series fans are used to, but Kingdom Hearts: Melody of Memory is a solid rhythm game that celebrates the storied musical stylings of the Kingdom Hearts series.