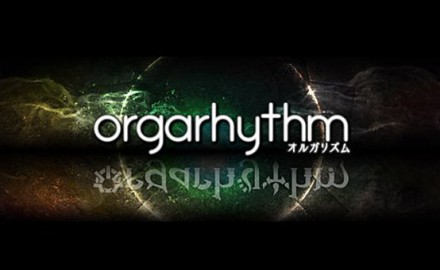 Orgarhythm is a unique blend of rhythm and strategy where you play as the groovin’ god of light whose dance moves attract elemental followers.  Since they’re elemental, they have strengths and weaknesses similar to the popular hand game, rock, paper, scissors.  The earth warriors (yellow) are weak to fire (red) but are strong to water (blue).  Fire is weak to water but powerful against earth and water dominates fire but succumbs to earth. Lizards drink water and Spock scorches earth.

If you find that hard to remember, there’s a nice little graphic on the upper right hand side of the screen in casual mode.  Besides the elemental limitations, there are four different kinds of attacks you can use: warriors, archers, catapults and sacrifice.   Warriors are best for short range combat while archers are good at distance fighting.  Catapults are powerful but require four units and take some time to setup.  Sacrifice sends your units to blow themselves up doing massive damage and ending their life at the same time.  One of the funniest trophies I got was called “Spirited Away” for sacrificing a unit that wound up doing no damage to the enemy.

There are many trophies in Orgarythm and some of them are rather pointless such as earning one for launching the game or winning/losing the first time.  You’ll get trophies for beating each of the twelve levels and for doing the tutorials.  I highly recommend doing the tutorials since this game is a little bit hard to grasp. 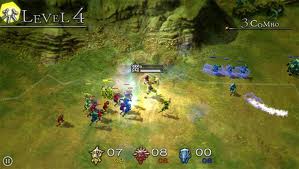 Strong Points: Fun combination of rhythm and RTS game play; co-op is great for tackling the difficult levels.
Weak Points: Sometimes it’s hard to find the beat and some of the levels are brutally hard.  The co-op helps but breaks the game difficulty wise.
Moral Warnings: You play as a god and your followers are your warriors who can sacrifice themselves at your bidding.

The rhythm aspect of the game takes both concentration and practice to master.  I used headphones to help me focus.  When a level starts, you’ll see the beats of the song pulsating over your god of light.  You have to use the touch screen to tap the beat in time with the song and then tap your warrior color and lastly their attack, again along with the beat of the song.  If you can manage doing this triple tap in sync with the song, the selected elemental warriors will level up.  The level cap is five.  If you screw up, they will level down.  Mess up twice and they’re back to level one.

If the timing of the on-screen beats perfectly matches the audio, and you get the hang of it, it’s not so bad.  It seemed like sometimes the beat wasn't clear enough, or maybe it was off somehow, and in order to do well you really have to watch the pulses on the screen much more closely to succeed.  It can be frustrating at times.  You have to concentrate to have any chance in this game.

As you get combos you’ll increase your support gauge and get a new menu option to heal or increase attack or defense of your units.  You also have the ability to slow down enemy units.  If your support gauge is full, you can call forth lightning and smite your foes.

The enemies are similar to your followers with their elemental classes and attack styles.  Some will be behind fences or on elevated surfaces and will require you to use your archers or catapults.  Every level follows the same formula: fight a bunch of weaklings and then face the boss at the end.  As intimidating as the bosses are, they usually have an attack or elemental weakness.  Oftentimes you’ll notice that their element changes, so pay attention and don’t miss a beat!

I’ll be honest and confess that the bosses usually handed me a big piece of humble pie.  Fortunately my hubby and I each have a Vita and were able to play in co-op mode.  Each person’s score is stored on their system and if a level is beaten, it’s reflected on both systems.  Co-op mode levels the playing field and makes the game much easier.  But not in every case, as the last couple of levels are brutally hard. 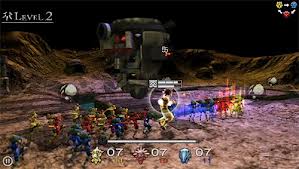 If you're really good at this game you can beat in a few hours.  You can extend your game play by trying again at a harder difficulty level.  If you have a friend with the game, you can also try versus mode.  Versus mode lets you combat another god with their minions to see who has better rhythm.

The better you do in the game, the more awesome and complex the music becomes.  The inverse is true as well.  The sound effects are nothing special, mostly grunts and groans from your god as he’s getting beaten up.

The graphics didn’t impress me either.  The colors in the game world are rather dull and bland.  The gods and warriors are not incredibly detailed but the bosses are unique and look daunting.  The animations, on the other hand, are pretty good.  The god of light can bust a move and it’s no wonder that he draws a crowd.

I'm curious how many followers Jesus would have had if he started break dancing while rapping parables 2000 years ago.  While this game doesn’t flow with Christian beliefs, I don’t feel threatened by a god that relies on his followers to defend his scrawny but grooving self.  The biggest problem is that you can send your followers to die for you via the sacrifice command.  The only other issue worth noting is that one of the female bosses had tight clothes on.  This game is relatively clean otherwise.

Moral issues aside, Orgarhythm is a fun rhythm/strategy game that shares some similarities with the Patapon series.  It’s quite challenging, but if you master it, you’ll only get a few hours of game time.  I think the $30 price tag is a little steep for that reason alone. Also, it's only available digitally so you won't be able to find it in stores.   Orgarhythm is a good pickup and play game provided that you won’t lose your concentration.  I have a couple of trophies and power ups that’d I’d like to unlock, but I’m not sure how much longer I’ll keep this game on my Vita since it takes up more than a gig on my 8GB memory card.  If you have the space and find it on sale, it's worth looking into.