Thank you, The Game Atelier, for sending us a review copy of this game!

SunFlowers is a simple but addictive puzzle game that’s available for the Vita and iOS devices.  The meager asking price of $3.99 gets you two worlds to play in and over three hundred flowers to collect, combine, and share with your friends.   If you don't have a green thumb, have no fear as the game is easy to pick up and play!

The premise is simple: you’re the sun and it’s your job to water the seeds and flowers by dropping your sun rays through the clouds.  If a ray touches a flower or seed directly, it will scorch them.  Too many rays will burn the land and take away one of your three lives.  If you pass a ray through a storm cloud, it will send lightning and cause the same negative effects. 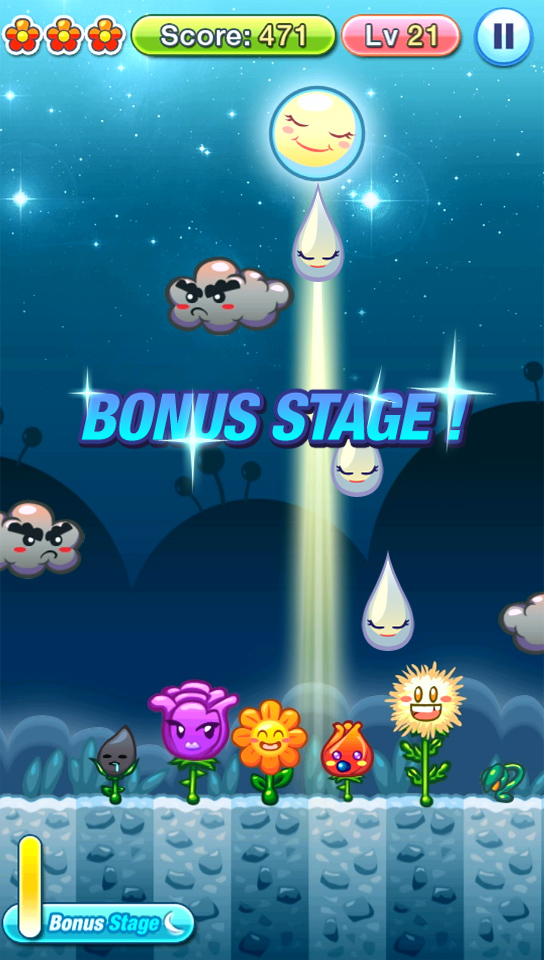 Strong Points: Lots of unlockables; adorable graphics; catchy music; fun gameplay that utilizes many of the Vita’s features.
Weak Points: It’s a great pick up and play game for short periods of time, but long stretches get repetitive.
Moral Warnings: None!

Besides the storm clouds, natural disasters will harm your plants if you don’t act quickly.  Water based occurrences such as freezing or submerging your plants require sending unfiltered sun rays to undo the damage.  Again, too many rays will burn your plant or the land.  The Vita hardware is nicely utilized in some of these events.  For example, in the fall, leaves will land on your flowers and you’ll have to shake your device to get them off.  During the sunset, the sky will get darker, and it becomes harder to differentiate the good from the bad clouds.  The solution is to get your system in a well lit area so the cameras will brighten your screen again.

The controls are versatile, as you can use the touch screen or triggers to send the sun rays down.  SunFlowers is the only game I've played on the system that requires you to play vertically.  The touch screen at that angle seems to make more sense than the trigger buttons.  You can also use the rear touch screen, but I haven’t.  To each their own.

The game gets challenging as the clouds pass by at different directions and speeds.  There are three different difficulty levels, and the harder the difficulty you play, the more unique flowers you’ll come across.  Besides getting a high score, your main goal is to collect all of the flowers in your garden.  Some are pretty common while others are harder to come by.  You can pollinate flowers to try and create a specimen that you don’t have.  The downside to doing that is that you’ll be removing the flowers from your garden, and the end result is unknown. 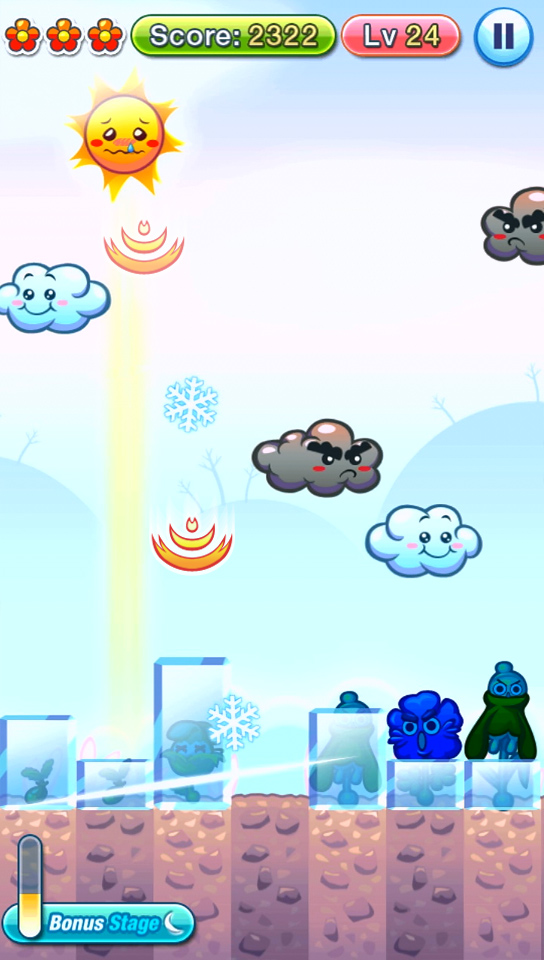 There’s a decent amount of flower types, and each type has multiple and colorful variants.  You'll encounter sunflowers (duh!), roses, tulips, carnations, daisies and even dandelions which look cute in the game.  The artwork is very colorful and anime in style.  Every flower has its own expression and personality.  Some of the flowers will be happy, sad, wearing sun glasses, or shaking maracas.  The flowers from the Tropical world tend to look like pirates.

The colorful graphics and catchy music got the attention of my kids while I played the game.  The music is a peppier version of Vivaldi’s Four Seasons, Spring to be specific.  SunFlowers is a game for all to enjoy; I don’t have anything bad to say about it from a moral standpoint.  It even encourages you to share!  If you use the Vita’s Near program you can create a bouquet to send to gamers in your area.  I’m not sure if they work with the demo version of the game though.  Like many puzzle games, this one is single player only.

SunFlowers is cute, addictive, and fun to play for short periods of time.  I found that I started to get bored after a twenty level winning streak.  I'm guessing that's why you can start the game at level 1, 21, or 41.  You have to make it to 21 or 41 to select them as an option.  There's a demo available if you want to try the game before buying it.  For $3.99 I'd say its well worth it.