Lumines was a launch title for Sony’s PSP back in 2004/2005 and the trend continues with the fourth installment available on launch day for the Play Station Vita.  Being a sucker for buy one get one half-off deals, I picked up this title to expand my Vita game library.  Before this game, I hadn't played the previous versions but we do own Lumines 2 from a similar sale (I told you I was a sucker for them right?).  The instructions scroll across in the intro; that was all I had to go by since no manual was included in the packaging.

The premise is pretty simple: you have to line up and rotate 2x2 blocks to match 4 squares of a similar color to erase them.  Sometimes you'll get special blocks that will clear out all of the connecting blocks of a particular color.  Another unique block will shuffle the blocks which may or may not help your situation. Even if blocks of the same color are matched up, they don’t get erased right away; there’s a timeline that scrolls across the screen in time with the music playing in the background.  It’s easy for these blocks to pile up on a slower song.  If they pile up all the way to the top, your game is over.

If you lose, I like how you have the option to erase your score but continue from the level you were on.  In Lumines II, you have to start over from the beginning.   For every level/skin you complete it will be unlocked to share with others or create your own playlists.  If you complete all thirty-four levels, you will beat the game and earn a couple of achievements for doing so.  The last two levels are doozies, but the difficulty curve was pretty balanced in my opinion. 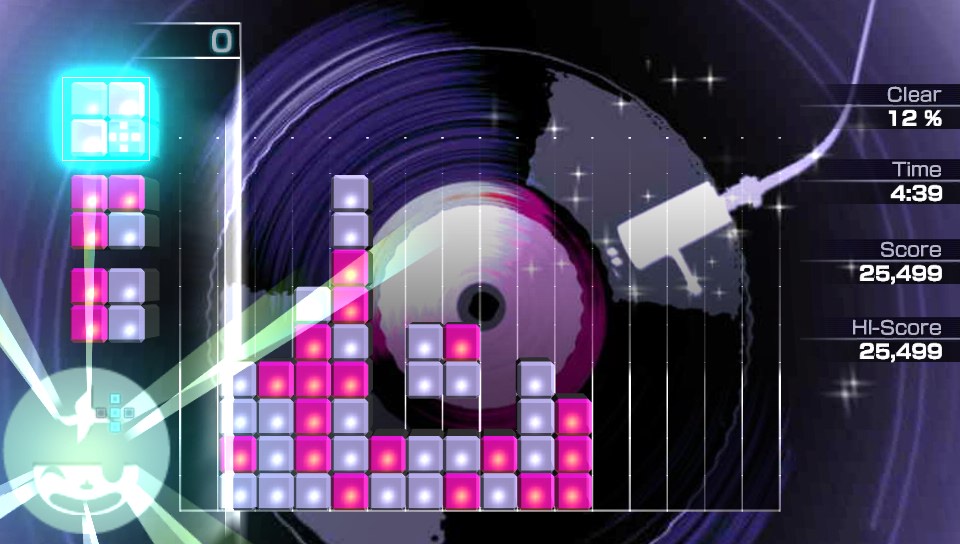 Strong Points: Solid soundtrack; improved retry; working with gamers around the world to deplete the world block.
Weak Points: Not as many game modes as Lumines II.
Moral Warnings: None!

Avatars are another item that you can unlock and share with others.  Every avatar has both single player and multiplayer abilities.  For example, they can give you blocks that are solid colors while you’re playing solo or rotate your opponent’s blocks in multiplayer mode.

Since we only have one Vita in our household, and I couldn't find anyone to play against online, I can't comment on the multiplayer aspects of the game. I wasn’t completely disconnected though. Since my Vita is online, I contributed and gained experience for depleting the World block that’s generated daily. Since I often put my Vita to sleep mid-game, many of my contributions were invalid.

After I completed the single player campaign I checked out the other game modes available.  There is a stop watch mode where you have to see how many blocks you can clear in 30, 60, 180, and 300 seconds.  The goal here is to keep beating your previous scores.  The other mode is the master mode where you have to clear five challenges.  They are pretty tough as I was only able to make it to the second challenge.  Having played Lumines II after beating Electronic Symphony I must say that Lumines II offers a much better variety in game play modes.  I still like how Electronic Symphony lets you retry and progress if you fail a level. 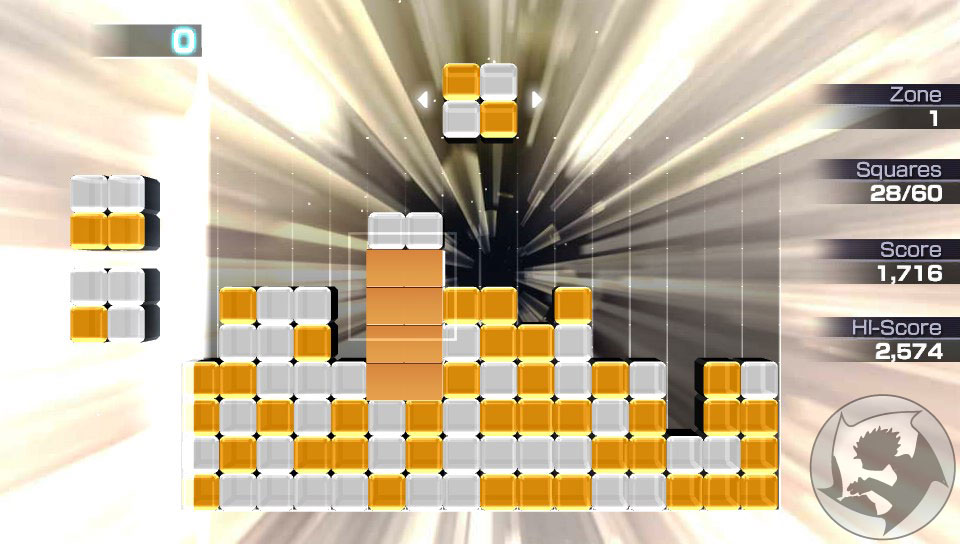 Given that this is a music driven game, the soundtrack was solid and enjoyable to listen to for the most part.  A few of the artists include Benny Benassi, The Chemical Brothers,  Pet Shop Boys, Orbital and Underworld.  The songs are dance and trance which should come as no surprise given this game’s title.  While some of the tracks have swearing in their original form, they have been edited out to earn its ESRB E Rating.  Learn from my fail and do not watch the music videos for these songs on youtube!

Graphically this franchise got an overhaul and uses animated 3D blocks now.  The colors and shapes vary with each level.  There’s even an unlockable Halloween themed one that has black and orange castle windows to line up.

This game looks great, sounds great and is a blast to play once you get the hang of it.  I look forward to playing against someone soon.  Even if I don’t, this is a great casual game to pick up and play anytime, anywhere.  It’s definitely one of my favorite games for the system.