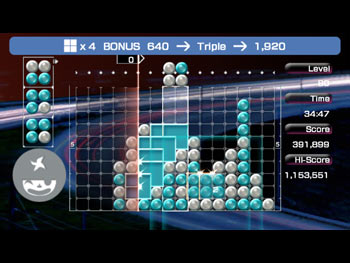 Lumines is one of the best puzzle games to have been made in my opinion. It follows a somewhat Tetris like gameplay pattern of falling bricks being stacked together. Falling down from the top of the screen are 4X4 size squares, made up of smaller squares. Each square is one of two colors, and the object is to make 4X4 size squares of the same color. Once the square has been made, it remains on screen till the pulse line runs over it and causes it to disappear. There is also a multiplayer mode, which can be played human vs. human or human vs. CPU. In this mode the one player size screen is split in half and each player plays on half of it. As the pulse line passes over the screen, whoever creates more blocks each round pushes the playing area over onto his opponent, giving them less space to work with (leading to eventual defeat, if they don\'t push the mid line back) It\'s a better done multiplayer then most puzzle games. Overall, it\'s one of the most fun and addictive puzzle games I\'ve ever played.

For this puzzle game, graphics aren\'t the most important part, but they add quite a bit to the feel of the game. Simple yet vibrant and dynamic, the backgrounds make the game feel fast and exciting. As the single player progresses, the background, music and tiles all change every so often. The backgrounds and the music all come together to form a very visceral experience. The simple graphics also save the PSP\'s battery, which is a big plus for this game.

If you play the game with the sound off, you are missing most all of the game. The sound draws you into the game in an amazing way. It makes dropping blocks of squares on a grid fun, and enjoyable, rather then methodical, and boring. As you move the blocks around the sound effects sound with each movement. It sounds so similar to the music however, that it can feel like the music is dynamically changing with your movements. Each time the background theme changes the sound does as well, and sets a mood for that section. The music selection is great, and adds a whole lot to the gameplay experience.

Lumines is a perfectly stable game. No crashing or freezing. Loading times are next to nothing

The controls in Lumines are simple and easy. It uses the D-pad, X and triangle buttons. You hit and button to rotate your square of blocks, and the use the D-pad to move it around. It\'s simple, and yet perfect.

- Characters clothing is sexy or accentuates their sexuality In a few of the sections of the singe player, there are some silhouettes in the background with rather exaggerated body parts, one or two could have been in suggestive positions, but I couldn\'t really tell with all the other action on screen.

- There is no occult or supernatural in the game.