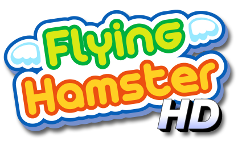 Thank you The Game Atelier for sending us this game to review!

Flying Hamster, A colorful 2D horizontal shooter style game originally debuted on the PSP and Apple devices.  Now it’s been revamped featuring high definition graphics for the Vita and utilizing its new touch screen controls.    An online leader board and trophies have been added as well.  Every trophy you unlock gives you another credit (life) in the game.

The story and gameplay remain the same as the original.  Newton the hamster loves his girlfriend, but she keeps getting snatched away from him. He must battle hordes of enemies and some fierce bosses to get her back.  Just when he thinks he can take a breather, she gets kidnapped again by the next boss.

Strong Points: Fun and challenging game play.
Weak Points: Once you get the hang of it, it’s short.
Moral Warnings: Cartoon violence, crude humor and beer is available as a weapon.

The game has five story mode levels and one bonus level.  Each level is packed with swarms of unique enemies and a tough boss at the end. There are thirty-five enemies in total and they range from seagulls that poop on you to bats, fish, mermaids, toaster robots and flying onions.   The enemies come at you and you have to shoot them down and avoid their various projectiles coming your way.  Each time Newton is hit he’ll lose a heart. After his three hearts are depleted, your current score is reset and a credit is subtracted from your balance.  When you’re out of credits the game is over.

At least Newton isn’t defenseless; he has an unlimited supply of spit.  Any other weapon is limited though.  Besides spit, he can hurl bananas, eggs, berries, bees and beer at any creature that gets in his way.  Each weapon has a more powerful mode if you can find time to charge it up.

The controls are pretty straightforward and I did not use the touch screen capabilities.  I used my analog nub to move Newton around and pressed the X button to fire or charge my weapon or the O button to auto fire.  That’s it. 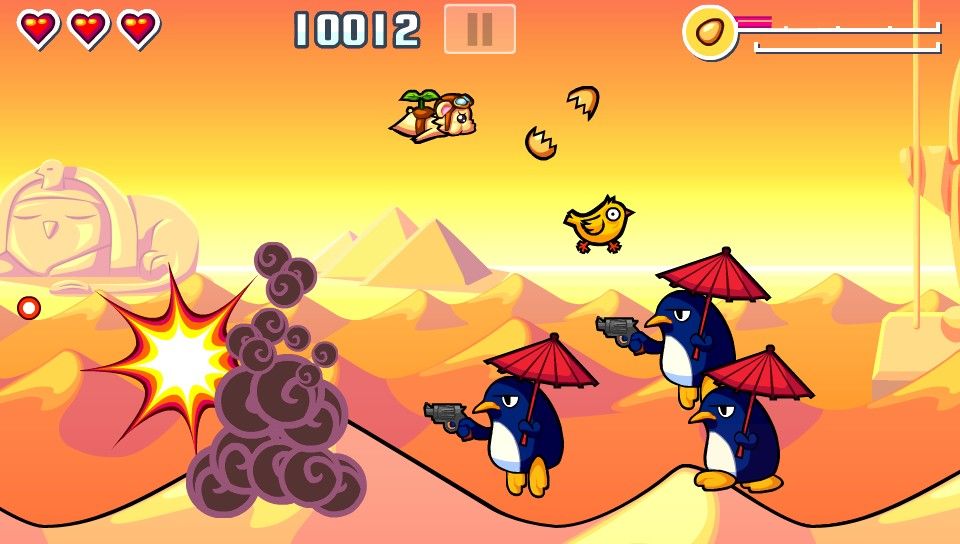 Other than Internet connectivity errors I had no problems running this game on my Vita.  I did discover a favorable glitch though.  If I took too much damage for my liking, I would close the game, reopen it and resume my save.  By doing so I would respawn at the nearest checkpoint at the health level I started there at.

While this game is colorful and has an anime feel to it, it’s not exactly kid friendly.  For the most part the graphics are adorable but there are some details that could have been left out and made this game family friendly.  For example, the underwater mermaid statues really didn’t need nipples.  Other unnecessary details were drunken cats vomiting or playing with their poop.  Other than those issues, the graphics are simply charming.  The sound effects and background music are equally so.  The soundtrack is available in FLAC and mp3 formats for free at bandcamp.com.

Flying Hamster HD has a lot to offer with a meager asking price of $3.99.  Hard Mode is unlocked after you beat the game on Normal difficulty. Like the title implies, it’s HARD!  Every enemy shoots projectiles and the bosses have new moves and more hit points. If you need practice you can also play previously visited levels and sub chapters individually.  No matter how many credits you unlock/earn, there never seems to be enough.   Despite how much of a beating I took, I kept coming back for more!