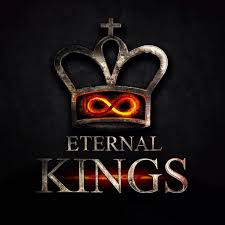 A special thanks to the creators of Eternal Kings for sending us a reviewable version of the game!

Chess is a well-balanced game that requires great skill to master fully. Even if you’re not good at it, you can still have fun playing it. Eternal Kings is based on many of the rules and concepts of chess but incorporates card game mechanics making it a fun and new experience. Not only do you get to fully kill the king to win, but you get to lay down traps, structures, and harness many cool abilities while playing.

All of the same chess pieces and movement patterns remain, including the pawn moving one or two spaces on the first turn and then once per turn and being able to attack diagonally. In the deck I played with, I had one pawn that was able to attack in any direction. That sure caught my opponent off guard! Besides moving diagonally, my bishops had a shadow ability that allowed them to move through two of my pieces if needed.

There are four decks or realms in this game and they each cater to different playing styles. The realms are Agility, Wisdom, Strength, and Intelligence. Agility focuses on speed and nimbleness and the deck contains four traps that can be placed on the board. Since the traps are facing down, the opposing player won’t know if it’s one of the bluffs unless they trigger it and see for themselves. The wisdom cards focus on protection, healing, and coordination. The wisdom deck is a good counter to agility as the intelligence realm offsets the strength deck. Instead of traps, the strength deck allows for some deadly structures to be placed on the board. Aptly named, the creatures in the strength realm pack quite a punch. If you like magic and versatility, the intelligence deck may be the one for you. 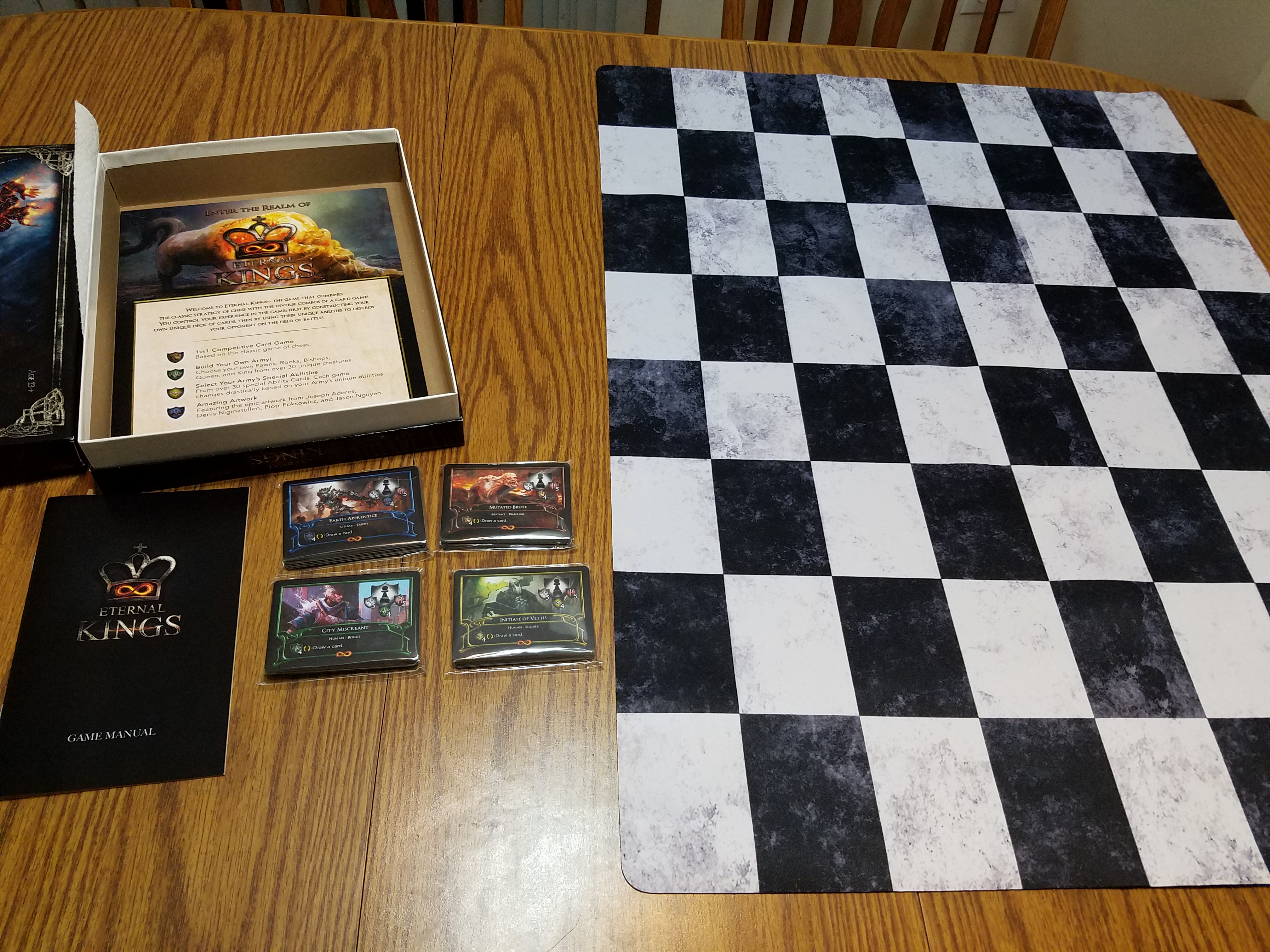 Playing with pure decks is an option, but you can combine realms and construct your own powerful deck. There are rules that have to be followed to keep the balance. Each deck must have eight pawns, two rooks, two knights, and two bishops, as well as a king and a queen. The powerful pawn I mentioned earlier is a restricted card that only allows one copy to be included per deck. Along with the playable cards, you’ll need sixteen ability cards and you can have duplicates of them as long as they are not restricted cards.

Chess players will feel right at home in Eternal Kings. There is a learning curve, as you get familiar with each of the pieces and their abilities. Drawing an action card is not a given and must be earned by playing a card that lets you do so. Once a card’s ability has been used, it must be flipped over to prevent double dipping. At the end of each turn, any health points are replenished for cards that were attacked. If an attacker is unsuccessful (and still alive), they must return to their starting position.

Each turn has three phases. The beginning phase is where triggered events happen and the discipline required to use abilities is replenished. In the movement phase at least one creature must move. A creature can only move once per turn. Some cards allow for nearby allies to move as well but they must take turns. Abilities are set and pre-existing abilities are also activated in the movement phase. The final end phase is where end turn abilities are triggered. Any ability cards exceeding the allowed limit of five are discarded in this phase. 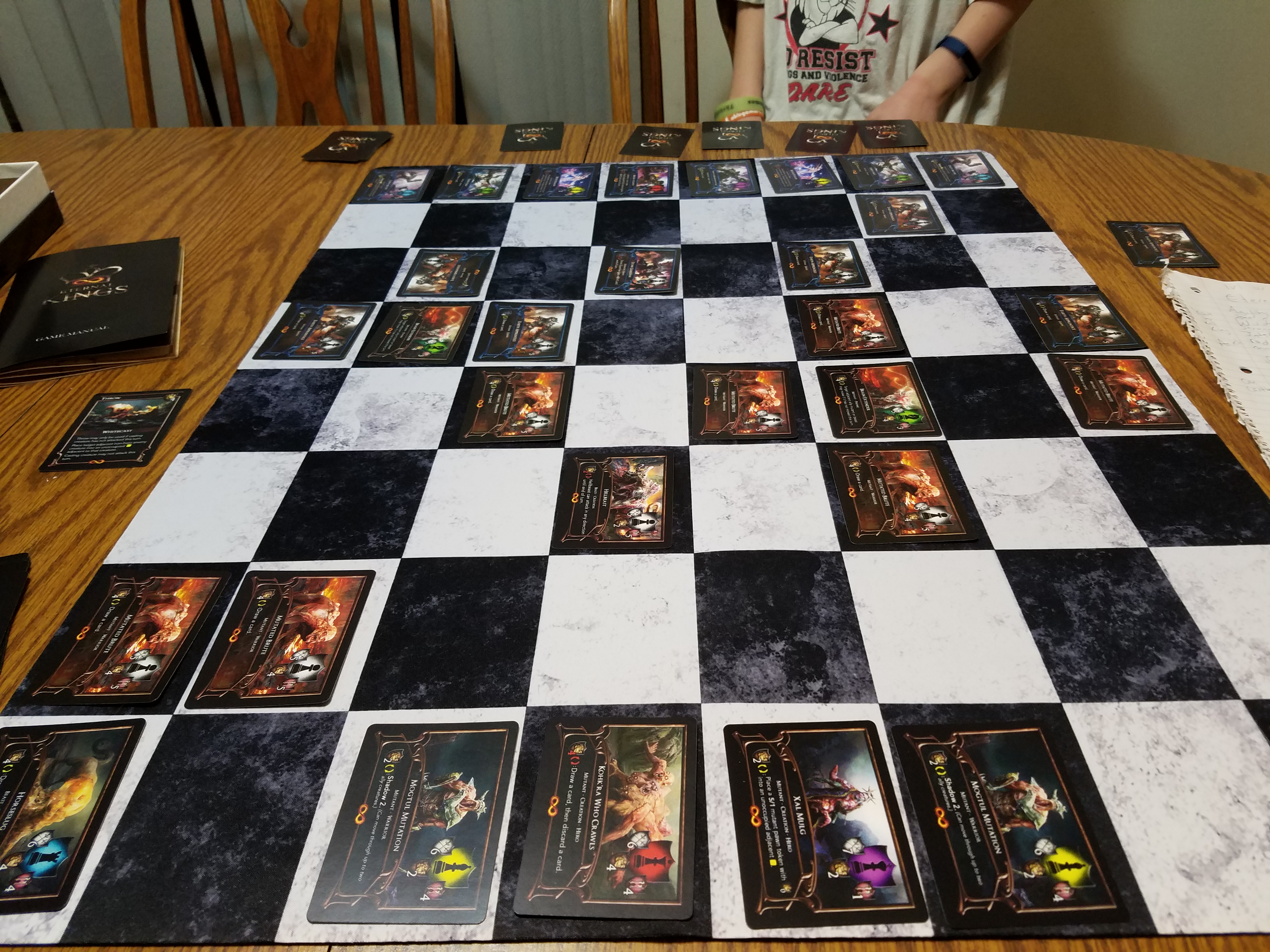 The length of the game depends on the skillset of the players involved. My son and I enjoyed an hour-long skirmish and he’s hoping for a rematch (I won). He is especially looking forward to customizing his own deck instead of sticking with a prebuilt realm. Eternal Kings is ideal for tournaments and can be played with two or four players.

The game mat reminds me of a thin mouse pad. The rubberized bottom makes it stick to the surface without wrinkling or shifting. The checkered rectangle spaces are the perfect size for the card pieces. Not surprisingly, it looks just like a chessboard. Why re-invent the wheel, right?

Visually, Eternal Kings is very impressive. The art style is rather dark and each of the creatures are well designed and have a lot of detail. You won't find cheerful and bright colors, but the artwork is fantastic nonetheless. The card stock is smooth and feels durable. I look forward to this game lasting and providing us many years of enjoyment.

If you enjoy chess and card games, you’ll want to check out Eternal Kings which is currently being Kickstarted. The game can be yours for $44 and is a great addition to any board gamer’s library as long as they don’t mind some magic use.