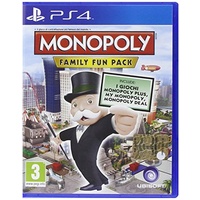 Thank you Ubisoft for sending us a review copy of this game!

In our home we have three different variations of the popular board game, Monopoly.  We have the original, a Nintendo themed one, and the ATM version.   Out of all of them, the classic version gets the most use.  While Monopoly has been digitized many times before, this is our first time playing it in videogame format.  Despite my crappy luck, the whole family enjoyed our time in Monopoly Family Fun Pack.

If you're creative you can design your own Monopoly board in the My Monopoly mode.  You can customize the property names and their appearance.  I can just imagine all of the giggles coming from a solar system themed board with a property named Uranus.

If you're not feeling very creative you can use the standard board or a 3D enhanced living board with people, trains, and cars moving around it.  There is also a Monopoly Rabbids board available as well.  Once you have the board picked out, you must choose by which rules you want to follow.  You can go with the Classic Rules or Speed Die which adds a third dice to be rolled.  If the third custom dice lands on a Mr. Monopoly face,  you get to advance to the next available property after taking your regular turn. 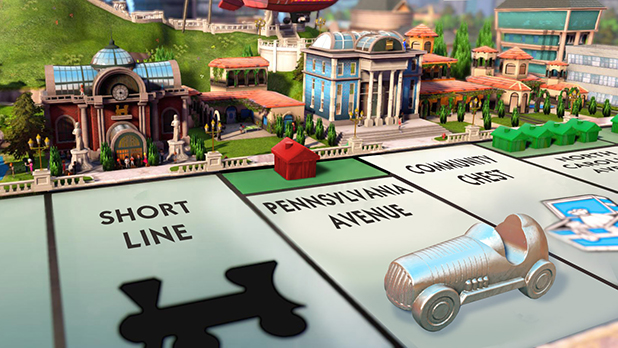 Strong Points: Decent representation of the classic board game with nice visuals
Weak Points: Slow animations; repetitive dialogue; not many people playing it online; no back option to undo rolling dice to get out of jail
Moral Warnings: None unless you play against sore losers

Some popular house rules are readily available to add into the game if you like.  I was raised with the Free Parking Cash rule and that is one of the options.  Other available additions include getting $1000 for rolling two ones, the first player to reach $3000 wins, build houses without owning a monopoly, collect rent in jail, buy available properties through auction,  or collect $400 or moving anywhere on the board if you land on Go.

Once you have the rules and board style picked out, it's time to play!  I like how you can share one controller and pass it around.  At the beginning of the game, each player rolls the die (by pressing  the X button) to determine their movement order.  Up to six people or computer opponents can play.  You can set the AI difficulty to Very easy, Easy, Normal, and Hard.   If you're feeling photogenic you can enable the camera to take pictures of the players throughout the game.

All of the classic Monopoly pieces are in play with the addition of a Raving Rabbid piece.   Each piece has its own animated movement style.  For example, the dog and cat will walk while the thimble will roll to its destination.  The jail animations are amusing the first time they are seen, but not so much when it happens to you often. 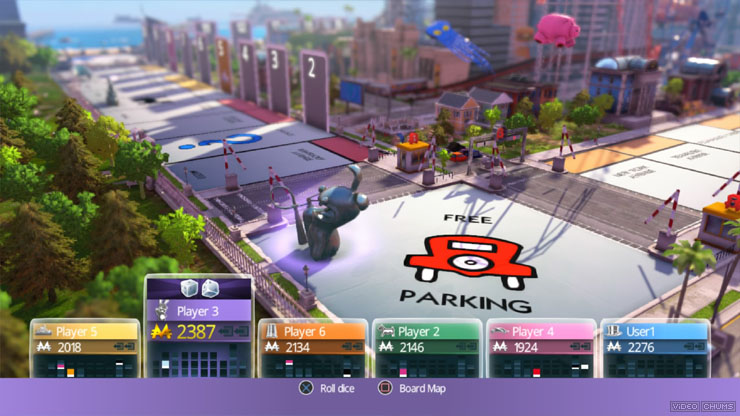 On your turn you can roll the die, look at the board map, make a trade, manage properties, or declare bankruptcy.  The trade menu lets you trade properties for cash and/or real estate.  If you're badly in debt you can declare bankruptcy and the game will give all of your assets to the player you owed money to.     When all of the players but one declares bankruptcy, the game is over.

True to Monopoly fashion, this game takes a while to play through.  While the player movement animations can be skipped,  their other actions (or lack thereof) cannot be.  Unlike the board game, this digital version is easy to stop and resume if needed.

If you're looking for a faster game, Monopoly Family Fun Pack also includes a digital rendition of the card game, Monopoly Deal.  The goal of Monopoly Deal is acquire three complete monopoly sets of different colors.  You're luck can change at any moment so you must avoid Debt Collector, Forced Deal, and Deal Breaker cards.  While this game can typically take a half an hour to beat in the card version, the digital version may take longer.  The first obstacle is finding someone online or in your friends list to play against.  Once you have a game going, the pace may vary depending on how  long it takes your opponent to make a move.

While not perfect, there is a lot to like in the Monopoly Family Fun Pack.  The retail price is $30, but I have seen it as low as $20 online.  For $20 it's definitely worth considering.   Our family has enjoyed it and I am curious if that will become our new preferred method of playing Monopoly.