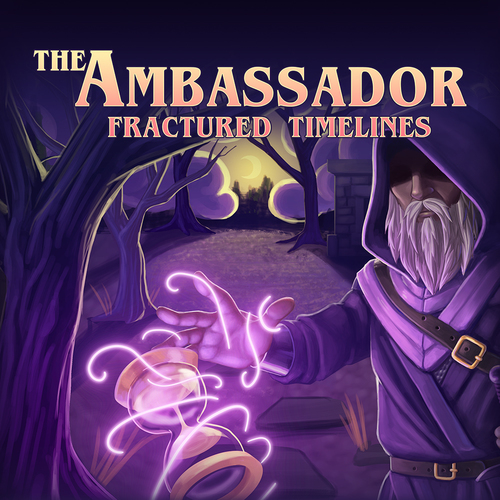 Thanks to Quantum Astrophysicists Guild for sending us a review copy!

Gregor’s training to serve the Eternal Fellowship is complete, and he’s now ready to help keep the peace. It’s a shame that the capital of Tamaris has just blown up. The Ambassador: Fractured Timelines follows Gregor’s twin-stick shooting journey to discover who is responsible for destroying the city and stop them with the power of time.

Gregor is equipped with a spear as his primary weapon, and once thrown he must wait for it to boomerang back to him. Miss a shot, and it’s a long wait until the weapon returns. He’s also given a magic wand which can fire more rapidly, but expends mana to do so. The main strength of magic weapons is firing off rapid salvos of shots if mana is allowed to regenerate. As Gregor completes the 50 levels of the game, he’ll gain access to more weapons both mundane and magic. They each bring a minor quirk in their operation, and I found myself sticking to the crossbow and dagger since they could hold several shots at once. Additional armour and clothing options also become available, and these impart a variety of bonuses such as faster mana recovery, faster movement, or more health. Swapping out weapons and armour can be done at any time at the press of a button. 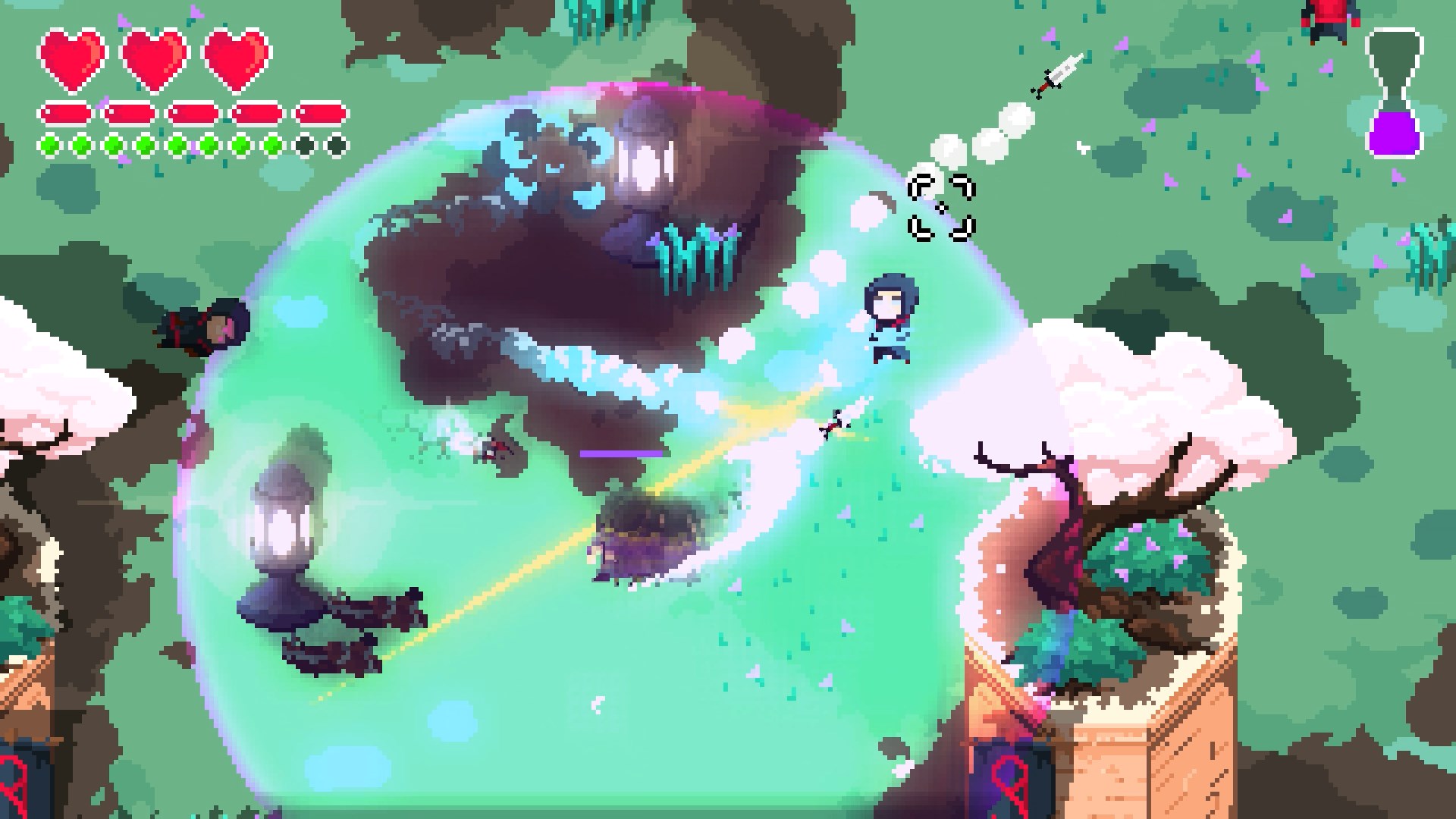 As an Ambassador of Time, Gregor is also able to stop the time of enemies around him. Enemies will pause, and their projectiles are halted as long as you have still have enough magical power. At first this just seemed like a thematic riff on a dodge-roll mechanic, but it turns out to have some extra uses. As I played through the game, I discovered that extending the time on enemy vulnerability windows was much more powerful than I initially gave it credit for. As a bonus, the large radius of the time stop also affords a lot of safety in approaching and retreating from tougher enemies. This turns out to be a much needed quality over a standard dodge-roll, since the level design constantly pushes you towards chaotic combat with enemies in all directions. Environmental objects also get in on the time stop action; shining objects caught in your bubble can be fired at to trigger explosions or send them barrelling into enemies.

The enemies are quite the varied lot. Besides the barrage of melee enemies, Gregor will face off against enemy wizards, crossbow snipers, treants, and floating monstrosities. They’re all individually quite simple, but the emergent qualities of combat start to show as the game picks up its pace. The differences between stopping time and a much simpler dodge-roll start to become much more apparent as the level designs begin mixing things up. The tougher enemies add a bit of spice to the twin-stick action, forcing you to endure their attack pattern until they expose themselves, and again the level designs play off of their dynamics. Their numbers aren’t overwhelming as an arcade-style title would have it, but the much lower rate of fire and having to wait for weapons to return offsets this, meaning the game ends up being just as intense.

The Ambassador is not an easy game, but it’s not exactly hard either. Individual encounters are fair, but some levels do feel excessively long. It’s balanced quite reasonably for a four-hour experience, with the possible exception of the final boss presenting a difficulty spike just because of how long it takes. After you’re done with the game, you can always try your hand at the zero damage and timer challenges inherent to every level. There’s also a Bloodhenge mode, which is simply an arena mode where Gregor will have to fight off waves of enemies. 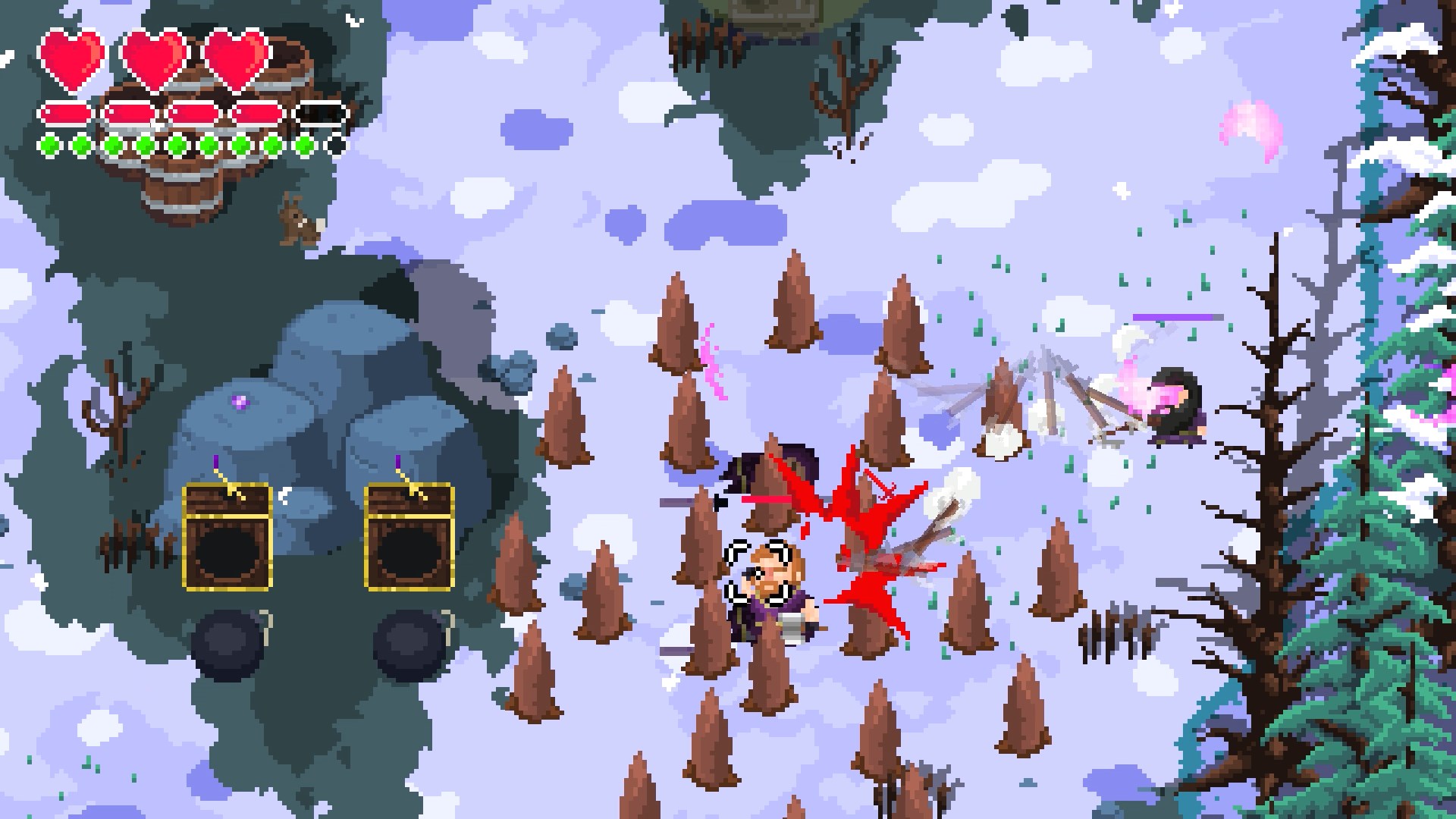 The pixel art is quite detailed, and works with the soundtrack to convey the Celtic influence. The Red Army in the Everwood feels like Cat Coit Celidon brought to life. Mount Arawn looks to be a take on Slievenamon. The ruins of Tamaris are oppressively dull with their bland colors, doubling down on the sense of desolation. Avalon is idealistically beautiful with its gentle snowfall of cherry blossom petals punctuating the struggle beneath. The Arthurian legend runs deep through Fractured Timelines, and nerds of Camelot will surely find a lot of interesting takes on the source material.

Most of the moral concerns of this game are of the violent kind. Gregor slays enemy men and women on his quest. A huge splash of blood is shown when they receive damage, and they leave behind a corpse. Language and sexual content are perfectly clean. Celtic mythology and the Celtic pantheon is referenced here, but the magic used by Gregor and the witches of Mount Arawn feels distinctly fantastical rather than druidic. Finally, the downfall of Tamaris is shown to be a rebellion of sorts against authority, but it’s also revealed to be a hard choice between two possible calamities.

The Abassador: Fractured Timelines drips with one of the most enduring legends of the Western world, right down to its almost-tragic portrayal of violence. This romp through Arthurian-inspired fantasy is sure to keep you engaged until the Once and Future King returns.