Thank You Ferulox Studios for submitting this through our Steam Curator!

Taking inspiration from classics such as Space Invaders, Galaxian, Galaga, Operation Wolf, and Cabal, Ferluox Studios’ Star Tank brings the arcade setting to a computer near you! This little entry in the shoot ‘em up genre manages to stand out from many others due to its unique control scheme.

The main goal of Star Tank is taking your little tank on a 2D plane across 20 levels. You start with 11 hit points and losing all of your health is a game over. There are no checkpoints of any sort so you start from the beginning every time. In most levels, you're tasked with collecting 15 gems that drop from enemies. Boss levels have you defeat the boss instead.

How Star Tank controls are that you’ll either use the control stick or arrow keys to move left and right or to aim your reticle up and down. Holding down the brake button (either B or Q on a controller/keyboard) will plant the tank in place giving you more control over your aim. There are also buttons used to jump and to fire a missile which is an instant explosion in a wide area. Shooting with the reticle is instant and hits the target immediately. Enemies take a half-dozen or more shots to destroy. The controls do take some time to get used to and are part of the challenge. However, I do wish that there were control remapping settings available. 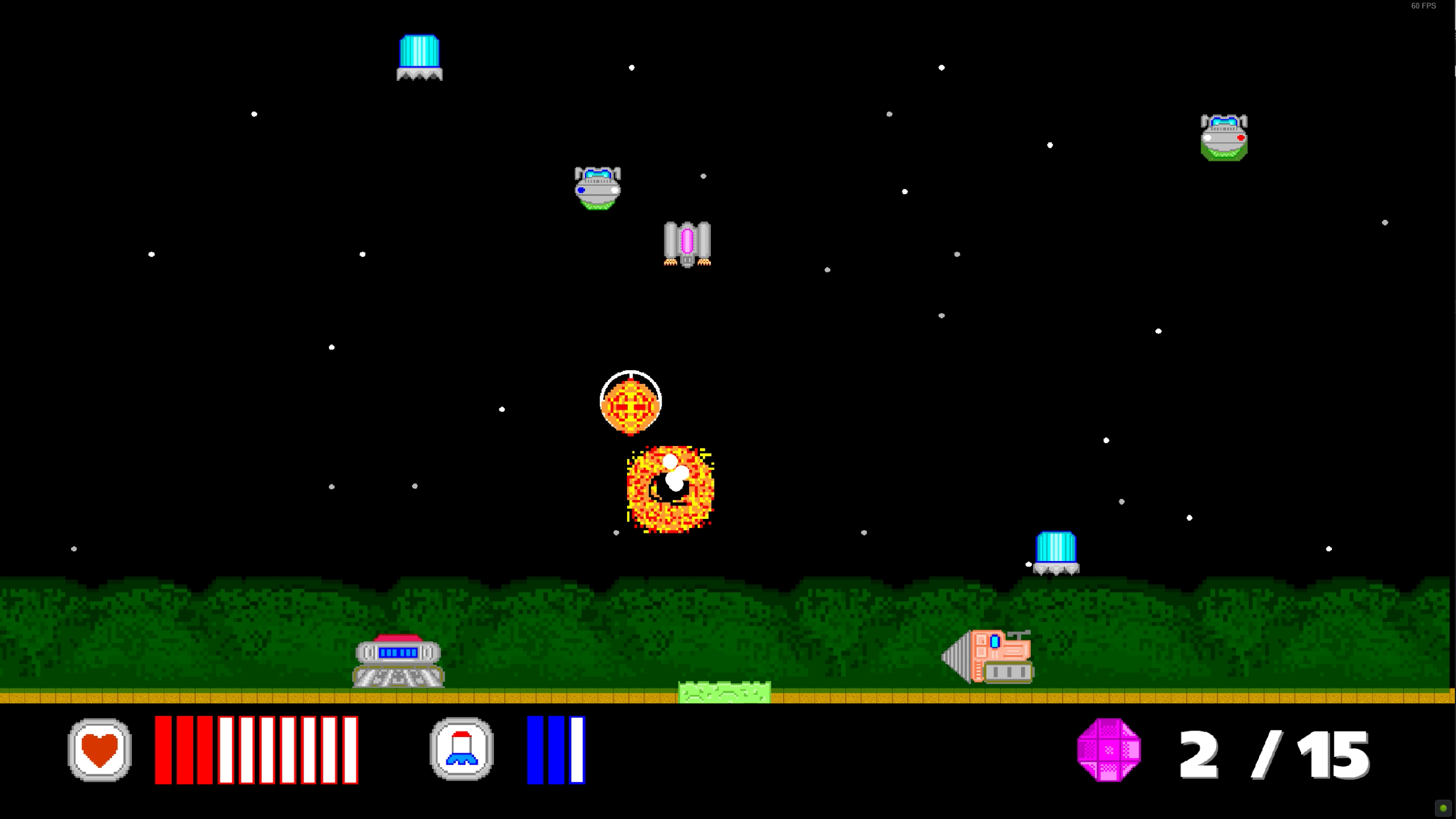 Strong Points: Unique gameplay lets it stand out from others
Weak Points: Missing basic features such as settings and a pause function
Moral Warnings: Spaceship violence and explosions

Speaking of settings, Star Tank has a disturbing lack of them to the point that there isn’t even an option to pause. The only times where a “pause” happens is between levels. Star Tank doesn’t even have options for changing the size of the display. It will always display on your main monitor (if you use two or more) on full screen. I know it takes inspiration from arcade classics, but if you ask me, that’s too much of an inspiration.

The enemies and progression of levels are done nicely. Each enemy has a distinct design and is introduced at a good enough pace that it never feels overwhelming. There are enemies that move slowly while shooting small projectiles every once in a while, while other drill-like enemies move on the same plane as you, making you either jump over or shoot them. Sometimes, enemies will drop health or missiles to pick up. Keep in mind that all drops (even the gems) disappear after a short time, but it isn’t always the best option to pick them up. This is more of a game of patience and observance than one of speed. 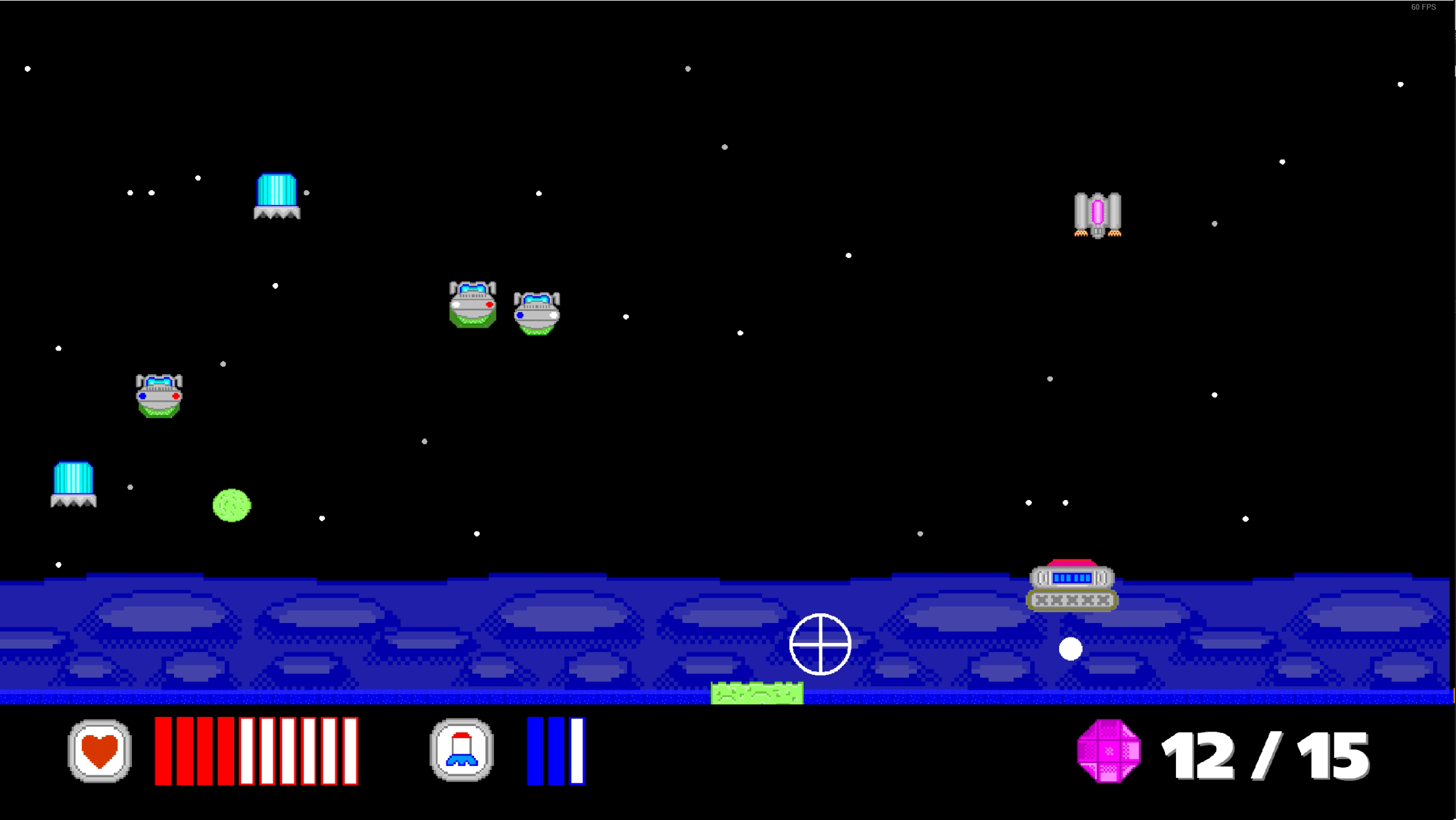 Star Tank takes place at night or in space so the majority of the background is black. As the 20 levels go through four areas, only the lower part of the screen changes, usually keeping a solid primary color. The first area is grassy while the last area is based on a city. The enemies mostly have unique sprites and are easy to tell from a glance. The overall sprite work is fine for what it is going for. There is a bit of fuzziness to the sprites like it was made in a basic art program. Sound design works as every type of enemy projectile has an individual chime. The music takes a more modern approach instead of the 8 or 16-bit soundchip that many retro titles like to use.

Every successful playthrough will take anywhere between 30 and 45 minutes to complete although due to the difficulty, it’ll probably take the average person a few hours before a win. The only moral concern to be aware of is spaceship violence and explosions. I can recommend Star Tank as it is a quick experience and fun to play, but understand that this is a niche title due to the arcade nature and difficulty. If replaying a game to get enjoyment out of it sounds like a bore, then you can pass on this one.