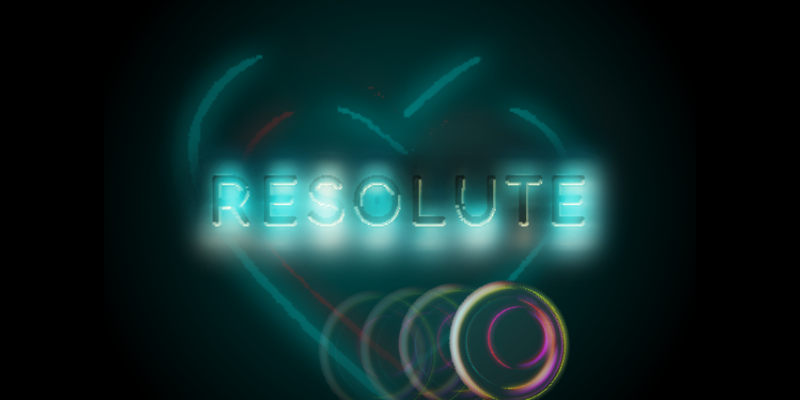 As I played Resolute, I started to like the aesthetics more and more. This video game takes place in an endless voice with strange shapes that can be called “ships” with even stranger bullet patterns and shapes. The black background within the enclosed square almost makes me feel like I’m looking at cells in a microscope. It can feel kind of lonely at times, but I tend to like settings that make you realize that you’re a lot smaller than you assume.

Resolute is a “twin-stick shooter” that is released for free on itch.io. You go through seemingly endless waves as a circle taking out other circles, triangles, and squares. You can only take four hits from any source of damage before it is game over. The controls are very simple to grasp as only keyboard controls are available. It has the traditional WASD movement with the mouse used for aiming and shooting. You can also use the right mouse button to activate a shield to absorb damage for a small window of time. There are also portals that are within the square field that will teleport you to an empty square as long as the yellow bar directly underneath your health is filled. It is refilled by destroying enemies. 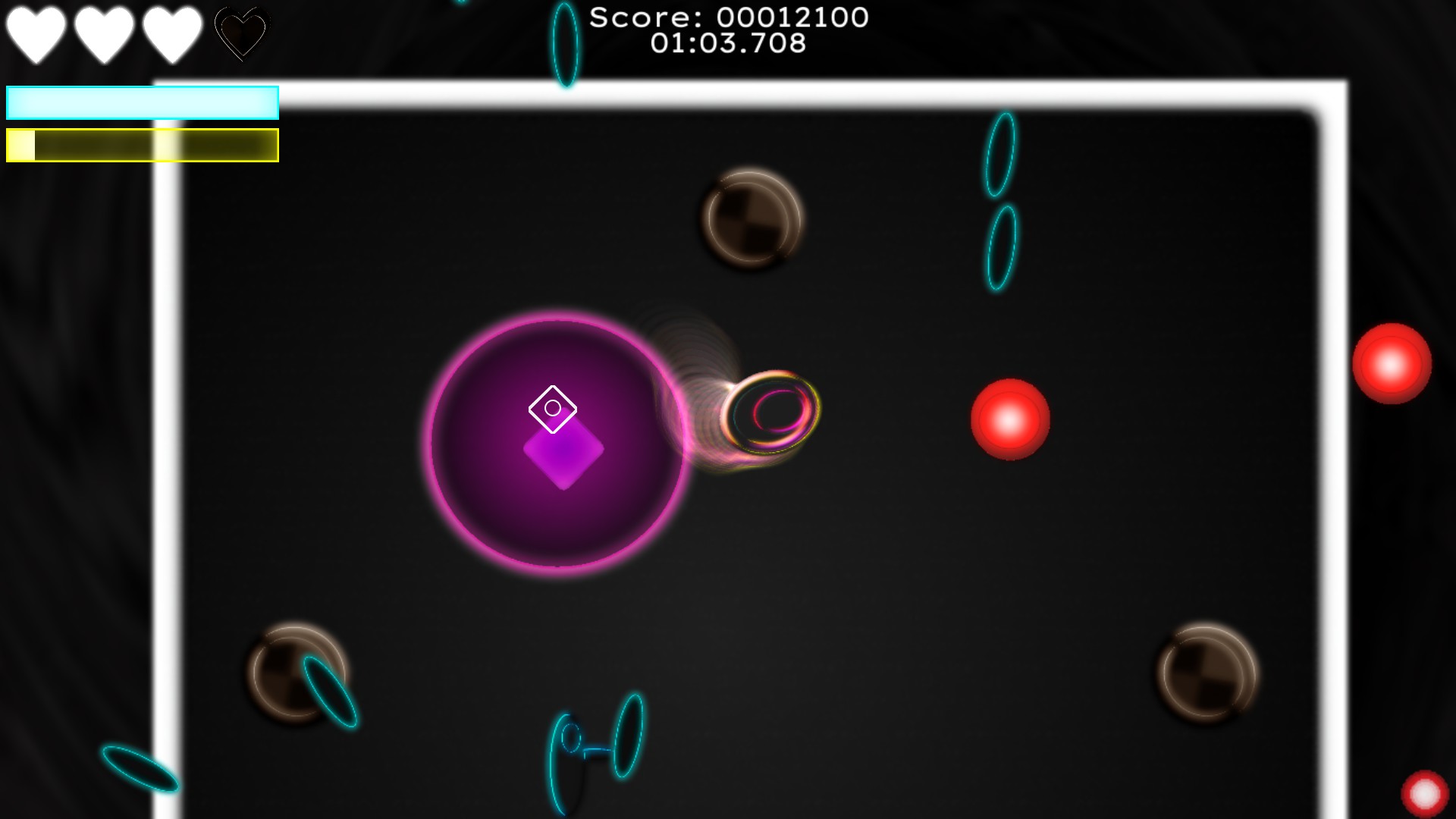 There are enemies that can split into smaller parts when destroyed. There are enemies that have a damaging aura around them. The variety is solid overall, but it can be tricky and punishing learning what each enemy does. Your shield blocks bullets, but not enemies—which I learned the hard way when the enemies that split when destroyed all rushed me and I instantly died. When it comes to damage, there are no invulnerability windows after taking damage, which I assume is because of the shield. But if you’re not paying close attention, a run can end as soon as it starts.

Resolute is inspired by the arcade era of video games, so there is a lot of “trial by fire” and hard difficulty. As the game immediately throws you into the action and there is a lack of options and instruction, you’re going to be learning as you go. Waves start to get intense as you’re doing a lot of management between enemies, spacing and knowing when to teleport to squares. 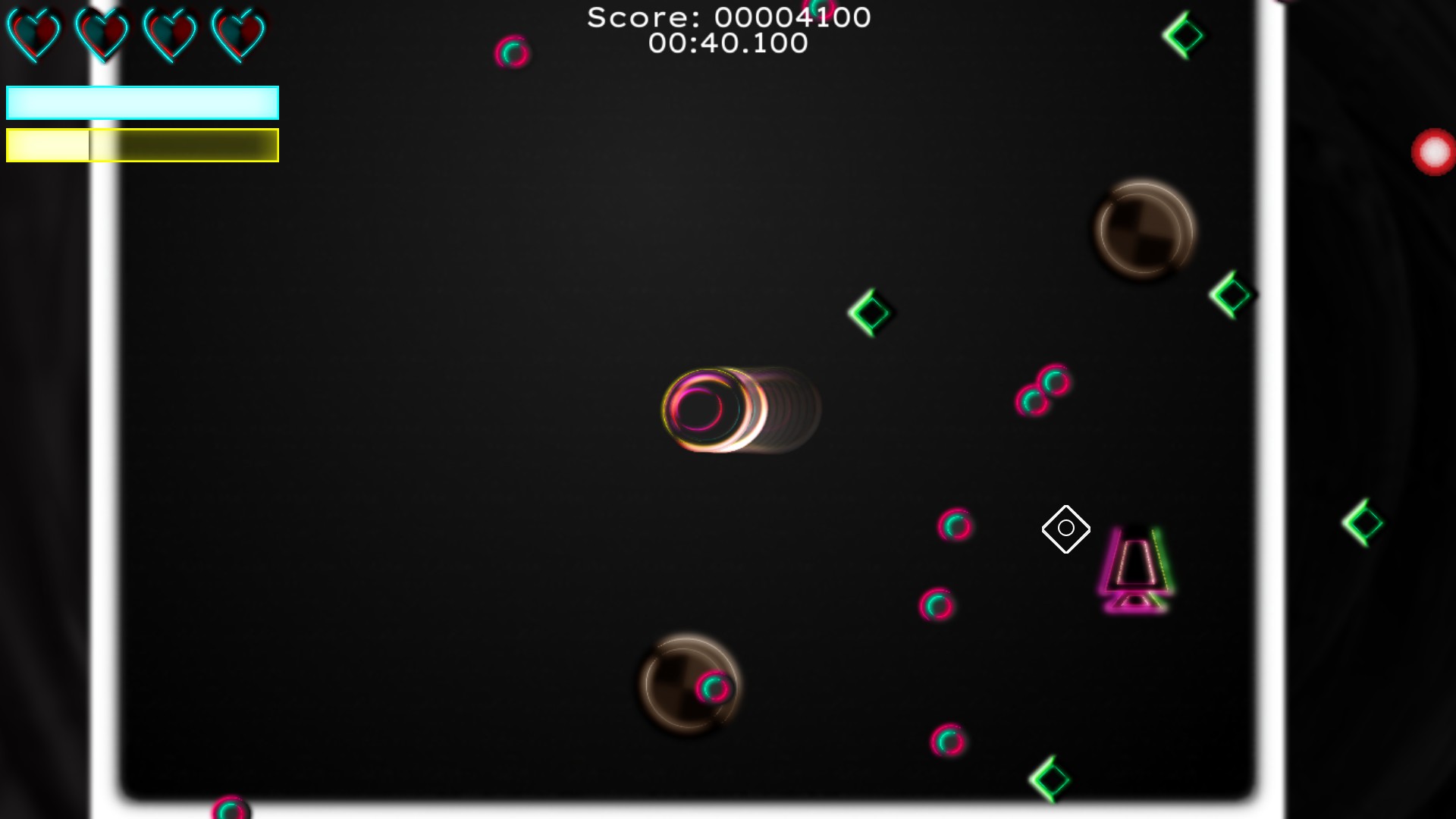 I don’t know what type of “genre” Resolute’s music is part of, but it’s an ambient sort. It has a slow, relaxing pace meant to be purely background noise. The sound effects are distinct, with different sounds for you shooting, and when enemies are destroyed. Even the constant “pew pew” of your shots didn’t manage to get annoying for me, but if it does for you, you can always turn the SFX down in the settings.

I would call Resolute one of those “complementary games.” Those are the types of games that you play when you want your hands to be busy listening to a podcast or music. It’s also nice to play while waiting for matchmaking in a multiplayer game. There isn’t much to the experience so the quick nature of the gameplay and the fact that you don’t have to focus your full attention on it make it perfect for the role it was meant to fill. The only crash I experienced was when I first played and I tried to replicate it the same way I experienced it and I wasn’t able to, so I’d call it a stable product. There are some small things such as no pausing (pressing escape sends you to the menu) and I do wish the controls and more information were within the game itself, but they aren’t deal breakers. The only thing morally concerning about it is shooting other distinct shapes, but since the shapes are so vague, I wouldn’t call it exceptionally violent by any means.