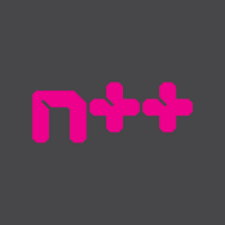 Precision platformers have been a subgenre for over a decade now, and I imagine younger players will be thinking of Super Meat Boy or Celeste when asked for signature titles in this genre. There is a game older than these however, made using the now defunct Adobe Flash Media Player, called “N”. It is, to my knowledge, the first precision platformer to exist, and Metanet’s 2016 release N++ (aka Nplusplus) continues its fine tradition of making you feel like a veritable ninja.

You’re a ninja, you have 90 seconds to live, and you need to complete five levels to finish an episode before you die. Collect gold to extend your life, because you’re a greedy little thing. There’s minimal faffing about with the story. The controls are likewise extremely simple – move left, move right, and jump. There is also a robust level editor for players to create and submit their own levels.

One of the major differences between N++ and other precision platformers is that your movement has inertia. Learning to maintain and redirect your momentum is paramount. Timing your jumps, bunny hopping, wall jumping, triple jumps, and corner bumps are all essential pre-requisites to pull off amazing feats of agility that will have you soaring through the air. Plenty of level layouts encourage this sort of behaviour, providing ramps and walls aplenty on which to build your momentum for a spectacular jump. 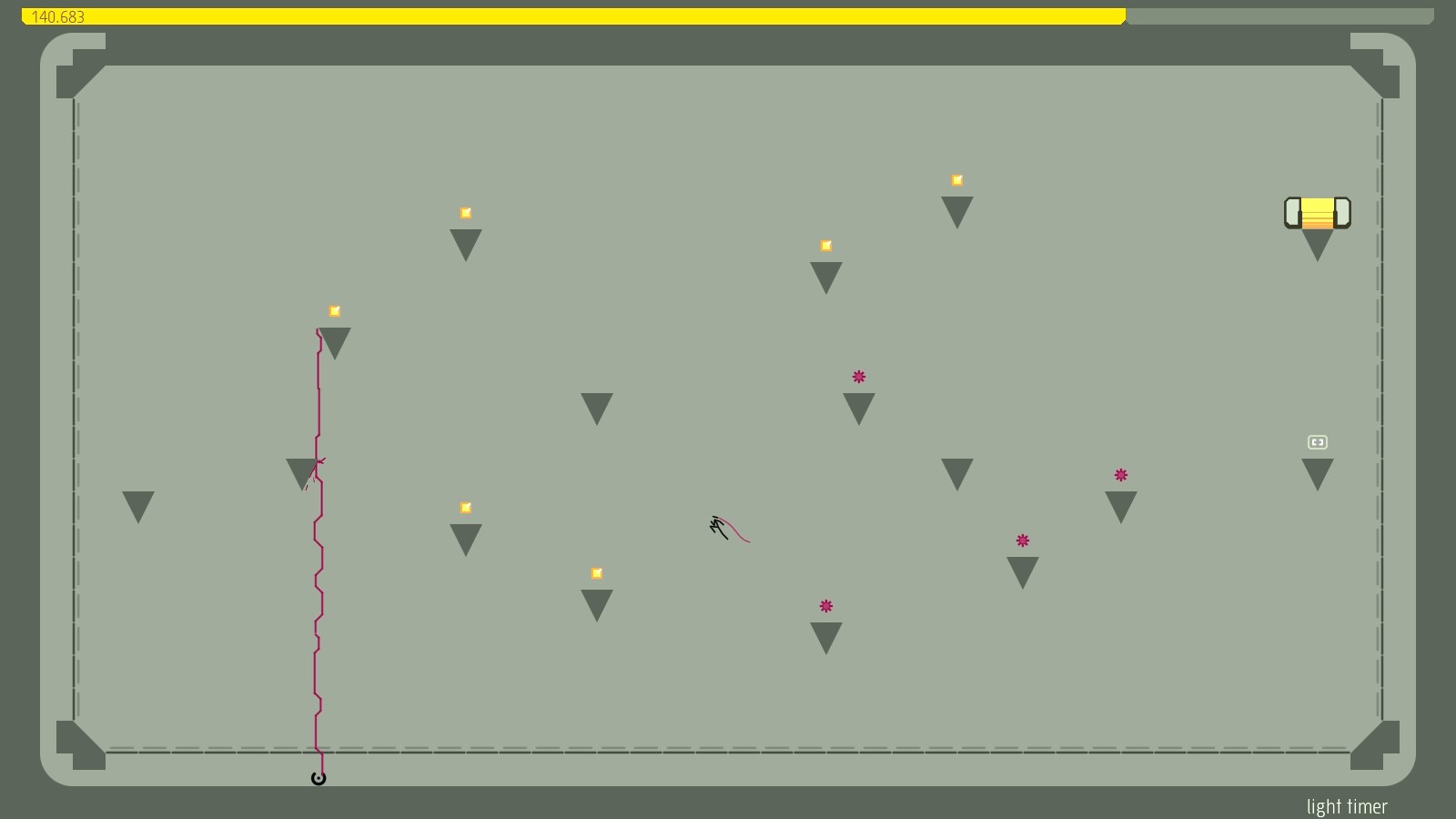 Another major difference between N++ and other precision platformers is that you can die from falling too far. Other platformers are forced to up the ante to keep things interesting, to increase the intensity and pace, or add new mechanics. N++ is able to maintain that tension and engagement simply by placing tricky platforming challenges high up in the air, even without any enemies pursuing you. What’s missing from the tutorials is a lesson that was present in the original Flash game – that death is calculated by your velocity perpendicular to the surface you land on. This means that landing on a slope is fairly safe if you match its angle, but very deadly if you come at it head-on. This has interesting ramifications for a lot of level designs.

Speaking of enemies, there’s also a diverse cast of robotic drones and turrets out for your (ninja) blood. They all have fairly simple mechanics. Mines are fairly straightforward and blow you up when you touch them; they’re the ones you’ll die to the most. Drones for the most part simply require you to slow down a bit and pay attention to their paths. Machine gun turrets force you to keep moving. Gauss turrets can be fooled by changing direction on the fly, or going really fast. Rocket turrets are perhaps the most menacing enemy to a new player, but it’s a glorious feeling when you learn how to out-maneuver them. Shadows are the most exhilarating enemy, and they trace the same path as you once activated. I wish they were in more levels, but given how mentally taxing it is to keep track of them, I can understand why they’re so sparse.

Should you tire of dying on your own, you can also bring along some friend. Up to four players can cooperate to make their way through the regular single player levels, although this does disqualify you from posting to the leaderboards. There is also a set of cooperative maps designed specifically for two players (although again, four can play if you’re fine with not posting to the leaderboard) and a set of Race maps where players compete for the title of Best Ninja. There’s enough levels here to keep most groups entertained for a while. 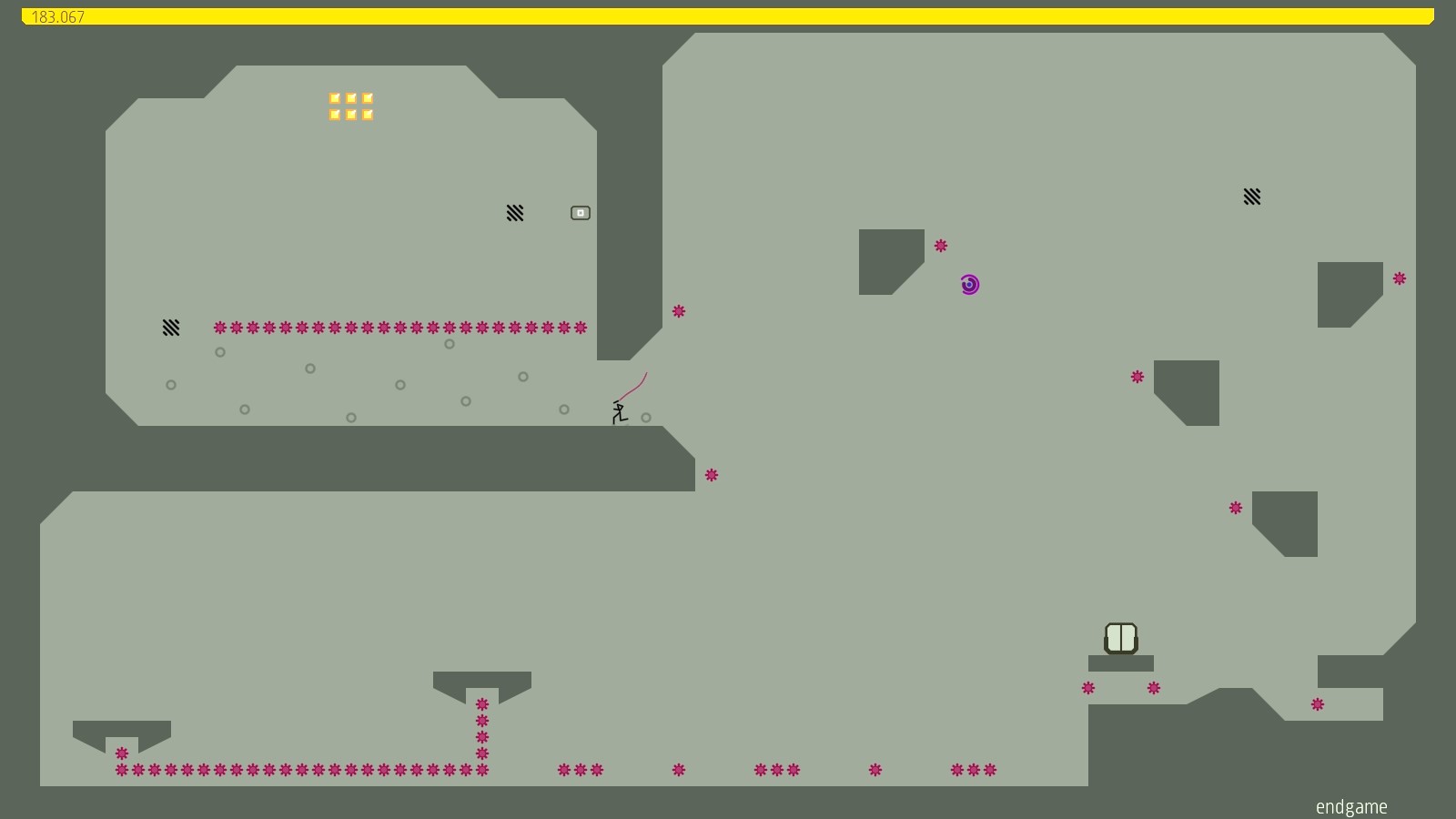 The visuals are simple and straightforward. The level geometry is clear and obvious, and enemies are all simple shapes and colors. There’s never any confusion about what you’re looking at (except for the few levels which hide things intentionally). If you’re not happy with the traditional color scheme (vasquez) then there are several dozen alternatives to choose from. The sound design is on point too; drones chirp vibrantly when they give chase, turrets charge up ominously, and picking up gold comes with an oh-so-satisfying ping. The soundtrack is also something else. Rather than trying to pump some adrenaline into your veins, the calm tones simply augment the latent tension as you immerse yourself in the flow.

If there’s anything wrong with N++, it’s that its online leaderboards are not entirely functional. To be precise, the main leaderboard functions work for the most part – you can still submit and view replays. What doesn’t work is the Friends filter, and the lack of leaderboard scrolling, which restricts the available replays to the top 20 players, plus the 20 players around your own submissions. The other problem is that your save file will eventually be corrupted, a bug that is explained in the forums. This is a pretty big deal. Completing every level, and then redoing every level another four or five (dozen) times for the secret challenges, will easily take up several hundred hours of dedication. If you’ve been hooked, make sure to back up your save file.

To the moral side of things, there is quite a showing of violence. The player ninja will across the thousands of deaths incurred be blown up into bits, electrocuted, dismembered, shot, and squashed. The detail is minimal however, in large part thanks to the game’s incredibly simple graphics. The player emits small and almost-invisible blood trails on death, but these can also be turned off. The only other moral concern here lies in the soundtrack. The song “C Y G N – Orion” has an instance of “d*mn son” which is easily missed. I didn’t unlock all the songs, but I wouldn’t expect anything more questionable than that.

For such a simple game, N++ has a lot of mechanical depth. It is well and truly a masterpiece, and the content in the base game is extensive. There is simply no other option if you are looking for such unadulterated purity in your precision platforming. Feel the rush as you dance delicately around your imminent death. Feel the rush as you soar through the air. Feel the rush as you crumple against the ground. It’s addictive, but you won’t regret it.