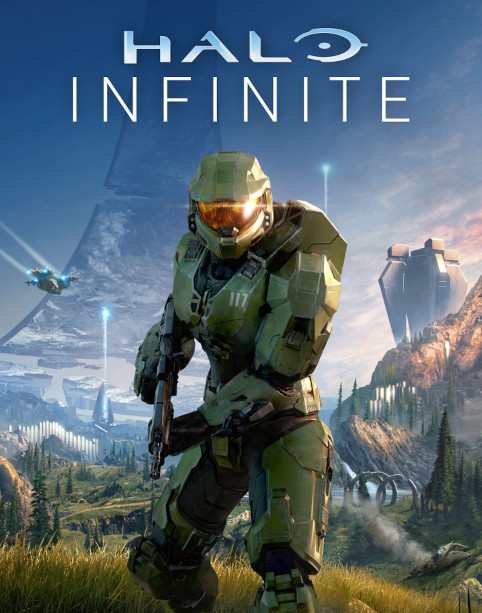 Halo, the most iconic Xbox property, is a series that has been around for twenty years. Many people who are now adults grew up playing these first-person shooters. It wasn’t until I first played Halo Reach at a friend’s house seven years ago that I realized what I was missing out on. When the Master Chief Collection came to PC two years ago, I got into the series for real and had a blast playing the multiplayer modes and playing through most of the campaigns.

While people loved the stories and gameplay of the first three Halo games, the later entries did not live up to the series’ standard, whether that be because of poor mechanics or terrible storytelling. Now, 343 Industries has listened to the fans’ cries for a return to form. Halo Infinite cuts out some hated features of recent games while changing others to make them feel natural.

Halo Infinite is split into two parts, a free-to-play multiplayer and a $60 campaign. In an attempt to return to the formula of older Halo games, Halo Infinite’s multiplayer doesn’t include hated features like loadouts. Sprinting is still present, but it's designed to allow you to retain momentum when moving around the map, rather than making you much faster. This is especially true of the new momentum-based slide that you can perform while sprinting. No longer do you spawn with overpowered equipment that you can simply recharge, but now you have to find equipment in maps, with it having a limited number of uses. While there are several pieces of equipment, the most interesting one is the Grappleshot, which allows you to pull yourself to walls, enemies, and vehicles.

The multiplayer includes a handful of modes that have always been in the series. These include Slayer, which has you competing for the most kills; Oddball, which requires you to hold a skull for the most time; and Capture the Flag, which has you bringing the enemy flag to your base. In private matches, you can customize the rules to change nearly any settings you want, whereas in matchmade games, you are limited to a few variations of these modes, such as versions with more players, versions without teams, and versions with special weapons. Unfortunately, the variety isn’t nearly as great as previous games without modes like Grifball or Infection. There also aren’t any cooperative modes like Firefight, which would have been a nice change of pace. 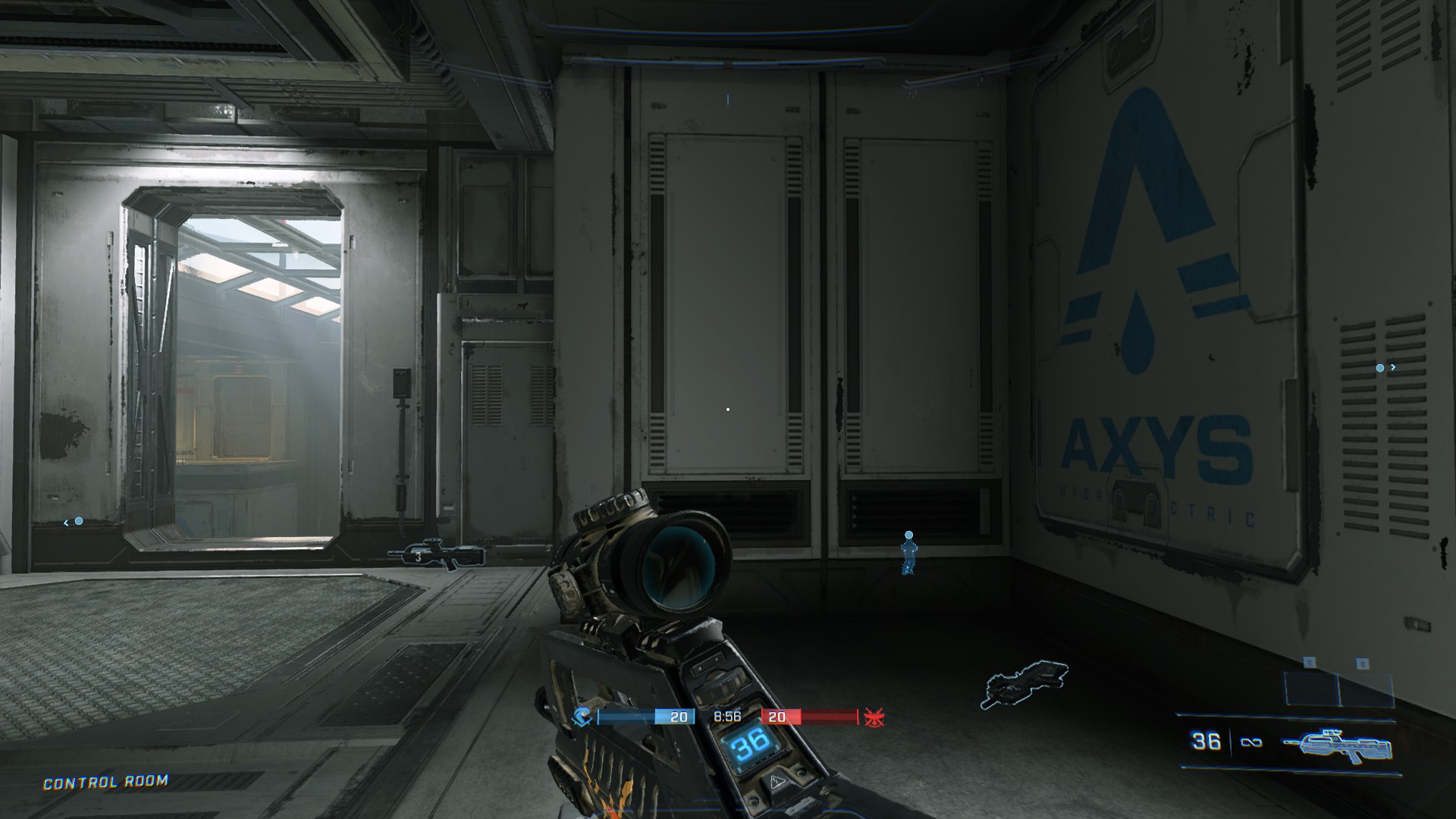 Strong Points: Refined multiplayer that returns to the series' roots; excellent open-world campaign that feels right at home in Halo; jaw-dropping rock soundtrack
Weak Points: Lack of multiplayer gamemodes; overpriced micro-transactions
Moral Warnings: Violence in the form of shooting, stabbing, explosions, and roadkill; some blood; use of words like a**, h*ll, d*mn, and p*ss in campaign; skulls to collect in campaign and mode involving a flaming skull; vehicles and weapons named after supernatural beings; Master Chief is frequently referred to as a demon

Almost all cosmetics are unlocked through micro-transactions. Some items can be bought for $8-20 with in-game currency, while others can be unlocked by progressing in a battle pass. This kind of pay-model is not surprising in a free-to-play game, but it is disappointing nonetheless. I was especially disappointed to see that cosmetics themed around Master Chief were locked behind the battle pass and not the campaign. On the bright side, battle passes don’t have time limits that require you to dedicate all your time to progressing it, and once new passes release, you will still be able to purchase previous passes.

Because the multiplayer is free, the campaign is sold as a $60 DLC pack. I never played much of Halo 4 or any of 5, so I watched a recap video before starting the campaign. (I’m glad I did, as there is no in-game recap of previous games.) After being defeated by the Banished (an alien cult who has taken over Zeta Halo and plans to destroy humanity), Master Chief is left drifting in space. He is then stumbled upon by a stranded pilot. After being rescued, Master Chief insists on heading to Zeta Halo to take it back from the Banished. The Banished mostly feel like the Covenant from the first three games, but with a new coat of paint, with it using all the same alien species and vehicles. The story isn’t the most interesting in the series, but it does its job well enough.

The gameplay of the campaign is heavily open-world. Aside from needing to play some story missions in a certain order, you can explore however you want. When you’re not doing story missions, you can rescue stranded marines, capture bases and outposts, and defeat optional bosses. Doing these allows you to unlock new weapons and vehicles that you can freely summon in at certain areas. Speaking of vehicles, the open word lends itself perfectly to Halo’s broken (but hilarious) vehicle physics. Unlike in multiplayer, equipment here can be used infinitely after a recharge and even upgraded. The Grappleshot feels specifically designed for the campaign, allowing you to scale mountains and grab faraway items.

My only major complaint about the campaign is that certain features aren’t added yet. These include multiplayer and the ability to replay missions. Without being able to replay missions, certain collectibles can be missed. These features are promised to be added eventually, but it doesn’t feel right to not include them at launch. While 343 is at work adding these features, they should also work on the stability, as Halo Infinite has crashed on me a few times for seemingly no reason. 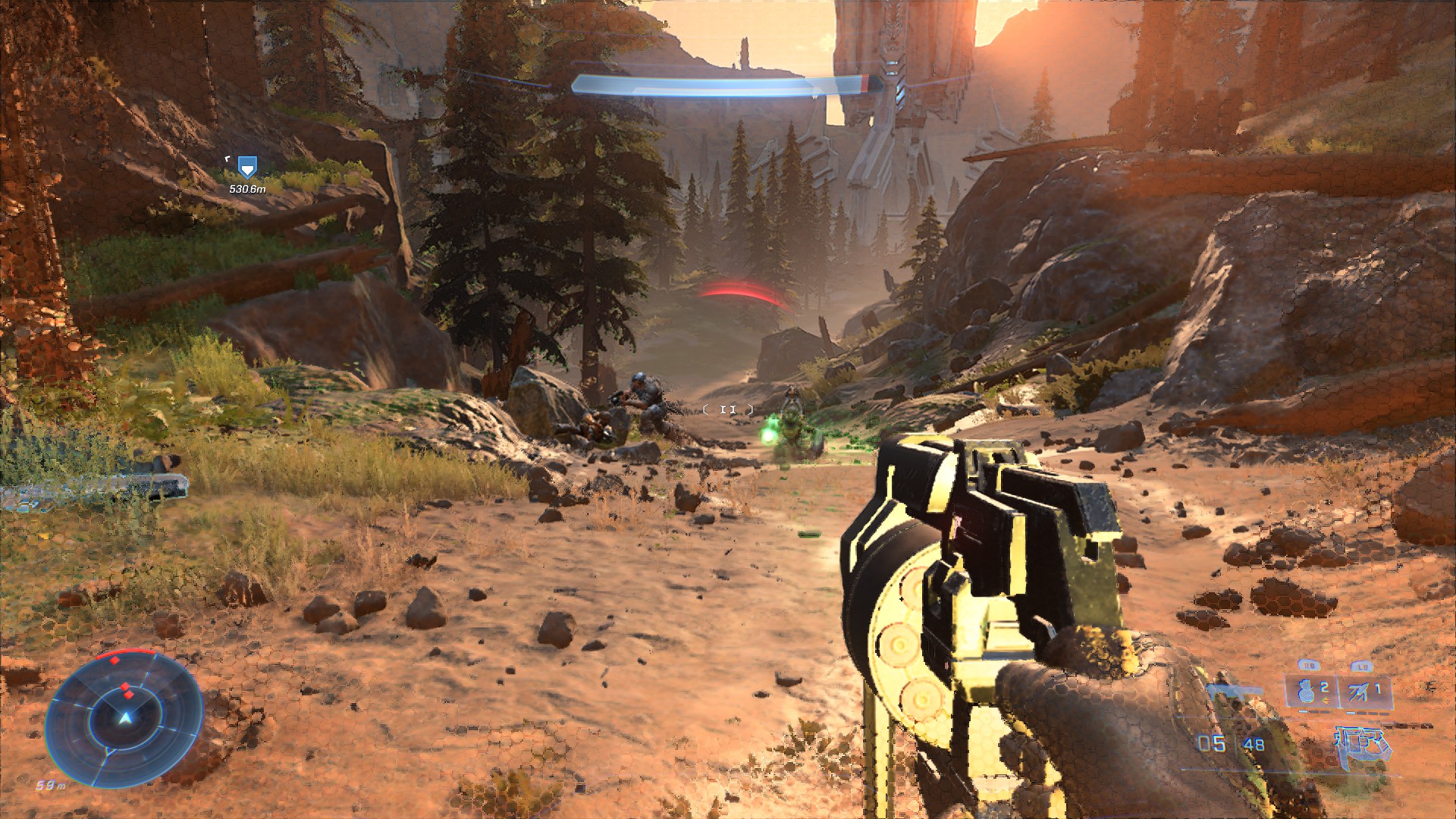 Halo Infinite’s artstyle more closely resembles the entries developed by Bungie than 343’s previous games, especially by using old weapon and vehicle designs. Aside from a few interior areas, the campaign only ever uses a forest and mountain biome. While the forest theme is iconic to the series, it wouldn't have hurt to have a little more visual variety. The framerate also drops when in the main world of the campaign.

The sound effects from guns and vehicles are much more realistic than in previous entries. Along with the announcer and his silly lines, you can unlock and customize various A.I.s that talk to you during multiplayer matches. Upon playing Halo Infinite for the first time, I was immediately blown away by the soundtrack. The new songs and remixes of old songs combine Halo’s iconic drums and choirs with post rock.

Halo Infinite is only rated T, instead of the usual M the series is traditionally rated. You kill players and aliens with weapons such as realistic and futuristic guns, futuristic swords, and explosives, and even run over enemies with vehicles. Bodies don’t disappear for a long time after death, and some of the futuristic weapons disintegrate bodies. There is some blood, though thankfully not as much as previous games. Characters in the campaign frequently use words like h*ll, d*mn, a**, and p*ss. The skull that you hold in Oddball has flames coming off of it, which makes me feel uncomfortable. There are also skulls just like it to collect in the campaign. Many of the Banished vehicles are named after supernatural beings, like ghosts and banshees. Similarly, Master Chief is frequently nicknamed “Demon” by enemies.

Halo Infinite has become my favorite entry in the series. The multiplayer removes and changes controversial mechanics to make the most refined entry the series has seen, and the open-world campaign is a nice refresher from the linear campaigns of before. I just wish the multiplayer had more modes and features, and I especially loathe the overpriced cosmetics. The moral content is slightly tamer than previous entries, but still includes a lot of violence and frequent language. You have nothing to lose if you want to try the multiplayer, and I think the campaign is well worth $60.