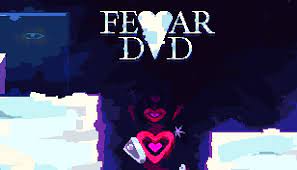 Fewar-DVD is an top-down survival arcade game where you play as a sentient heart and dodge a variety of traps. I find it comparable to Pac-Man in game-feel due to having similar movement restrictions and constantly being chased down by red swords. Fewar-DVD is imperfect in a lot of ways but ends up being one of the most visually interesting games I’ve played in a while and has a very addicting gameplay loop.

The goal of Fewar-DVD is to simply get to the end of the game, dodging obstacles and collecting treasure. At least, that’s your starting goal, but I’ll explain the looping aspect of the game later. There are 5 different areas each with their own little quirks, such as the first area’s large swinging axes or the walls being made of swords and other sharp objects in the fourth area. The rooms are pre-built patterns that are randomly slapped together and have some treasure thrown into a couple rooms and a key to unlock the blocked off-center room. To get to the next level you have to grab the key and travel into the eyeball in the center room, rinse and repeat 15 times. The run variety mostly comes down to the item placement and general level design, making for a very simple gameplay loop.

Along the way you can find shops that contain a few different upgrades. There isn’t a large variety of these, but the items sold there are incredibly useful. Generally, I find it almost a necessity to pick up the heart shield that orbits around your character and blocks damage for you and the revive item that gives you a second wind. There are also things like a compass and a big sword that you can use to break traps.

The endgame content is where Fewar-DVD shines. In the Interim area you have a choice to either end your run, or you can keep going, looping back to the first area of the game. When you loop, the game gets progressively more difficult, adding more traps to dodge and blocking off corridors with toxic black walls. The constant increase in difficulty forces you to play more and more carefully, and the game slowly goes from being hard to brutal. There’s also a secret area hidden behind looping that provides a very fast reaction-based challenge and messes with the order of areas you proceed to. I find that looping mechanics are executed perfectly here, and are what causes this game to be so addictive; the push to survive for longer and longer.

There are a few issues and weird inconsistencies with the game. There’s a lack of control and video options. I’ve found that Fewar-DVD plays differently between mouse controls and a controller. With a controller you’re able to actually slow down your character’s movement speed while on a mouse you always move at a set speed. There’s also a bug in the game that causes it to crash upon loading a level that happens randomly and often enough to end a good chunk of runs. A nit-pick I have is due to not being able to ever stop moving, your spawn placement can be kind of iffy in a couple of the areas leading to almost guaranteed damage upon entering a new level, but I’ve found you can prevent the needless hits by moving your mouse cursor to the center of the screen during the loading screen.

The visuals and audio are incredible. The top-down view of the world has a very grainy and edgy look to it, it feels eerie and unsafe. The game is incredibly vague about what it’s trying to be from a thematic standpoint, but it also makes sure that all important information is plenty visible. Everything is oddly clear despite being covered in murky filters, and you add on screechy, crunchy sound effects on top of that with upbeat electronic music blasting and it becomes a very unique experience. Morally there isn’t a ton going on to cause concern.

There are routinely symbols on the ground that you use to travel and getting your heart-shaped player stabbed is a common occurrence. I am actually surprised the game doesn’t have an ounce of blood around or any explicit messaging considering the theming, but the game remains relatively clean.

Fewar-DVD is far from a perfect title, however, it is a unique little gem that provides a difficult challenge and a great gameplay loop that keeps you coming back. For the asking price I’d say it’s easily worth trying the game for yourself despite the issues.