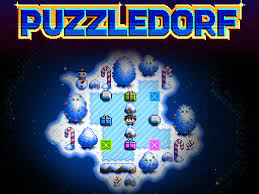 I would like to thank Stuart's Pixel Games for the review key to this title.

Sometimes, you just want something simple to play. Classic puzzle games aren't overly complicated but can entertain for hours. The classic box pushing puzzle game is especially fun if set up well, and Puzzeldorf is short, sweet, but immensely satisfying.

Box pushing puzzle games are not overly complicated, such as Sokoban. Typically, they involve a top-down perspective (in 2D or 3D) in which your player character must push one or more boxes onto certain points to clear levels. Its non-computer game antecedents have existed for far longer and have similar rules and Puzzeldorf is not too much different. Each level allows you to push but not pull blocks, you have limited space to move, and if you screw up by pushing blocks into corners, you will have to restart the puzzle. Ideally, the player will want to push all the blocks onto the points they belong in using as few moves as possible. Like the non-computer versions, Puzzeldorf also encourages the player to finish levels in as few moves as possible, giving the player an incentive to replay levels to win them in fewer moves than before. 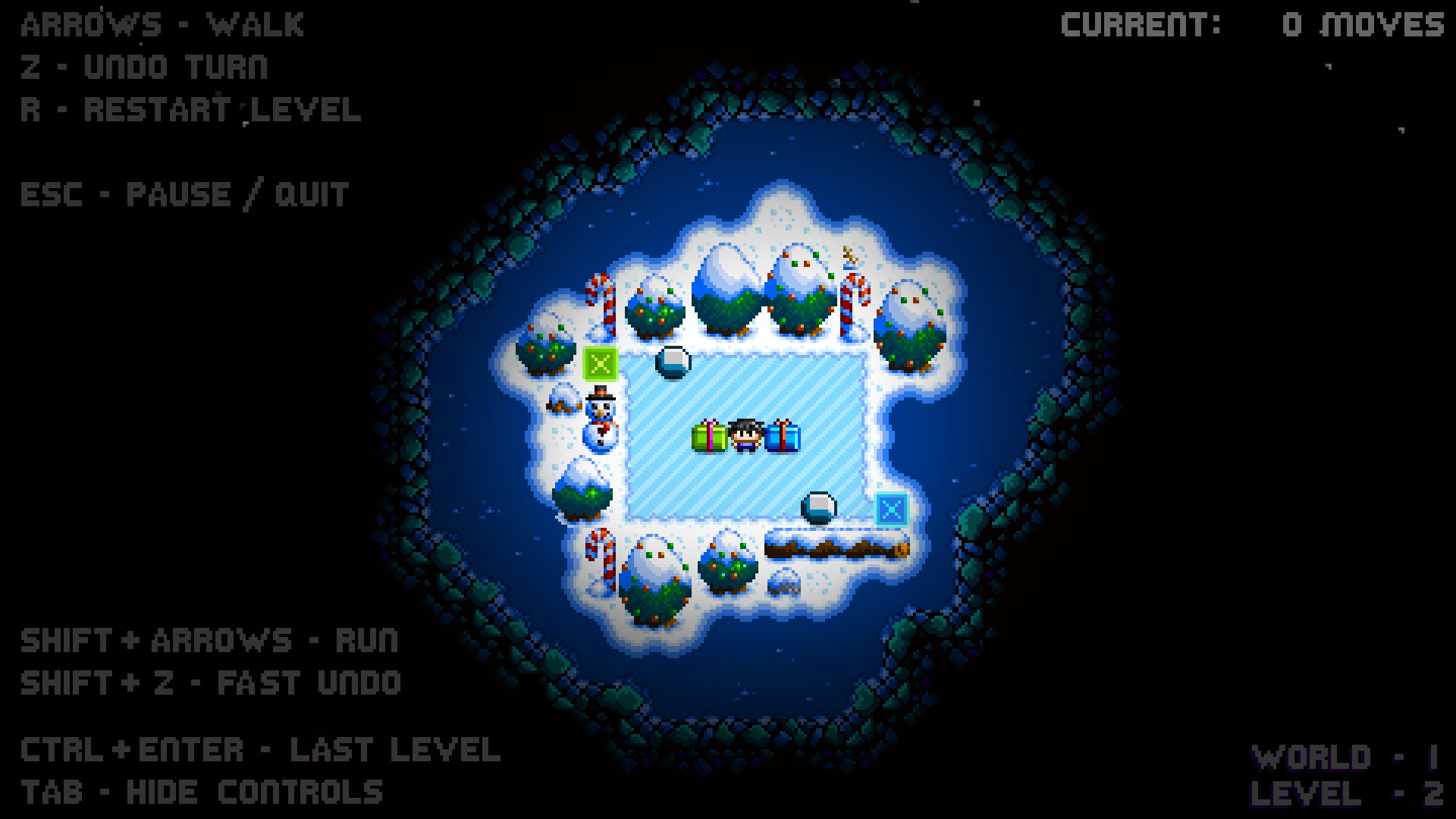 Strong Points: Good puzzle and graphical design; nice musical score
Weak Points: Rather short (can be finished in a couple of hours if you are good at puzzles)
Moral Warnings: None

Puzzeldorf has two "campaigns" available. One is a short series of levels with a Christmas theme, and the other is a series of levels grouped in "worlds" of increasing difficulty. In both, you control a pixelated human-like character who pushes the various blocks (of various distinct shapes for the color blind) onto their correct locations (marked with the same shape as their required block).

Graphically, it uses a cartoony, pixel art style that is simple, vibrant, and distinctive. The idea was obviously to make something that would be cute, inoffensive yet appropriate to the game concept, which the graphics have met with flying colors.

Sounds are generally nothing special, mostly bumping noises and a few blips and bleeps. The music, on the other hand, is peppy yet pleasant, featuring a nice array of synthesized instruments with soothing tones. 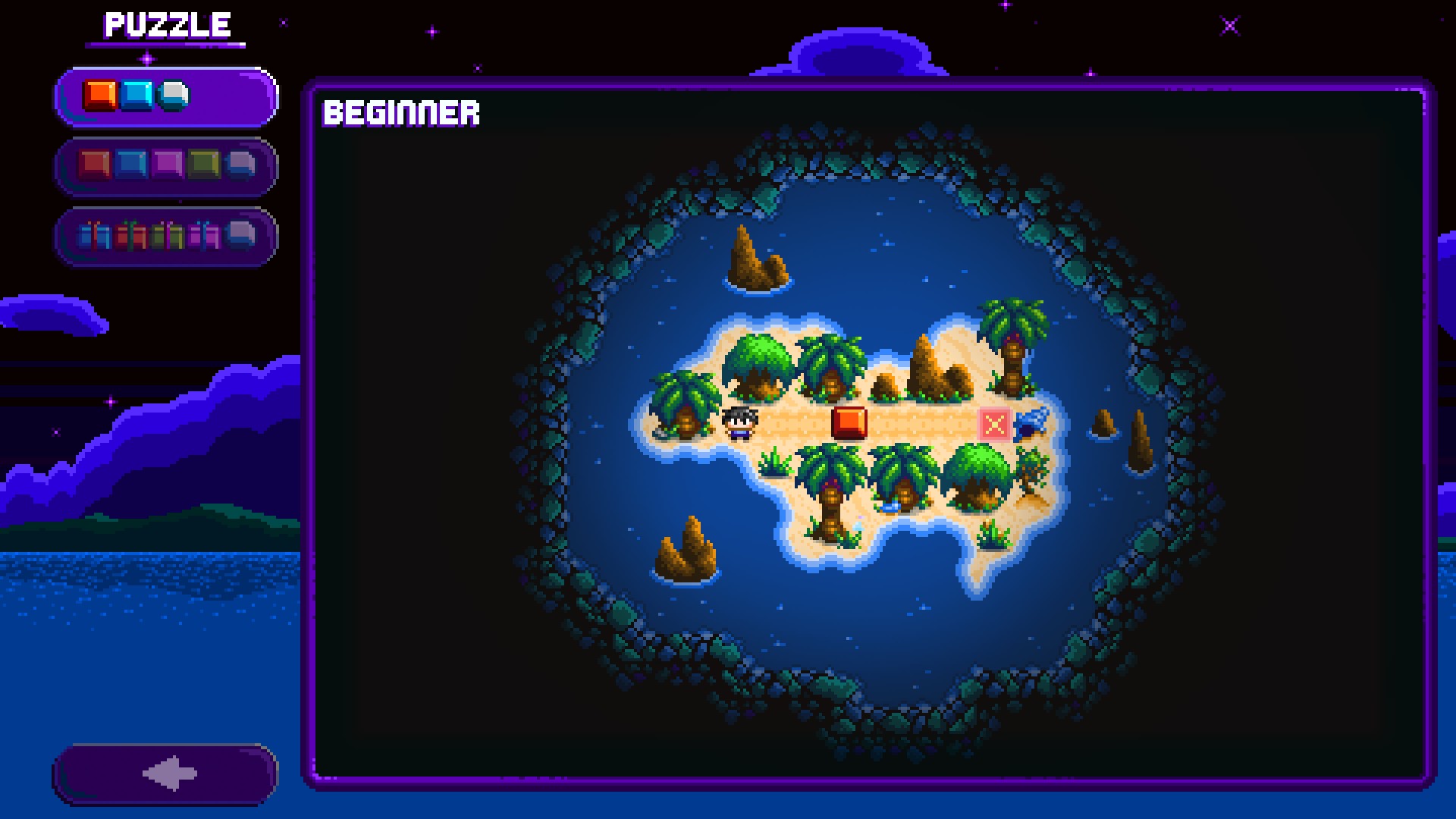 This game is perfectly playable with a keyboard but also has support for all types of compatible Steam controllers, but given all you need to do is hit a few menu buttons and use the direction controls to push boxes, the controls are easily figured out in a few minutes. The restart puzzle option is as simple as hitting the R key on the keyboard (or it's equivalent on a gamepad), making them easy to redo.

Stability is excellent. The title uses the Unity game engine and is quite stable, running without any discernable issues on Windows. Testing on Linux via Steam Proton worked fine out of the box as well.

Morally, I'm pleased to say this is perfect. The game developer is Christian themselves and claimed there was nothing morally offensive, and they proved as good as their word.

Overall, this is a good game, if rather short and sweet that is worth its asking price. Morally, it is appropriate for all ages.