I would like to thank ZHANG FAN for the review key to this title.

One interesting science not many people are aware of is "disaster science", or the science of studying disasters so that their effects are better known and countermeasures can be created. Even such implausible events as the "zombie apocalypse" have been studied by various disaster relief and prevention organizations like the CDC, as a just-in-case measure. The game, "Art of Destruction", is a somewhat rough but interesting simulator for the average gamer to perform some disaster science of their own.

The first thing that needs to be explained is that this is a simulator, not a game with any "win/loss" condition, so this is more of a sandbox-style game than anything else. To that end, you can either start a new game on a series of template maps or use the Map Editor to make one of your own to start on. Once the map loads, then you just select the method of destruction for the part of the map you want to watch get destroyed and watch the fireworks.

It sounds simple, but to the game's credit, there are a LOT of ways to destroy things. Summon meteors to smash things, drop huge chunks of hail, fire lasers at specific places, open up a black hole, and so on. One of my favorites is summoning a big Godzilla-like being to smash things. Depending on the complexity of the map and the destructive methods you choose to simulate, it can be rather fun to see just how things explode, fly apart, or fall. 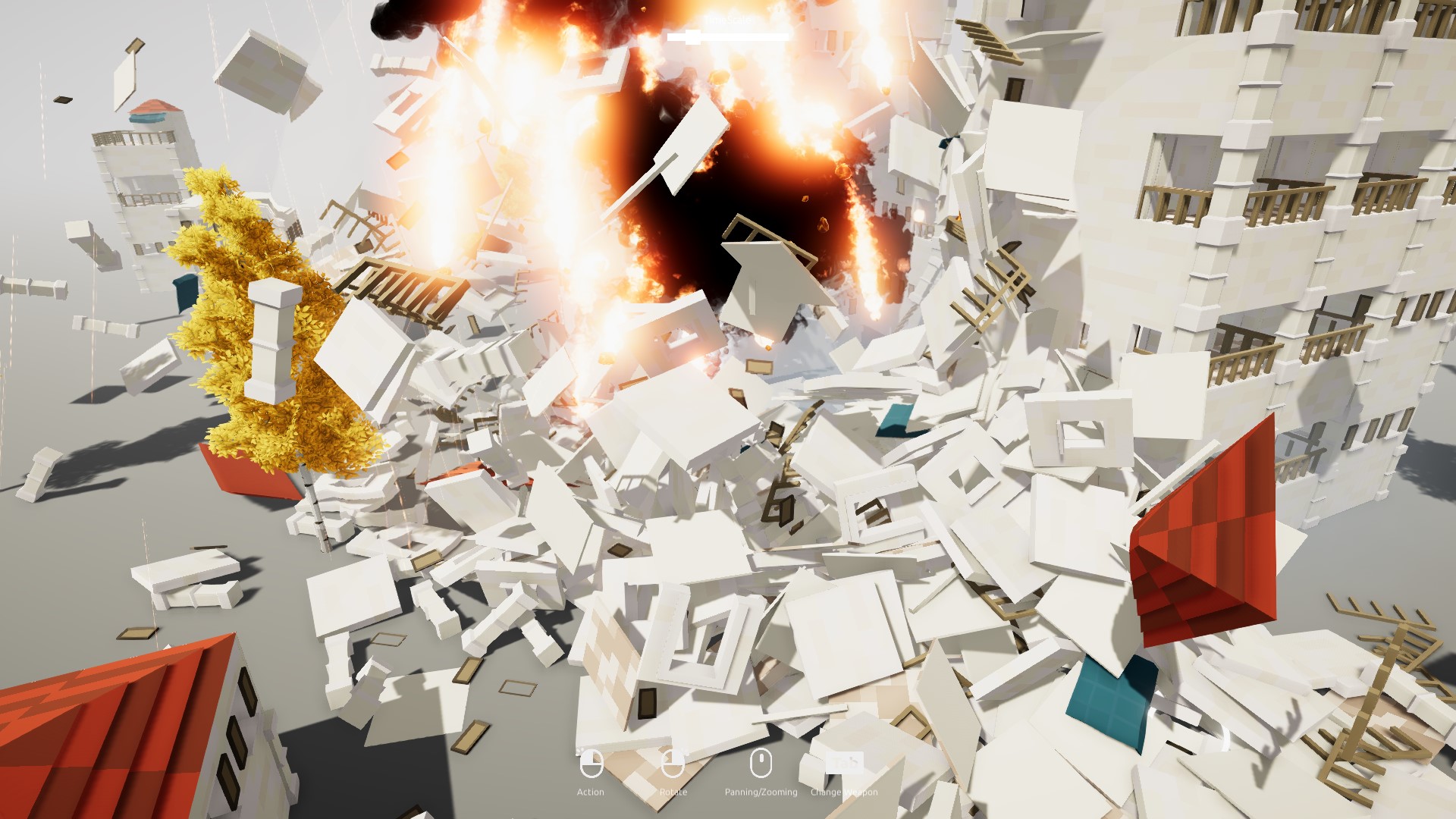 Graphically, everything takes place in a featureless, VR simulator-like void with simple polygonal buildings and structures, albeit well detailed enough so that you have a decent idea of what they are supposed to resemble. It's a small game, so the lack of super fancy graphics beyond what is necessary is generally fine, though I admit some of the destructive effects are a bit underwhelming looking.

The game is controlled by a keyboard and mouse. The mouse generally controls movement around the maps and places things in the game map editor, while the keyboard is used to select objects and toggle the mouse wheel style selector for the various methods of destruction. When utilizing any means of destruction you can target, the mouse is used to control your aim.

The game has no music to speak of, though it does have some basic sound effects, and these feel a bit uninspired. While mostly sufficient, certain explosions and impacts come off very weak and even nonexistent (using a rocket-propelled grenade should have produced an explosion noise from the impact, which you don't get). The noises of things falling apart can be good, but again some feel underwhelming, especially for things like hearing an entire building fall down.

Stability-wise, this runs well on Windows and Linux natively, though I do not have a Mac. It uses the Unity engine and is well optimized, loading rather fast and I experienced no crashes. There can be some minor slowdown when tons of objects are in motion, but this clears up quickly and generally occurs to avoid overstressing the processor. 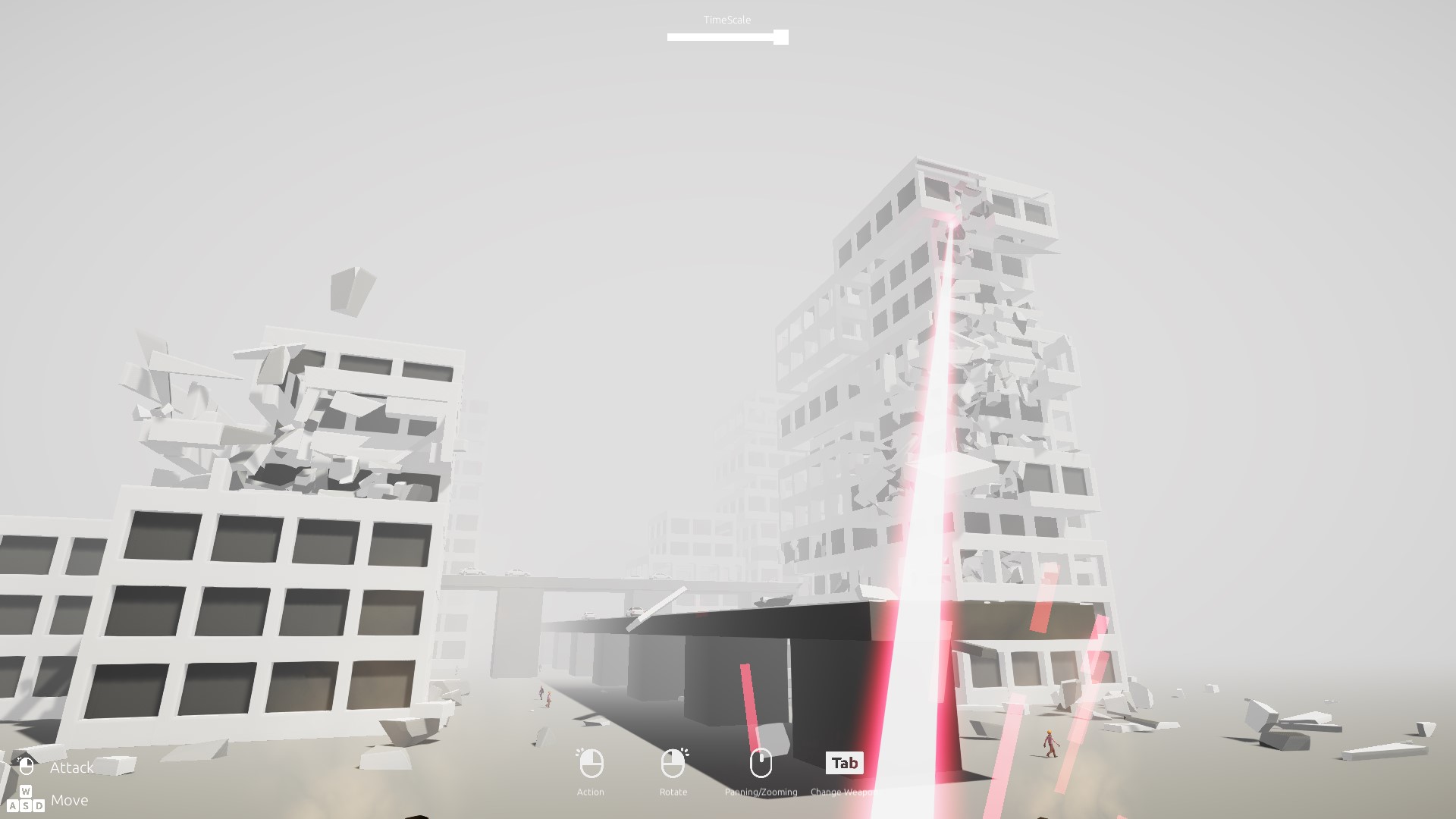 Morally, this does have some concerning elements.

First off, the hook of the game is on various ways to destroy objects and property in the context of a simulation. There are many methods, including summoning natural disasters like volcanic eruptions, firing lasers, summoning a giant-like figure to smash things, setting off a nuclear explosion, and so on. Except for zombie-like figures, no identifiable person (what few there are like zombies with different walking animations) is harmed in the featureless VR sim-like void the game objects reside in. The zombies themselves are a disaster element for a "zombie apocalypse" style scenario, and most just look like mostly featureless polygonal figures shuffling around.

As for whether the zombies are of the sci-fi style or more of the occult and supernatural type, the game leaves this unaddressed. Otherwise, there is no foul language, sexual content, or any notable moral and ethical concerns.

Overall, this is somewhat recommended. It feels a bit basic and underdone so far, but it does have the potential to be entertaining and educational in limited doses. Morally, aside from the simulated destruction and the zombies, it's generally appropriate for most older children on up. If you want to see where this disaster sim goes, it may be worth purchasing, especially given its very cheap price.