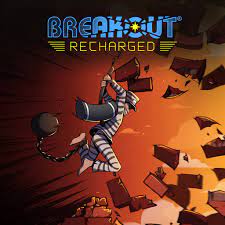 I have fond memories of Breakout, mostly from the Atari 2600 that I played it on as a child. (Yes, I'm old.) This was one of the games that was really well suited to the paddle controllers - basically a wheel that you turn to move the on-screen paddles to wherever you like as quickly as you can turn the knob. It was a control scheme that early arcades and home consoles offered, but hasn't stood the test of time.

For those not familiar with Breakout, it was a very simple early Arcade and Atari 2600 (and others) title where you control a paddle on the bottom of the screen, and various bricks are shown at the top. A ball is then released, and it bounces off of anything it touches - the wall, the bricks above, or your paddle. While the walls remain unharmed, the bricks are broken if hit, and your goal is to clear the level of bricks. If the ball gets past your paddle to the pit on the bottom, you die. Over time, depending on the version of the game (Super Breakout has some more features), the bricks may move down on the screen, in an almost Space Invaders-like fashion, to make things even more difficult. Early versions of the game are quite difficult, as the ball moves very quickly, and your paddle is quite small.

Breakout: Recharged is an update for modern platforms, along with some newer ideas to keep things fresh. While the original games used simple raster graphics, Recharged uses a stylized vector-like art style, and goes for a flashy aesthetic, not unlike other classic modernizations like Space Invaders Extreme or Pac-Man Championship Edition. For example, when an exploding block is hit, the screen shakes. The backgrounds feature moving lines that look really neat and give it a retro-futuristic look. Good stuff, even if that art style was classically used in other Atari games, like Asteroids.

While virtually any system can likely run this game perfectly - even an old laptop running Linux has little trouble - I must say that PCs (of any kind, Windows/macOS/Linux) or Atari VCS are likely going to be the best experience. Not because of frame rate or any performance reason, but because of mouse controls. On consoles you are pretty much limited to gamepads; on PCs, you can use a mouse, which closely resembles the speed of a paddle controller. The Atari VCS's classic controllers have a rotatable joystick, which also simulates a paddle, perhaps even better than a mouse. While I don't have access to an Atari VCS (the modern version, I mean), I can't imagine them missing the ball on that one... it would be criminal.

With massively updated graphics comes a much larger playing area, and everything else is larger, too. The paddle (that you control on the bottom of the screen, not your paddle controller) is larger, the ball is larger, and the bricks are, as well. The ball is also a lot slower than it was in the old days, so the difficulty is also much more manageable. I had little trouble getting to the moving ball in time - unless I messed up, missed, or some other obstacle got in my way, like a blast from a turret, which can be quite the challenge on some levels!

The game consists of Arcade and Challenge modes, which is where most of the content is. Arcade is pretty much what it sounds like - keep going until you run out of lives. In Arcade mode you choose which submode to play: Recharged, Classic, or Classic Recharged. In Classic, you simply play Breakout with no power-ups, and you have three lives. In Recharged you only get one life, but you still get some of the many upgrades that are littered throughout levels. Classic Recharged is both - you get power-ups and three lives, obviously making this the easiest mode to do well in.

Power-ups are one of the major changes to Breakout since the classics, though not at all unfamiliar to players of other brick breaker games. Arkanoid (by a different publisher, Taito) famously moved the genre forward with power-ups in the late 1980s, and this game has a similar idea, with a twist. Certain bricks, that are typically blue, release a power-up when broken. When caught, you get that power-up for a limited time. Unlike Arkanoid, where you used the power-ups in some cases by pressing a button, these are used automatically on a timer. This is a nice twist, since Arkanoid had an action button, while Breakout does not. These power-ups definitely can help you survive, with things like a longer paddle, the rather odd time warp, or several different paddle-based weapons that all really come in handy. One power-up that took a while to figure out is one that changes a small number of bricks into exploding ones randomly in the play space. This is both more useful than it seems, and easy to miss if your eyes are focused on the ball most of the time.

As great as power-ups are in Arcade mode, they really come to life in Challenge mode. There are fifty Challenge levels, each with a different level layout and goal for completion. These can vary from just clearing the screen to getting to a certain point value to breaking a number of bricks with a weapon or even with exploding blocks. These are all well designed and exercise different skills to master. I enjoyed completing them all in solo mode, and my son and I also had fun playing around twenty of them together in co-op mode.

All modes support co-op, and it's great fun. You split the screen down the middle, with the first player getting the left hand side of the screen, and the second getting the right. Unfortunately, player two can only use a controller - mouse input is limited to player one. This does make sense, but gives player one a massive advantage - but one that's worth taking advantage of anyway, because both players benefit if either one does well. You also start the level with two balls in play, which is normally not easy to get unless your level happens to have the three ball power-up. It can be nervewracking if one of the two players keeps letting the ball get past them though! 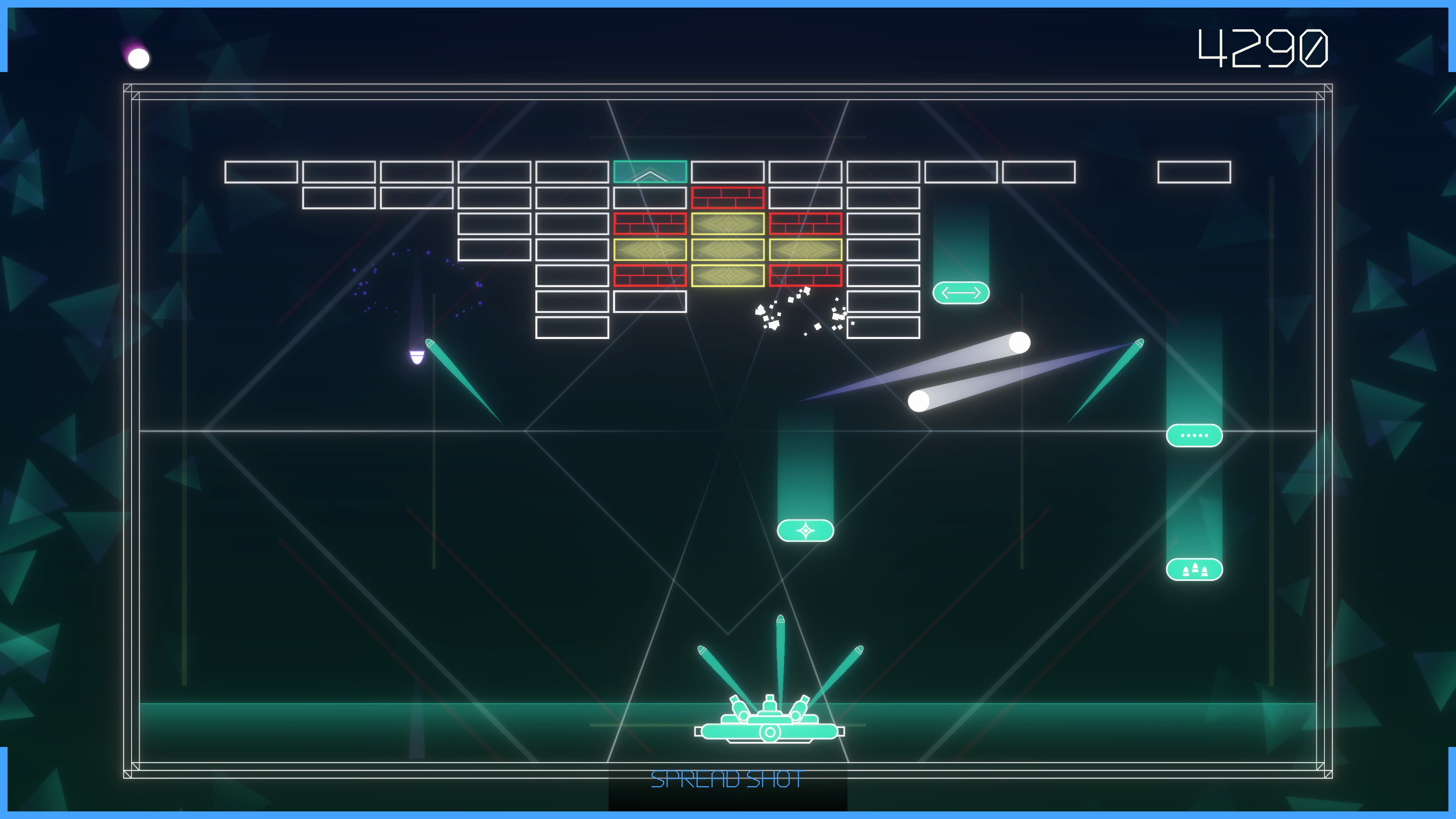 Despite all of this good stuff, there are a few issues worth noting. First of all, I ran into a few bugs. (To be fair, there has been a patch released since my testing, but I don't know what was fixed since there is no changelog.) My in-game achievements and Steam achievements are out of sync, which is annoying, and in game, all of them were unlocked - but on the flipside, I didn't get credit for completing every solo challenge level, either. A more serious bug for users of dual monitors, or windowed mode, is that the mouse control seemed to be based on the mouse pointer behind the scenes, and if you have more than one screen (or the window takes up less than all of it), you can move the mouse outside of the play area, and even onto the other screen. This can really mess you up when your paddle becomes unresponsive for unknown reasons. Once I realized the issue I was able to adjust how I played, but it definitely tripped me up at first.

Because of the gamepad support (and console versions as well, presumably), the ball speed is a lot slower than I expected, in part because of my experience with the classic versions. After playing this one, I launched Atari Vault, a Steam game that has one hundred old Atari classics in it, including the Arcade version of Super Breakout, and the Atari 2600 version of Breakout. And my suspicions were confirmed: those games feature a much faster ball. This makes sense since paddles are so sensitive, but this means Breakout: Recharged feels a bit slow in comparison.

From a technical point of view, outside of the bugs I noted before, it runs well. I found the Windows and Linux versions both play great, and my laptop has a 240Hz screen, and this game supports a 240Hz mode, which looks fantastically smooth. One of my laptops is quite old; old enough that I only put Linux on it, and it plays Breakout: Recharged quite well, though turning off effects reduced stuttering quite a bit; ironically it stutters more in the menu than it does during actual gameplay. The lack of Steam Cloud is sorely missed though, as my desktop has made tons of progress, but these other PCs all have to start from scratch. Thankfully, in Arcade mode that doesn't matter much, since you always start from the beginning regardless.

Morally, this game is as clean as it gets - the paddle can blast bricks, and certain turret-bricks can blast your paddle. Stuff can also explode.

Breakout: Recharged is a game that I grew to like more than I did at first. It's not going to shake the gaming world, certainly, but sometimes you're in the mood for some simple fun, and Breakout: Recharged definitely fits that bill. The price is also reasonable, which is a great plus. The music is good, though it can definitely get repetitive, but it's really not a major issue. If you love classic games like Breakout, then this is an absolutely solidly modernized version, despite being a bit slower paced, thanks to the death of paddle controllers. If you enjoy arcade classics, then it's highly recommended.