I'd like to thank September Games for the review key to this title.

Way back in 1981, a Japanese game developer got inspired after helping a frog cross a road to make "Frogger", a game where you have to help frogs defy various obstacles to get across a road to safety. The basic concept has been varied a bit and the gameplay mechanics somewhat modified with different themes in mind, but this basic concept has formed an iconic action sub-genre of its own. Crossing Guard Joe is a retro-modern twist on the old concept that manages to be very charming as well.

The game places you (after a dramatic pixel cutscene) in the shoes of Joe, a crossing guard in Monoxide City whose job is to help school kids cross a road without becoming hood ornaments for traffic. Through a series of increasingly hard levels, you must get a certain number of children to cross the road safely, much like the original Frogger required doing for frogs.

The controls are not hard to understand. The two most basic ones are the stop sign and waving hands. The first tells your charges to stop, the second to go. The game is set on a horizontal plane with your character able to move left and right anywhere on the crossing line and sidewalk of the level. The cars come at regular intervals from the top of the screen along the various road sections, making it a challenge to direct the kids who approach the crossing line to get them across the road without any getting hit. This results in a pixel child becoming cartoonishly stuck to the vehicle as it continues down the road if you mess up. Worse, some impatient children will try to cross without explicit instructions, making keeping them out of trouble harder while directing the kids you are already helping. You get a few extra tools to help make crossings easier, but the above is the bread and butter of the gameplay. 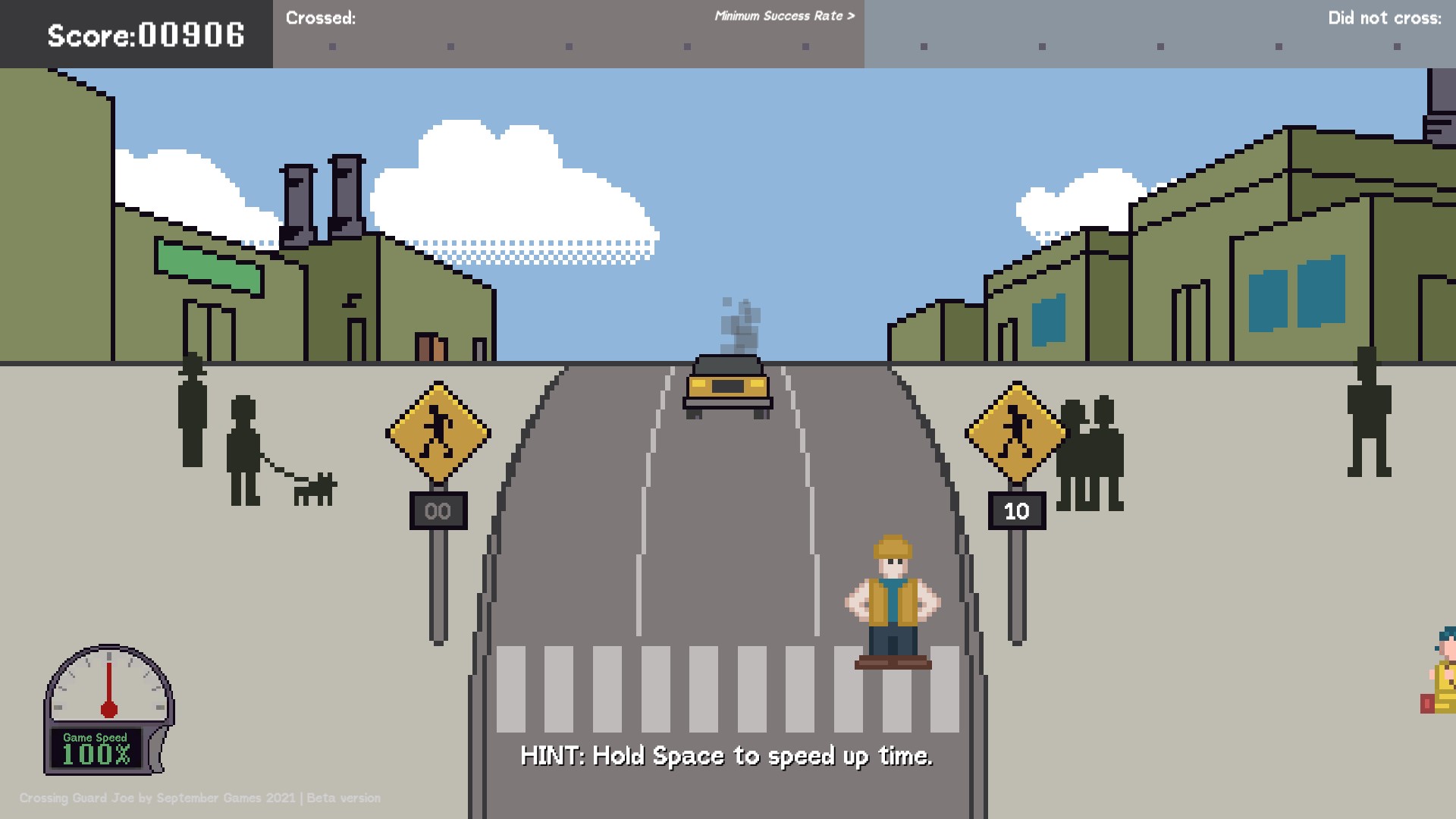 The game has 25 default levels and an unlockable challenge mode after that. Aside from a feature to try and beat the best scores of other players, this is not an overly complicated game, but frankly, given its basis in Frogger-style gameplay, it doesn't need to be.

The graphics are retro-pixel style, much like how the original Frogger looked at release, albeit with the benefit of better colors and modern graphics techniques. The animations are silly-looking and drawn with obvious loving care. My favorite is when your crossing guard gets bumped by a vehicle, he hops sideways, obviously nursing his sore bum briefly.

The sound and music both have another retro, chiptune style feel, true to its Frogger inspiration, and I found the main level theme pretty catchy. The voice-overs and sound effects all feel just like an arcade game, which again is faithful to the original Frogger concept. 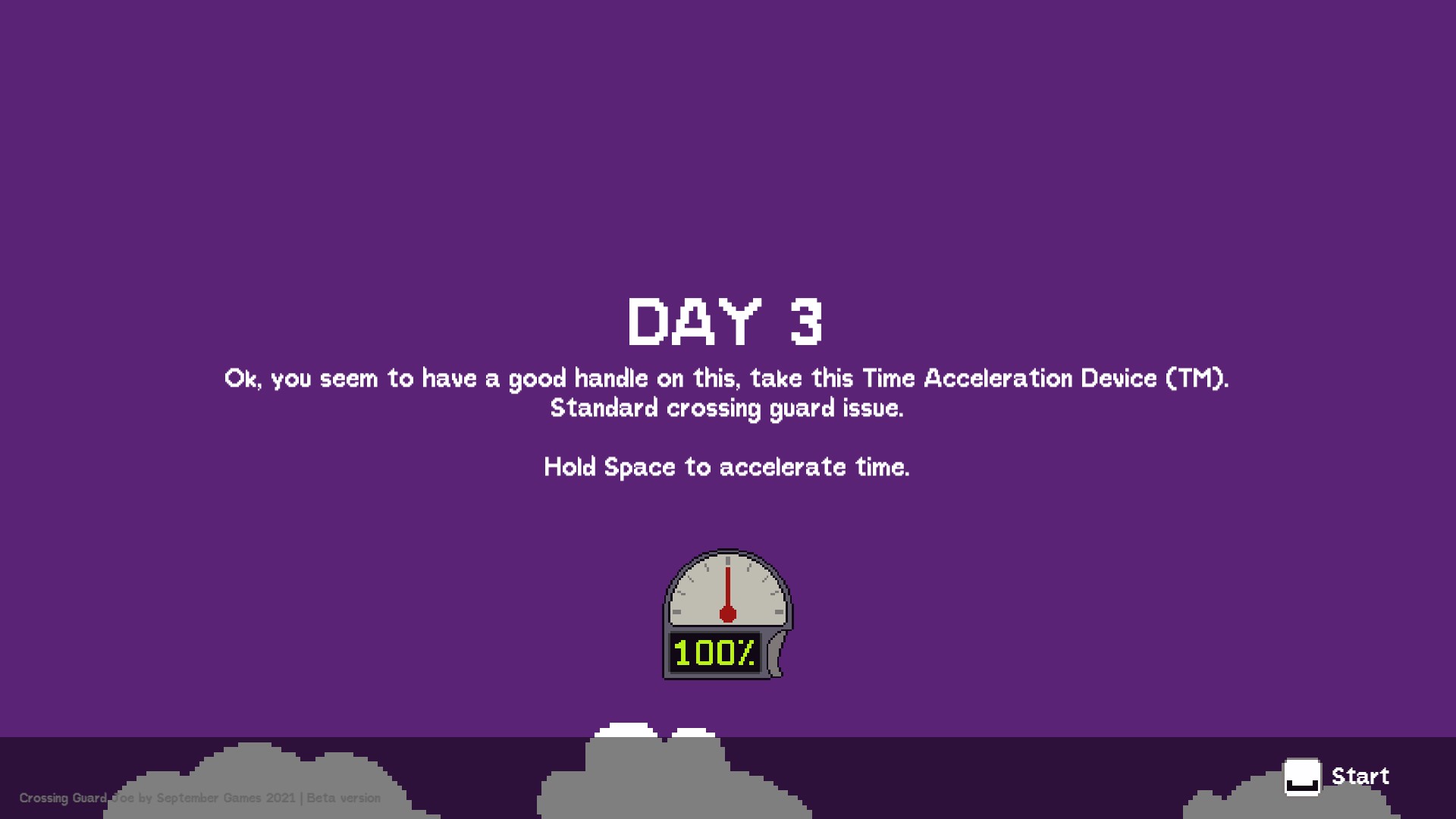 The game has full support for the keyboard and all supported Steam controllers. It only uses a few marked keys/buttons and the left and right directions, so learning the controls is incredibly simple. The game is even kind enough to teach you the basics with a tutorial level to ease you in.

Stability is good. It loads fast and runs well, with requirements even ten-plus-year-old computers could easily meet. Curiously, despite being a very simply coded game, it will not run on Linux via Steam Proton, merely failing silently to load.

Morally, this is nigh spotless. The only possible concern is the fact cars can hit kids, though this is represented in a very cartoony fashion with the car continuing to drive by with the pixel child looking like a hood ornament on the vehicle. Your player character can also be hit and has a similar silly animation where he has to right himself after nearly being knocked off his feet.

In short, it's simple, easy to learn, and if you loved Frogger or other games like it, you'll get a kick out of it. Morally, it's nigh stainless and is suitable for any age.