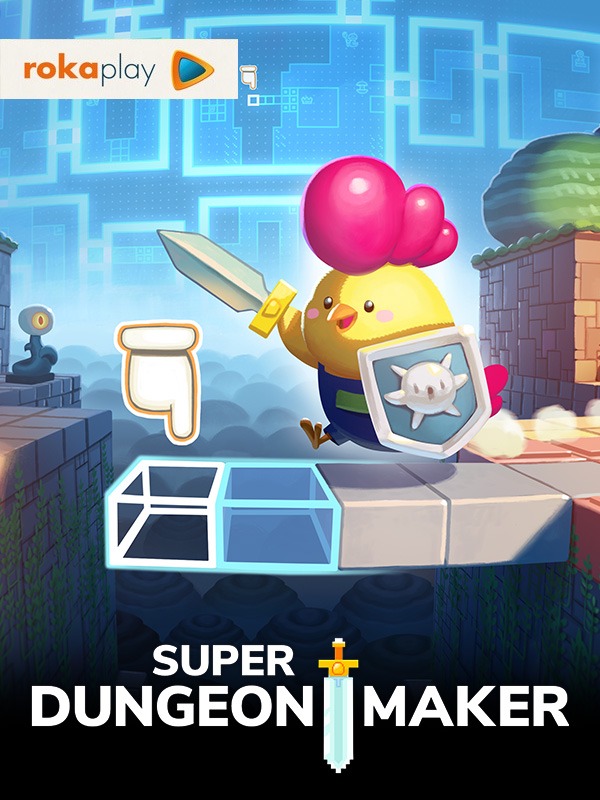 Note: There is a free demo version of this title available. The demo has merely the prologue level of the full game, this review covers the full game (currently in early access).

I would like to thank rokaplay for the preview key to this title.

In the annals of gaming history, the original NES/Famicom game "The Legend of Zelda" pioneered many firsts. Among its accolades, atop being the bedrock of a still beloved game series are creating a successful open-world RPG, popularizing action RPG games that required both combat and puzzle-solving skills, and being such a good game concept that many other projects would try to imitate it if only to recapture the majesty of the original. Super Dungeon Maker is a game that makes a very noble effort to do likewise.

Interestingly, this game ships with a level creator tool to go with the adventuring mode. Both exist under the same game engine, so while you can explore dungeons, in some you can even switch to build mode and change their layout. The adventure mode takes place in a typical, top-down, room-by-room exploration mode like the classic Legend of Zelda games. There is a life meter, hearts to collect to replenish it, and tools to use to overcome obstacles. Your character, a young rooster named Fink, has a sword for defense against dungeon monsters. In this mode, the player must solve puzzles and fight through the monsters until they reach the level exit. 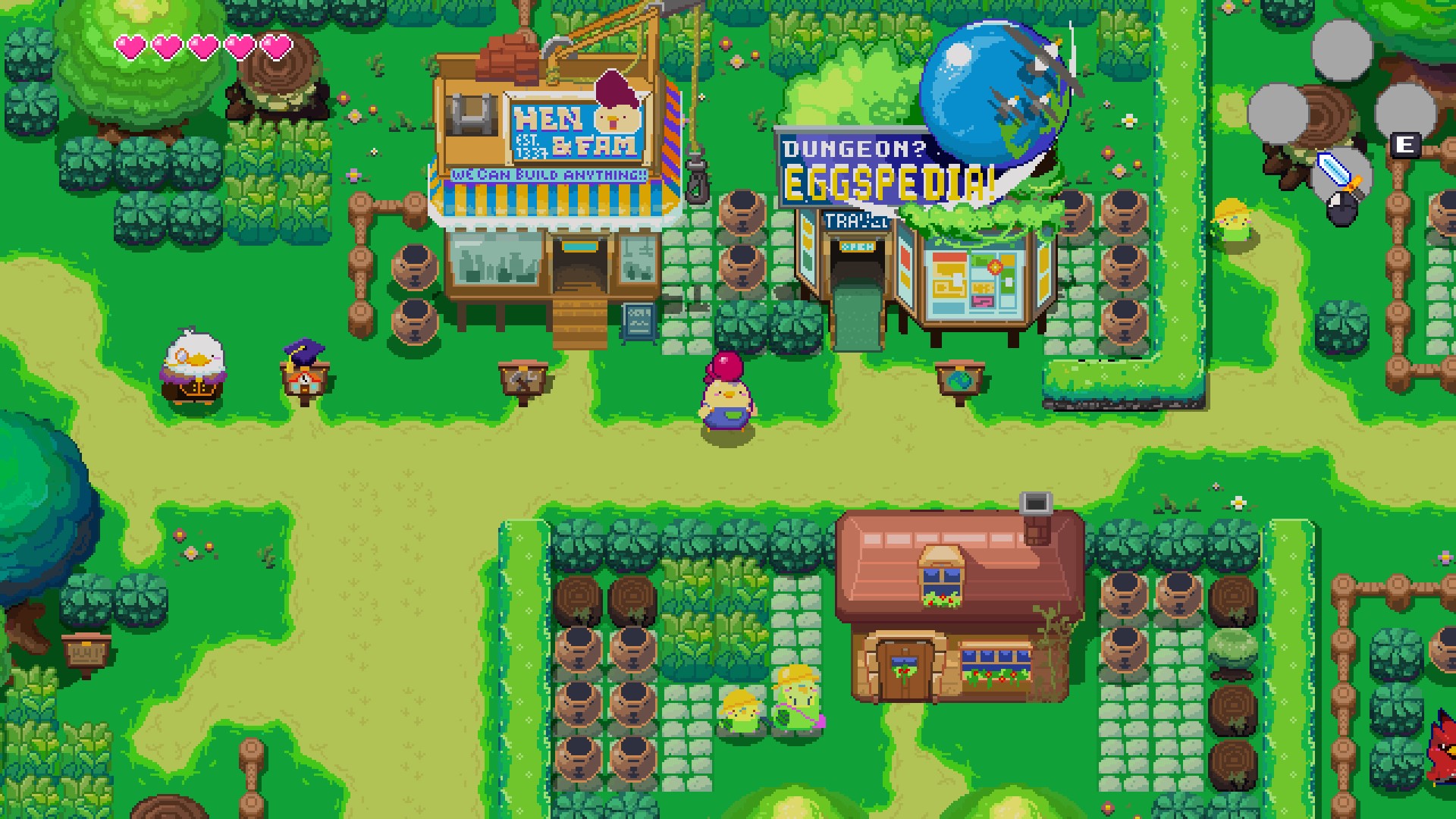 Strong Points:  Excellent homage to Legend of Zelda; charming graphical aesthetic; allows the creation of all sorts of custom levels for the enjoyment of others
Weak Points: Some UI features of the build mode are poorly explained
Moral Warnings: Cartoon violence

The build mode, available after the tutorial dungeon you start in, is activated via a button toggle that switches to a pause mode where you are given options for editing the terrain via a drop-down list. Once the player picks their option, they can move the cursor either via mouse or controller to add, remove, or modify the map with walls, doors, obstacles, items, and so on until the dungeon is designed how they please. Once the player finishes, they can switch back to adventure mode and test the dungeon solvability.

This generally applies to the dungeon build areas (one building in the main game hub for making levels for the benefit of other players and the tutorial building mode dungeon is in the same area). Some other dungeons accessible after the tutorial are merely for more adventuring, giving the player more to do in this mode from the main game hub area. The main game area also has a place to enter that allows the player to try dungeons designed by other players in the adventure mode. The main hub area is a small village with other bird-like beings who dispense basic game advice for both modes and often make more chicken-related puns than you can shake a stick at as well.

The only major complaint I can levy about the general gameplay is that the build mode lacks some better explanation of certain options and would benefit from added tooltips to explain things. The adventure mode, on the other hand, is rather well explained in the tutorial dungeon.

Graphically, the game goes for a cartoonish style with vibrant, hand-drawn aesthetics, resembling the NES/SNES era of games, though the art style is clearly aimed at appealing to a younger audience, especially with the silly looking dungeon monsters and the NPCs. The latter are all bird-themed like your young rooster protagonist Fink and gives this title a very charming kid appeal. 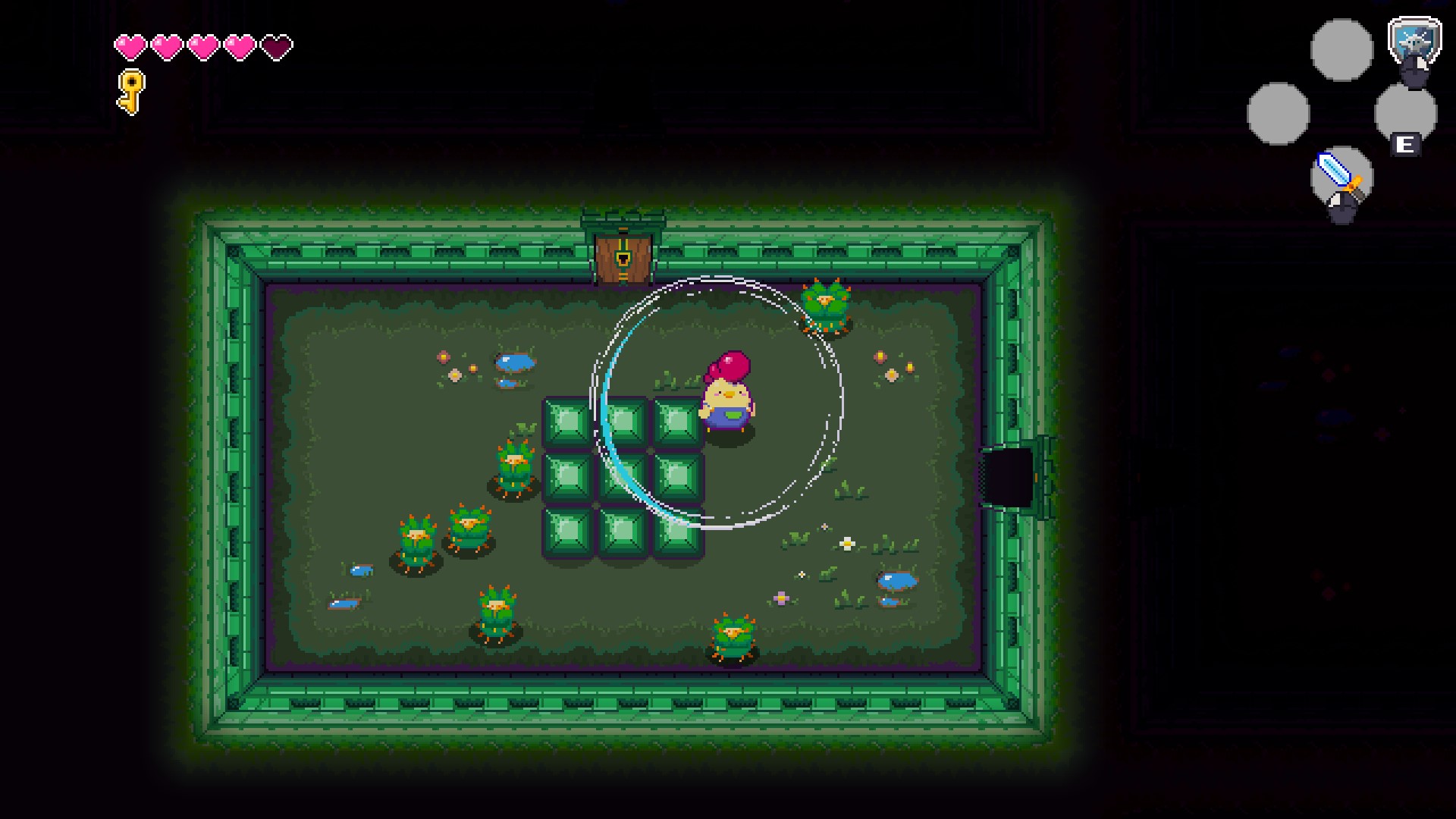 Music has a chiptunes feel, much like the Zelda game this series is clearly inspired by. Sounds have a similar aesthetic, and while none of them really stands out too much on their own, combined they have a retro game touch that made me feel like a little boy playing on a console again.

Control is done with either keyboard and mouse or via a PC gamepad, as the game supports all compatible with Steam. While the keyboard and mouse are quite acceptable, I recommend a gamepad for easier sword use, as the sword swings are timed to the direction of the D-Pad/keyboard directional keys, and the gamepad was more responsive for me. Otherwise, both adventure and game modes work well with either control scheme and are generally explained and marked out well for ease of play.

Stability I'm proud to say is very good. This game uses the Unity engine, and it loads fast and can run on very modest hardware. Tests in Linux gave me excellent results via Steam Proton with native-level performance. The game also features an in-game bug report form for helping out the developers. The developers have also made clear they are very interested in the continual improvement and refining of the game.

Morally, there is little to complain about.

Violence is done in a very cartoonish action RPG style, with enemies disappearing in poofy clouds. While you can use bombs, swords, and throw certain items as attacks, none of it is depicted in a form that would be more offensive than what you might see in a cartoon.

There is no foul language, sexual content, or anything of moral or ethical concern. The absolute closest they get to supernatural content is entirely made-up references to allegedly supernatural beings in the setting that are mainly an excuse to make clever chicken puns and nothing more.

Technically, it's a good game that despite being in early access offers a lot to do, and it promises to bevel off the rough edges with time. Morally, aside from cartoon-level silly violence, this is acceptable for nigh any age group. Overall, it does capture the simple fun of the Legend of Zelda games it clearly aspires to emulate and does so with a lot of charm.