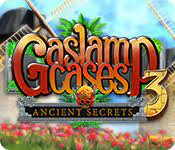 Thank You HH-Games for submitting this through our Steam Curator!

I haven’t played a Match-3 in quite some time, and I’m not the usual guy who handles this genre. The last match-3 game I played was Bejeweled 3 over a decade ago. But the genre is very easy to pick up and understand, so it makes sense why it’s one of the most popular in the gaming world. Gaslamp Cases 3: Ancient Secrets is the third entry to the Gaslamp Cases series, which only started in 2021 so these entries come out fairly quickly.

You’ll follow detectives Morgan Johnson and Jack Brown in discovering a conspiracy that has ties with Incan culture. The two encounter many allies and adversaries in attempts to find out who is causing the bombings across London. There are about five chapters with at least ten levels required to beat as well as purchasing four upgrades to progress to the next chapter. Every level completed earns you stars that can be used to purchase said upgrades. But they’re not upgrades in the sense that one would think. Instead, they are clues that entail more of the mystery and act as another flag so the game will know to progress to the next chapter. The progression is awkward because you have to purchase each upgrade in order and earning stars isn’t affected by how well you do in levels. Even though the number of stars earned and required for upgrades increases after every chapter, some earlier levels in the same chapter will earn you fewer stars than later levels. I ended up mostly forgetting the story beats because you’ll have to play multiple levels before one can even progress the narrative further. It would probably be better to earn all the stars needed, and then purchase the upgrades all at once. 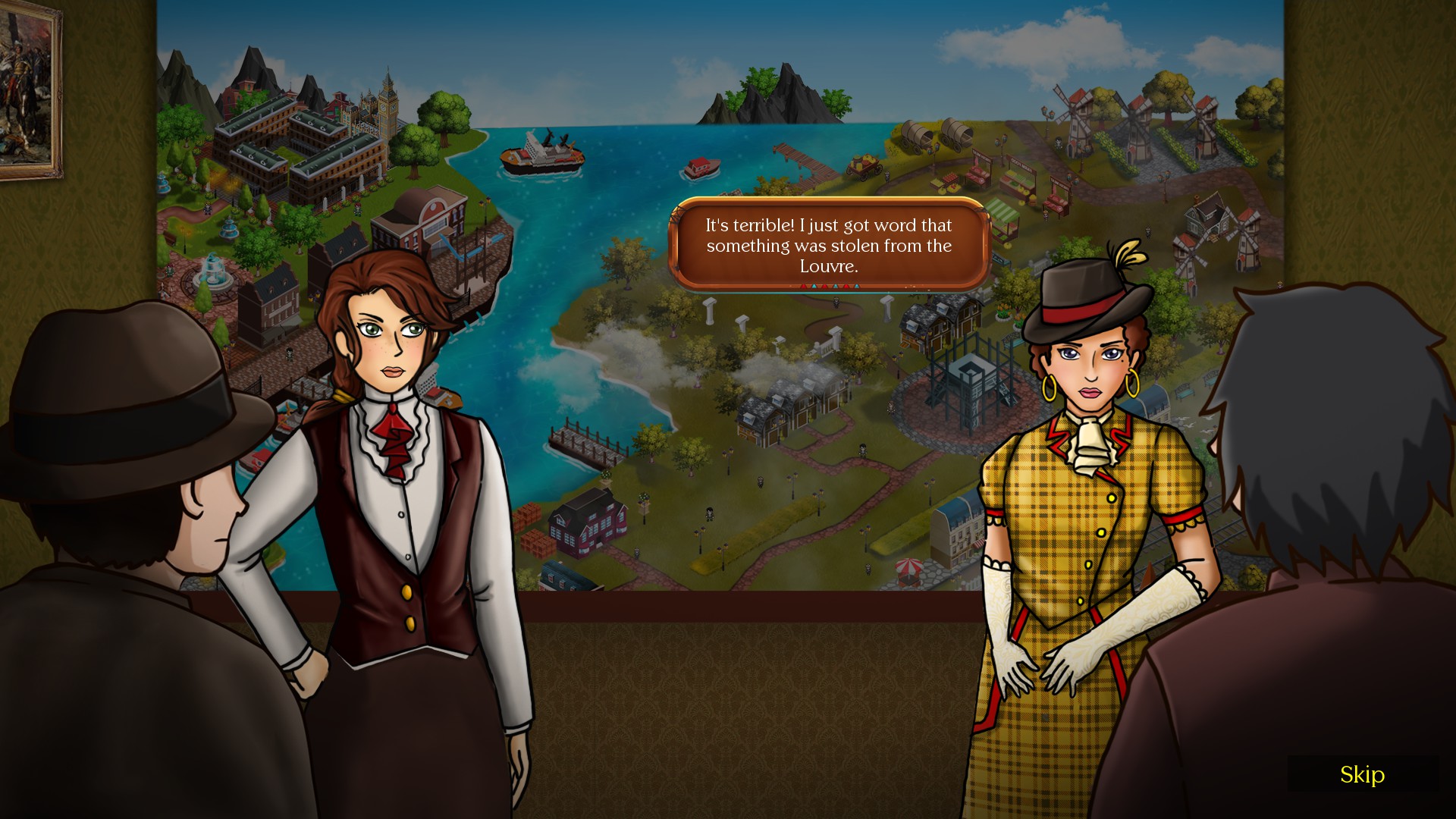 Match-3 games have a simple yet strict style. The only option you have is to move any piece on the grid one space horizontally or vertically. If the single piece moved matches three or more other pieces, the pieces will be cleared and the grid will move downward for more pieces to take their place. Sometimes chain reactions will occur that will cause more pieces to be cleared. If five or more pieces are matched, then a bomb will form in that spot that can take out any piece in a 3x3 area or larger depending on how many pieces are cleared. Every action is controlled by the mouse whether you click and drag or click two spots next to each other to move pieces around. At the beginning of every save file created, you can choose between relaxed mode which has no time limit, and timed mode that puts a timer on every level if you hunger for more of a challenge.

Gaslamp Cases 3 is an objective-based match-3 game; where games like the original Bejeweled series simply have you clear pieces, this one has you clear a specific number of pieces. There are also obstacles of sorts that act as blockades for your movement such as crates that can only be removed if a grid near them is cleared, and ropes that prevent the movement unless matched twice with other pieces. To aid in your process, each level has a limited amount of items in the left-hand corner that have a variety of effects such as a hammer that can clear any one grid, bombs that clear horizontally or vertically, or an interesting jewel that eliminates every piece of the same variety. Some items you’ll have to drag to the area to use them while others are used automatically once clicked. The objectives are an interesting change of pace compared to other match-3 games that I’m familiar with. 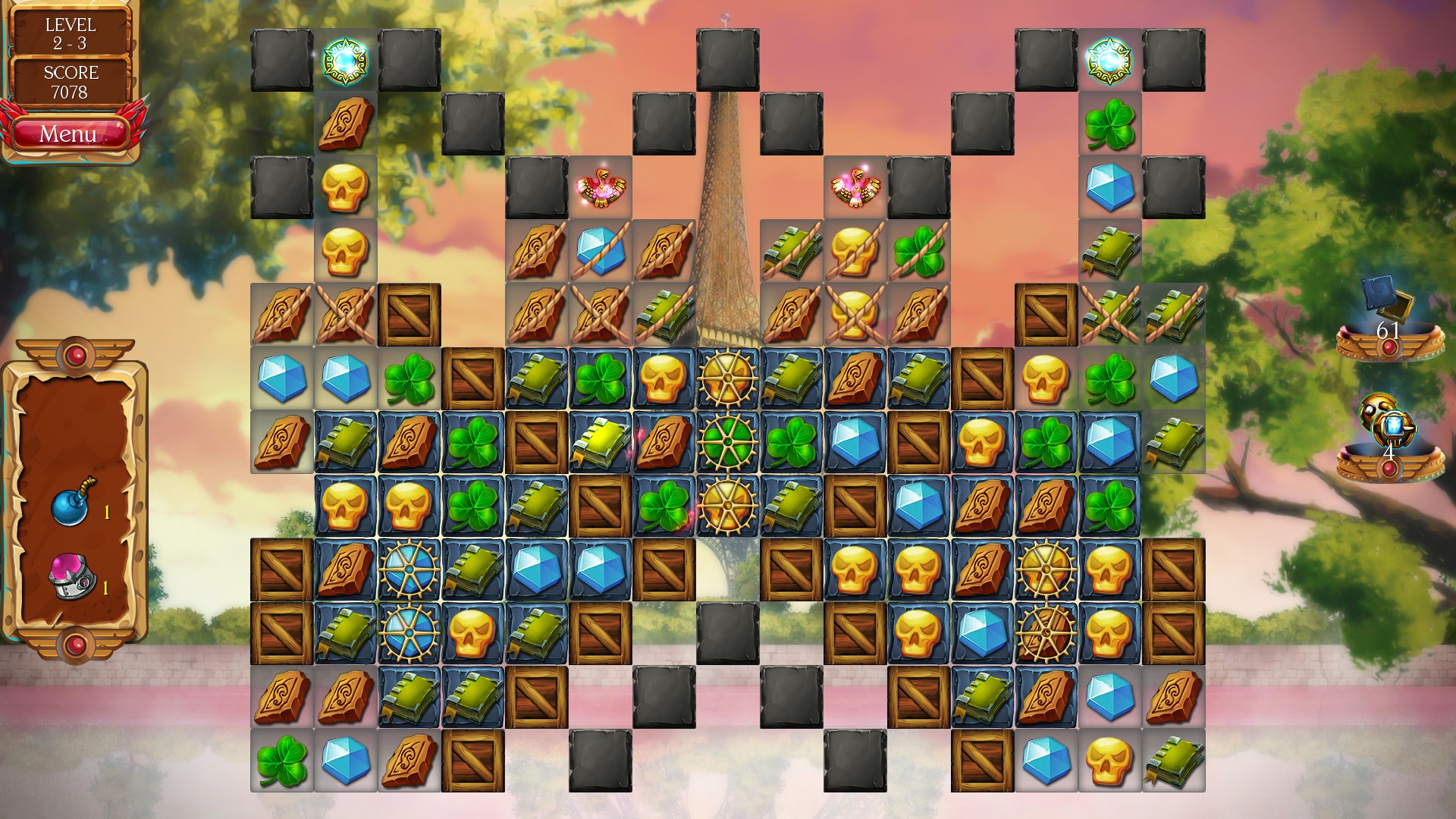 The music and sound effects are fairly straightforward. I do like a couple of the tracks, but since only about five tracks are played throughout the entire game including the menu theme, it can get old quickly. The sounds for clearing and item usage are good enough. The story is shown in 2D art. I found the art style to be cute.

As it is a match-3 game, moral warnings and appropriateness are minimal. One of the things to note are explosions, such as using the bomb-based items in the match-3 sections. In the narrative, no violence is shown, but there is a part where the main cast has to throw a grenade at the villains to make their escape. It’s never noted if the villains survive the blast, let alone are even hit by it. The game only touches upon the very surface-level aspects of the Inca Empire so the more questionable aspects of the culture are never discussed.

Gaslamp Cases 3 is another match-3 game. If you played a match-3 game before, you most likely played something similar to this. You’ll most likely enjoy this one too as there are plenty of levels to get your fill. It’s family-friendly as well so you can play this with the kids if you desire. If you ever wanted your match-3 games to have a mystery aesthetic to them, you can't go wrong with Gaslamp Cases.