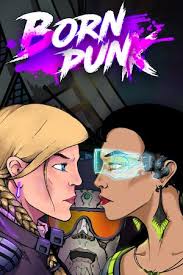 Thank you Insert Disk 22 for providing us with a review code!

Thanks to crowdfunding ventures such as Kickstarter, archaic genres gain a new lease on life. There are still individuals and groups who want to keep the point-and-click adventure genre alive. Successfully funded in 2020, Born Punk was released in June 2022 for Steam and is planned to release sometime later for the Nintendo Switch.

“Born” being from Bornholm, Denmark, and “Punk” being from cyberpunk, manages to be a unique setting due to the former more than the latter. You’ll view this world from the eyes of three characters: Eevi Rinasdottir, a combat hacker who was dismissed from her previous job and now works in her foster father’s bar, Mariposa Sotomayor, the Cuban CEO of Mitsotomo who is a lot kinder than she seems on the surface, and Grandmaster Flashdrive, an android obsessed with 1980s gangsta rap—to the annoyance of everyone around him. Yet in times of extreme emotion, Flash tends to change to a proper, posh, and verbose individual. You’ll experience their introductions to their characters such as Eevi waking up from a hangover, Mariposa getting controlled by a rogue AI, and Flash running low on juice desperately trying to recharge his system in the dirty streets. How these three characters end up crossing paths and working together is very interesting.

Born Punk takes place in the 22nd Century, specifically 2155. A lot has changed in the world, such as the Southern part of the United States breaking up and forming its own nation while the Northern part and Canada become the “United States of Canada”, AI has advanced to the point where androids are commonplace and considered their own citizens, and Russia managed to become an extremely powerful nation by the hostile takeover of various Eastern European nations (oof). A lot of these details are found within the lore, and the lore is well-written adding a lot to the worldbuilding. Much of this lore is accessed through a separate menu and unlocked by observing many points. 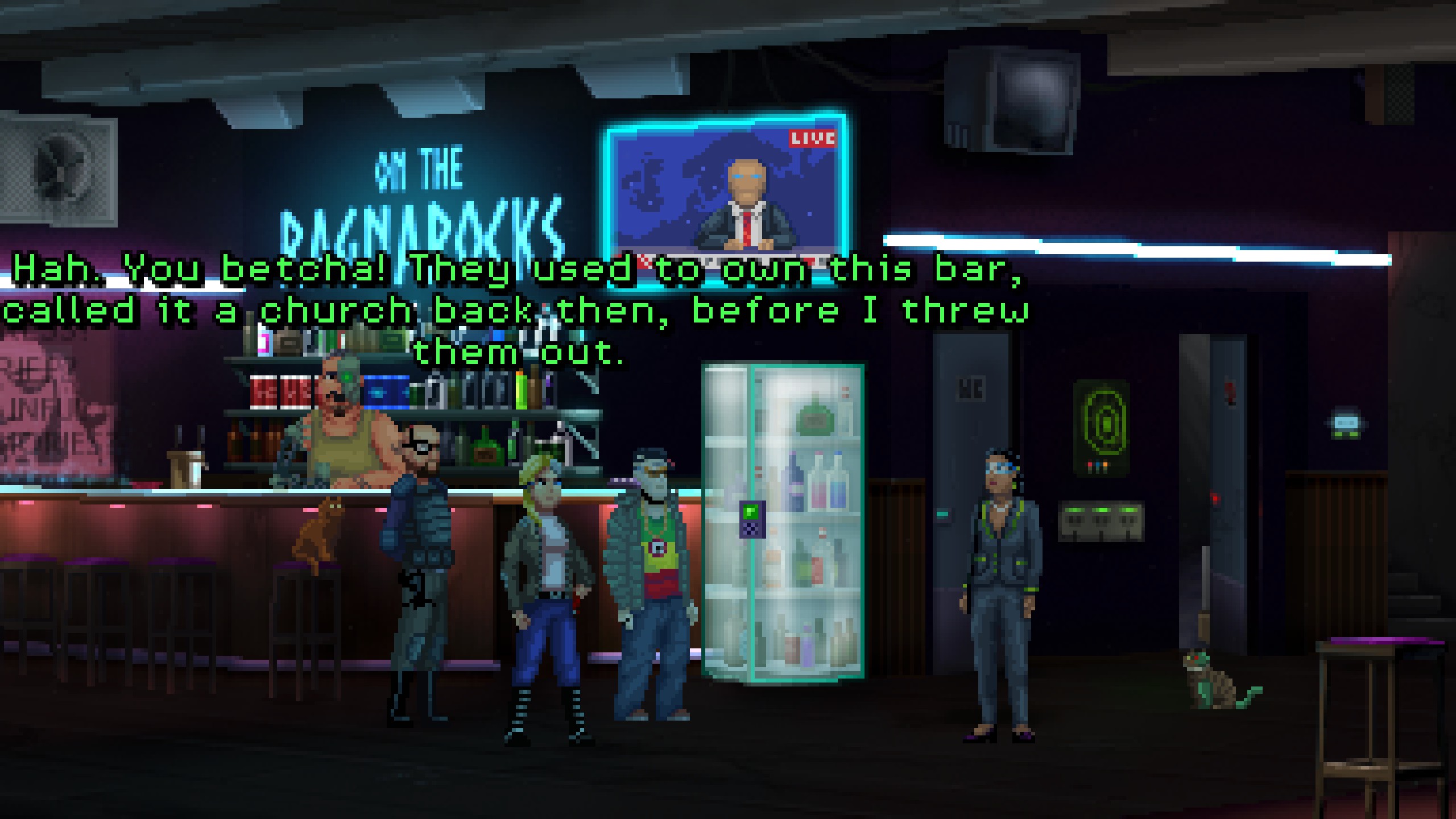 Everything can be controlled by the mouse, as it is a point-and-click adventure. Unlike some in the genre, Born Punk has two methods of clicking. Right-clicking is to examine the point of interest, while left-clicking is to interact with it. Scrolling up or down with the mouse wheel will access the inventory and lore database respectively.

It threw me off for a bit because Born Punk lacks a tutorial and if you don’t look at the controls, options, or settings in the main menu, it throws you right in. Many puzzles have multiple solutions and a lot of them are self-contained, reducing the amount of “moonlogic” puzzles and removing all unwinnable situations. That doesn’t mean there aren’t zero moonlogic puzzles, but fortunately, they are kept to a couple at most. Most puzzles I didn’t find too difficult, but one of them I had to resort to a guide (and so did many others). Unless you’re very musically inclined—which I am not, you’ll end up stuck on it for a long time as it has to do with combining certain turntables of music to create beats, where your only hints to solving it are vague statements about music composition. There's also way too many "red herring" items. These are items that serve zero purpose, and I had nearly a dozen of them when the credits start rolling.

Insert Disk 22 did a great job with the visual presentation. Everything is sprite-based, but the world is beautiful to look at with superb shading. The sprites are very active and there is always something going on in the background; 22nd Century Bornholm feels alive. The movement of sprite backgrounds is also used for many puzzles so if the solution seems impossible, observe the background. 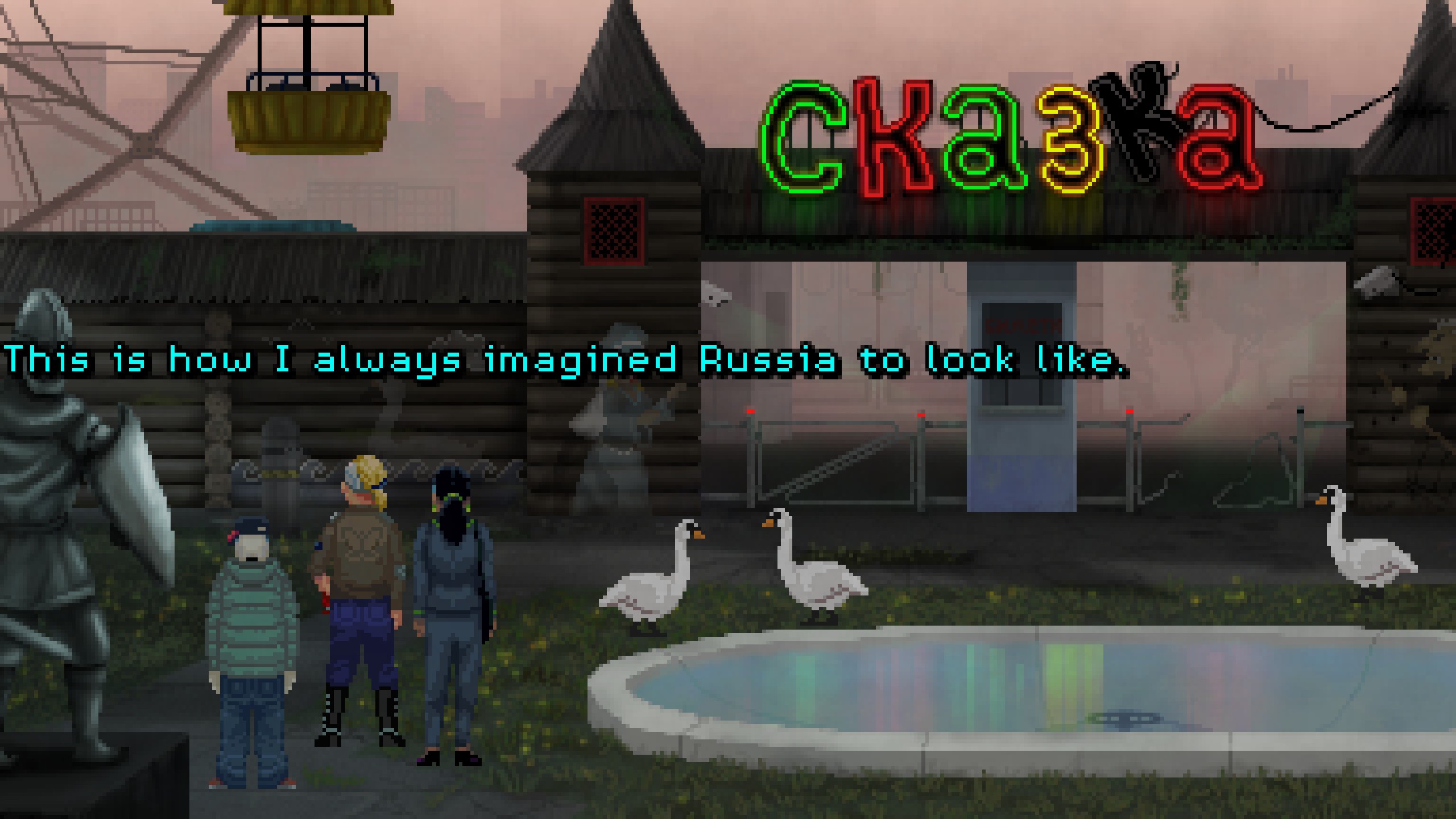 Every character in the game is voiced, which is nice to hear. The voice acting itself is great with a lot of range and expression as many of the same voice actors voice numerous characters, but there are plenty of issues with sound mixing. Sometimes characters are too low compared to the music no matter how much you adjust the settings. Other times there are either uncomfortably long pauses between sentences or sentences immediately start from the previous one sometimes cutting each other off. It happens often enough that it does get annoying. I’m sure COVID restrictions didn’t help in the slightest. The music in Born Punk mostly consists of techno and electronic beats given the setting. There isn’t a lot of it, but it manages to be good.

The narrative of Born Punk mixes thriller and comedy, making for a story that doesn’t take itself too seriously despite the rather sad state of affairs of the main cast and the city they live in. In the beginning, the tension is pretty serious with Eevi and Mariposa's plots, while Flash contributes to more of the comedic moments. As the trio finally groups up halfway through the narrative, the tone makes a pretty drastic change despite the stakes being higher. While in the beginning there were concerns about mind corruption, shootouts, and kidnappings, it switches to a mostly satirical nature poking fun at the 1%, cultists, silly fandoms, and the like. While I did find a lot of moments funny and the interactions between Eevi, Mariposa, and Flash are great, I can understand how the shift could alienate some people. This focus on a sillier tone meant that some plot points were entirely dropped or absent until near the end. The ending also is pretty abrupt, leaving me pretty disappointed.

Violence can get up there as there are choices where you can kill others as the main cast. There are some instances of blood, and one gruesome image of a man crucified on a building. There is an achievement for a pacifist run, so you aren’t forced to kill either humans or androids. Language is standard to any TV-14/PG-13 program with usage of “pissed”, “b*tch”, “b*st*rd” “sh*t”, and some blasphemy with a couple of “G*dd*mns” here and there. There are some sexual jokes made a couple of times, although I can’t remember exactly what was said. However, Eevi is the perpetrator of said jokes and has an attraction toward androids—which she very clearly lets Flash know. Regarding sexual content, there are a few quotes regarding Eevi’s promiscuous nature and preference for android men. I think in one area where you change the channels, there is a brief moment where you can see the bare butt of a man. Norse mythology plays an important role in the setting as many people refer to Norse gods such as Thor, Loki, Freya, and Odin. There is even a religious cult that flies above the skies worshiping these gods. While humans are seen as equals in 2155, the androids are not by others. Some characters clearly let their disdain for androids be known, and androids are discriminated against as some are forced to live in the sewers underground, and others are hunted.

Insert Disk 22 managed to do very well for what is their first game (despite falling into a few pitfalls that lead to the diminishing popularity of the genre), showcasing a love for the genre. While there are issues with the sound mixing, the voice acting is great. The main narrative does drop in quality at points with the ending feeling unsatisfying while also feeling very sequel hook, the lore and characters do get you invested into the world, with Grandmaster Flashdrive being a standout character among the rest. In terms of morals, it is a lot to take in at first glance, but in context, it isn't as bad as it seems. Plenty of these instances are called out, mocked, or made fun of, and thus are not encouraged. Born Punk shows that there is still a bit of life in the genre that was almost lost to time.