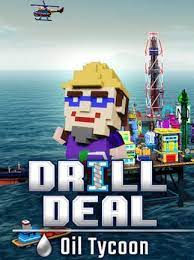 Thank You Manager Games S.A. for providing us with a review code!

In Drill Deal – Oil Tycoon, you’re going to be in charge of an oil rig. Sounds simple enough, but just like real life, managing one takes a lot of time, effort, and resources to make it successful. When it comes to the strategy and simulation genre, it’s probably the one I have the least experience in due to my origins as a console gamer. Despite PCs being the platform of choice these days, I tend to drift away from the genres that have a majority audience on said platform. Every once in a while, I’ll get out of my comfort zone.

Across 8 levels are a variety of objectives. One level may need you to destroy the mines around the oil rig, while another will have you build up an economy. Within the levels are additional objectives that you can complete to earn more stars for each mission. I started with the tutorial and while the tutorial does explain many features, it also neglects to explain other important mechanics, such as how crucial building blocks are and how to reliably generate them. I found myself overwhelmed with all the information given to you at once. I think if the tutorial is ever revisited, it should be spread out across the first two or three stages.

Drill Deal’s graphics are of the voxel variety. It’s the same type of graphics that Minecraft uses. With its bright colors and use of shading, it ends up looking most similar to another voxel game, Cube World. At first, I thought the choice of voxels was weird, but they ended up working in their favor as the short stature of the people moving around reminded me of my younger days playing with Legos and Mega Bloks. 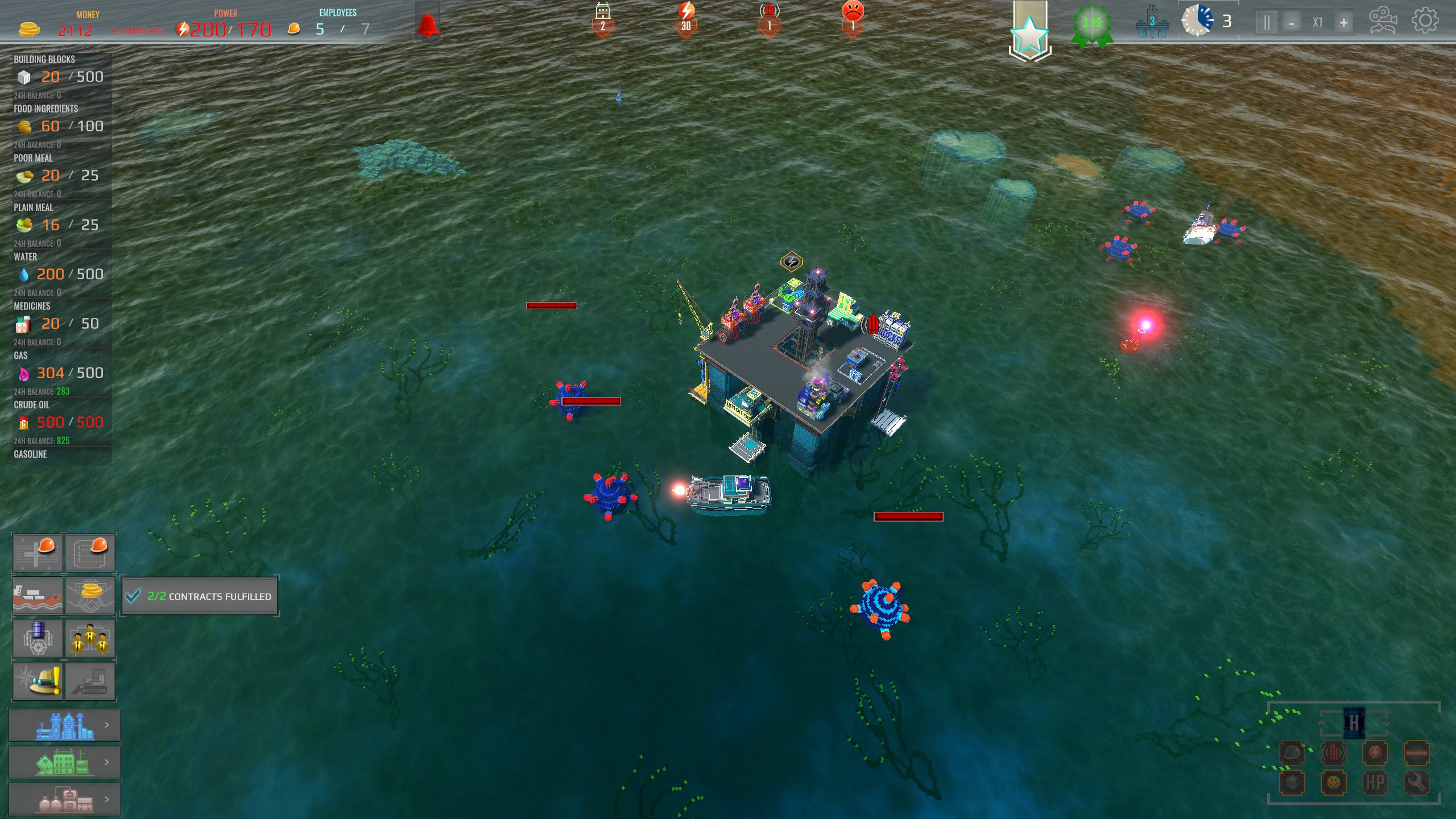 There are plenty of things to be mindful of such as employees, employee satisfaction, numerous buildings to generate resources, and storage to store food and oil. Keeping employee satisfaction is key as they are the backbone of your rig. If you neglect their needs, they will perform below expectations such as sleeping on the job, quitting, or dying in the worst case. This is where building facilities such as cinemas and kitchens are used to keep them entertained and full of food.

The key to success is finding methods to continuously build. The more you build, the more you level up which grants access to more contracts to make money, and more space to build. You’ll also be ordering expeditions to collect raw materials away from the rig, and making contracts with companies to pay off your employees. If you ever need to slow things down, you can decrease the game speed to 0.5x the original. 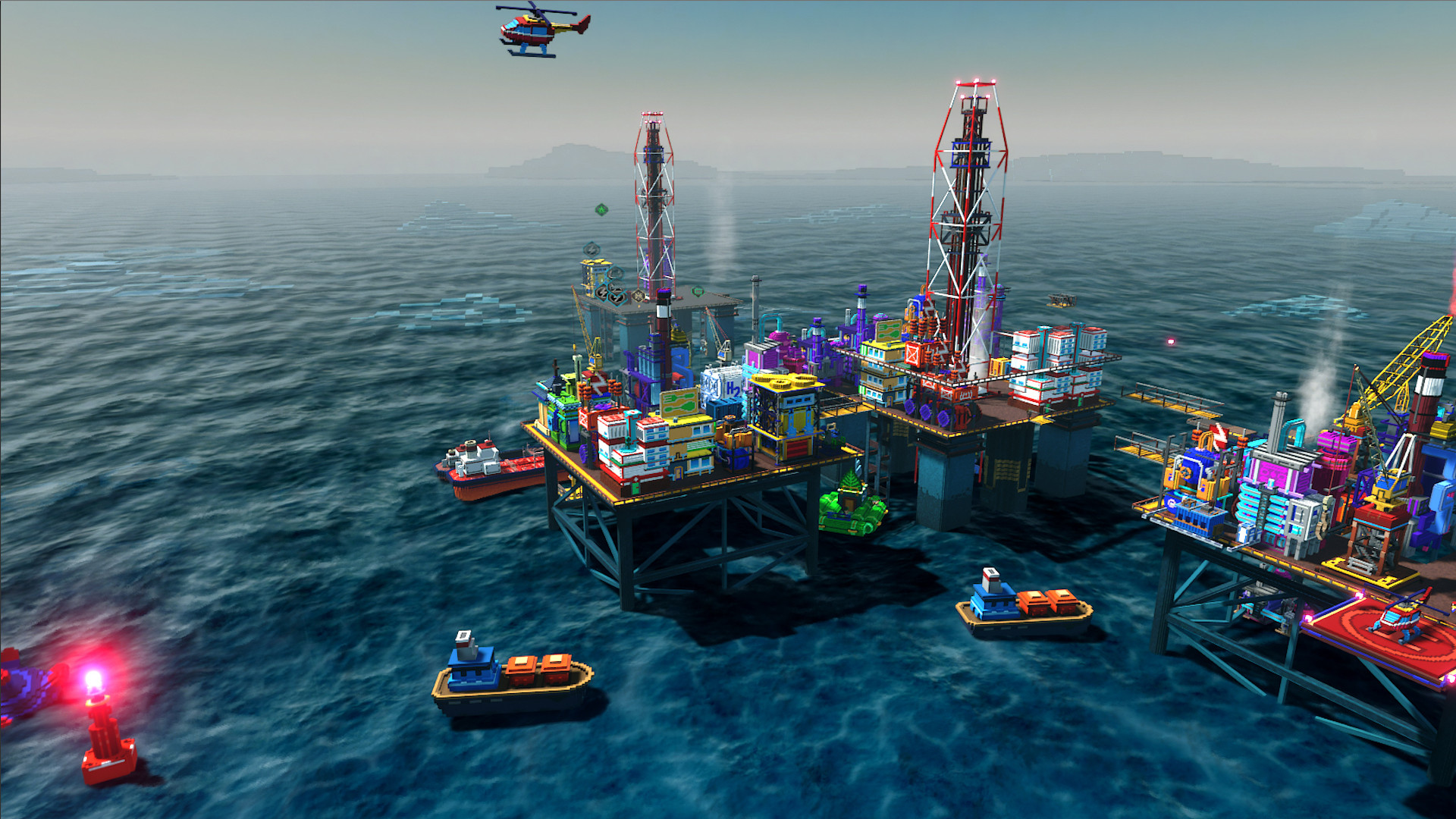 Every once in a while, pirates will attack your oil rig and you’ll have to build a specific building to combat them. Combat isn’t as exciting as it sounds because of the erratic nature of how pirate ships move alongside your cannon shots having travel time. You’re supposed to lead your shots to hit the ships, but since pirates can make a 180 at a moment's notice and they don’t seem to have patterns, these moments are more down to luck than skill. Pirates also seem to attack frequently so after a while, I started to dread fighting pirates.

One issue that started to become more apparent as the game went on is the user interface. There are so many menus and you have to manually scroll through most of them just to get to the one or two buildings you want. It started to harm the experience after a while because of the sheer amount of menu navigation and lack of hotkeys. Being able to assign hotkeys and refinement the menus would go a long way.

Drill Deal – Oil Tycoon contains around 10 to 20 hours of campaign missions. When you’re done with that, you have a sandbox mode to mess around with. For what amounts to a “casual” strategy/simulation game, it has its problems but manages to be competent in its strengths. The only moral concern I experienced is the violence against pirate ships and sea creatures such as krakens so a general audience should be able to play this one with little to no issues. Although it will be quite a while before I tackle another strategy-simulation game, I can recommend Drill Deal to anyone looking to lose themselves in oil management.