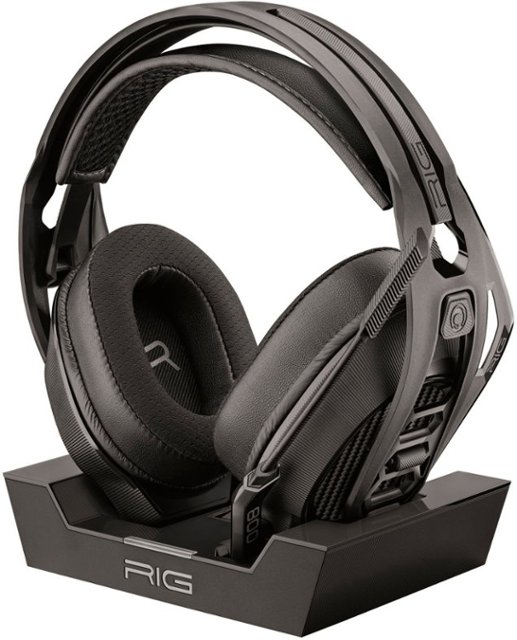 Thank you Nacon for sending us this headset to review!

In 2020, Nacon purchased the headset division of Plantronics, along with the RIG brand name. The RIG 800 was highly regarded during its original release under Plantronics, and Nacon took particular care to keep what made the original great when they released this updated version. To sweeten the deal, it now includes a new charging base station - which I enjoy far more than I expected to, and it's for the same price as the original!

I've reviewed quite a few different headsets over the years, and I was surprised how different this one is. Well, to be fair, it does look quite 'gamery' - that is to say, it doesn't look like a classic headphone, but instead the design is rather aggressive with sharp angles and textures everywhere. Though thankfully it lacks RGB - I don't see the point of wasting energy on making one's headset glow, especially since the wearer can't see it. But once I picked it up, I realized why they made it all plastic: this thing is light. Really light.

Or at least it feels like it. I put it on a scale, and it weighted 310 grams (though the product sheet shows it should be 290g) - which is quite a bit less than most of my headsets, which range from 350g some reaching close to 400g. And yet, I found one which was lighter and yet felt heavier on my head. So it's more than just weight, but how it distributes it across your head.

You see, this headset has one of the softest, and most plush set of earpads I've worn. I've worn other soft ones, but they either have more clamping force (this one is quite gentle), uses a hotter protein leather, or uses a harder memory foam for a tighter seal. I'm not certain what kind of foam is in these things, but I am beyond thrilled that replacements are on sale on Amazon for a very fair price. I may end up getting some for other headphones...

Strong Points: Incredibly comfortable; extremely lightweight; very adjustable; clear and detailed sound profile; modular build, with easy to swap parts on sale for low prices on Amazon; fantastic ear pads and head strap; docking base station is awesome; good wireless range and stability
Weak Points: Still uses micro-USB ports, though the docking charge base largely alleviates the hassle; extra-large heads like mine may have some trouble with fit; plastic build feels cheap at first, with very soft plastic that can be marred with just your nails; some may prefer a bit more lower mids/upper bass

The other thing that helps make them really comfortable is the cushioned self-adjusting headstrap. This design is not exactly rare, but it's far from common - each design has its own set of tradeoffs. But what it can do well, if designed properly, is distribute the weight across much of the top of your head evenly, making it feel lighter overall. And this set certainly succeeds in doing that. Though I must say that it just barely fits my extra-large head - even with the many adjustments available, it's clearly designed for the more normal noggin'd among us. It's worth noting that the headband can be removed - and replacements for this are also on Amazon. I love how modular this design is. Speaking of which, it's not just the earpads and headband that can be removed and replaced, but the frame also!

On the side of each earcup, there is a strange cylindrical attachment to the headband frame. At first it appears decorative, and it looks really cool and 'gamery' - but it's actually functional. You can push in on this, and the earcup detaches from the frame, and you can choose one of three positions on each earcup. This fits the best with it on largest for both sides, though barely. If my head was any larger, I wouldn't be able to fit in it comfortably. Another thing to note is that the headband frame can be removed in this way, though it's not quite as easy as the other parts to replace. You need to pull up rubber straps and pull out the cable connecting the two earcups, and reinstall it in the new replacement frame. While I don't think it'll break all that easily, the fact that you can replace it in this way makes these cheaply repairable - and that goes a long way in helping you keep them in tip-top shape, long after the one year warranty expires.

Outside of the incredible comfort, it's worth noting that they sound great, too. They are remarkably balanced from a frequency response perspective, and their sound profile tends towards detail without sacrificing bass or anything like that. I will say that some may prefer a bit more low end punch, particularly in the lower midrange, but I don't really miss it too much. I just noticed that when comparing it to other headsets like the Turtle Beach Stealth 700 Gen 2. Honestly if I hadn't compared them side-by-side, I probably wouldn't have noticed. I enjoy how they sound a whole lot. I will say that the low-frequency resonators that they advertise about on the box are barely noticeable - and that's a good thing. They add a small amount of low bass rumble without totally ruining how much detail comes through. On rare occasion they can be distracting, but I have listed to them quite a lot over the last two weeks, and have only noticed this maybe a handful of times; no headphone is without flaws, but these really nail the sound signature if you prefer a neutral to slightly detailed sound, which I do.

The microphone works fine. It sounds decent, though a little bit bright - that is to say, they tend to err on the side of clarity rather than a radio announcer type of sound (several popular studio/podcast mics tend to emphasize the lower vocal register) when talking through them. Noise levels are good, though not exceptional. I will say that out of the box, the way the gain levels are set does make it possible to overdrive the microphone a small amount if you yell into it with it close to your mouth. The flip-down motion to unmute works well, and you can easily flip it back up to mute it - though I found that if you adjust the microphone to be close to your mouth, you may want to bend it away from you before flipping it back up, or it might bonk you in the forehead. (At least it does for me.) 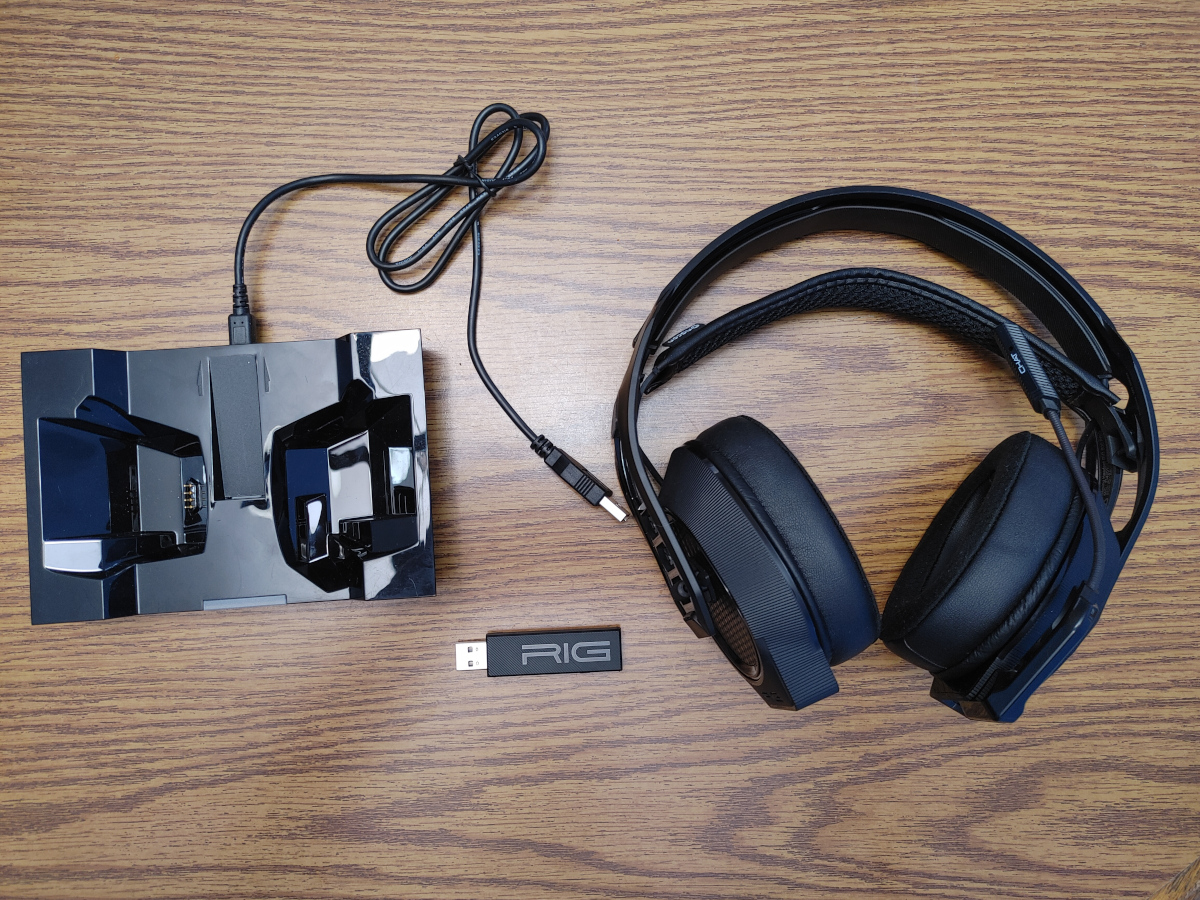 When I first got the headphones, I was concerned about the build quality, especially that super soft and lightweight plastic that it uses. And those concerns were founded - I used my nail to feel some of the more interesting plastic textures that cover the side by the earcups, and I actually managed to scratch it! A harder material wouldn't have done that. And yet, since it's so light and easily replaceable, I can forgive that. Once I considered that the soft and flexible plastic does make it far less brittle, and contributes to its light weight, I found the chosen compromises easier to accept.

And last but most certainly not least, is the so much fun to use charging base station. I honestly never thought I'd care this much about such a simple feature, but this means thinking about battery level on this headset is simply a thing of the past. I had every intention of testing battery life on this thing, but I kept putting it back onto the dock when I was done. Then, the dock would power off the USB dongle as well, so I wouldn't have the headset taking sound from whatever it's being plugged into; while on your head, the headset serves you audio, but while on the dock, the USB audio device disappears, so whatever other default audio device might be around can easily take over. I found it oddly satisfying to keep docking it when I was done - it goes on easily, and I never had a case where the charging pins missed their target. Very well done.

And it's a good thing too, because otherwise I'd have to keep a micro-USB cable around to charge this thing. I know the product was just updated and not rebuilt from the ground up, but I hope they'll consider updating the charging interface with USB-C next time. It may very well be the only thing connected to your PlayStation 5 with that old interface still.

I guess another nitpick worth noting is that the volume wheel can sometimes act a bit strangely. It works, but sometimes it'll go past what I meant for it to do, or it'll not go quite far enough. It's an odd volume wheel, but it's better than nothing. The chat feedback wheel (also called sidetone) uses the same strange-feeling plastic on it, but this one has a notch, so it can't go below or past its physical range, so that's much less of an issue.

One final nitpick is that if it's been on the dock for more than a minute or two, picking it up isn't enough to power it back on; you need to press the power button on the side of the headset as well. It's not a huge deal, but considering how smoothly it goes to sleep when docking it, it would be nice if it would wake up just as easily.

Nacon's RIG 800 PRO HS is a fantastic headset for PC and PlayStation gamers. The HX version is meant for Xbox gamers, and has the same price, though it's not as flexible when it comes to what platforms it works on. If you're a PC gamer, there is coming an HD version that is remarkably similar to this HS one; it should include a license to Dolby Atmos for Windows (which I already own!) but is otherwise quite similar. I have been really happy with the comfort and performance of the RIG 800 PRO HS, and while I certainly can't say I've tried every headset in the price bracket, I can say that unless your head is larger than mine, you really should give this headset a close look. It sounds great, the wireless signal works well, and that dock is so Incredibly convenient. Highly recommended!