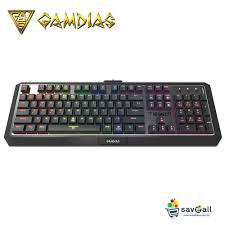 Gamdias has been sending us keyboards to review for several years now, and we are truly grateful for their kindness. Cheryl tends to review most of their keyboards, but she has a strong preference for Blue (or loud and clicky) keys, whereas I tend to prefer Brown or Red, because of their softer touch and quieter feedback. So, when this Hermes P3 RGB Mechanical Gaming keyboard was made available for review with Brown keys, I jumped at the opportunity.

I've been typing heavily for over twenty-five years now since I got my first computer that my parents allowed me to call my own sometime in the early 1990s. Over that time, as my arms and hands gained mileage, I have found that a mechanical keyboard is simply a must – rubber domes require bottoming out for activation, and that really starts to hurt these hands after a while. My knuckles and finger joints get sore, and anything I can do to prevent this is critical as both my day job, as well as my evening pursuits, require quite a bit of typing (as evidenced by the existence of this review).

There are several aspects to what makes a good feeling keyboard. The switches are extremely important of course, and these are using Kailh low-profile Brown switches, which are, to the best of my knowledge, a Kailh invention, rather than a Cherry clone like their previous switches have been. (Based on my Googling, they look a lot like PG1350 switches or the 'Choc' ones, but I have no way to know for sure.)

These, like their larger Cherry colored inspirations, are tactile keys without an audible 'click'. The Blues have a loud pronounced click, while the Browns do not; they have some physical feedback, but not quite as much as the Blues. They also generally require slightly less force to activate than the Blues as well, though their spec sheets list them both as needing 50g of force to operate. Cherry Browns (and Reds) list a 45g activation force, which surprisingly enough, is noticeably lighter to the touch. It's still not bad though.

Strong Points: Low-profile keys are quick responding and the short travel is great for both ergonomics and games; metal plate makes it feel very sturdy; despite being a mechanical keyboard, the impact is very soft and feels great to these old hands; software works well, and stays out of the way via onboard memory storing the configuration
Weak Points: I prefer the ABS keycaps on Cherry or Das keyboards; no wrist rest

Another important aspect to keyboard feel is build quality, which leads especially to how it's mounted. If the shell feels wobbly and cheap, that can translate into keyboard feel in a very important way. Thankfully, this one feels really solid, thanks to the metal top and well put together plastic body. It's a fairly light and compact design, which feels much sturdier than it has any right to considering how light it is. They did a great job here.

Another big contributor to keyboard feel is keycaps. The ones here are unique to this kind of switch, as there is no aftermarket for the Kailh low-profile switches just yet. These are definitely on the better side; I like them much more than some of Gamdias' older keycaps. But, I still prefer the more premium feel that Gamdias uses on the P2, or especially the ones on my Cherry or Das keyboards. I am not sure if it's the material (ABS) or the paint/coating, or what it is, but those just feel more premium. It's not a huge difference, but it's there. For the record, the Gamdias P2's keycaps are the closest I have seen from them to that same premium feel.

But it may not be the keycaps themselves, but the way that they mount makes them feel different, also. The classic Cherry connectors (which translates to most of their clones also) is a simple '+' under each keycap that is pushed down and secured. These new Kailh switches use a two hook system that works well enough, though doesn't feel quite the same. But still, it's quite decent.

And finally, the way the keys feel lacks the 'bounciness' of the other key styles. When typing, they feel like they bounce back into place quickly – but not as quickly as more full-sized keyboards. I don't know if it's the switches or simply the necessary compromises needed to fit the form factor; they feel nice, but don't 'bounce' the same way as the other keyboards do.

With all of that said, please don't interpret it as dislike; indeed the exact opposite. This keyboard is really very nice to type on; it feels sturdy despite being light, and gives good feedback when typing. The low profile is really great; it's much more ergonomic and easy to make work in nearly any environment. There is a lot to like with this keyboard.

The RGB LEDs are excellent and light quite well throughout the keycaps. The colors, which are configurable through Gamdias' HERA software, pass my wife's purple test – which is to say, it's one of the few keyboards that actually can display purple properly when asked; almost all do red, blue, or green correctly, but for some reason, many display purple as a shade of pink. Not here; purple is indeed purple. 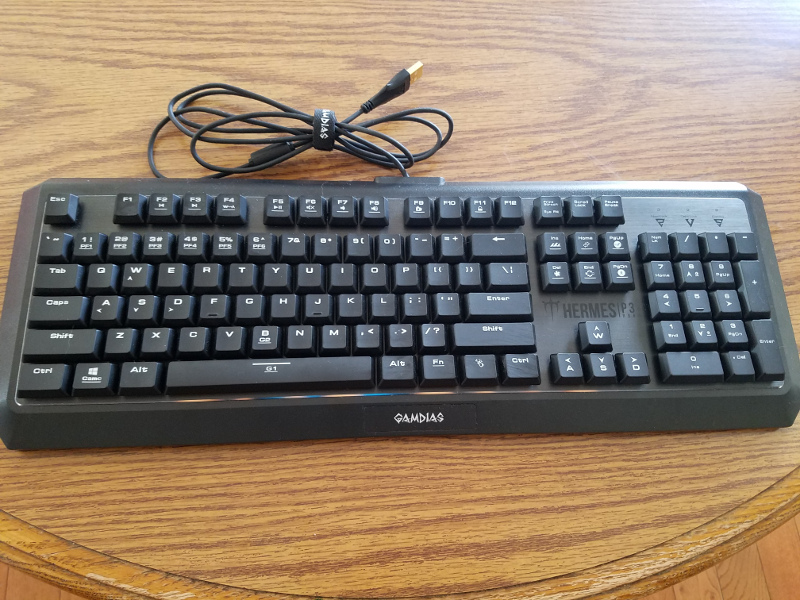 And HERA works really well here. There is onboard memory that can be used to store macros, default keybind changes, and more. And the best part is, once configured, it works no matter what operating system you use. I prefer the Windows key to be by my left hand, as common Windows shortcuts, like Win+x, are available from there, whereas the way the keyboard ships has it on the right. So, I went into HERA, set my preferred color, and activated the Fn <-> Win key swap feature, and then saved my changes. I then disconnected my keyboard, and connected it to my work laptop, which happens to be a Mac. It works perfectly – including the Windows key swap, color, all of it. This is especially important since my other keyboards use the same layout and I did not look forward to having to learn another one.

You can record macros, both with HERA, and on the keyboard itself. There are two macro keys, where you press Fn + space or 'b', which can activate the macro as requested. There are also up to six profiles you can use, which can be used to change color schemes, macros, and more. You can also choose to have your keyboard swap the WASD and arrow keys, have the lighting make color waves, swirl in circles, swish back and forth, or simply be turned on or off if that's your thing. The location of the keypress to swap WASD and the arrow keys is most definitely a headscratcher, but that seems to be true of all Gamdias keyboards. There are also media keys accessible via the Fn key, which is always welcome, as I use them daily.

The keyboard looks nice, though it has a plastic border around the metal keyboard plate that takes up space that I would prefer not be there. This also makes using a wrist rest more difficult, which is its biggest flaw to me – I really like a good wrist rest, and this keyboard does not include one, and the plastic border makes it more difficult to use a third party one. It's not impossible; I use a beanbag one okay, though I prefer more solid ones these days. Either way, if you don't use them, then I think you will really like this keyboard; if you do, then know that the ledge does kind of get in the way, though thankfully it's less than an inch long, so you can work around it.

The Gamdias Hermes P3 RGB Mechanical Gaming Keyboard really shows how far Gamdias has come in the last few years. I felt that their older designs were less sturdy than some others I have used, and their keycaps, and the paint they used, were not to my tastes. But this one fixes almost all of those problems, as does our recently reviewed Hermes P2. And with this model, they are on the cutting edge of keyboard technology, as this is one of the only Kailh low-profile Brown switch keyboards on the market. It looks nice, feels nice, and works great. My biggest complaint is the price; at $159.99, there is a ton of competition in that price range, and I'm not sure if this is premium enough for that price bracket. Oh, and a volume knob like the P2 sure would have been nice!