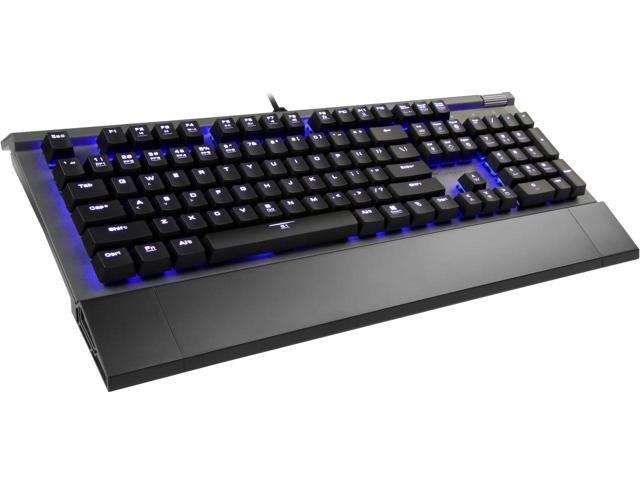 I have been happily using the Gamdias Hermes P1 Gaming Keyboard since we reviewed it in April 2017. I’m a fan of the “clicky” blue switches and thankfully my family members don’t mind the noisiness of it. In fact, there are several blue switch keyboards in our house. (We have technologically spoiled children). Several reviews have been typed up on the Hermes P1 and it’s still functioning great and I have no complaints.

Many of the same features of the P1 are available on the P2 including the custom RGB coloring, braided and gold plated USB cable, N key roll over, WASD/arrow key swap and more. A couple of the features that I miss on the P2 are the removable wrist rest and the metal plated top. The wrist rest is built into the design so if you’re not a fan of wrist rests, you may want to consider another model. While the P2 feels study, I still favor metal over plastic when available. Both the P1and P2 models come with key pullers and I miss the built-in holder on the bottom that the P1 offered.

Some new features that the P2 brings to the table are swappable, optical switches. The blue optical switches don’t bottom out like the standard mechanical switches. They have a nice sturdy feel to them and they react to gentle key presses nicely. The P1’s keys seem a little softer to press. The P2 will probably get softer over time and many key presses. I like the feel of both of them so I can’t really declare a winner here. I plan on using both daily, one at work and the other at home.

One of my favorite new additions to the P2 is the volume knob. It’s so much easier to use than the media keys. While the media keys are still available, they only do incremental volume adjustment now. Muting still works the same way and I like how the volume knob is clickable and mutes the sound when depressed. Just in case you’re wondering, the WASD/arrow key function swap is still in-between the media key functions for some odd reason. Gamdias has been doing it this way for a while though.

Though the Hermes P2 RGB Gaming Keyboard boasts of 16.8 million colors and four levels of brightness, I had a difficult time getting color variations from the initial seven in the Hera software. For the life of me, I could not get the keys to be purple. My MSI laptop with a SteelSeries keyboard has the same problem and both keyboards are more pinkish as a result. Unlike the Hermes 7 color (https://www.christcenteredgamer.com/index.php/reviews/hardware/6237-gamdias-hermes-7-color-mechanical-keyboard) mechanical keyboard we also reviewed, you can set the colors on this keyboard by individual keys and zones instead of settling for the default rainbow color scheme.

If you like effects, you can choose between several including breathing, wave, marquee, ripple, and others. The default mode is neon where the keyboard rotates between several different colors. There are less effects available on the P2 compared to the P1. Like the P1, you can customize the color of each individual key or by region to make your keyboard truly unique.

With the Hera software you can also configure macros and key assignments. The software is standalone so you don’t have to worry about it slowing down your system’s performance and you can just launch it when you want to make tweaks to your hardware. The settings remain in place when you bring the keyboard to another system. One downside to the software is that it’s only available for Windows.

Unfortunately, the keyboard arrived with a defective switch. This caused extra characters to be typed when first logging into Windows. After the first login, the issue went away. Since the switches are swappable I was able to move the bad switch to the scroll lock key and the password issue went away. Thankfully, Gamdias was kind enough to send us three replacement switches and the keyboard is fully functional. Without their assistance, I would have been in a bind since I cannot seem to find replacement switches for sale anywhere. Which begs the question of why make them swappable if they cannot be replaced?

On Amazon, the P2 lists for $149.99 which is a bit steep in my opinion. While swapping out the switches is neat, I honestly don’t foresee myself doing that anytime soon. Hopefully I won't have a need for the extra two switches Gamdias sent us. The P1 is currently on sale for $54.47 which is an excellent price for a mechanical gaming keyboard. I do like the addition of the volume knob and hope that it stays in upcoming keyboard revisions. I also hope that the wrist rests are detachable in the near future as well.

If you are looking for other gaming keyboards available in the market, check out WePC's reviews