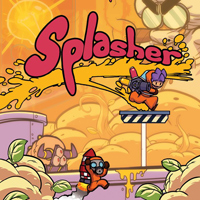 Thank you Splashteam for sending us this game to review!

When I first saw this game I assumed that it was a Splatoon knockoff. I’m happy to report that I was really wrong and in a good way. Splasher is a 2D platformer that is challenging and encourages speedrunning. You can play this game in standard or time attack mode.

The premise is unique, where your character works at a shady company called Inkorp. The nameless hero uncovers inhumane experimentation on his fellow co-workers and determines to free them and put an end to Inkorp’s heinous acts. In total, there are one hundred and fifty four employees to save and one evil boss, Le Docteur, to stop. 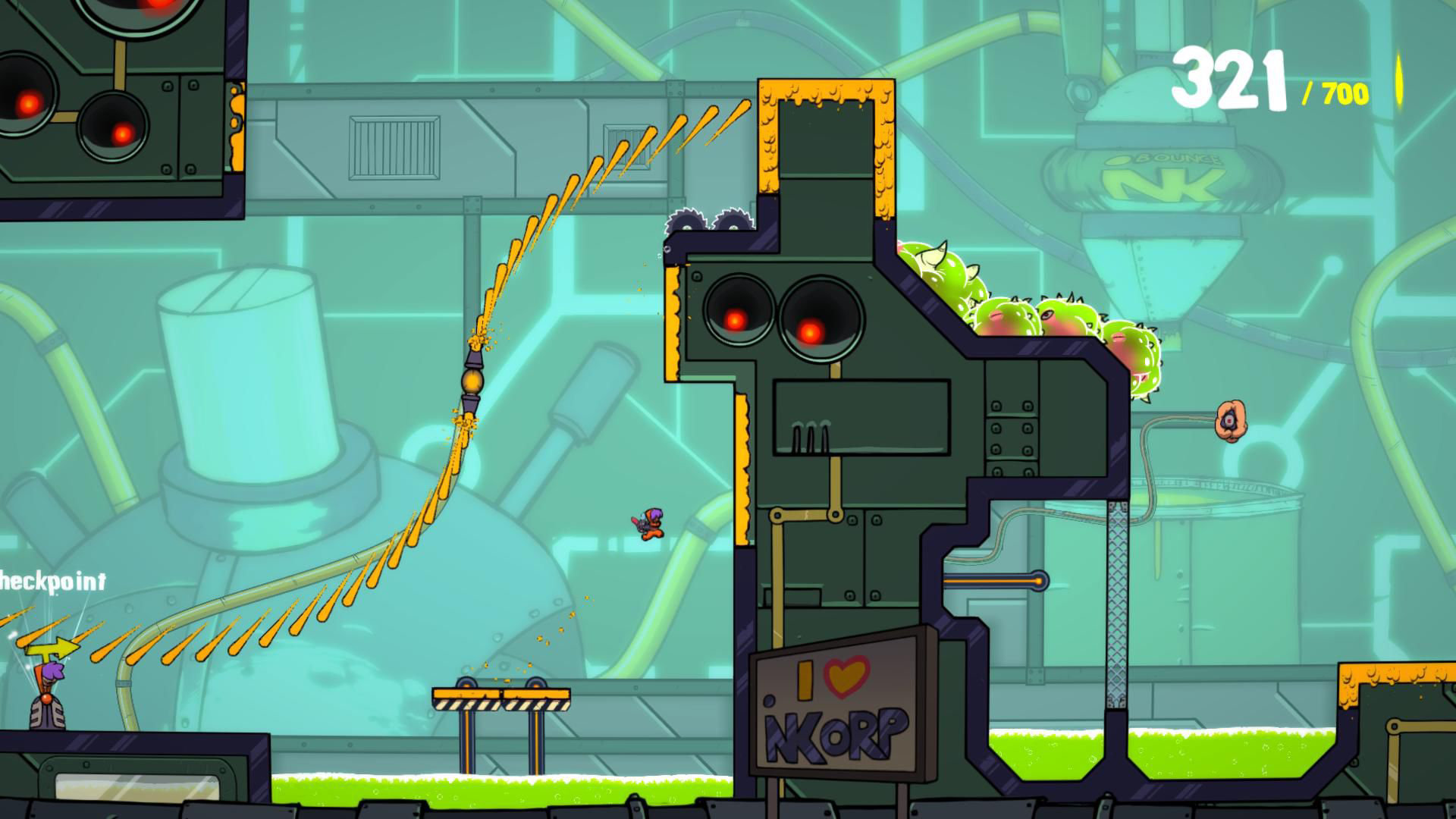 Strong Points: Fun and challenging platformer game
Weak Points: Many of the levels will have to be replayed to collect items missed the first time around, which may annoy people with OCD
Moral Warnings: There are many circular saw blades and characters bleed when encountering them; your character gets flipped off by his nemesis

Like many platformer games there will be a lot of jumping and avoiding deadly enemies and slime. There are various moving platforms and many deadly circular saws and laser beams to avoid. Not only do you have to save yourself, but there are seven other coworkers per level that need to be rescued as well. Each coworker is holding a letter in order that spells out SPLASHER!. There are some forks in the road and this game encourages searching every nook and cranny as coworkers are easy to miss on accident.

All of the levels have some paint messes, but many of them can work in your favor. The pink paint is sticky and allows you to climb up walls. It does slow down your movement significantly due to its stickiness though. The yellow paint is very bouncy and helps you reach new heights that you wouldn’t be able to access otherwise. Pale yellow gunk can be cleaned up with your water gun and doing so helps you earn liquid required for freeing the last employee on each level. Seven hundred drops are required to free the caged employee. Points are earned by defeating enemies, rescuing other employees, and by spraying down certain gears with your water gun.

A perfect run involves collecting seven hundred or more droplets and rescuing all trapped employees per level. Some of your co-workers are stuck in paint while others are inside of wormholes you’ll have to go into and survive an onslaught of randomly appearing enemies. Once the enemies are dealt with, the employee is freed and an exit from the wormhole will appear. Skipping employees is possible, but future levels are unlocked by the total number of co-workers rescued. Some levels took me multiple runs to save everyone. 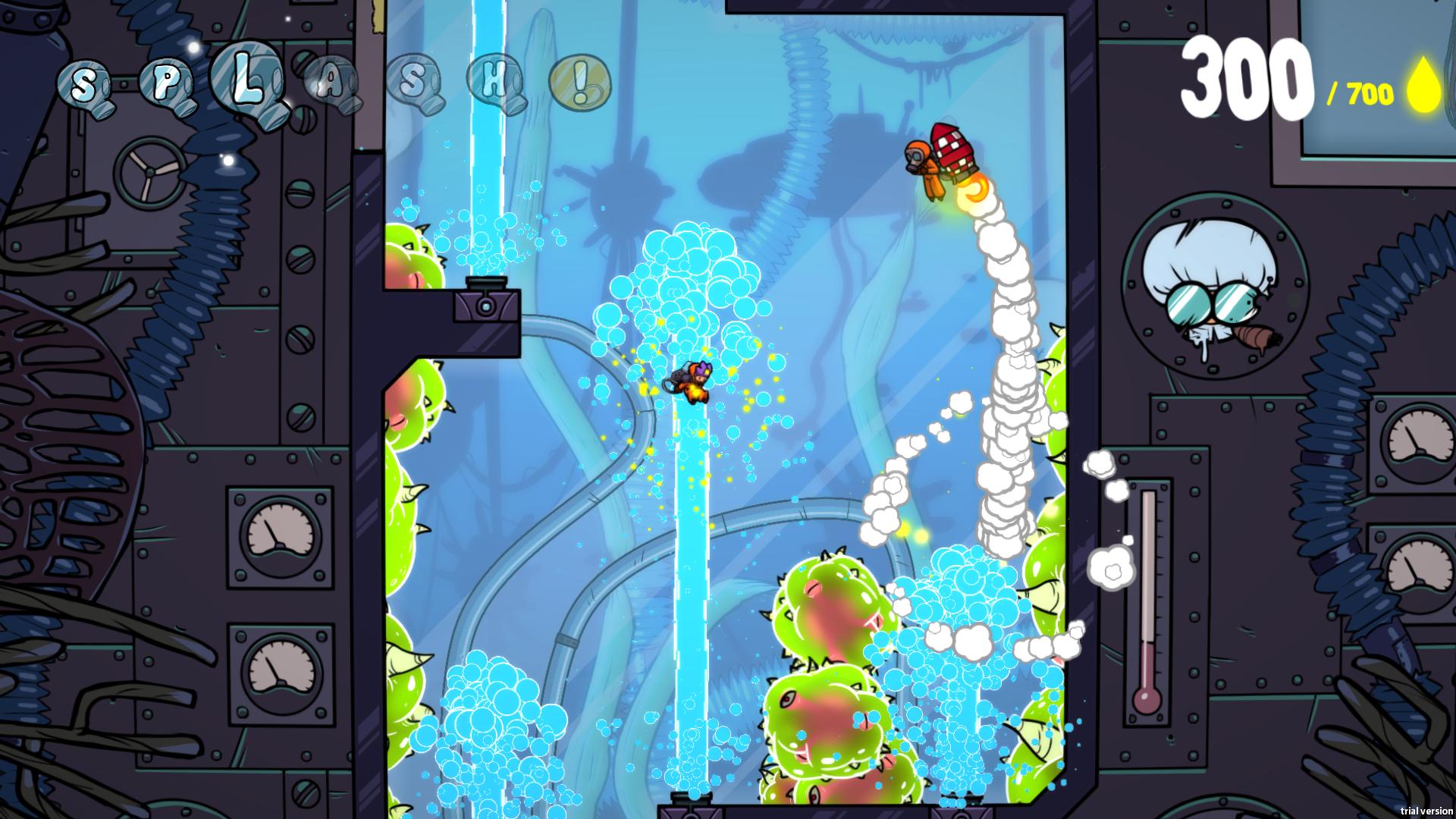 Many of the rescues are quite challenging and I earned Xbox achievements for trying multiple times and another for accidentally letting a coworker fall to a bloody death by a spinning circular saw. Besides the blood, there are some rude gestures as your nemesis gives your character "the bird." Gibberish is mostly used outside in the dialogue boxes. The funky looking receptionist will kindly tell you the percentage of the game completed if you talk to it. The electronic dance background music wasn’t that memorable to me, but the soundtrack is available on Steam for $3.99 if you like it.

The visuals in this game are very colorful and I like the art style. The paint/water spraying physics are well done and challenging to master at times. The level design is solid and the multiple checkpoints are very much appreciated.

If you don’t mind some violence and challenge, Splasher is a fun speedrunning platformer worth picking up. The $14.99 price tag is very reasonable. While this game is available on all popular gaming platformers, the PC version is the only one with a downloadable demo to try.