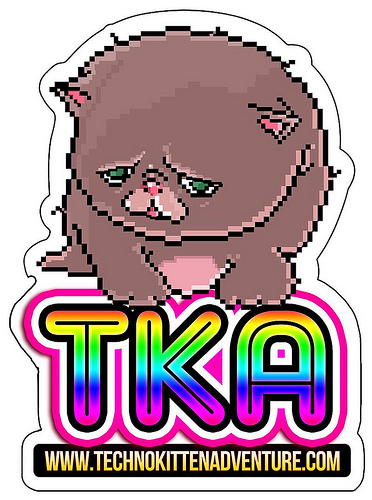 I wasn't sure what to think when a friend recommended Techno Kitten Adventure! I mean yes, it sounded like something I would play, and I was willing to at least grab the demo, but most of the games I play have titles that attempt to inspire or mystify me. For example, Call of Duty, Torchlight, even Super Mario Galaxy. Then there's Techno Kitten Adventure! which doesn't exactly cause me to aspire to greater heights in life. Yet as I said earlier, I grabbed the demo. After playing TKA for awhile, I was pleased enough by what I found to put down the full purchase price.

The concept is simple: You control a “kitteh” fueled by hopes and dreams through the brightly colored (and surprisingly hazardous) worlds of dance music. Not the great American novel (probably), but here simplicity walks hand-in-hand with beauty. Any attempt to add a deep story would've come off as cheap, I feel. There are five levels, each backed by a different song for you to choose from with no unlocking required: just pick the one you like best and get to flying. Though there's incentive in the form of kitteh unlocks at 40,000, 60,000, and 80,000 points, this game is rather old-school in its approach to entertainment. It's meant to be played for the fun of it, and doesn't hold a carrot in front of your face. No complaints from me, though I would have enjoyed some achievements or even a hidden level instead of just “moar kittehs”.

Still, the game is clever in its execution: When guiding your kitteh through the worlds, you'll need to keep him/her/it from touching the walls or other objects in your way. Using the A button (for the Xbox version) to keep your kitteh aloft, your only real enemies are gravity and the wicked crazy effects used within the levels. The longer you go without dying, the higher your score; there's no penalty for death except a return to zero, and a pitiful “meow” let free by the cat. The tricky thing is, the higher your score and the longer you go without dying, the narrower the corridor becomes, leaving you much less room for error. And since that wasn't enough, the developers at 21st Street decided to make it even harder by using those “wicked crazy effects” I mentioned earlier. Rainbow patterns, wave effects, flashing lights, bouncing and dancing lasers, and the dreaded screen flip will all try to keep your kitteh from succeeding at whatever exactly his goal is. To be honest, the whole thing feels like I believe an acid trip would. Techno music, flashing lights, silhouetted shapes doing the pelvic thrust; it was an odd five minutes. It was immensely fun once my eyes uncrossed. 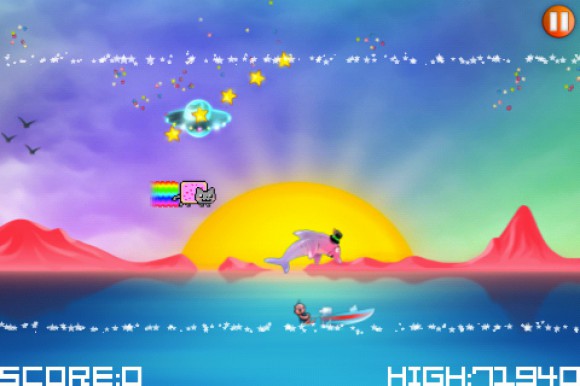 Really, though it's supposed to be about guiding a kitteh, the game itself is all about the music and the environment. There's something to be said for a game that makes you want to dance even at its most frustrating. Those brightly colored worlds I mentioned? Not only are the colors bright, but the artwork is beautiful and evocative of hand-drawn graphics. Sparkling and beautiful in their childlike simplicity, loosely drawn unicorns, volcanoes, skulls, dragons, and even narwhals will scroll across your screen in beat and time with the music. The graphics are not just limp images; they're alive. Dancers dance, the narwhals leap and the dragons beat their wings, all in sync with the music. The boundaries rise and fall; lights flash, gleam, and swirl in time with the beat, as the music streams through your ears.

I'll take a moment aside here to mention that therein lies a hazard of the game: If you are in anyway sensitive to light, avoid Techno Kitten Adventure! Maybe it's not as much of an issue with the portable iterations, but on a full sized TV I was blinded, hypnotized and stunned by the patterns, flashes, and frankly drug-induced feel of the levels.

With a game leaning so heavily upon its musical aspect, it had better be good. TKA features techno songs that lend themselves to dancing, though admittedly I never jumped up and started to jig. The lyrics are in general syrupy sweet and happy, singing about love and needing someone, and all that other pop jazz. Musically, it is what it is; synths reign and ring, and the beats are rapid and rhythmic. I tend to enjoy this genre, and though I'm far from an expert, the songs are well crafted and catchy. I've caught myself humming them more than once since I purchased the game. 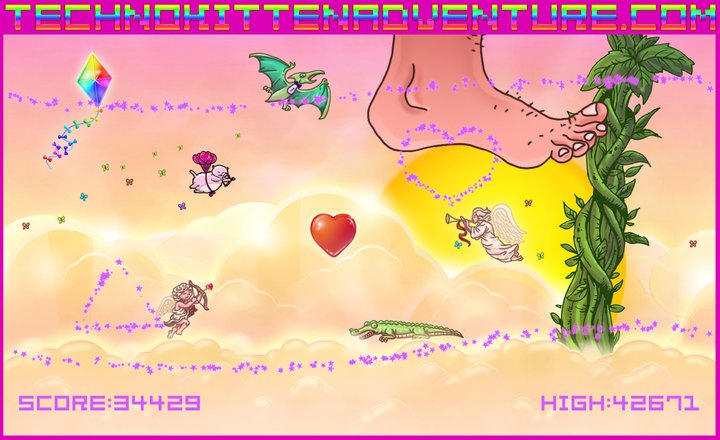 Surprisingly enough for a jaded gamer like me, the game is fairly clean. Some of the lyrics to the songs are a bit suggestive, but not explicit. There's also an Angel kitteh and a Death kitteh up for unlocking. Younger players might be frightened by things like the pink-haired skeleton and a rather creepish alien in the Popaganda pack, and the aforementioned pelvic-thrusting silhouettes could offend some. There's also the odd concept of cats made of bacon, steaks, and cheeseburgers for the meat level, which is itself composed entirely of meat.

In the end, I was pleasantly surprised by Techno Kitten Adventure. The game clearly takes advantage of the wild popularity of Icanhascheeseburger, and the culture it created, and I'm OK with that. There was one large issue I had with the game, however: Its fun to play on my Xbox, and especially when I want to take a break from more “serious” games and just play something fun and simple. I consider it well worth the price of admission. But it's short lived (it took me a few hours to 'complete' the game by unlocking all the kittehs), fairly easy after you play it for awhile, and clearly meant for portable devices. It's the type of game you fire up when commuting, or on a break, or when you want to look busy when your boss or family member walks by. It's not meant for the longer game sessions I usually look for when I turn on my Xbox. So though TKA gets a solid recommendation from me as a fun, entertaining (if possibly drug induced and definitely seizure inducing) little title, it's with the suggestion to avoid the Xbox version and consider instead a portable form. Still, for the monetary equivalent of $3, it's not a bad deal.