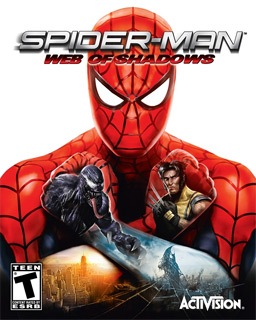 Let me just say this: Spider-Man 2 was and is one of my favorite games of all time. When I first played it, I couldn't believe the fluidity with which I could control Spider-Man; it was like I was actually Spider-Man. After that, Ultimate Spider-Man came along and once again impressed me with an interesting aesthetic style and the ability to play as Venom. Then Spider-Man 3 came out, and it was passable. It was a bit of a letdown after two fantastic Spider-Man games, but I still had hope that lightning would strike thrice and I would finally be able to play another amazing Spider-Man game. This isn’t it.

The game begins by foreshadowing the events to come: New York City is in shambles, Spider-Man is once again possessed by the Symbiote suit, and symbiotic monsters are everywhere. The man beneath the mask, Peter Parker, is being forced to decide what he believes in, and what he’s willing to do to save New York. Will you use your most powerful weapon to save the city, even if it consumes you?

This sets the stage for some dramatic decisions and events…that never take place. The fight between good and evil within Spider-Man plays a “big” part in Web of Shadows, but the game never takes full advantage of it. Other than choosing to ignore civilians in distress, choices are only available in cutscenes. At the end of an important event or boss fight, a screen appears asking whether you wish to do what the real Spider-Man would do, or allow the Symbiote to control your actions. It’s shallow, and fairly gimmicky, but I can forgive them since they at least tried to do something interesting. 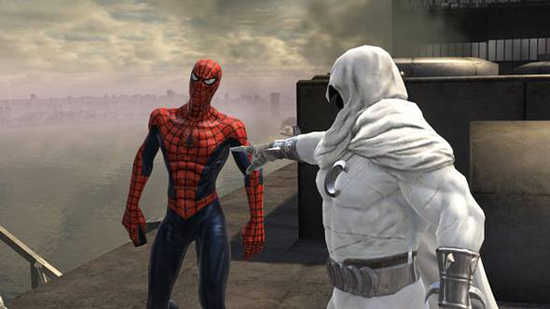 But I can’t forgive the absolute monotony of the story missions and combat. Now, I’ll be fair, the combat intrigued me at first. Spidey is far more acrobatic than he’s ever been, attacks are stylish, and combat almost has a rhythmic flow to it. Bounce off one enemy, swing kick another, and finish the last baddy off with an aerial combo. The black suit adds even more strategy into the mix, and whether or not you choose to use it can impact the story. Yet within the first hour the game begins to ignore the pace set and recklessly throw enemies at you, thereby forcing you to use the few truly effective moves.

It doesn't help that nearly all of the game’s missions are “defeat x number of enemies” either. I don’t mind going a round or two with some street thugs or alien monsters, but when the majority of missions task me with senselessly beating as many enemies as possible, there’s a problem. While roaming around the city, I didn't mind helping out the police with a crime; without the pressure of completing the mission, I could try out new moves and combos.

Of course, you’ll have plenty of time to practice considering that’s all you’ll be able to do after completing the game. You see, after defeating the last boss, choosing whether you’d prefer the generic good or generic evil ending, and watching the credits, the game dumps you back at the main menu without another word said. You can begin again at your last save, assuming you have one, and swing around NYC freely, but that can only keep your attention for so long with the absolute lack of any mission diversity.

By now you've probably seen a picture or two from the game, and you can judge for yourself whether or not that art style appeals to you. Personally, I enjoyed the vibrant colors, fluid animations, and partially destructible environment. That is, until I began getting into the more frantic sections. Slow-down, freezing, camera issues, and even mission ending glitches were frequent. Other than the main heroes and villains, character models are sub-par, and the lip syncing is way off. Not that it matters much, since they rarely have anything interesting to say, and even when they do, the voice actors sound very little like the characters they portray. 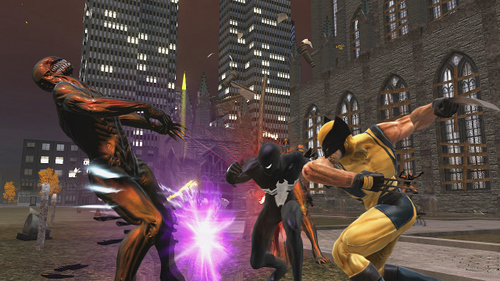 Now before I go in detail about the moral content of this game, I just need to point out that I played through this game as a 100% evil Spider-Man. I laughed as civilians were turned into monsters, teamed-up with multiple villains, and tore Wolverine (from X-Men) in half. Why? Well, I could give the “it’s for the review” excuse, but I’d be lying. One of the more interesting mechanics is the moral choice system, despite its shallowness. It's just fascinating to see what a truly evil Spider-Man would look like, and it's one of the only things worth seeing.

As Spider-Man, the game encourages you to save civilians, non-lethally defeat enemies, and get the girl who doesn't wear a skintight leather suit. But since I chose to be the “evil” Spider-Man, I ignored citizens’ pleas for help, showed no mercy when fighting, killed a few enemies in cold blood, and decided that the cat burglar with tight leather on at all times was a better match for me. Other than the obvious violence and sexuality warnings, light cursing is common, and drugs are mentioned. Also, the Symbiote aliens are quite creepy and bleed black blood when they die.

All right, I’m getting depressed only describing the bad about this game, and I don’t want to do that. There are a few positive aspects, like the…very thorough auto-save system. I never lost any progress, even when the game froze or glitched out. And being an evil Spider-Man was a blast, in an “I’m a horrible person” sort of way. I gained 755 achievement points within about 10 hours, that’s a positive right?

Okay, I give up. I can’t say anything else positive about this game; I tried. It should have been a sign that I would dislike this game when I put the auto-save system as one of the strong points. There are good things about Spider-Man: Web of Shadows, but they’re buried underneath a mountain of repetitive missions, technical problems, and moral issues. Perhaps a true Spider-Man fan would be willing sit through the experience, but I just can’t see anyone else doing that.