Thank you, 21st Street Games, for sending us this game to review!

Is a single joke enough to warrant the creation of a game? The developers at 21st Street Games seem to think so, and while I’d normally disagree, I’m thinking about letting it slide this time. Similar to the helicopter game that’s been drifting around the internet for some time now, Nyan Cat Adventure is all about avoiding the obstacles laid before you while racking up as many points as possible. The only difference is that Nyan Cat does it with a bit more: style, charm, insanity, color, diversity—the list is longer than the review itself.

Suffice it to say that Adventure is an example of style over substance, but that’s not to say it’s lacking in content. The game features five modes: Jump, Gravitate, Fly, Toast, and Party. Each pulls its mechanics from other games (Jump can be compared to any number of 2D platformers, Toast is very similar to the barrel sections in Donkey Kong Country, etc…), but they’re all done very well and even surpass the original games in some respects, one of them being the difficulty. I suppose others might frown upon it, but I found that Adventure’s high difficulty level to be one of its strongest points. The game won’t hold your hand, and it has no qualms about sending you to your death again, and again, and again, and again… 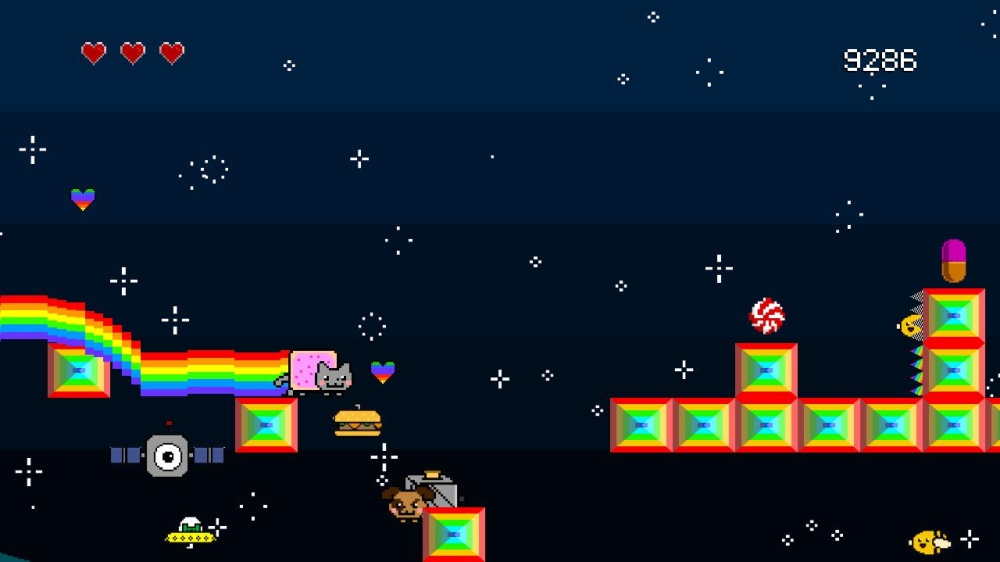 Nyan Cat just sits there, smiling as you keep on trying to get just an inch further, and even as you start becoming delusional, it stays just as upbeat as ever. Grinning from ear to ear, it just lays back and lets the addictive techno music play in the background as you fly your rainbow pop-tart cat through space. Yeah, I don’t know what they were smoking either, but apparently they put some of it in the game. Because, since the game just wasn't hard enough, they put in small “power-ups” (and by that I mean what I can only assume are illegal substances) that affect the screen in all kinds of crazy ways. Thought those precise jumping sections were tough? Try doing it while the screen is jittering like a 5-year old hopped up on caffeine.

Combine that with the title’s default mode of play, Party, and it almost seems as if 21st Street Games was trying to drive me insane. Whereas the other modes consist of only one style of gameplay, party mixes them all together in one big pile of joy and frustration. Each section only lasts a minute or two before seamlessly transferring to the next, and after it has gone through a full cycle, the difficulty is raised.

This mode alone justifies the purchase of the game in my mind; though that statement is more meant for iPhone users than the Xbox 360 crowd. Not because there’s anything wrong with the version I played, but because this title was clearly meant to be played in short bursts. A full play through only takes about five minutes (that is, if you happen to have superhuman reflexes), and it’s really not quite as much fun after the fourth or fifth time in a row. 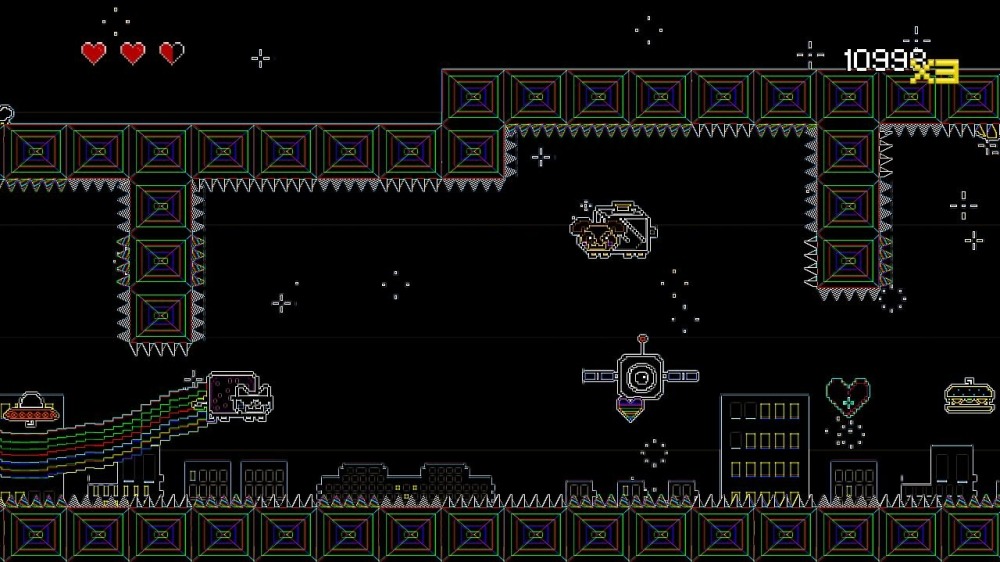 For an iPhone app, that’s not as much a complaint as it is an observation, as most apps are meant to be used on the go. Unfortunately, the same is not to be said for an Xbox Live indie title; instead, it’s practically a death sentence. Perhaps with multiplayer it would fare better on consoles, but as is, there just isn’t any reason to buy it for an immobile device. It’s fun, addictive, crazy, and even family friendly, but it just doesn’t belong here. Not to mention that the game features some special effects that, when viewed from an average sized television, could very possibly trigger seizures in those who suffer from epilepsy.

Which is really unfortunate, because the game is beautiful for the most part. Crisp 8-bit graphics are everywhere, and objects are painted in bright, vibrant colors. Thankfully, the developers also thought to include an in-game day/night cycle to ensure that the background never gets stale. Everything is upbeat and colorful, which I’m sure some would find sickening, but it really works here. Nyan Cat is silly, ridiculous, and lively, and that’s portrayed perfectly here.

So, is a popular meme a very good argument for a title’s existence? Eh, not really, but after playing Nyan Cat Adventure, I don’t really care anymore. I may have played it on the wrong system, but that didn’t stop me from having a blast. It looks good, feels great, and is fantastic as a time-killer, just not on this system.