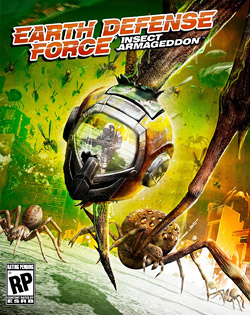 While I can’t say I’ve ever seen a cheesy ‘50’s B-movie, I’m pretty sure I know what to expect after playing Earth Defense Force: Insect Armageddon. Ridiculous monsters, convoluted plot, over the top action—yes, I’m confident that the team over at Vicious Cycle Software watched just a few too many cheesy 1950’s movies during development. I’m also confident in saying that the end product of all those late-night monster movie marathons paid off.

Imagine a game that combines third-person shooting with Starship Troopers (think humans vs. giant bugs), light RPG elements, and the craziest shoot ‘em up title you can think of. Earth Defense Force (EDF) is that game. Unfortunately, I doubt you’ve ever played it since it was never brought to the U.S., and the same goes for its sequel. However, the third installment finally saw a release in the form of Earth Defense Force 2017, and it was glorious. With its combination of split-screen co-op, dozens of weapons, and outlandish premise, the game was adored by critics and gamers alike. Not everyone loved it though, as its diverse ratings will show, but those able to get past its outdated graphics and somewhat repetitive nature found a satisfying experience.

This latest installment hasn’t changed too much from its predecessor, but there are some noticeable improvements. The game’s objective is still to shoot thousands of giant alien bugs, robots, and everything in-between. Using tanks, bipedal mechs and an entire arsenal of weapons, you must rid the city of this alien infestation, even if there isn’t much of a city left afterwards. I mean, with all the rockets flying around, you’re bound to hit a building or two, and Vicious Cycle was kind enough to make the entire city destructible. Buildings, cars, random objects lying on the ground—everything can be destroyed, and it looks and feels awesome, especially when compared with the last title. 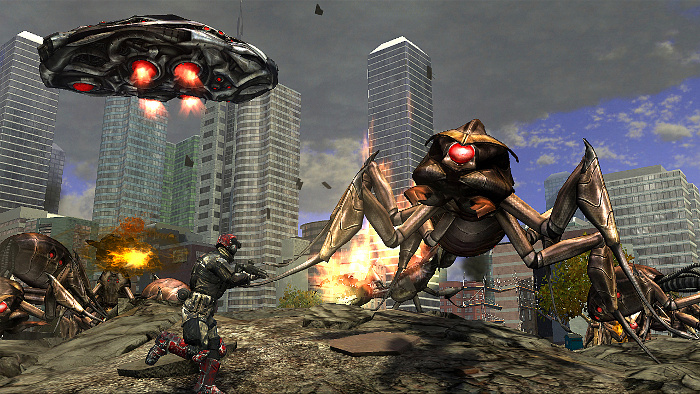 The graphics have received a much needed upgrade, along with just about everything else. Three new character classes, survival mode, and online multiplayer make this a definite step above 2017. It’s unfortunate that there is significantly less content here (more on that later), but it’s so well polished that I still feel my money was well spent.

Think of EDF as a B-movie. It’s ridiculous, cheesy, and a blast to play with friends, but with no plot to get in the way. And when I say ridiculous and cheesy, I really mean it. This game is a budget title, and it wears it like a badge of honor. The game cost $40 at the time of release, does NOT include an instruction manual or tutorial, and contains three different languages on its case. The voice acting (if you can call it that) sounds like something out of a Japanese monster movie; the graphics are stylized and without much detail, and objectives rarely deviate from “kill everything that moves”.

For any other game, this would be an immediate turn-off, but Insect Armageddon embraces it wholeheartedly. Every mechanic and “flaw” here works to serve the game’s purpose: shooting legions of alien bugs and robots. All of the artistic elements (graphics, story, and sound), while somewhat lackluster, help to reinforce the gameplay in some way. The “simple” graphics prevent slowdown, and audio cues are used to alert you to an enemy’s attack. The story, which can be summed up by “you’re a soldier, so go kill stuff”, helps cement the B-movie feel.

Unfortunately, just like a B-movie, it doesn’t last long. There are 15 campaign missions spread across 3 chapters in addition to 6 survival maps. The game encourages multiple playthroughs to level up the four classes on different difficulties, and a remixed campaign can be unlocked, but it’s still a quick game. Unless you have a good group of friends, I wouldn’t plan on spending more than 10 hours killing bugs and leveling the city. 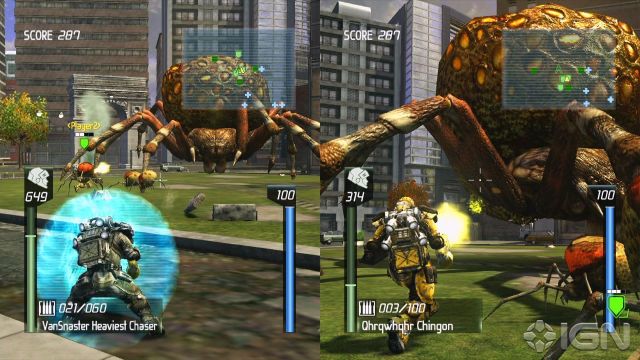 Don’t get me wrong, though; it’s amazing while it lasts. There’s nothing quite like destroying the city with a rocket launcher while flying around in your jet armor, or playing as any of the classes for that matter. There are three new classes (and four in all) in Insect Armageddon: battle (can use a shield and wield larger weapons), tactical (can deploy turrets, mines, radars and other equipment), the aforementioned jet, and the returning trooper armor (best all-around).

As you progress through the campaign, each class levels up and gains new weapons and abilities. New weapons can also be found on the ground after defeating a high-ranked enemy. This is where the problems start. Now, each of the four classes has their own set of weapons, which none of the other classes can use. When the player picks a weapon up off the ground, there is no indication what class it’s for. It wouldn’t be a problem if it was always for the class currently being used, but it’s not. I had to go to the character selection screen and go through all the guns to find out what I had unlocked.

This problem is exaggerated even more by the rarity of finding new guns. Compare it to trading cards: in the beginning, you’re finding new cards all the time. But as you acquire more and more cards, half of the cards you buy are duplicates. That’s how gun pick-ups work here, and it’s not efficient at all. After a certain amount of time, maybe one-fifth of the guns will be new. It’s frustrating to defeat a challenging boss and be “rewarded” with a gun you already have

But I can only rant for so long, because I’m overjoyed to say that not only does split-screen multiplayer return, but online play is also available. The entire campaign can be played cooperatively (two players), both online and offline. The survival mode can also be played in split-screen mode (two players), but the six player online is the real draw. 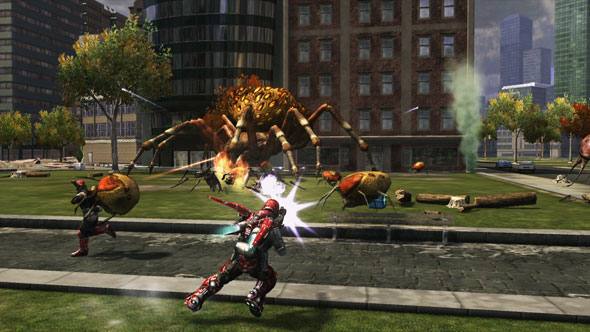 Anyone can pick up and play Earth Defense Force. With its relatively simple controls, straightforward objectives, and great split-screen and online modes, EDF makes for a great game to play with friends. And since the campaign is rather meager, that’s probably where you’ll be spending the most time playing. The option to play with random people is present, but players without an internet connection should take note.

It probably should go without saying, but not everyone is going to be able to enjoy this game. Not because of gameplay (though it’s possible), but because of entomophobia, otherwise known as insectophobia, or fear of insects. Ants, spiders, hornets, and ticks are encountered throughout the course of the game, and while I don’t believe they’re “scary”, not everyone will agree. Green or orange blood gushes out when bugs are shot. Cursing is frequent with b*****d, d**n, and h*ll used throughout. Unfortunately, the game’s photo gallery also includes seven hidden pictures of women in skimpy clothing. The pictures need to be unlocked via a secret code, but it’s an odd inclusion nonetheless.

I cannot adequately describe how enjoyable this game is. Earth Defense Force: Insect Armageddon is a game in the purest sense of the word. No gimmicks or complexity; just you, a completely destructible city, and an army of bugs to slaughter. It’s not a long game, and there’s more objectionable content than I was expecting, but it’s a ton of fun and worth checking out—as long as you’re not squeamish.