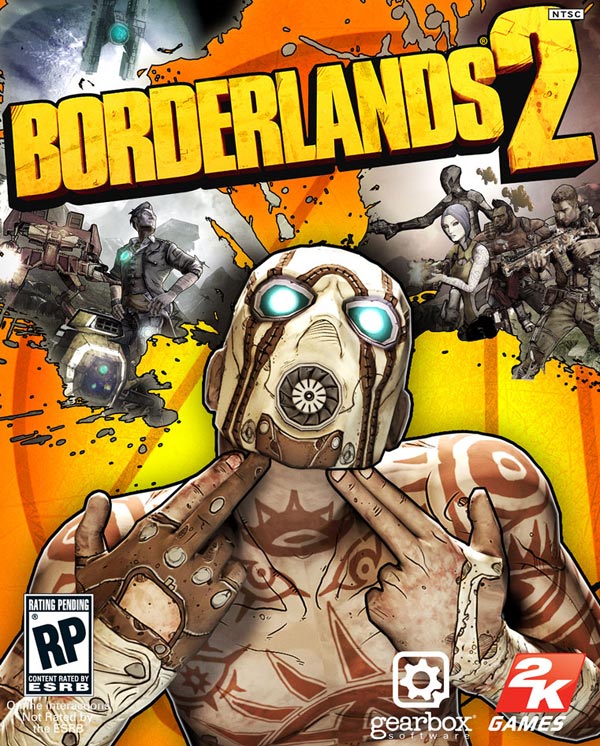 In 2009, Gearbox Software released Borderlands, a ridiculously fun RPG-shooter built around loot and crude humor. Its promise of hours of bloody chaos and billions of guns to choose from drew millions of gamers to it, and it quickly became a fan favorite. With such a hugely successful title, it left people wondering how in the world they could build a better sequel.

Fortunately, Gearbox Software did that and so much more: Borderlands 2 gives players more guns, more crude humor, and more killing than its predecessor could ever have dreamed of. It returns to the planet of Pandora as four Vault Hunters have arrived seeking vast fortunes in the form of Vaults: ancient chambers filled with rare and valuable alien technology that can only be opened by a Vault Key. Their mission quickly changes, however, when the planet’s rich dictator Handsome Jack attempts to murder them and leaves them for dead on Pandora’s frozen tundra. After being rescued by an isolated robot CL4P-TP (or Claptrap), the heroes join a resistance group to attempt to take down Jack and free Pandora. While not the most original or mind-blowing narrative ever fabricated, it easily trumps its predecessor’s weak and forgettable story.

The stories you will remember, however, are side quests. Each one is beautifully written and perfectly crafted to flesh out the world of Pandora and its inhabitants. Most of them boil down to "kill this enemy" or "get this item," but the writing behind them creates much more life. Little Easter Eggs also add to the enjoyment: some of my personal favorites include following a leprechaun to his secret stash and hunting four teenage mutant ninja rats.

Throughout the central story and countless side quests, the focus will always be on getting better loot. Players can find guns, grenades, character skins, vehicle skins, class mods, and relics throughout Pandora. Enemies drop some loot, but the rarest goods can only be found in the game's various treasure chests; ammo crates, car trunks, and even outhouses hold goldmines of precious loot. These new weapons will then be used to kill more enemies, find more treasure chests, and get more loot. The game randomly generates stats and custom effects for weapons, so no two are ever the same. 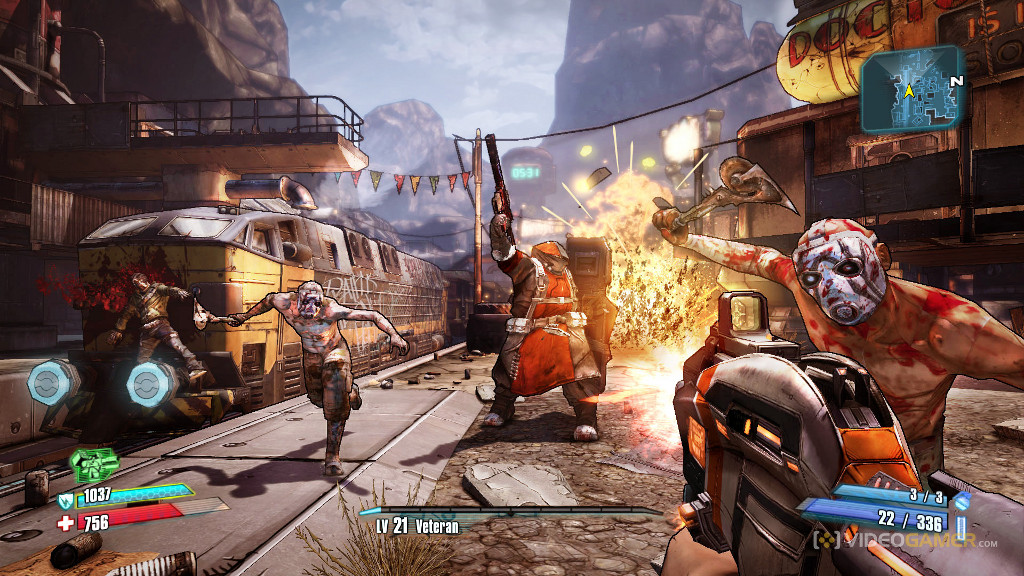 With so much gun dependency, it is good that Borderlands 2’s combat system works flawlessly. The controls are easily memorable and kills are satisfying every time. The character classes add some strategic flair to the typical FPS combat: each class has its own special ability. The Commando has a turret he can drop, the Gunzerker can pull out a second gun and blast away while regenerating ammo, the Assassin turns invisible and gains a one-time damage modifier, and the Siren catches enemies in her Phase Lock ability, freezing them and levitating them in mid air with her mental powers. Each one also has 3 skill trees, which build on their abilities, preferred weaponry, and defenses. Couple that with the enormous weapon variety, and you have the makings of truly unique characters.

Borderlands 2 also includes dozens of challenges to complete, ranging from getting a certain number of kills with a type of gun, reviving your allies a certain number of times, or environment-specific events like launching yourself from a geyser onto a pig-shaped motel sign. Completing these challenges awards the player points for his "Bada** Rank." After accumulating a certain number of points, they turn into tokens, which can then be redeemed to increase the character's base stats, like gun damage, recoil reduction, fire rate, and shield recharge. Each token gives less than 1% towards the stat, but points accumulate quickly, and in a firefight, every point counts. The rank is also universal; points given to one character goes to all other characters that player has, and all challenges completed by individual characters work towards the same rank.

Many people complained about the lack of enemy variety in the first game, and Gearbox paid close attention to these complaints. In Borderlands 2, you will face off against bandits, mutant dogs, exploding robots, escaped lab rat experiments, invisible dragons and many, many more. Borderlands 2 also includes a myriad of bosses and mini-bosses, each with its own personality, weaknesses, and custom weapons to loot. Mini-bosses will also respawn a little while after being killed, giving you the chance to try for even better loot.

Lucky for you, you will not have to face all of these enemies solo. A friend can join in from the couch beside you, or you could connect with up to three friends or strangers online. Unfortunately, this is where one of Borderlands 2’s most glaring flaws presents itself: all loot is shared, meaning getting gear is on a first-come-first-served basis. If you have overly-aggressive friends or get paired with the wrong crowd, you could end up with outdated equipment very quickly. 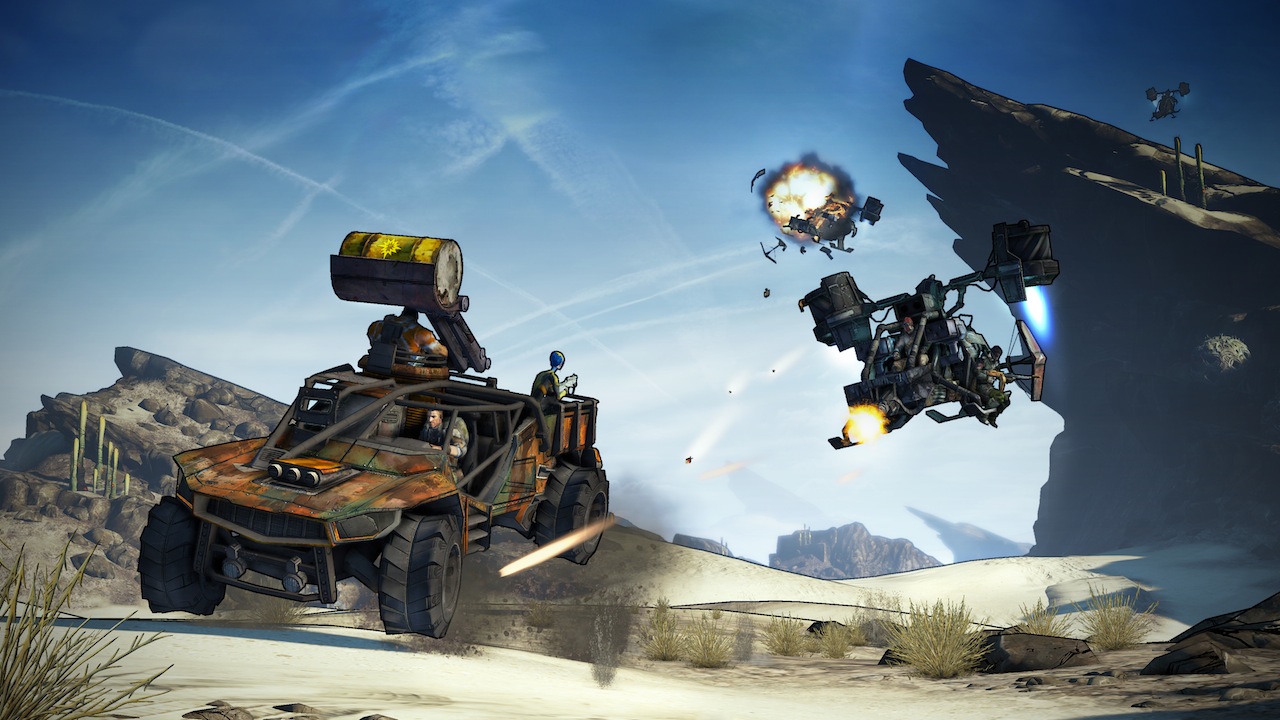 Two areas of the game still suffer slightly from a lack of improvement, though: vehicular combat and graphics. While the game adds a new four-person truck, and some artifacts give you minor vehicle bonuses, it feels more like it was a bonus thrown-in to attempt to appease complaints than a fully fleshed-out mechanic. In the same way, the graphic-novel style graphics look gorgeous, but there are still pesky texture load times that occasionally glitch and fail to fully load, resulting in blurry backgrounds (at least on consoles). Gamers complained about character customization in the first game, as well, so Gearbox implemented collectible skins for characters and vehicles, which are basically color-combinations. Unlockable character heads give a little more customization, but it would have been nice if players could change everything about their character, like most RPGs do.

While Borderlands 2 is one of the most fun games to ever be created, it is also among the most vulgar. If a word could possibly be considered profane, I guarantee it is somewhere in the dialogue of Borderlands 2. Sexual jokes and references are made throughout the game, both in the main storyline and in its numerous side quests. One of the side quests also involves you helping a cult that worships a fire-controlling Siren, including sacrificing people and killing off a “rival god.” Some women wear revealing clothing, but it’s treated more as a joke than to be seriously sexual. To top it off, Borderlands 2 utilizes gallons and gallons of blood pouring from wounds, decapitations, and exploded bodies, with graphic burns from acid and fire. The gore can be turned off, but the game was obviously designed with it in mind.

Even with its few technical quirks and lack of customization (by modern standards), Borderlands 2 is a ridiculously fun game. By combining RPG elements with the standard FPS formula, Gearbox brings us another excellent experience that stands out from its competition. It is definitely worth a shot, if you can look past the countless moral issues and control video game addictions, because once you pick it up, you will probably be hooked on Borderlands 2.