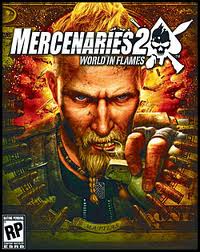 Note: At the time of release, this game featured two-player co-op, which has since been disabled by EA, so I will be unable to comment on it.

Everybody loves watching explosions. Why? Maybe it could be something about the ball of flame, or perhaps the huge amount of force released within such a quick period. Entire TV shows have been based solely on the premise of blowing stuff up. Even a few videogames have tried to get in on the action, and tried to fill our need for explosions. The first Mercenaries title (released on the PS2 and original Xbox) was one of these titles and critics praised it for its fun gameplay and highly destructible environment. Players could destroy any of the game’s structures, including a faction’s HQ. Once most people got past some of its small flaws and likeness to GTA, they found an explosive and enjoyable experience. It seems the same is true of this installment, but this time it’s a bit harder to look past all of the problems.

Most of the gameplay from the first title has been kept intact, and that’s definitely a good thing. Just like the first game, you’re given a choice of who you wish to play as when starting a new game. There are three characters in all, and each one has a specific advantage such as increased ammo capacity or quicker health regeneration.

In between roaming around Venezuela (where the game is set)—“borrowing” vehicles, shooting soldiers, and leveling cities—players will complete missions for five separate factions. Whether it’s blowing a building sky high, or killing an opposing faction’s commander, everybody needs someone to do their dirty work. While these aren't particularly challenging or thought-provoking goals, they are a good excuse to cause some mayhem and destroy a few buildings.

Also returning from the previous title, a faction mood meter adds an element of strategy and choice to the missions. Instead of being able to complete a mission at any given time, the faction mood must be taken into account. If you've been completing missions for one faction, by killing or destroying another faction, then that other faction won’t be in the mood to talk, let alone sell you supplies. Unless you don’t mind losing thousands of dollars to bribe all the factions you've ticked off, juggling what missions you complete is key. It’s a superficial element, as you’ll almost always have enough money to use as a bribe, but it made me consider which missions to do if I wanted to buy extra supplies. 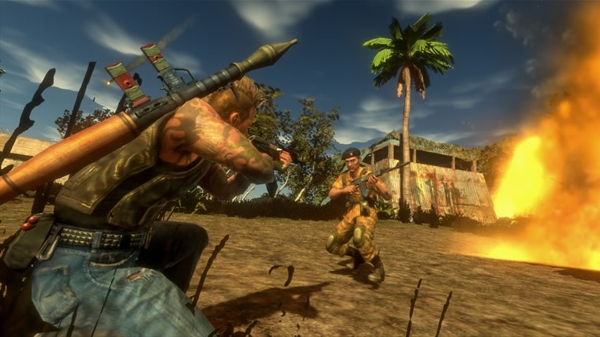 Speaking of supplies, the airdrop system is back with even more vehicles, weapons, and airstrikes. Instead of having to find or store vehicles or weapons, Mercenaries allows players to buy or earn these items and use them at a later time. Stranded in the middle of a lake? Shoot a flare to call for a boat. Need something blown up? Pick which type of bomb you want and use your laser pointer to designate the target. Other games have had similar systems, but this one just has so many items and weapons. There’s even a nuclear bomb if you really want to do some damage.

A color scheme is an important thing when designing a game’s artistic style. Mercenaries 2 starts out well in this aspect, with beautiful bright green vegetation, a brilliant blue sky, and well designed character and vehicle models, but I quickly realized that this doesn’t represent the entire game. The vibrant greens and blues fade and intensify as you move from section to section. There is no cycle; some areas are eternally brown and cloudy, and some areas have clear skies and bright colors 24/7. It irritated me that some sections always looked awful, while others were fantastic.

Thankfully the character and vehicle models fare slightly better. Most vehicles are rather average looking, both in design and appearance, but there are plenty of crazy rides as well. A motorcycle with dual miniguns and a sports car with a rocket launcher are just a few of the ways you can cruise around the city in style. Characters also look great, at least until they move: animations are stiff and unnatural. I suppose the problem is that for everything Mercenaries 2 does well, it does something else poorly.

Prepare yourself, because I’m about to spoil the entire plot of this game. You got shot in...a very sensitive area during your last mission. Now, go get your revenge, and kill anyone who questions your dubious morals. Deep stuff, huh? Final Fantasy has nothing on this action-packed adventure. Sarcasm aside, this title obviously doesn’t take itself too seriously, and while I think it could have been taken even further, I did chuckle a few times at the sheer absurdness. 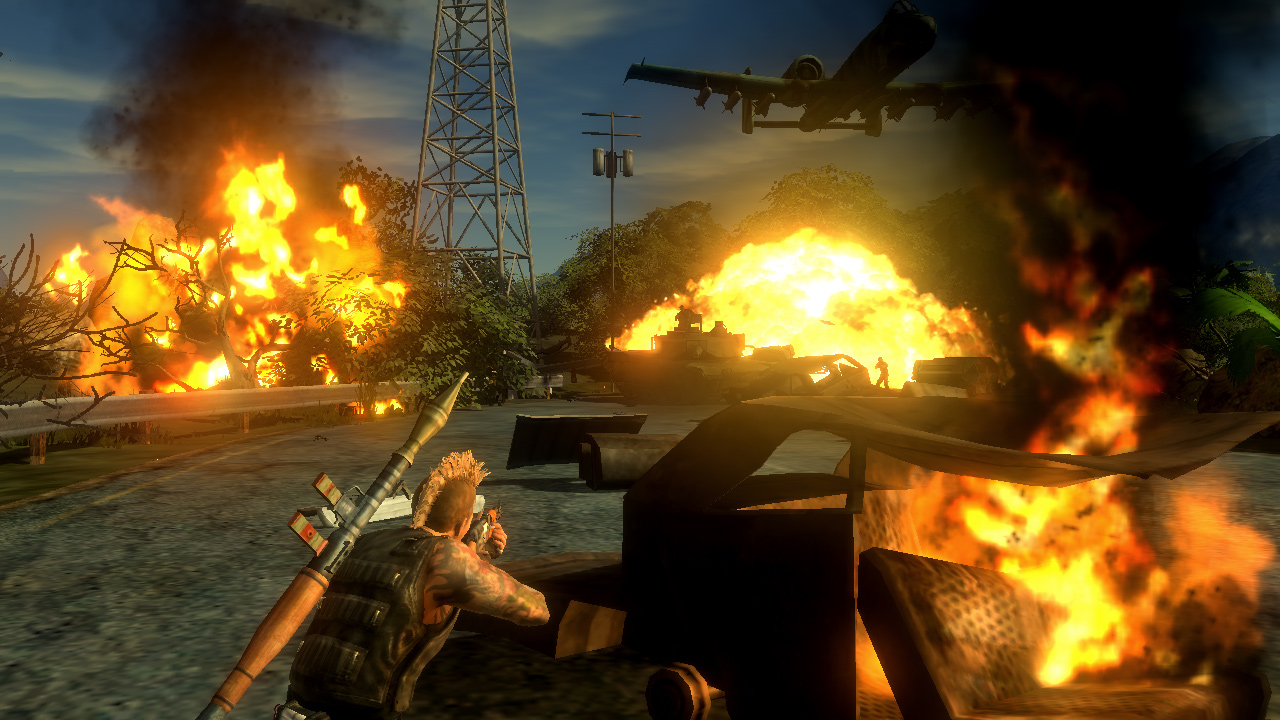 I really can’t say all that much about this game's sound, other than that it’s…sound. There’s a fairly decent voice cast, and they do their jobs well. Each character’s voice and dialogue fits well within the character’s personality. The sound effects are fine, and the music is okay. After playing for a few hours, I just began to listen to music while reading the subtitles. Nothing made me want to listen to the game; not because it was bad, but because it just doesn't add anything to the game.

I’m sure I’ll get plenty of flak for this statement, but I don’t like the way cars handle in GTA. No matter how hard I try, I just can’t adjust. That’s why I was so ecstatic when I got a hold of a car in Mercenaries 2, and I could drive it! In fact, I could do everything well, right from the beginning. I didn't have problems with any of the controls. Character controls are tight, with a Call of Duty style aim assist (zoom in/look down the sights to move your cross-hair to a nearby enemy), and a natural button layout that I easily adapted to. Vehicles control even better, with physics (almost) reminiscent of Burnout. Plenty of drifting, but never out of your control, Mercs 2 hits the sweet spot. If there was one flaw, it had to be the quick time events. When hijacking an armored enemy vehicle, a short quick time event (2 to 3 steps) would pop up and determine whether you would successfully commandeer the vehicle.

With a name like Mercenaries 2: World in Flames, I can’t say I was surprised when I began to see plenty of objectionable content. As expected, there’s plenty of violence, but surprisingly the game strongly discourages attacking civilians, and even subtracts money from your (in-game) account if you hurt any citizens. Cursing, while not constant, was a common occurrence, with mostly a**, b*****d, and h*ll used, but, unfortunately, the characters also use the Lord’s name in vain. The “Use of Alcohol” and “Use of Tobacco” descriptors are both self-explanatory, and not worth noting since the player’s character doesn't actively participate in either of these activities. Most, if not all of these are to be expected from a T-rated game, but there were two things that I didn't see coming. The first is a skintight/revealing unlockable outfit for one of the characters. The other thing…is a nuclear bomb. I receive two reactions when I tell this to people. Either “0H MY G0SH, Y0U C@N NUK3 STUFF?!?!” And, yes. Yes you can. But that other response is people horrified that a game would include such a destructive weapon. All of this brings up a question of ethics and morality, which I can’t answer in this review, but the question/problem is there.

I had fun with Mercenaries 2, but I realized something once I set the game down: it’s an incredibly shallow experience. The gameplay can be fun (it’s hard to make explosions boring), but most of the creative/artistic elements fail. The visuals are bland, the music is forgettable, and the story is barely worth noting. It has its audience, (which is more than I can say for some games) and I’m confident that most teenagers will love it, but I don’t think everyone else will. It’s a not a bad alternative if you don’t want to (or can’t) play GTA or other similar open world titles, but otherwise I’d give this one a pass.