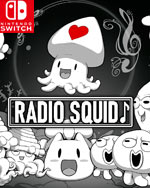 Thanks to Ratalaika Games for sending us a review code!

Zzzzzzz. Another typical day at Ink & Shell Ltd. You are a squid, the boss of Ink & Shell, and you are doing what you do best: sleeping. Your employees, a various assortment of hard-hat wearing cephalopods, have been working hard on your behalf and they’ve finally found the thing you’ve been looking for: The Siren’s Song. You are awakened unceremoniously by your starfish secretary and guided to Ink & Shell’s chief scientist. After gifting you with replenishable bombs, he gives you the go-ahead to enter the safe room and obtain the song. But not so fast. As you touch the song’s music box it disappears and the voice of the Siren greets your ears. It turns out she doesn’t appreciate theft and decides to curse you with the worst case of insomnia ever. The only way to cure it is to find the Siren at the bottom of the ocean and bring enough coin with you to reimburse her for the song you stole.

Radio Squid is an 8-bit twin stick shooter with light puzzle elements that feels like it’s been ripped straight out of an arcade. Developed by Pixelteriyaki, gameplay involves defeating sea creatures in a labyrinthine series of rooms under the sea. Equipped with nothing but an incessant jukebox of music that causes bullets to rhythmically fire out of their body, players must learn enemy attack patterns and fight bosses in order to lift the musical curse. But with a library of fantastic chiptunes and gameplay that deftly balances slow and deliberate puzzle play with quick reflex driven shoot 'em up madness, Radio Squid just might see players cranking up the volume instead and taking a deep dive into this sneakily difficult experience.

When you arrive in the first room of World 1 a text scrawl informs you that popping music bubbles will trigger your bullet spraying ability. How the bullets fire off into the sea is up to you. Before beginning a new game, you will be prompted with 4 different firing options: guided shot style 1, guided shot style 2, bi-directional shot, and wild shot. The guided styles fire a stream of bullets (based on the music of the level) from your squid in one direction. This direction can be changed by pressing X,Y,B,A, or by pressing the arrows on the D-pad, depending on which style you chose. Bullet direction can also be changed with the analog stick opposite the one you chose to move your squid around. The bi-directional shot alternates between two opposing directions when it fires and the wild shot fires randomly out of all 4 sides of your squid. I found guided shot 1 the simplest to use and used it throughout pretty much my whole playthrough, though I did have some success with the bi-directional shot. 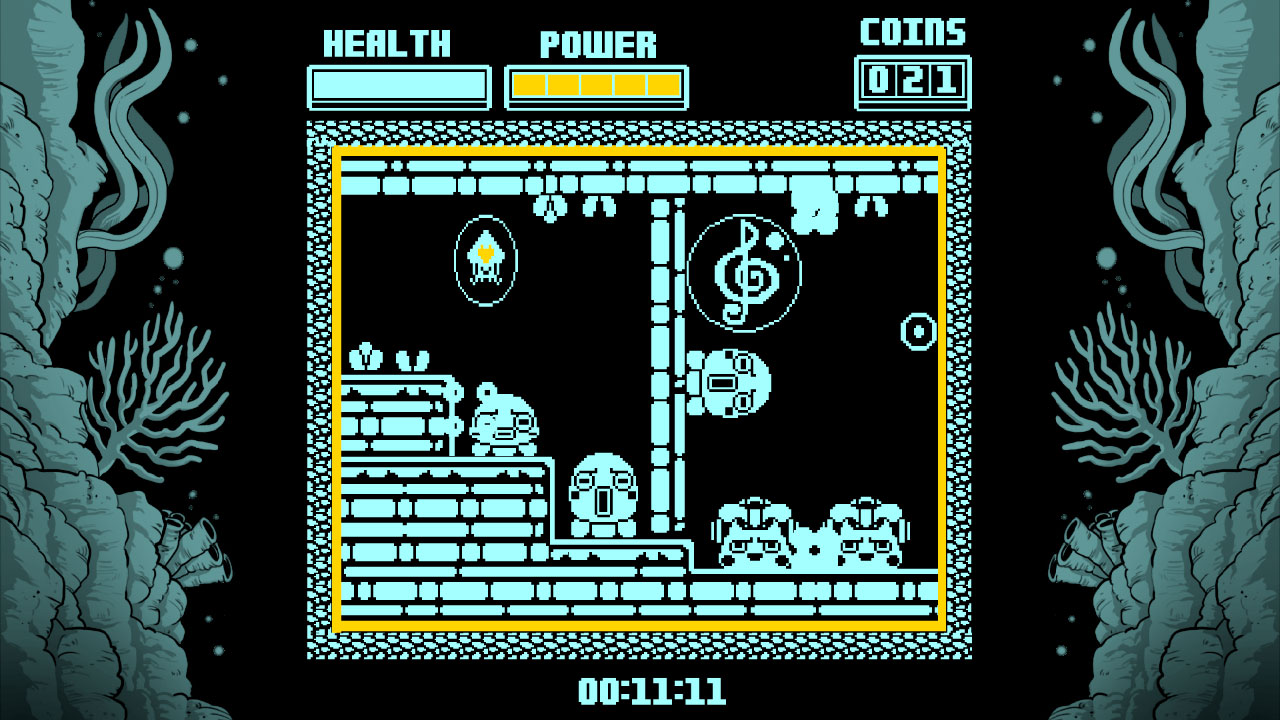 Enemy sea creatures in a room must all be killed with your bullets before you can move to the next room. There are several different enemies and all of them have different ways to hurt you. The trick to beating a room without taking too much damage typically involves positioning yourself strategically so that when you pop the music bubble your bullets start hitting enemies. The biggest issue you’ll encounter from the very first room onward is when your bullets miss; stray bullets will bounce off of walls and anything invulnerable to damage and come right back at you. Many puzzle rooms have openings on more than one side. You can fire bullets into a hole on one side of the screen and if there is a corresponding hole on the other side, bullets will come through it back into the room. Traveling to different parts of a walled-off room works the same way, and part of solving some rooms requires you to dip in and out of walled-off areas in order to kill everything. This technique alone elevates Radio Squid above just another twin stick shooter and really encourages you to plan ahead before you go for the bubble.

At the top of the game screen is where you will find the 3 essential aspects of your squid: health, bomb power, and coins. 5 tick marks indicate how many bombs you have. Each time you use one in a room, stray bullets, enemy projectiles, and some obstacles will immediately be turned into coins. Collecting coins adds to your wallet, and you’ll want plenty of them because when you die you lose a lot. I’m not positive on the math but it seems like the number of coins lost each time you die is around 80% of your total wallet, sometimes more. If you manage to have less than 10 coins in your wallet when you die you get a game over, and you must start back at the beginning of the world. There are 6 worlds in total with 4 levels in each, which makes Radio Squid a shorter game. That’s not an issue though because the game is about room mastery and padding your wallet rather than simply beating worlds.

I found this out the hard way. I hadn’t played very many arcade style shoot 'em ups before this one so it took me some time to get the feel of moving around in a room while avoiding my own bullets. Though technically not a manic shooter, "manic" certainly describes the feeling I had while dodging enemy projectiles and ricocheting bullets in often cramped quarters. I died a few times in the first world but I always managed to have enough coins to keep going. Then I reached my first boss. Bosses are much harder than any room of enemies and require practice and patience to memorize their patterns. After a couple of game over screens I tried a different path in World 1 and was treated to a different boss battle, this one easier than the boss I had been fighting. Still, I barely squeaked by, with only 15 or so coins to my name. Between worlds the game offers you upgrades you can pay for; these range from simply healing you to giving you permanent boosts. There are other upgrades that can be found by shooting obstacles in rooms but the end-of-world upgrades are the best. I couldn’t afford any of them though, and this is where I started to understand the mastery element required to truly do well at the game.

After 5 worlds of repeating that same pattern over and over (getting crushed by a boss and ending the world with 20 coins or less) I pushed through World 6 to the final boss. This one-eyed maniac is ridiculously difficult and by the time I finally beat him I was spent in more ways than one. I finished the game with a measly 16 coins. Without spoiling the ending, let’s just say the Siren wasn’t pleased with my offer. My ending was the equivalent of a participation trophy, but I didn’t feel cheated. I’m sure there are better endings to be experienced but after my fourth time failing to get a better ending I decided to give it a rest. 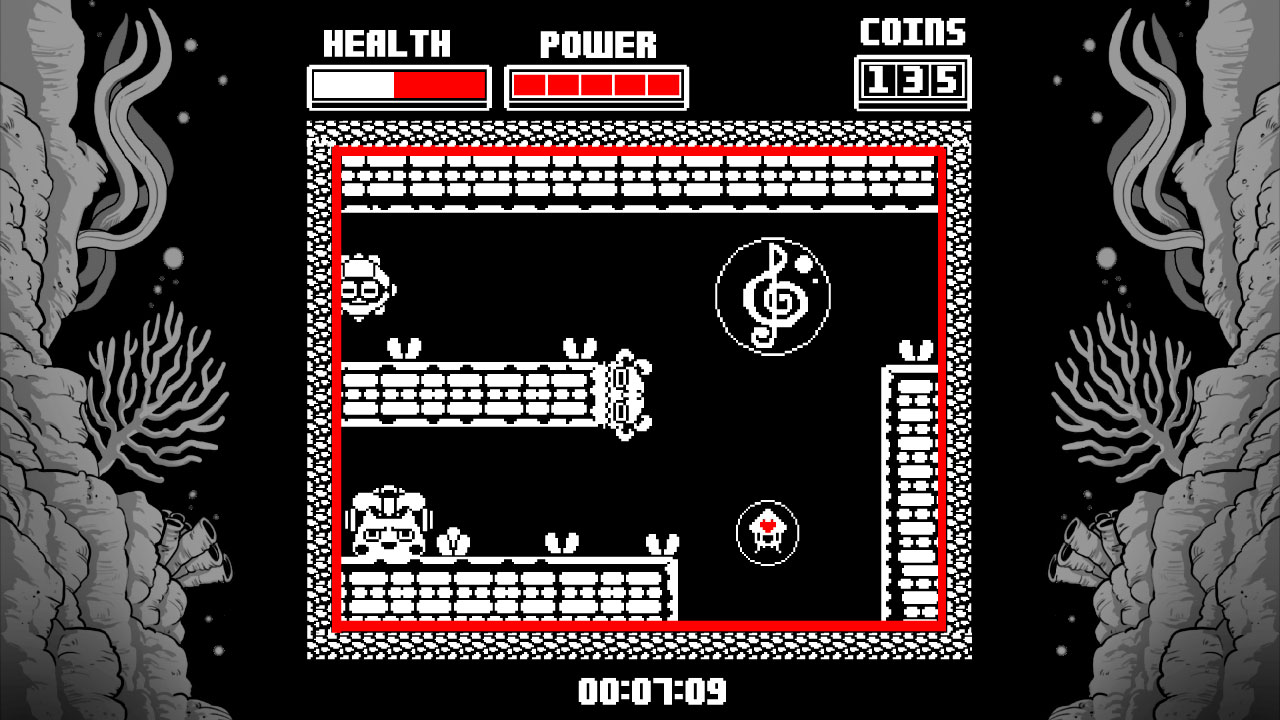 One criticism I have of the game is that the other worlds can become obsolete once you reach World 6. If you play the first 5 worlds optimally (a difficult feat) and are able to purchase some of the more expensive 50-coin or 100-coin upgrades before World 6, there is no reason to play early worlds again. Beating the game sends you back to the beginning of World 6, so you can just try over and over until you get the ending you want. I got good enough at the rooms in World 6 to start the final boss fight with 150 coins or more. Assuming I magically beat him in one try and used up my power bombs for extra coins, that would be about 200 coins to give to the Siren. If the coin count to get the best ending from the Siren is more like 500 then I really am terrible, but I would suggest playing the other worlds again anyway to find some other optional bosses and listen to some sick beats.

All 11 music tracks provide for some really great listening, and they all seem to have some fun, muddy bass that makes you really feel like a squid swishing through the sea. They can all be listened to individually from the main menu by choosing Sound Test. I was a bit disappointed when playing levels because it was hard to tell sometimes how the music was influencing your bullets. I thought maybe moving the squid to the beat of any given song might help but it didn’t. Generally, busier moments of a song cued more bullets to be fired and slower moments lowered the bullet count. The only other sound complaint I had involved the text menus. I laughed when text would scroll because each word sounded like the footsteps of a giant; loud and obnoxious.

There were only minor morality concerns in the game. One I caught was a text bubble in the beginning of the game. I believe it’s implied that a side character curses but the letters are substituted for symbols so it’s impossible to know what the character said. When you hit enemies with bullets they simply turn red for a brief second; hit them enough and they disappear. All of the enemies are cartoonish and fun, but the game still does a good job of making some bosses feel terrifying to fight.

I had a blast playing Radio Squid. I tried several different controller variants (Gamecube controller, attached Joy-Cons, detached Joy-Cons) and all of them felt great. Like classic arcade games, the game can be easily played by any who are interested but true mastery takes dedication and talent. This game is a steal at $4.99 and anyone with a love of classic 8-bit graphics and chiptunes will not be disappointed. Pop on a pair of nice headphones, do some hand stretches, and try not to lose that hard-earned money.