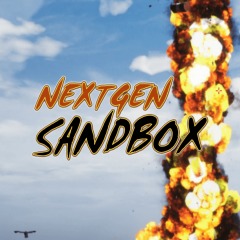 Thank you, Proud Arts, for sending us a review key!

I don’t know of a game that earns the descriptor “sandbox” as accurately as Nextgen Sandbox. That’s not to say it is better than Minecraft, Breath of the Wild, Garry’s Mod, or any other game which has been given that descriptor. Any of these other games, and perhaps the Unreal engine running this one, would be a more constructive use of time. Nextgen Sandbox feels like a more true sandbox because it creates open spaces in which a limited number of objects can be banged together, often shattering one of them. The tools are simple, easy-to-use, and very limited. The main goal is the joy you find yourself. If available in Unreal as a showcase of objects and physics interactions, it would be a useful taste of what the engine can do. Since Nextgen Sandbox is standalone on a console with no ability to export creations, I don’t recommend it. Other games facilitate better destruction, and other tools facilitate better creation.

I may be unimaginative, but the main menu video clips (also found in the game’s trailer) of Nextgen Sandbox offered a fair depiction of my experience. On an infinite cobbled plane, a fence is shot with small round pellets. The wood splinters. A red barrel sits beside two brick walls near a palm tree, a trash bag, and a stack of tires. When shot, pieces of the wall break off. The barrel, of course, can be coaxed to explode, shattering the walls into individual bricks. These moments are fun enough to watch, I suppose, but none are lasting entertainment, and entering an editable world to set up brick walls myself did not enhance things much. 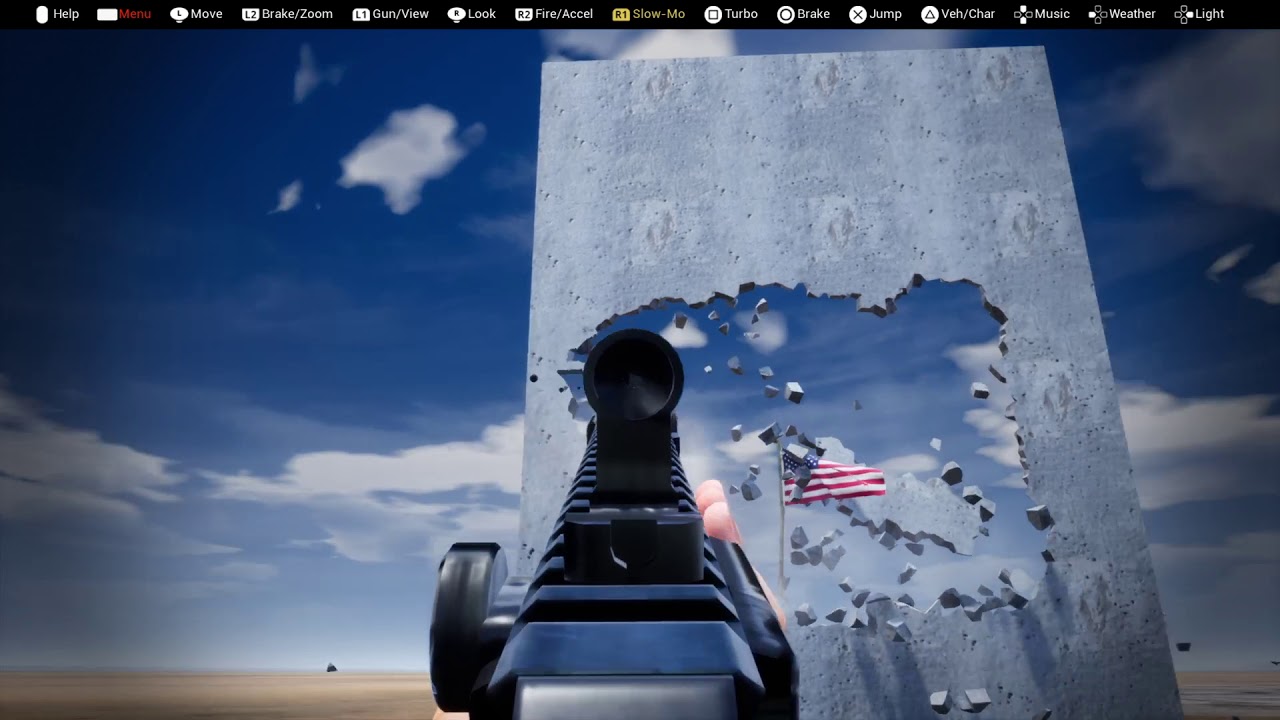 Strong Points: Simple editor interface and character controls; quick drop-in drop-out editing and interaction; many dynamic walls and materials
Weak Points: Objects usually interact in kinetic, destructive ways, limiting construction potential; placed humans have almost no interactions with the world; the limited object set cannot be edited; objects are difficult to connect, making structures hard to create; objects match few others in theme or design; object interactions can be buggy, especially in the bonus horror game; no ability to export creations
Moral Warnings: Red blood splatter on screen when character takes damage; human targets can be placed and shot, though most do not respond; animals can be killed; some disturbing images, such as hanging bodies, a ghost, and various creatures that can attack the player character; some skimpy clothing

Nextgen Sandbox offers eight environments to place objects in, each mostly flat. The Moon environment has craters and lower gravity. The Badlands and Snowy Mountain each have hills in the expected colors. Whether the ground be sand, asphalt, or stone, there is little to look at. In one way this works in the game’s favor; most of the 115 or so objects which can be placed in each of these worlds won’t blend in with whichever environment you happen to choose, and the most fun objects might as well be placed on the featureless Grid environment for all the difference it makes. The game’s achievements encourage you to explore each environment to find easter eggs from a creepy girl to a can sitting on the ground. Less dull achievements involve using a wrecking ball and teleporting chickens: fun in their own right, but enjoyable for about the time it took to write this sentence. A bonus game is offered as the reward for clearing all objectives. This bonus is, as best I can tell, the main reason to give the game an M rating, and we will return to it later.

Placeable objects include cacti, a single door, cubes of glass, a small house, an ATV, an elephant, a freeway overpass, a bounce pad, and an unmoving sorceress. There are over a hundred other objects, but I hope this gives an idea of the randomness with which they seem to have been chosen. Some are remarkably uninteresting. The field of grain is just that, and the leaves don’t brush aside as you enter. The sorceress - and most of the other humans, for that matter - hardly responds to anything around her once placed in the world. The alligator might attack chickens, and it certainly attacks the player character when you decide to drop into the world. When the player takes damage, the screen flashes red and is outlined in blood textures. A few objects are fun, such as the merry-go-round, teleporter, and fireworks. This is from the flashing of colors more than anything about the game world itself. Movement isn’t enjoyable, not even in one of the multiple vehicles. The player can use various guns, a cannon, and a gravity gun. Since the game thinks the term “gravity gun” is common enough to use without explanation, I will say that it picks up and throws objects. That these guns, both realistic and fictitious, are boring to use is a big strike against any game’s physics system.

Nextgen Sandbox is a limited playground that is not inherently fun to play in. It has a few easter eggs outside of the achievements which are not worth scouring the environments for. Assuming the achievements are finished, though, the game unlocks a short horror game which, though buggy and very dark, I managed to finish. The game says one of the buttons turns on a flashlight; no flashlight could be turned on. The game includes a chase by a chainsaw-wielding madman; without dash, I could only walk up to a truck to attempt escape before dying. The game includes items that are not in the sandbox proper and character interactions which cannot be scripted. The horror game emphasizes how limited this game as a whole is. It includes an implied murder, a ghost, and a number of bodies inexplicably hanging from a tree, all of which, I assume, kicks the rating up to M. Much like the game as a whole, it’s a fun little diversion that seems more suited to a sample Unreal project than a finished product. 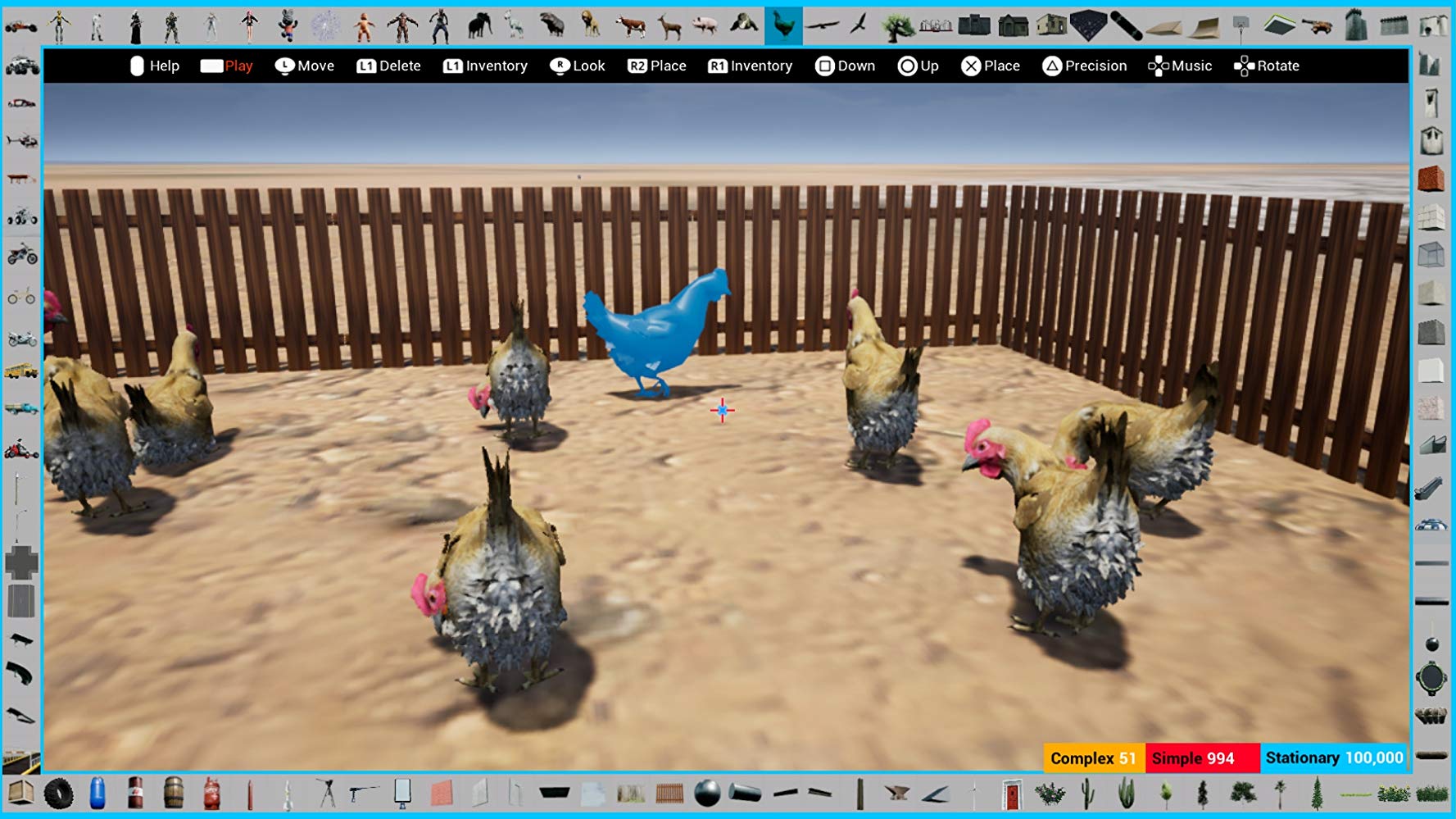 There is little to be said about the graphical fidelity or the sound design of Nextgen Sandbox. Most of the assets, I gather from the credits, might be found online from one of the many people credited by their creator handles. The controls are passable but not precise enough to click sides of walls together. The sounds and music are generic. The horror elements aren’t good, exactly, but what’s there is enough to advise that parents keep young children away from the bonus game.

Nextgen Sandbox gives you large, empty playgrounds and little to do in them. There is little in the way of production values to commend it, and other tools give more freedom and room to learn. As a stand-alone product with no export ability, I can’t recommend Nextgen Sandbox.