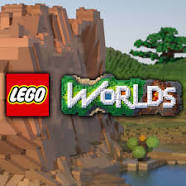 Thank you Warner Brothers Interactive Entertainment for sending us this game to review!

My kids and I have been enjoying LEGO Worlds since Early Access. It has changed a lot and has added multiplayer support since its debut on Steam.  While it has a different online experience than Minecraft, there are many similarities between the two games.    In both titles, you have to be wary of the various unfriendly and usually undead monsters that come out at night.  There are also several different biomes, though LEGO Worlds has unrealistic candy themed areas that I wish existed in real life.  Instead of Creepers, LEGO Worlds has cute little green monsters called Trouble Makers that run around with unique LEGO pieces that you have to tackle them for.

There’s not much of a story in LEGO Worlds, but if you’ve seen the LEGO movie you’re familiar with the term Master Builder, and your goal is to become one of them.  In order to do so, you must collect gold bricks though various quests and Trouble Makers.  As you collect more and more pieces you’ll level up and collect rewards like a camera, a brick gun, and a jet pack.  You’ll also be able to discover more worlds in deeper space as your ship gets upgraded with more and more gold pieces.

One of the first tools available to you is the discovery tool, which is used to examine and unlock items to make them available for use.  Some items you’ll be able to scan right away while others only become available after a quest is completed.  The appearance of the quest giver also becomes available after completing a job so be sure to scan them afterwards!  In the beginning, your appearance is limited to a spaceman/space woman.  As you explore more worlds, you can change into a pirate, construction worker, witch, ginger bread man, skater girl, and so on. 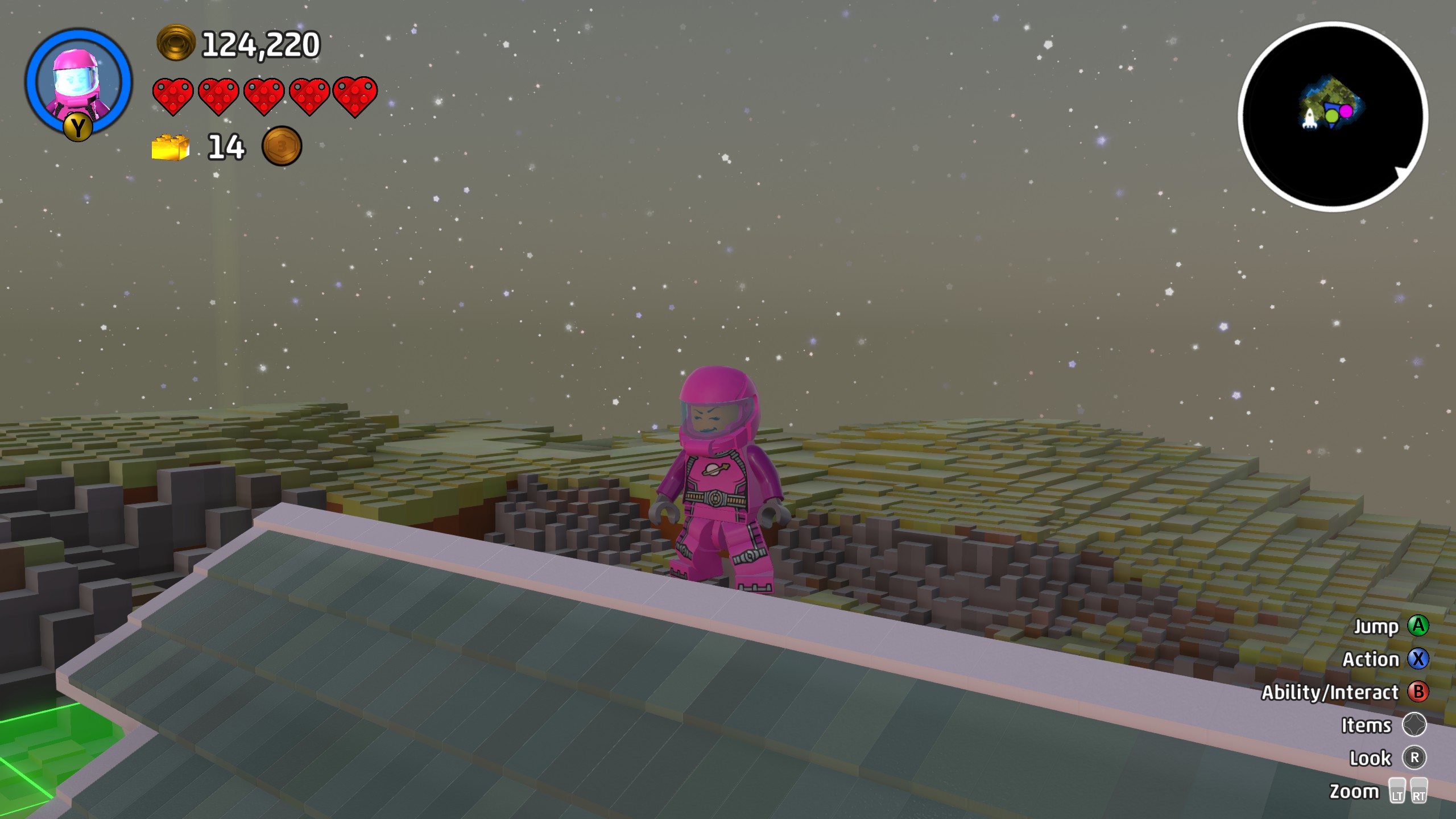 Strong Points: Lots of randomly generated worlds to explore; gather resources and collect gold pieces to be the become the best Master Builder in the universe
Weak Points: My resolution kept getting reset to 800x600; some game stuttering as my 290x videocard was getting put through its paces
Moral Warnings: Cartoon violence; hostile undead creatures including skeletons and zombies come out at night

Animals are ridable, but to make them friendly you’ll have to give them the treat they’re thinking about and showing in their thought bubble.    You can befriend and ride bulls, cows, dinosaurs, eagles, gorillas, horses, pigs, wolves, and even fantasy creatures like dragons.   Once a creature is unlocked, you can spawn them in a completely different world/biome.

The key to success is exploring and unlocking everything.  I often had to go back to a previously visited world to bring back requested items that were not available there.  Besides fetch quests, there are also favor based ones.   These include helping trapped characters, or painting/building various items for them.

When it comes to building things, you can do so brick by brick or by copying and pasting designs.  You can also use blueprints you find to instantly erect various structures.   Terraforming the environment to your liking is possible using the build tool to flatten and raise land as you see fit.

With endless possibilities, you would assume that the quests would have multiple solutions.  Sadly, many of them don’t.  Instead of terraforming, I opted to remove the bricks in the way and reunite the characters, but the quest didn’t trigger as resolved until I tried to start it again with my solution already in place. 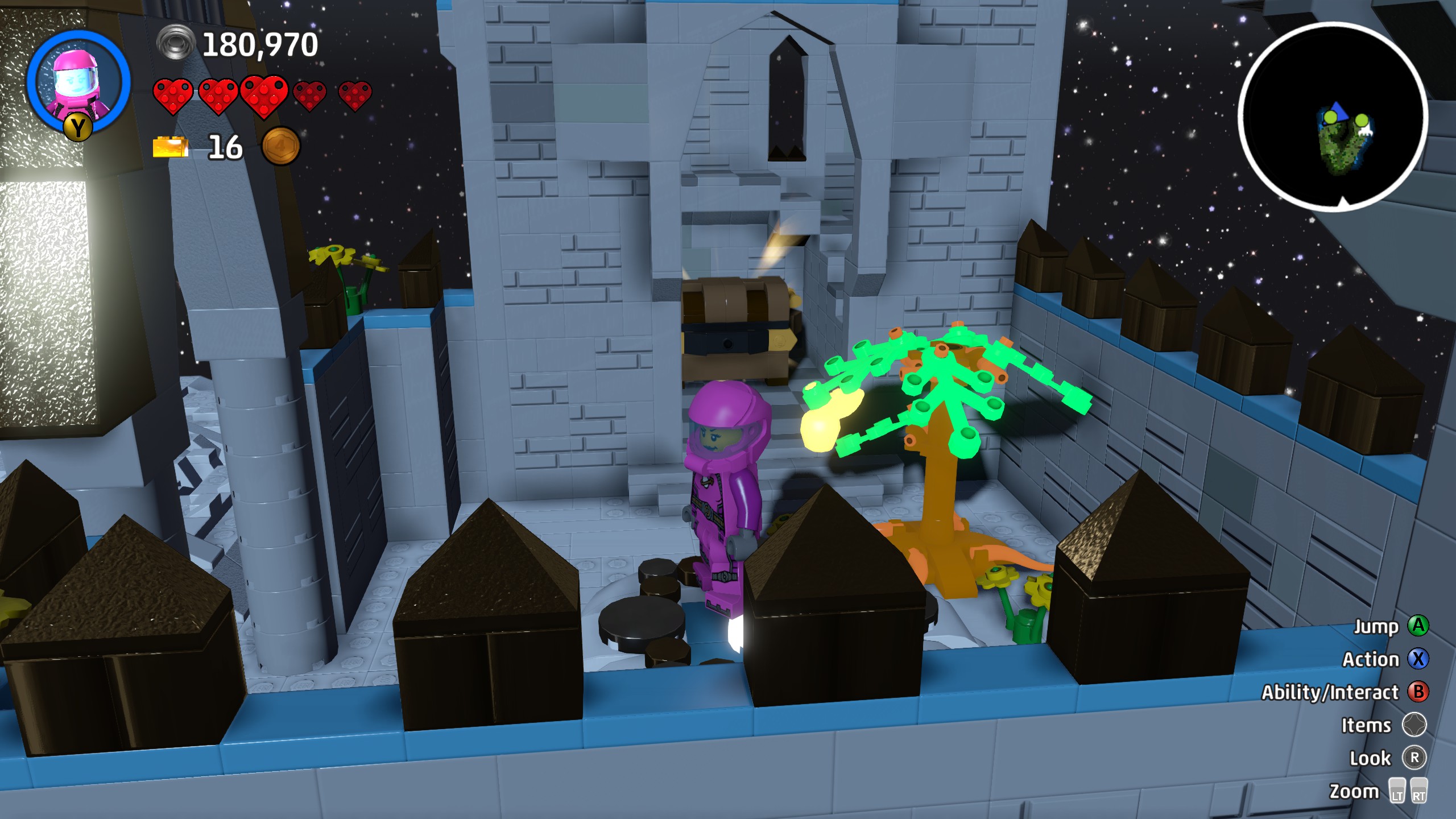 Another annoying quest was to gather five cows (before I had them unlocked after visiting another world).  I had a couple of cows and I scoured the tiny world to bring more back only to find the ones I already brought either jumped out of their pen in fear of or were killed by the nearby snake.  To make matters worse, instead of removing the snake with my discover tool, I accidentally removed one of the cows I worked so hard for!  The moral of the story is that it’s worth your while to come back to finish quests sometimes.

Some quests rewards are able to be claimed numerous times despite doing the quest only once.   If there’s a gold brick involved you will only get one though.  Another odd glitch that I experienced is that my display resolution would often reset to 800 X 600.

Despite the glitches and drawbacks, I still enjoyed my time in LEGO Worlds.   My kids enjoy it to and it’s neat that they can hop into each other’s worlds now too.  If you don’t mind zombies, skeletons, vampires, and witches, this game is pretty family friendly.  When an NPC gets attacked by a hostile creature they’ll break apart into bricks upon their demise.

If you’re tired of spending hundreds of dollars on physical LEGOs, you may want to invest in this $30 game.  There’s plenty of digital LEGOs available without having to search for the one piece buried in thousands.  You also won’t have to worry about stepping on or vacuuming up unused pieces. In the end, LEGO Worlds is a perfect fit for fans of LEGOs and Minecraft.