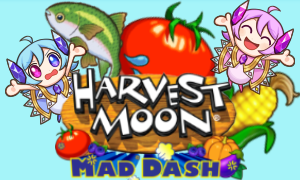 Thank you Natsume Inc. for sending us this game to review!

Harvest Moon: Mad Dash begins with a young boy and a girl being told what to do by the Harvest Goddess to restore their island to its former glory. Whichever character you choose, they will have to harvest lots of crops and collect eight time seeds and bring them to the broken down lighthouse to revive it.

Each level is timed and you earn points by harvesting crops whether they are in demand or not. On the bottom of your garden(s) you’ll see the requested items to aim for. Some levels have you taking requests based on what a dog is thinking about! In order to harvest items, you’ll have to pick up and combine similarly colored sprouts which come in different shapes. You can rotate them Tetris style to make them fit in various positions. After enough seedlings are grouped together, the produce will quickly grow and be ready for harvesting.

Planning ahead is possible but difficult since the vegetables will wither away if not harvested fast enough. Along with carrots, corn, eggplant, peppers, tomatoes, and more you will also have to catch fish and milk cows.

Some levels have you managing one garden while others have multiple gardens. Often times you’ll have obstacles to steer clear from like barrels, wild boars, and lava to avoid making contact with as you go about your business. If a boar collides with your character, they will be stunned for a few seconds.

As you gather fish, produce, and milk you’ll increase your power gauge. Once the gauge is filled, you’ll enter into a power frenzy mode where all of the produce is ready for picking no matter how many squares are adjacent to each other. 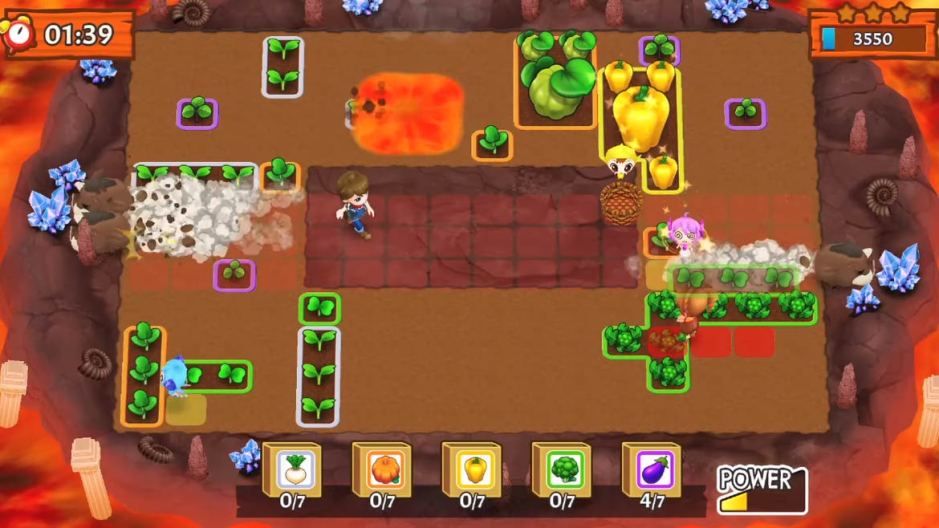 Earth energy is earned as you complete levels and you can spend some of it with level modifiers that have to be enabled at the start of each level. For example, you can add thirty seconds to the clock or increase the power gauge’s fill rate by 20%.

Progressing in this title is done like many mobile games I’ve played. Depending on your score at the end of each level, you’ll be awarded between one and three stars. Areas in the map will unlock as you meet the required number of stars. Replaying levels for a better score/more stars is always an option if needed.

My biggest complaint about this game is the price. It looks, plays, and feels like a mobile game, but it’s way more expensive than one. Sure, there are dozens of levels, but many of them are less than a couple minutes long. You may get around six hours of play time total. If it was on a mobile platform, $4.99 would be a reasonable asking price. $30 is way too much. If it goes on sale it’s definitely worth picking up though.