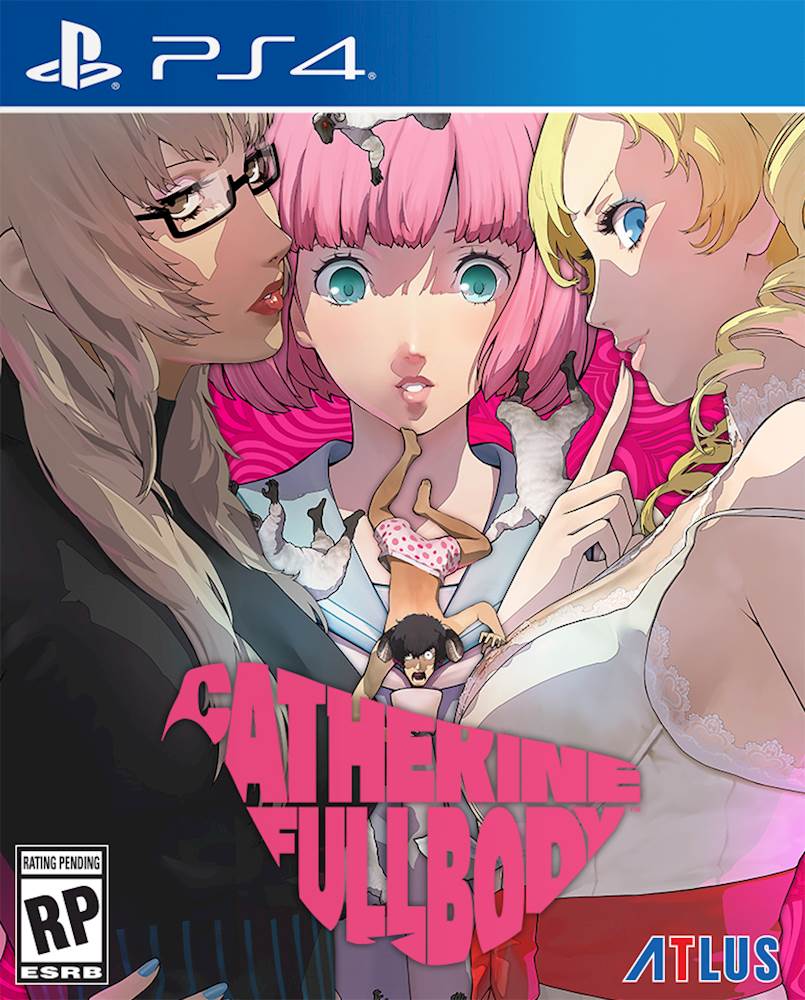 Catherine Classic was originally released in 2011 and received positive reviews and sold over one million copies. Catherine: Full Body builds upon the first game and adds new game mechanics, characters, puzzles, and even more endings. Instead of a love triangle the original game had, Full Body provides a love quadrangle and eighteen different endings.

Vincent Brooks is a thirty-two year old man who has known his girlfriend for fifteen years and has been dating her for five of them. He’s comfortable with her but her parents are pushing for them to marry. Between relationship pressures and his new job, Vincent is having some strange nightmares where he has to move blocks and climb to the top, or die trying.

As it turns out, this is a shared dream by those in Vincent’s neighborhood and local bar.  Rumor has it that the people suffering from this nightmare have been cursed and put there intentionally by a witch.  Those who die in this dream never wake up in real life.

Strong Points: Great music, voice acting; interesting characters
Weak Points: Odd story
Moral Warnings: The story revolves around lack of commitment, sex outside of marriage; unfaithfulness; drunkenness; cigarette smoking is also shown; revealing clothing that shows off cleavage is worn; animated rear ends are shown too; every curse word and blaspheme is uttered in this title; blood and violence is shown; transgender characters; Ishtar mentioned; confession is part of the game and Bibles are used to remove enemies

Vincent’s story is broken down into nine days/nights. During the day, you’ll see him at work or spending time with his girlfriend, Katherine. His nights are usually spent at a bar called The Stray Sheep. Vincent can drink and talk to his friends and fellow patrons. Usually after some talking or drinking, Vincent’s phone will notify him of an e-mail from different love interests. Catherine is a blonde bombshell that he met at the bar and often wakes up to despite not remembering inviting her over for the night. Qatherine, that goes by Rin, is an amnesiac that Vincent helped find a job (at The Stray Sheep) and home (next door to him).

Unlike some of his friends, Vincent is not a player and feels bad about hurting his longtime girlfriend. Many of the guys partaking in the same nightmare are unashamed cheaters. In fact, Vincent knows some of them from the bar! Identifying them outside of the dream is tricky since everyone but Vincent appears as a sheep and they all forget about the dream when they wake up. In the dream, Vincent has ram horns and wears white and pink polka dot boxers and carries his pillow with him.

When it comes to the puzzle portion of the game, Catherine: Full Body has many welcome additions. The easier difficulties change how difficult the nightmare levels are. If desired you can even have the puzzle levels auto-play so you can sit back and focus on the story. The moveable blocks can be square-shaped or have various shapes in Remix mode for added difficulty.

If you’re into multiplayer you can challenge players in the Colosseum or go head to head or play co-op in the Online Arena. Other than going for alternate endings and harder difficulty levels, more puzzle solving can be had in the Babel puzzle challenges.

The puzzles are fun and I enjoyed the levels where I was not rushed for time while being chased by some hideous creature. As you get further in the story, new block types will show up including crumbling, immovable, bomb, trap, ice, spring, and black hole blocks. Piles of gold coins and bricks are also available and if collected will bump up your final score at the end to determine the prize of a gold, silver, or bronze trophy. Money earned can be spent on a handy item to carry with you to the next level. Since you can only carry one item at a time, you’ll have to choose wisely. The Bible is handy since it can clear away nearby foes. The ability to summon your own block is quite useful too!

Be sure to save your progress between levels and talk to the other sheep. Some of them will show you new techniques to help improve your climbing skills. The video explanations are quite helpful. At the end of each level, you’ll have to go into the confessional and answer various questions like “Does life begin or end with marriage?” The answers to these questions determine the ending you’ll receive. I like how the answers are compared to others if you have the online mode enabled. Most of the time, my answers were with the majority.

I haven’t played the original version of Catherine so I can’t comment on how different or much better this edition is. The refined visuals look good. I like how the game switches from 3D-rendered to anime cutscenes. The voice acting is well done. Apparently, they got all of the original voice actors to reprise their roles for this game which is cool. Rin’s piano playing is quite good and the calming music is helpful for the stressful nightmare puzzles.

From a moral standpoint, this game falls flat. Every curse word and blaspheme possible is used multiple times. The sensual and horrific visuals add further reason not to play this game around children. The intro movie shows two cartoon female rear ends. No other body parts are fully shown though a good amount of cleavage is displayed. There are many adult topics like marriage, commitment, pregnancy, and unfaithfulness discussed throughout the game. Ironically, many of these topics are non-issues for those who follow God’s plan of saving intimacy for after marriage and being faithful to your partner. Though there are Christian references, there is also mention of the Babylonian goddess Ishtar.

Without spoiling too much, it is worth noting that this game has some LGTBQ themes. Love is love despite gender is one of the messages promoted. There is at least one transgender/cross dressing character.

The main story took me roughly seven hours to complete. Given the many moral issues and messages promoted in this game, I don’t plan on pursing the other seventeen endings. The puzzles are fun when allowed to complete them at my own pace. I can see why many enjoyed the original game, but I can also see why it got a Mature rating from the ESRB.