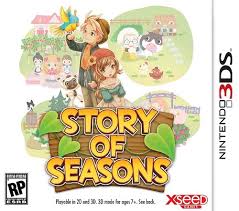 Although Story of Seasons has the same producer as Harvest Moon, Yoshifumi Hashimoto, the title is owned by Natsume and XSEED does not have rights to it.  Fans of Harvest Moon will find many similarities in this game.  Despite beating Rune Factory: A Fantasy Harvest Moon, I have yet to play a classic Harvest Moon game.

While Story of Seasons doesn't have any monsters to slay or bosses to beat, there is still plenty to do.  The game begins with your customizable character responding to a small town's ad for a new farmer.  As a city dweller, the farming life is new to you, but you're willing to give it a try.  The locals are pretty friendly and many of them are single if you're interested in settling down and starting a family.  While you're cute, the town still needs you to contribute towards its growth so you'll have to learn how to be a competent farmer.  An elderly farmer happily takes you under her wing to teach you the basics of planting, harvesting, and caring for animals.   After a week with Eda, you're given a rundown house, old tools, turnip seeds,  and a cow to get  you started on your new rural adventure!

Before you can plant those turnip seeds you must till the ground with the old hoe you were given.  If there are trees or rocks in the way, you'll have to break them down with an axe or a hammer.  All of these activities take energy and your character only has a limited amount of it.  Fortunately, it can be replenished by eating.

Food in this game can be grown, fished, home cooked, or eaten at a restaurant. While eating out can fetch you some good recipes, it can be expensive.  If you want a slight break in the prices, you may want to play at the Seedling difficulty level.  There's no shame in that, I played as a seedling.   Even at the seedling difficulty, the most expensive wedding plan costs one million dollars. 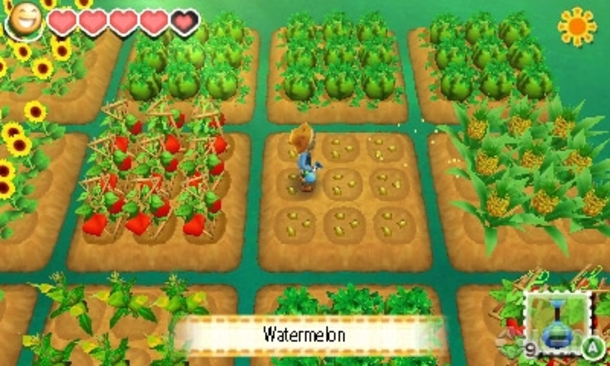 Strong Points: Plenty to do between farming, dating, designing clothes and pottery; easier farm management; multiplayer mode allows players to trade with and help their friends online
Weak Points: Characters can be rather dull with repetitive and generic phrases, as a result romantic relationships are very one-sided in the beginning
Moral Warnings: Wine references and spouses suggest bathing together to help unwind; a goddess eventually moves into town and appreciates offerings made to her; some magic used by a witch

To beat the game and see the end credits, you have to settle down and get married.  You can continue playing the game after getting married, in fact; it's encouraged as you can have children with your spouse.  Before your family can expand, you have to have a fully upgraded two story house.  The blue print alone is $350,000 and then there's the dilemma of finding the materials for it.  The black lumber needed for the house can only be scavenged and is hard to come by in the winter time.

I like how each season has their own theme song to go along with it. All of the songs are good and I can't pick a favorite.  Seasons last thirty days and many crops will only survive for one season.  Most crops need to be watered daily, but bushes and trees do not.  To increase your crop's quality you can buy and apply fertilizer daily.  There are many animals that you can raise and the more time and effort you put into them, the better their products will be.  Happy chickens will produce better eggs and content cows will give you higher quality milk.  There are many contests throughout the year and if you win them, you will be able to get a premium price for qualifying products.  These contests are a great way to meet and score friendship points with the locals and eligible singles.

Depending on your character's gender, there are several eligible bachelors and bachelorettes to win over.  The age ranges of them are quite broad and I assume the younger eligible mates are there for younger gamers and not pedophiles.  Each potential mate has their own tastes in gifts and unique love story scenes that you can witness after earning enough relationship points with them.

You can tell where you stand with people by the color of the flower on the left hand side of their dialogue box.  If you don't see a flower there yet, you have a long way to go.  Another way to check your status is by pressing the left trigger on the 3DS  while talking with them.  Different emoticons will show up above their head depending on your relationship level.

The controls have a little bit of a learning curve, but are easy to navigate through once mastered.  Harvesting crops is typically done by pressing the A button while standing next to the produce ready to be picked.  Some items like wheat and soy beans need to be harvested using the sickle and it's mentioned in the description of the seeds.  The only item I had difficulty harvesting was fruit from trees.  The game's built in library and instruction manual neglected to mention that you have to jump by pressing the B button and then quickly pressing the A button to harvest the fruit. 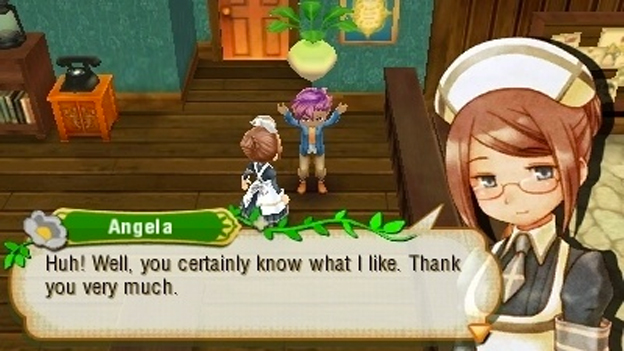 I like how the crops gradually grow in the fields and they are easy to distinguish from each other.  Some crops are easier to tell when they are ready to be harvested than others.  To be on the safe side, be sure to save your progress before using a sickle on your crops.

Besides the crops being detailed, the characters in the game are nicely animated and their dialogue appearances change appropriately to their moods and feelings.   The game world feels very much alive with leaves, seeds, and bugs flying in the air.  When it rains, tree frogs and toads will come out and in the summer time there are lightning bugs to catch at night.

With life comes death and not only can your plants die in this game if neglected, the farm animals can perish as well if they are not properly cared for.  One of the characters in this game will die and it's unavoidable.  While the town's mayor says this person is now looking down on people, there is no mention of God or town church in Story of Seasons.  Later in the game a young witch moves in and builds her home and tweaks it with some fairy-tale like magic. In the second year of the game a young goddess moves in and gives your character a tutorial of how to get married in the game.  This goddess also hints that she appreciates offerings made to her at the lake she resides in.

Despite the boring process of courting, marriage is a bit more exciting in this game. You can enjoy mealtimes with your partner and even have them do the cooking!  At dinnertime my husband (Raeger) would suggest taking a bath together to help unwind.  While there was a usable bathroom in our house, I never got to see anything behind the door.  The last issue worth noting is an alcohol reference made by my spouse during a fireworks show that a glass of wine to sip while watching the fireworks would have been perfect.

Story of Seasons is a charming game that can be enjoyed by kids and adults alike.  Besides farming, your character can craft and sell items in a shop.  With multiplayer connectivity you can have players visit and tend to your farms.  Guests can help fertilize your farms while friends can trade back and forth with your town.  There is so much to do in this game that even with over fifty hours under my belt, I have barely scratched the surface of all that this game has to offer.  I can say this though, there's a lot of replay value in this title and you're bound to get your money's worth if you buy it.