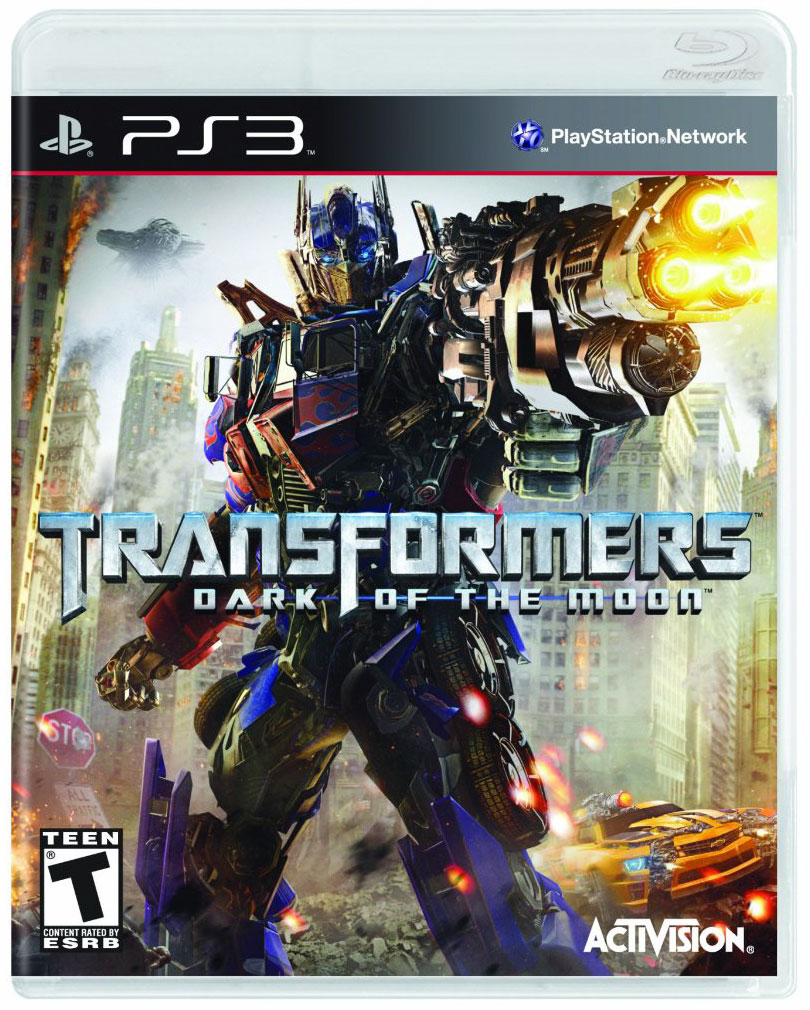 The story of the game, unlike the previous games, doesn’t actually take place during the movie. Instead, the game precedes the third movie and explains how certain things in the movie came about. In the game, the Decepticons (the bad robots) are trying to unleash their top assassin Shockwave while uncovering information about a mysterious moon project that happened long ago. If you’ve seen the movie, you know where this leads. The Autobots (the good robots) are once again one step behind the Decepticons. They need to figure out what they’re doing and stop them. Though I like the idea of making a prequel, the game doesn’t have enough story.

Sticking to the formula that made the War for Cybertron games so great, Transformers: Dark of the Moon is a third-person shooter(meaning your character is on the left side of the screen). Because of this, I will be making more comparisons to the War for Cybertron games more than the other Transformers film games. Though there are some improvements from War for Cybertron, some things actually get worse. For example, aside from the final level, the game doesn’t allow you to quick step (perform a slight dash to whatever direction you’re heading). This makes you move a lot slower. Also, it’s quite confusing that the controls are changed. Instead of R1 to fire and L1 to zoom in the camera, you press R2 to fire and L2 to zoom.

There are some improvements to the gameplay such as the ammo and special abilities. Unlike the War for Cybertron games, you never run out of ammo. Though you have a meter that depletes as you shoot, you can always reload, so you never have to worry about not being able to shoot. I also like the inclusion of special abilities. Each character gets two abilities that help you fight enemies or defend yourself. The L1 and R1 buttons activate these abilities. Every time you use one, it has to reload. The reload time varies depending on the ability. The special abilities add variety to the game. 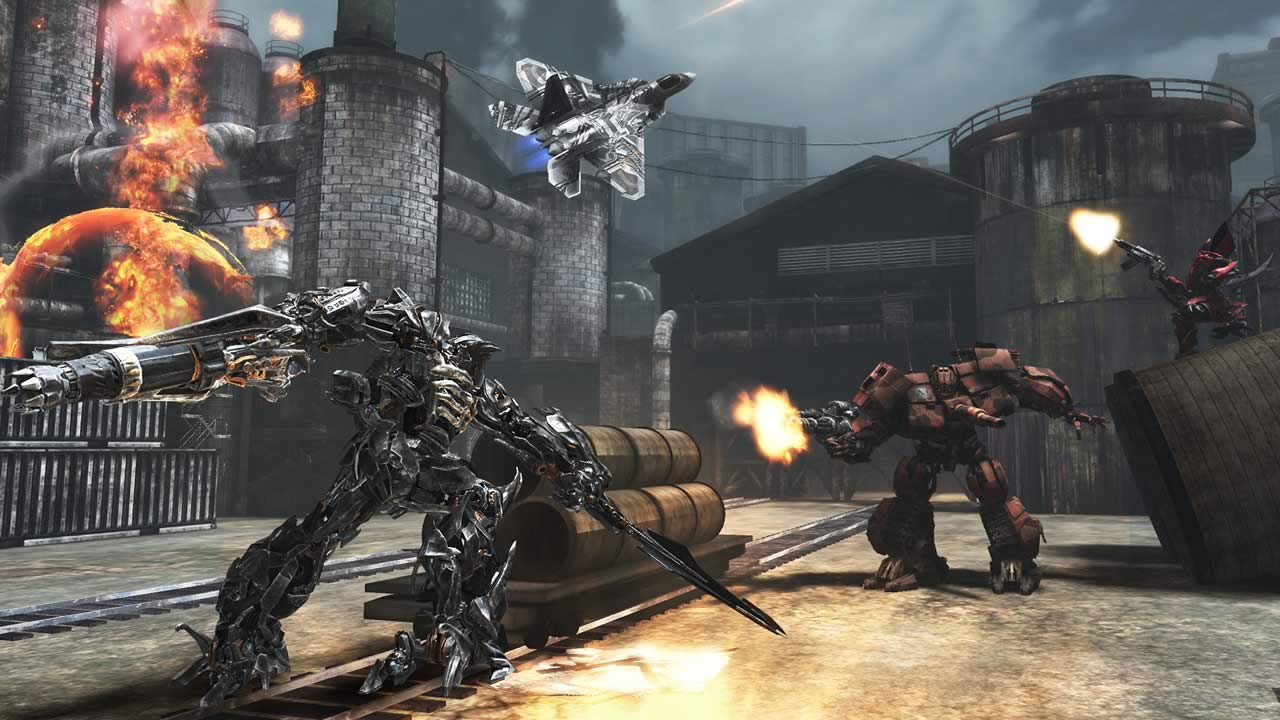 The graphics, for the most part, are an improvement over the dull-colored War for Cybertron game. Being on Earth, the level design gets significantly more colorful. Compared to the previous movie-based games, the gameplay graphics are as good as (possibly better than) the HD version of Revenge of the Fallen.

Sadly, even the graphics have their flaws. For the most part, they are really good and detailed. Though I love the in-game graphics, there are certain cinematics that feature Autobots talking to humans through a computer. In these cinematics, the Autobots lack detail, making them look hideous. In those same cinematics, the army men are played by actors, as opposed to CG models of humans. Though the army men in the game are not in the movie, I found it interesting to see actual humans in a game. I wish they had made better models for the Autobots so that they fit better with the live-action humans.

The music is pretty good. With an orchestra and choir, the music sounds very similar to what you would hear in the movies. However, the only song that stood out to me was the one that plays in the main menu. This is because during the game, the action gets so intense that I wasn’t able to pay attention to the background music much.

The voice acting is great. Peter Cullen, as with the other games, reprises his role as Optimus Prime. Other than the voice of Ironhide (who is played by Jess Harnell), all the other voice actors from the previous movie-based games are replaced, generally by the voices in the War for Cybertron games. Fred Tatasciore’s performance as Megatron was a significant improvement from the previous voice. Perhaps the biggest improvement was that they took away Bumblebee’s voice from the second game. What seemed strange about this new cast was the voice of Starscream. In the previous games, he was voiced by the actor in the film, Charlie Adler. In this game, he is for some reason voiced by Steve Blum, who voiced Starscream in the television seriesTransformers: Prime. Though I like his acting in the show, I wish they had gotten Charlie Adler to reprise his role since he played Starscream in the movies. 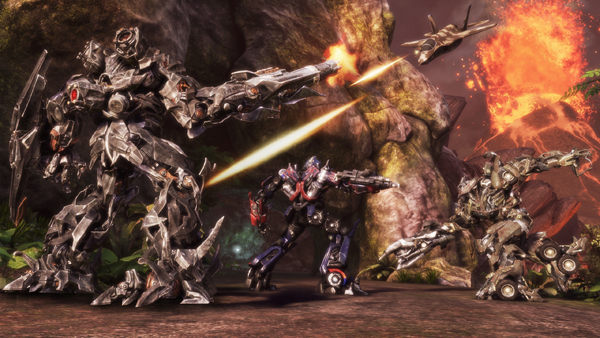 One thing I found quite humorous about the game was Optimus Prime’s dialogue in the final level. Most fans know that the modern versions of Optimus Prime have no character. Though through most of the game he has the typical characterless personality, he talks trash in the final level! While fighting the final boss he says things like “Back for more, huh?” and stuff of that nature. This is very out of character for him. Some die-hard Transformers fans would complain, but I found it enjoyable to see him taunt someone.

Transformers: Dark of the Moon is T for violence. This seems reasonable considering the amount of action in the game. If you punch an enemy, blue blood will splat on the screen. At times you play levels where you’re the villain killing good guys. As far as I can tell, no humans die; only Autobots. One thing ESRB’s rating doesn’t mention is the slight language. In the level where you play as the character Ironhide, one of the humans tells Ironhide to “give them H*ll.” Though the game is rather dark, it is fortunate to know that, like the previous games, the moral content isn’t nearly as bad as the films.

Transformers: Dark of the Moon may not be as good as the War for Cybertron games, but it is a great film-based game. Its length would still make me hesitant about paying around $40-50 for it, but if you’re a Transformers fan and could find a cheap price for it, I would highly recommend this game.